Investigators on Monday positively identified the boy found dead near a Las Vegas hiking trail last month and launched a nationwide search for his mother, who is wanted in his murder.

Investigators have positively identified the boy found dead near a Las Vegas hiking trail last month and launched a nationwide search for his mother, who is wanted in his murder.

Spencer said that investigators were able to link the homicide case to a missing person’s case out of California with the help of the San Jose Police Department.

A family friend had recognized the composite sketches released to the media and alerted San Jose police on Friday that the boy might be Liam Husted. She said she had not seen him or his mother in over 2 weeks.

Liam’s father also made a report to police on June 1 after not hearing from his son or Moreno Rodriguez. He did not believe his son was in danger at the time and did not want to file charges against Moreno Rodriguez.

Spencer said the father is not a suspect in the case.

The child’s grandfather, Chris Husted, told FOX5 Las Vegas that his family was distraught after learning the tragic news.

“It is a complete tragedy and Liam will be very missed,” he said. “My son is very distraught by the news. Liam was a special needs child, at a disadvantage and dependent on others’ kindness. Unfortunately, his mother took that away.” 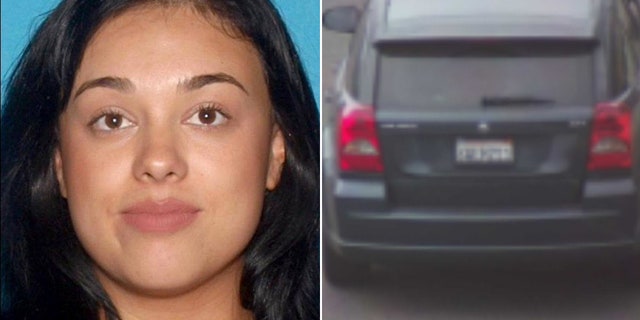 Moreno Rodriguez was last seen checking into a room by herself at a Denver-area hotel on May 31. She was driving a 2007 dark blue Dodge Caliber.
(Las Vegas Metropolitan Police Department)

Investigators learned that the mother and her child were last seen in the San Jose area on May 24 driving a 2007 dark blue Dodge Caliber that Spencer said was packed full with belongings.

They were able to track her movements to Laguna Beach, Calif., on May 26 and then Victorville, Calif., later that afternoon.

On the morning of May 28, a group of hikers discovered Liam’s body, which went unidentified for 10 days, on the Mountain Springs Trailhead near Las Vegas.

Moreno Rodriguez’s vehicle was then seen traveling on I-70 near Grand Junction, Colorado, on May 29. Moreno Rodriguez was last seen in the vehicle on May 31, when she arrived at a Denver-area hotel and checked into a room by herself.

Investigators have asked employees of hotels or motels in the Las Vegas valley to check their registries on the days of May 27 and 28 to see if Moreno Rodriguez checked into their establishments.

The Las Vegas homicide section can be reached by email at [email protected] Anonymous tips can be provided by contacting Crime Stoppers by phone at 702-385-5555 or online at www.crimestoppersofnv.com.