Chief Medical Officer admits there have been local shortages of PPE

England’s Chief Medical Officer today admitted there have been local shortages of PPE but insisted nationally the UK has never been ‘under water’ on the supply of crucial kit for medics and care staff.

Professor Chris Whitty said that supplies have been ‘tight at different times for different items’ and sometimes it has been ‘very, very close to the line’.

But he stressed ‘at a national level we are not under water on anything’ as he suggested there is enough life-saving equipment to go around.

However, he conceded there have been ‘significant local pressures from time to time’ in an apparent admission that some hospitals and care homes have temporarily run out of key items.

His comments at the daily Downing Street coronavirus briefing came after military staff attacked the health service for the way it has been distributing the equipment.

Military personnel accused the NHS of ‘appalling’ handling of the issue with the army apparently pushing to be given a more prominent role in making sure gowns, gloves and face masks get to where they need to go.

They claimed NHS logistics were ‘knackered’ and questioned why certain items were not being rationed.

The supply of PPE has emerged as one of the key battlegrounds for the government amid fears shortages are putting frontline workers’ lives at risk.

Supply did receive a boost today after an RAF plane carrying a shipment of PPE from Turkey finally arrived back in the UK, with the materials supposed to have arrived on Sunday.

Meanwhile, the government has faced accusations of being slow to take up PPE offers of help from British businesses as millions of items continue to be shipped out of the UK despite domestic need.

Labour today claimed it had been told by dozens of UK companies that offers of help on PPE had been ignored by ministers. 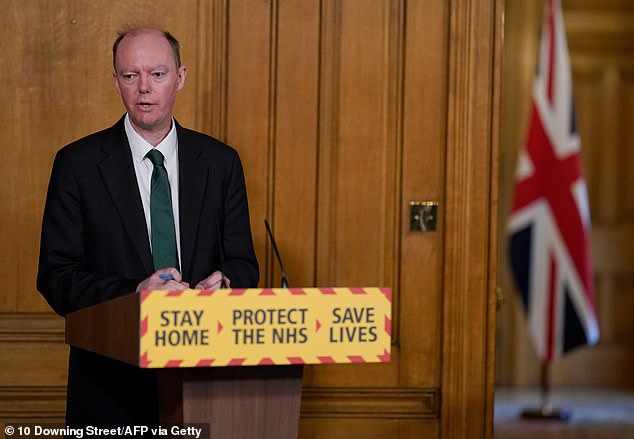 Professor Chris Whitty today insisted the UK does have enough PPE for frontline workers but admitted things have been ‘very, very close to the line’ 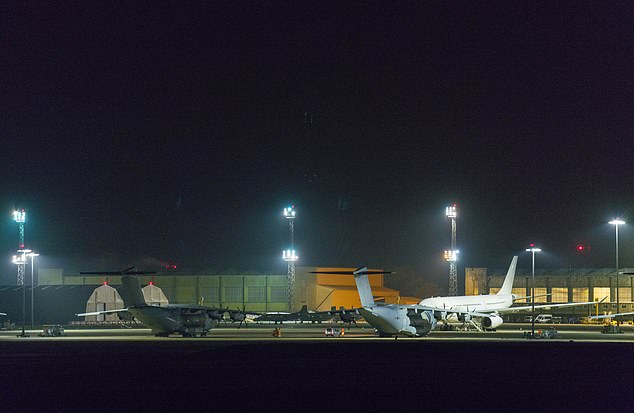 Prof Whitty today insisted the UK does have enough PPE but admitted there have been allocation issues which have resulted in some facilities being left without what they need.

He said: ‘It is very clear that at the moment we are tight at different times for different items of PPE.

‘It is not everything at all times, but different things at different points have been very, very close to the line.

‘Of course, when you are close to the line, inefficiencies in any kind of part of the system tend to lead to local stock-outs so if you are very heavily overstocked that is less true and this is why the support from the armed forces has been so critical to trying to reduce this.

‘At this point in time we are still close to the line but at a national level we are not under water on anything that I am aware of and I keep quite a close eye on this because I care very deeply about this as do all members of my profession.

‘But of course there may be local issues and I am aware of them from my colleagues along the way and all of us want to be in a position where there is a sufficient excess over a long period of time that this can all be balanced out.’

Citing examples of hospitals and care homes sharing their resources, Prof Whitty said the UK had managed to avoid ‘getting to the point where we are no longer able to cope with it’.

He said he was unable to say when the UK will have a comfortable excess supply of PPE but added: ‘We have managed to keep just ahead at a national level with some significant local pressures from time to time.’

Military planners who are experts in logistics were sent out to different parts of the country by the Ministry of Defence in the early stages of the outbreak to help ensure vital supplies were appropriately and swiftly allocated.

But military sources have suggested that the NHS distribution network has seen PPE being sent to hospitals without fully taking into account need.

That has meant some hospitals have ended up with more than they need while others have been left with a shortage.

Military commanders are thought to be frustrated that the so-called Covid Support Force which can call on 10,000 personnel and has disaster response planning expertise has not been put in charge of PPE distribution.

An RAF plane carrying a delayed consignment of PPE from Turkey finally landed in the UK this morning – but is only carrying up to half the promised 84 tonnes of life-saving equipment.

The jet is one of three that have been waiting for days for the go-ahead to pick urgently needed medical clothing and equipment, including 400,000 gowns made by Turkish suppliers.

It is not known how much of the consignment has arrived today, but the RAF Atlas is believed to only have capacity for 40 tonnes. After the jet touched down, three pallets were seen being unloaded onto the tarmac.

The government promised that the cargo would arrive in Britain on Sunday and it when it didn’t the RAF plane was sent to pick it up.

It didn’t land in Istanbul until Monday, at 9.10pm local time.

Fury over coronavirus PPE shortages is escalating amid claims the government was ignoring offers of help from businesses – and millions of pieces of PPE are still being shipped out of the UK in spite of the lack of equipment for NHS frontline staff.

Reports suggested that the government missed out on 16million facemasks for the NHS after ignoring offers from two major firms.

A Ministry of Defence spokesman said: ‘The MoD understands just how challenging logistics can be, especially under current pressures.

‘Of course there may be frictions at a local level, but those same armed forces are doing everything possible to support their health colleagues. The MoD has full confidence in the NHS.’

The arrival of the RAF plane back from Turkey was a welcome piece of news for ministers as they struggle to boost supply of PPE.

But they are facing domestic criticism after manufacturers suggested conversations with Whitehall about ramping up production and supply of items like gowns in the UK only started in the last two weeks.

Adam Mansell, head of the UK Fashion and Textile Association, said: ‘We have started probably four weeks later than we should have.’

Reports overnight suggested the government missed out on 16 million face masks for the NHS after offers from two major firms were ignored.

The Guardian reported that infectious disease specialists Landcent said they could have delivered six million FFP2 masks for the NHS to use if the government had placed an order three weeks ago.

The firm said it only got a response eight days later – by which time the items had been sold to other countries.

Mr Schuster’s local MP, Labour’s Bill Esterson, confirmed he had contacted Health Secretary Matt Hancock to highlight the offer on March 27 but that he had never received a reply.

Labour today said it had been contacted by 36 British companies which had ‘not received a reply’ from the government after submitting offers to supply things like face guards, aprons and gowns.

Shadow Cabinet Office minister Rachel Reeves said in a letter to her counterpart in government Michael Gove: ‘You and your officials and those at the Department for Health and Social Care will be best placed to validate what capability and capacity these firms have, but as they have not received a reply after contacting the government, I wanted to ensure that the Cabinet Office was aware of them.

‘Of these firms, if just one, five or 10 were able to contribute to the national effort of ensuring that our NHS and care workers – and indeed anybody who needs to use some form of Personal Protective Equipment and clothing – could be better protected, or just one hospital or care home were able to access adequate supplies of the PPE they need, I know you will agree that that would go a long way and make a big difference.’ 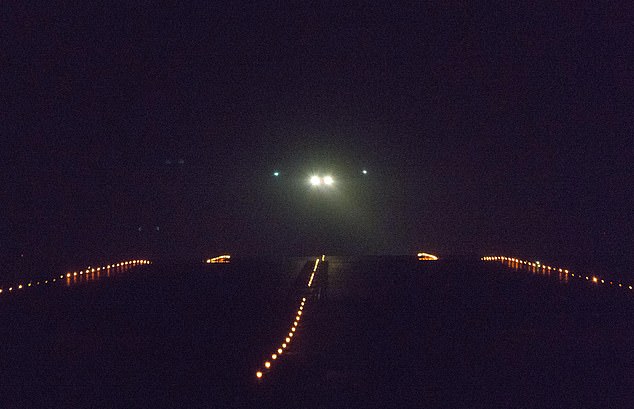 The Atlas A400 is spotted approaching the runway early this morning. It is only carrying up to half the promised 84 tonnes of life-saving equipment 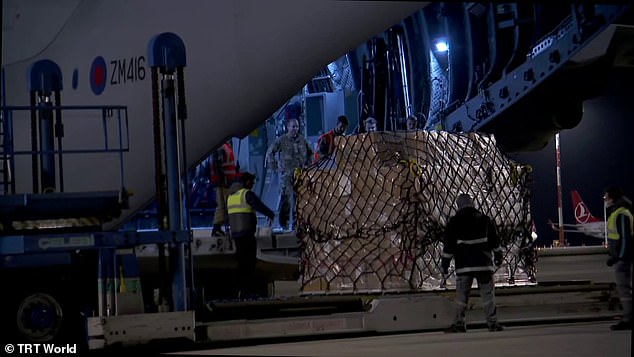 Mr Hancock announced yesterday at the daily Downing Street press conference that 8,331 companies had come forward with offers of PPE – some of which had led to ‘very large-scale’ purchases.

‘I am very grateful to all of those who have come forward and we are now actively engaged with hundreds of these companies,’ he said.

‘I can announce that we are working with 159 potential UK manufacturers which are starting to come on stream.’

Mr Hancock said the government needed to carefully consider all of the offers made to make sure firms can actually deliver on what they have promised.

‘We have had some offers, for instance, that have come from companies where, upon investigation, the company has only just been formed in the previous day or two before coming and asking for a cash deal with the government,’ he said.

The RAF plane carrying supplies from Turkey is believed to only have been stocked with up to half of the promised 84 tonnes of life-saving equipment ordered from Istanbul.

The delay in the arrival of the cargo had been blamed by the UK government on problems in Turkey.

But Turkish officials hit back and said there had been no hold up on their end, claiming ministers had only requested help with the shipment on Sunday.

The government is insistent that it is pursuing ‘every possible option’ to secure additional kit but unprecedented worldwide demand means the situation is ‘very challenging’.