Beijing: Less than three weeks after 21 people died amid freezing rain and high winds during a 99-kilometre foot race in northwestern China, officials said that 31 people would be held responsible and that the leader of the county in which the ultramarathon was held had died in a fall from a high-rise building.

Officials said that the county’s Communist Party chief, Li Zuobi, was primarily responsible for the race’s high death toll. Officials confirmed on Friday that Li had fallen to his death on Wednesday but the circumstances were not immediately clear.

Five employees of the company that organised the May 22 ultramarathon in Yellow River Stone Forest Park in Jingtai County, Gansu province, will face criminal charges, authorities said. Twenty-six local party officials have been disciplined, with measures including administrative warnings, loss of their jobs, detention and criminal investigations. 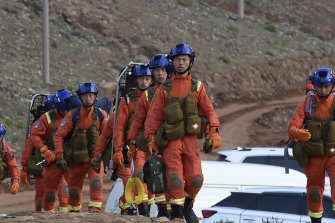 Rescuers walk into the accident site to search for survivors in Jingtai County of Baiyin City, northwest China’s Gansu Province.Credit:Xinhua

The swiftness of the investigation and the speed with which disciplinary measures were meted out and criminal complaints were prepared underline a consistent theme in Chinese politics in recent years: local leaders are quickly blamed when disasters occur.

When central authorities in Beijing want to show that they are taking swift action during a crisis, they often blame those on the ground. In the aftermaths of coronavirus outbreaks, coal mine explosions and other incidents, local leaders often lose their jobs or are subject to Communist Party disciplinary measures.

Jingtai County is on the northern outskirts of Baiyin, a desert copper mining town that has fallen on hard times in recent years after once rich veins of copper were exhausted. Baiyin has a national reputation for chronic unemployment and high rates of crime, including grisly murders of women and girls by a serial killer who eluded police for 28 years.

Jingtai County and Baiyin tried to improve their grim images by hosting the ultramarathon, with runners navigating shepherd’s paths through a dramatic terrain of golden mountains and sharp stone pillars.

But when freezing rain and hail fell on the race, 21 of the 172 elite runners died, including two of China’s top marathoners. Another runner is still in the hospital after being seriously injured. Runners were wearing little more than T-shirts and shorts.

China’s central government and its state-owned news media have suggested that local officials put profits over safety. But provincial government investigators were less harsh on Friday, describing a lack of planning.

The police in Baiyin received a call on Wednesday that a man had fallen from a building and later confirmed that it was Li, the county official. Li Ming, the deputy director of the Gansu Provincial Public Security Department, said Li’s death was not being handled as a criminal case, but he did not label it a suicide.

It is common for officials to be placed under surveillance or detained during initial investigations of disasters. Provincial officials did not say whether Li was being watched by the authorities at the time of his fatal fall, which reportedly happened at his home.

Beijing last week suspended ultramarathons and other long-distance races nationwide. The heavy loss of life in last month’s race has also prompted concern around the world about whether participants in ultramarathons should be required to carry additional clothing and other gear in case of inclement weather.