A plasterer came up with a novel way of hugging his grandmother while adhering to social distancing measures – by adding plastic sleeves to a shower curtain to create a ‘Cuddle Curtain’.

Mr Cauvin, who wanted to give his gran a hug after two-and-a-half months they’d spent apart during the coronavirus lockdown, then beckons her over to his contraption.

He made it by taking a see-through shower curtain and fitting it with long safety sleeves on each side – allowing two people to stand either side without skin-to-skin or breathing contact. 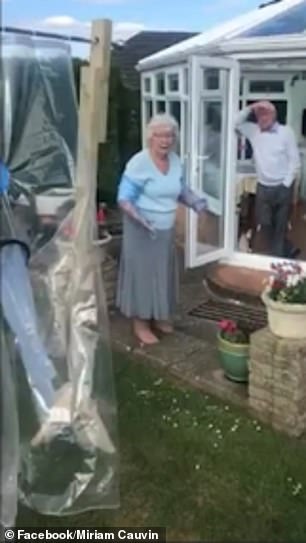 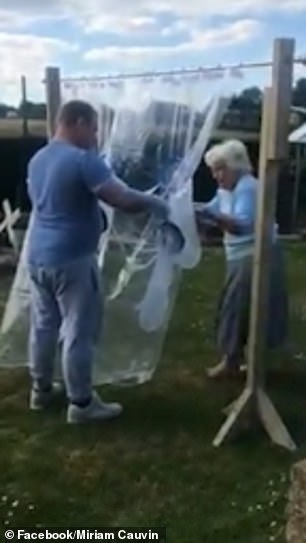 Plasterer Antony Cauvin, 29, from Stratford-upon-Avon, made a surprise visit to his elderly relatives’ garden last Friday. He brought along his invention so he could hug his grandma 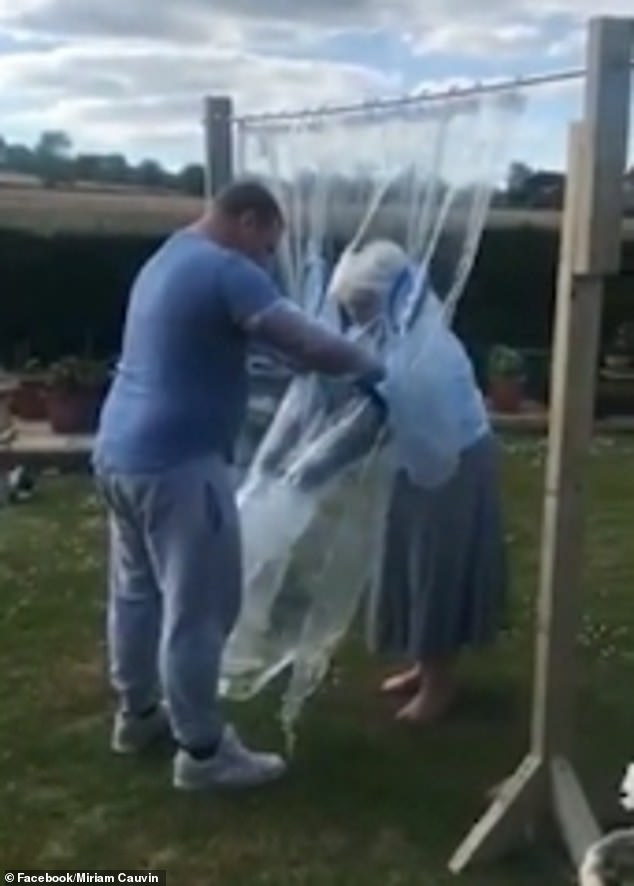 Footage shows Mr Cauvin, who wanted to embrace his gran after two-and-a-half months they’d spent apart during the coronavirus lockdown, beckoning her over to his ‘Cuddle Curtain’ contraption 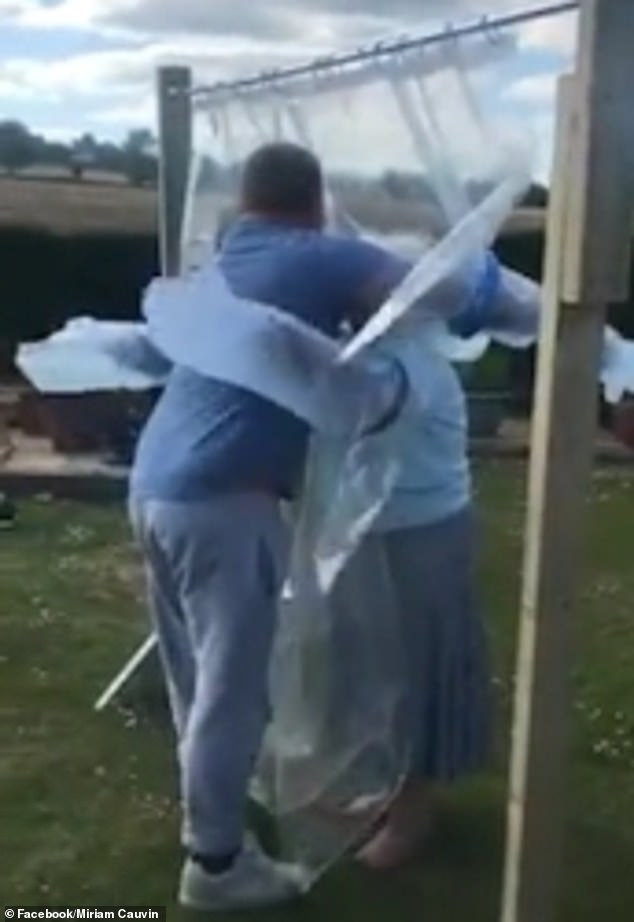 Mr Cauvin then tells her that she needs to put her arms through the bottom sleeves, while his go through the top ones as they prepare to hug

In the video, he tells her: ‘You’ve got to put your arms throught the bottom one, OK?. My arms go through the top one.’

With that, the two embrace for a short while. While his gran wiggles and laughs with glee, Mr Cauvin exclaims, ‘How amazing is this? I only designed them with you in mind.’

The footage, which he posted on his Facebook page, has so far garnered more than 4.2million views.

Mr Cauvin tested his ‘Cuddle Curtain’ on his wife, Miriam, 27, before taking it over to his grandparents’ house.

He constructed the £70 device from a shower curtian and sleeves intended to prevent plaster casts from getting wet.

‘My family is very close and my nan is the matriarch of our family. She has three children, eight grandchildren and three great-grandchildren,’ Mr Cauvin told The Sun. 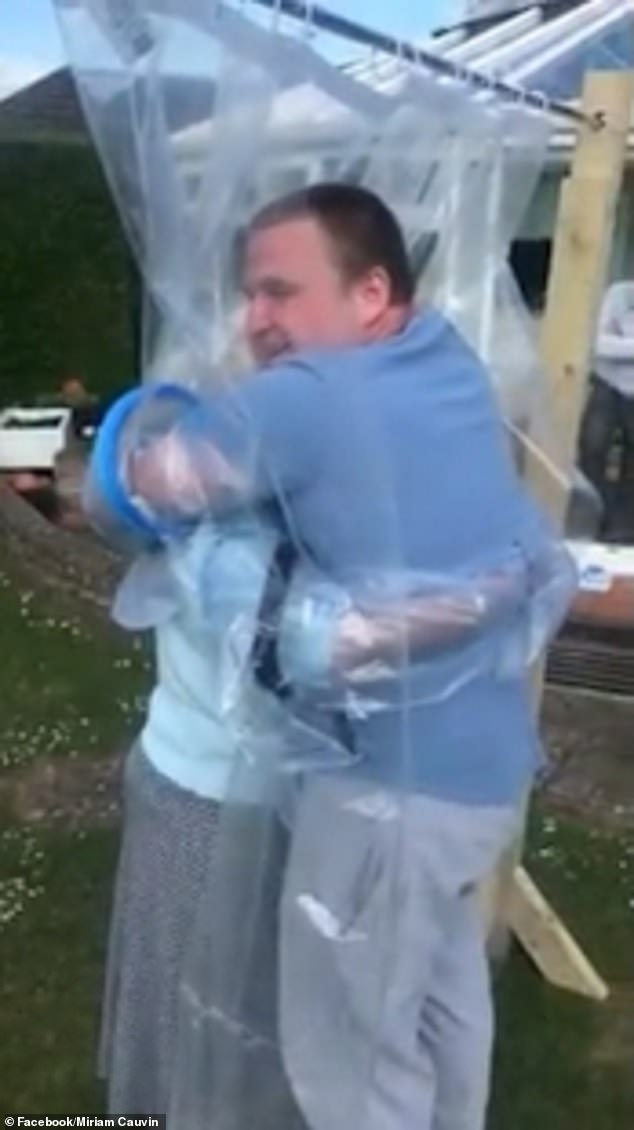 While his gran wiggles and laughs with glee, Mr Cauvin exclaims, ‘How amazing is this? I only designed them with you in mind’

As a safety precaution, the curtain is disinfected after each use.

The video comes as the latest ONS figures show that anxiety levels have doubled during the lockdown – fuelled by the over-70s who are no longer happier than the younger generation.

However scientists have insisted the most vulnerable must remain protected and suggested an approach dubbed ‘segmentation and shielding’ would be most beneficial for getting the nation back to normality.

Researchers from the universities of Edinburgh and London modelled what may happen to infection rates under various scenarios and concluded that the best course of action, in the eyes of these researchers, would be a ‘two-tier’ approach.

It would include strengthening shielding of society’s most frail – including all over-70s – and giving them added protection while relaxing measures for everyone else.

Meanwhile, Baroness Ros Altmann, 64, said earlier this month that many healthy over-70s would risk going to prison rather than continue isolating if younger generations did not have to.

The campaigner said using age-based criteria to lift restrictions would send a message that older people’s lives ‘don’t count in the same way as others’. 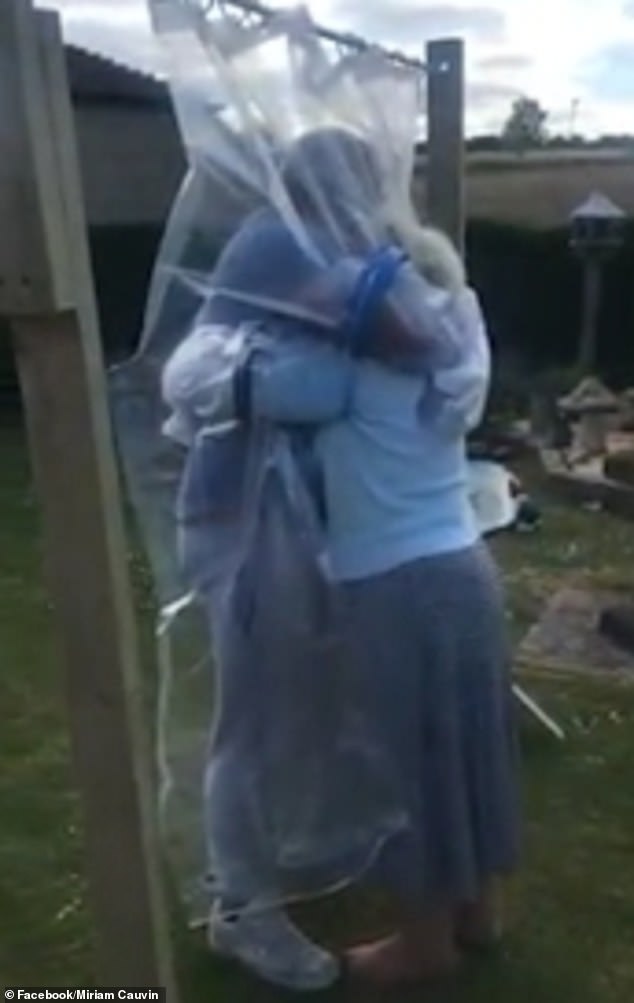