Coronavirus tests given out to thousands of Britons have been retracted over fears they are not safe, the Government has announced.

The Department of Health has instructed care homes and members of the public to immediately stop using the kits produced by Randox Laboratories.

Health bosses have refused to reveal the number of swab kits affected, or how many Britons used them before they were pulled.

But the Northern Irish firm won a £133million contract to carry out at-home Covid-19 tests and ones administered at drive-through centres and care homes.

Under the deal, the swab kits are posted back to Randox for it to process and see if someone has the virus.

So tests made by the manufacturer likely account for a huge chunk of the 150,000 swabs being carried out every day in Britain.

MailOnline understands safety concerns were raised yesterday when it emerged that one of Randox’s suppliers had not provided safety assurance documents.

Health Secretary Matt Hancock told the House of Commons tonight that physical checks were carried out on the swabs which ‘were not up to the standards that we expect.’

He said that care homes, testing centres and Brits who are yet to take their home test would be sent replacement swabs.

Mr Hancock reiterated that retracting the tests was ‘a precautionary step’ and that there was ‘no evidence’ the swabs can cause harm.

He also claimed thousands of Britons who have already taken a Randox test should not worry because it does not affect their results. 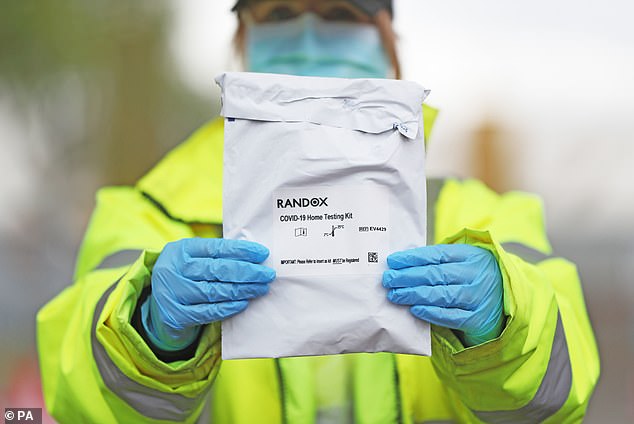 Coronavirus tests made by Randox Laboratories have been retracted over fears they are not safe, it emerged today

A government statement said: ‘As a precautionary measure and while we investigate further, NHS Test and Trace are requesting that all settings pause the use of Randox test kits with immediate effect and until further notice.

‘The risk to safety is low and test results from Randox kits are not affected. We will be supporting all testing settings to receive replacement kits as soon as possible.’

NHS Test and Trace is still failing to find a more than a fifth of patients who test positive for Covid-19 — despite launching almost two months ago, shocking data revealed today.

A total of 618 people with the disease could not be reached at all by the tracers — who phone, text and email someone up to 10 times a day to get hold of them.

And communication details were not provided for another 146 Covid-19 patients, so their close contacts will have also slipped under the radar.

Scientists have warned contact tracing programmes need to catch at least 80 per cent of infections to keep the outbreak under control.

It means the Government is still to hit the bare minimum target, despite launching the programme nearly 50 days ago, on May 28.

The owner of one care home received an email from the NHS this morning asking them to ‘store all of your unused Randox kits in a safe place to ensure that they are not used or mixed with other test kits, and one of our team will be in contact over the next week to confirm next steps’, according to the Guardian.

Randox won the second biggest contract for testing in the UK, behind only US-firm Hologic, which secured a £151 million deal.

Randox was awarded the contract by the Department of Health to help make testing kits that the government could use to ramp up its capacity to carry out 100,000 swabs each day back in April.

The Government was criticised for the Randox deal after it came to light that Tory MP Owen Paterson receives a six-figure salary from the firm to act as a consultant.

Randox’s tests can produce results in a matter of hours and machines that analyse the swabs can process 54 samples at once.

The Telegraph reports that this is not the first time there have been problems with Randox tests during the UK’s fight against Covid-19.

In May, a machine at the firm’s lab in County Antrim stopped working and the UK was forced to send tens of thousands of samples to a lab in the US.

But nearly 30,000 of the swabs had to be discarded because they took to long to arrive.

Samples have to be tested within 72 hours of the test being taken, which means that any delay in their processing could leave people with symptoms unsure if they have the virus.

In a statement, Randox said: ‘As an immediate precautionary measure we have temporarily suspended distribution of home sample collection kits using one particular batch/supplier of swabs.

‘This is a temporary measure and does not apply to our private business which uses a different supplier of swabs.’