A stash of medals belonging to a Crimean War hero has been discovered in an antique desk – now an auction house is attempting to find his family before they go under the hammer.

Baldwin & Sons is desperately seeking the descendants of Armourer Sergeant Edward Webb who fought in the Crimean War’s famous ‘thin red line’ episode – part of the Battle of Balaklava – in 1854.

The stash of Webb’s war memorabilia was found by David Grant, 71, from Brixham, Devon, who was restoring an antique desk in his loft.

Sergeant Webb’s photo was discovered along with the medals, a lock of hair and a watch fob presented to him on leaving the army.

The memorabilia had lain hidden in the draw for 150 years and all the items will be sold on September 15 with a current guide price of £2,000. 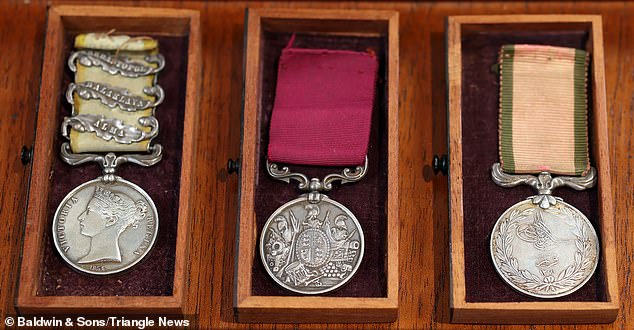 Sergeant Webb’s Crimea Medal, Army Long Service Medal and Good Conduct Medal which are up for auction on September 15 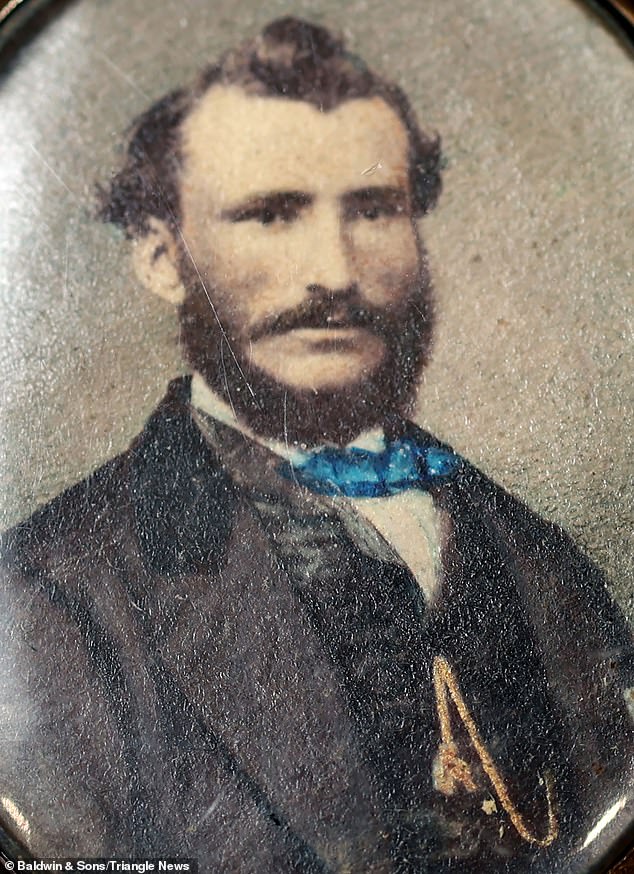 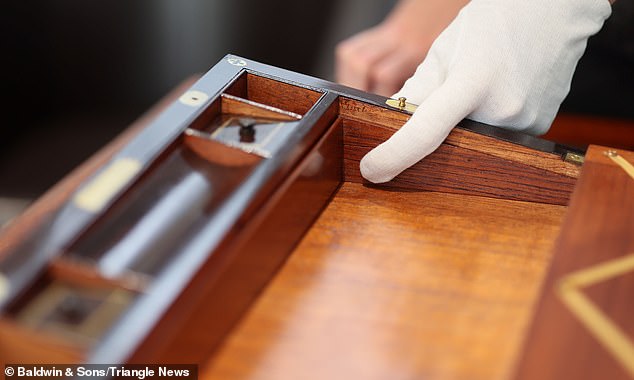 Edward Webb was among a two-deep line of around 500 infantry from the 93rd Sutherland Highlanders Regiment, who stood firm against a force of around 2,500 Russian cavalrymen during the Crimean War, in an episode immortalised by historians as ‘the thin red line incident’.

The Crimean war was fought from October 1853 to March 1856 between the allies of Britain, France and Turkey against the Russian Empire.

As the enemy galloped towards them, and their Turkish comrades fled in terror, the regiment’s commander Sir Colin Campbell said: ‘There is no retreat from here, men.

‘You must die where you stand.’

A junior officer quickly replied: ‘Aye, aye, Sir Colin, if needs be, we’ll do that.’

Their bravery is remembered in a painting called ‘The Thin Red Line’ that today hangs in the National War Museum in Edinburgh and is said to have inspired the Iron Maiden song ‘The Trooper’.

His medals were hidden behind a panel in a Victorian writing slope activated by a spring mechanism concealed in a crack in the wood grain which Mr Grant discovered while brushing away cobwebs.

Grant said: ‘It was a portal to another world and obviously tremendously exciting.

‘I felt a pulse of electricity shoot through me as the panel popped open and revealed the secret drawers behind.

‘It was like a gadget from an old James Bond movie – and then I saw the medals staring up at me along with this man’s photo.

‘His descendants are out there somewhere and it would be wonderful to find them.’ 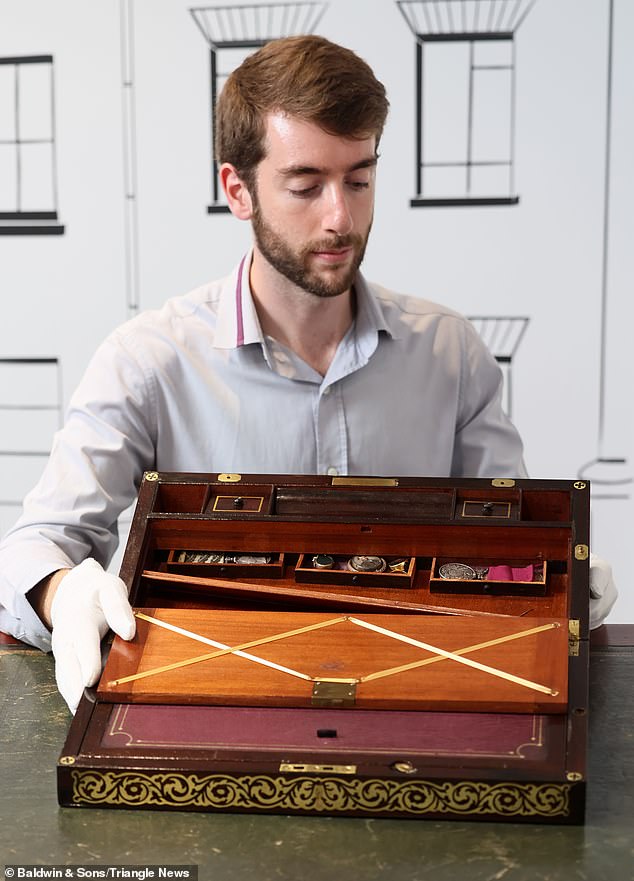 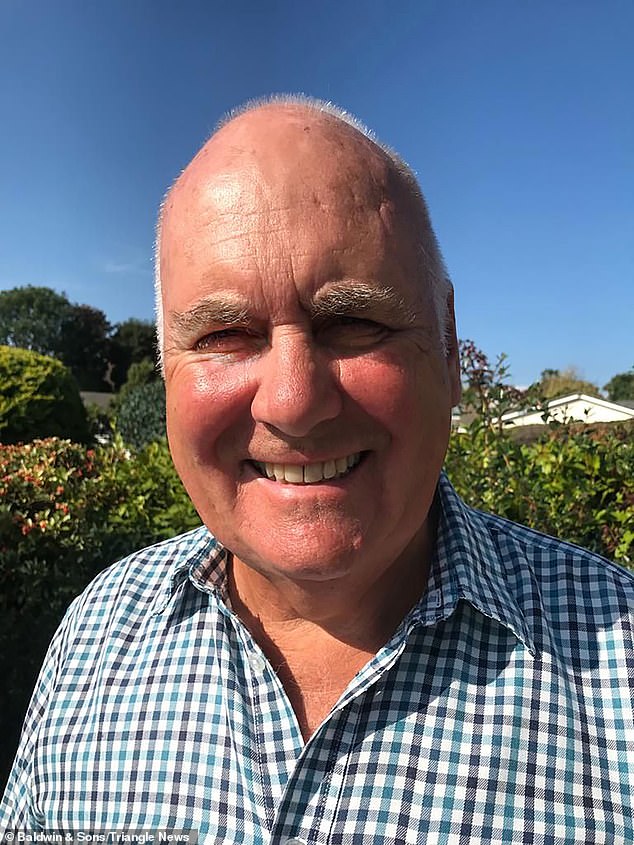 Pictured: David Grant, 71, from Brixham, Devon, found the medals and photo in the desk describing it being ‘like a gadget from an old James Bond movie’

It’s thought he returned to civilian life after completing more than 30 years service.

The watch fob is engraved ‘To Armor Sergt E Webb From The Sergts XCI PLH June 9th 1874’ – which is understood to have been the date of his leaving.

It’s believed his widow later placed his personal effects in the secret drawer for safekeeping before her family later sold it.

Now staff at Baldwin & Sons auctioneers on The Strand in London say they desperately want to trace his descendants ahead of the medals going under the hammer on September 15.

They have circulated a picture of Edward Webb in the hopes someone might recognise him.

The desk was acquired by Mr Grant’s grandfather who lived in London.

Tragically, records which might have helped trace Webb’s descendants were destroyed in a fire which swept through the National Archives in Kew in 2014. 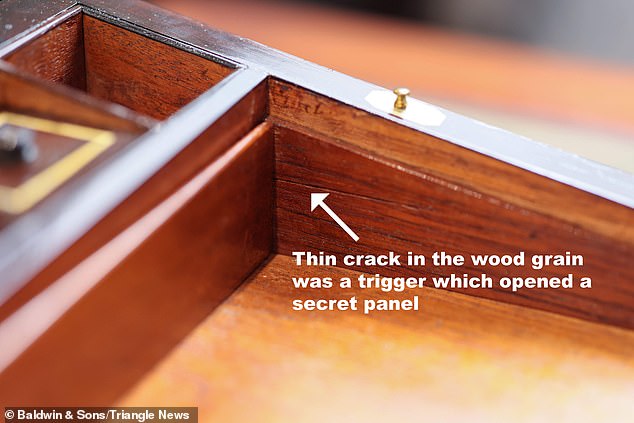 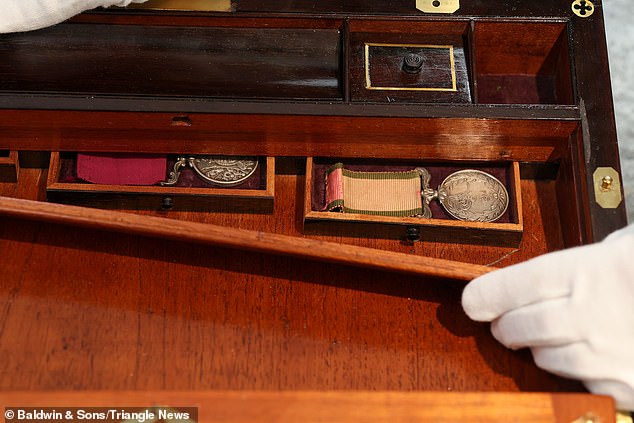 Mark Smith, medals expert at Baldwin & Sons said: ‘The courage of Sergeant Webb and his comrades that day has become part of battlefield folklore, and they are rightly lionised in the history books.

‘We’ve put a lot of work into trying to find his descendants, but sadly the records which might have helped us have all been destroyed.

‘His regiment was headquartered in Scotland, but it regularly enlisted men from south of the border as it passed through English towns and cities, so we can’t say with any confidence where Sergeant Webb was from, or what happened to him after he left the army.

‘It’s possible that someone out there might look at the photo and see a resemblance to a Webb they know. We’d love to hear from them.

‘In the meantime, these medals will serve as a fitting reminder of the heroism of that famous day.’

Sergeant Webb’s Crimea Medal, Army Long Service Medal and Good Conduct Medal will be sold along with the writing slope and other items on September 15 at Baldwin & Sons with a guide price of £2,000.

‘The Thin Red Line’ Incident in the Crimean War

The Thin Red Line incident took place during the Crimean War in the Battle of Balaklava on 25 October 1854.

The Russian army tried to get between British forces besieging Sebastopol and the British supply base at Balaklava.

The battle is best known for the disastrous Charge of the Light Brigade, but also for ‘The Thin Red Line’, when a single Scottish Highland regiment, the 93rd Highlanders remarkably halted a Russian cavalry charge.

The 93rd had been left alone to defend Balaklava after Turkish forces and Marine artillery had retreated.

A Russian cavalry force of 2,500, commanded by General Ryzhov, was advancing on the camp of the British cavalry.

Of that, four Russian cavalry squadrons, numbering around 400 men, advanced on some 500-600 Highlanders.

Infantry were not thought to be able to withstand cavalry in the open, and would usually fire then form defensive squares.

On this occasion, the regiment deployed in line and fired three volleys, which inflicted terrible damage on the Russians, who subsequently withdrew.

The phrase ‘The Thin Red Line’ is in fact a misquote. Eyewitness war correspondent William Russell wrote in his dispatch for The Times of ‘a thin red streak topped with a line of steel’, but in later accounts he used the ‘Thin Red Line’ phrase, which stuck in the public consciousness.