Cyclist, 58, left with fractured cheek after hitting SQUIRREL at 35MPH

Cyclist, 58, is thrown over his handlebars and left with a fractured cheek and memory loss after hitting a SQUIRREL at 35MPH (and it’s not a happy ending for the rodent either)

A cycling enthusiast is recovering from a fractured cheek and memory loss after hitting a squirrel at 35mph.

Tim Egerton, 58, crashed into the rodent as he hurtled downhill on his £3,500 road bike in Oakworth, Keighley, West Yorkshire, last week.

Mr Egerton, a sales representative, fractured his cheek in two places and had no recollection of the crash after being thrown over his handle bars by the force of the impact with the squirrel.

The married father had been riding down a steep road, Providence Hill, when the unfortunate squirrel decided to cross at the wrong moment.

Mr Egerton, who was wearing lycra and a protective helmet at the time, said: ‘I was going down the hill at 30 to 35mph when a squirrel suddenly ran out. 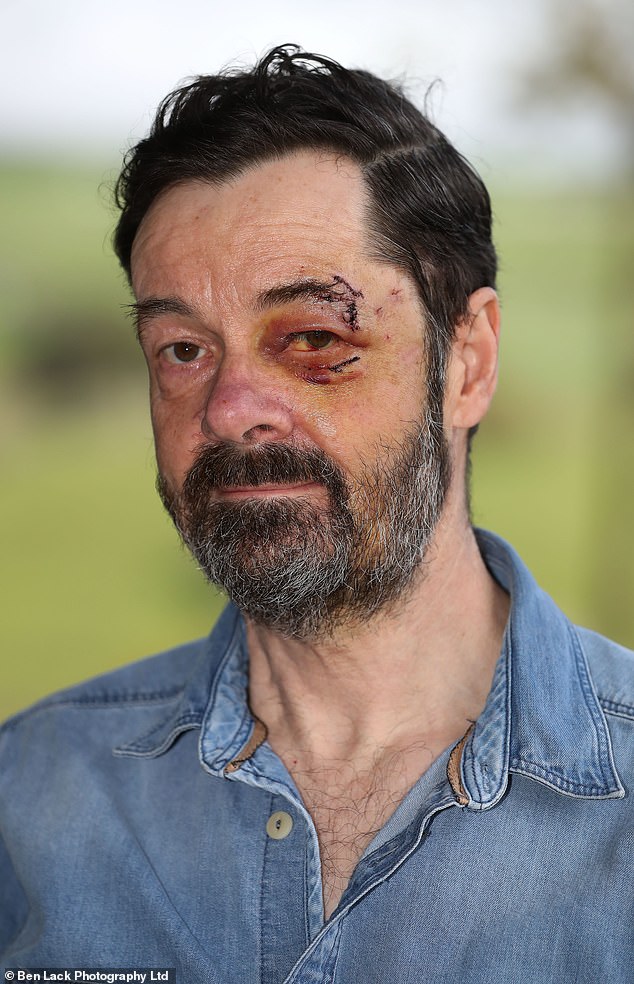 Tim Egerton, 58, crashed into the squirrel as he hurtled downhill on his £3,500 road bike in Oakworth, Keighley, West Yorkshire, last week

‘I went over my handle bars and hit the road with my face.’

Locals came to the aid of Mr Egerton, who had been riding alone in training for The Struggle – a 108mile cycling race around Harrogate.

He was taken by ambulance to Airedale General Hospital, West Yorkshire, where surgeons repaired his damaged cheek bone with a titanium plate.

Mr Egerton said: ‘The surgeon said that if I’d not been wearing a helmet my injuries would have been much worse.

‘I have no recollection of the accident, but people who came to help me took photos of the dead squirrel in the road and I found grey fur trapped between my tyre and wheel rim.’ 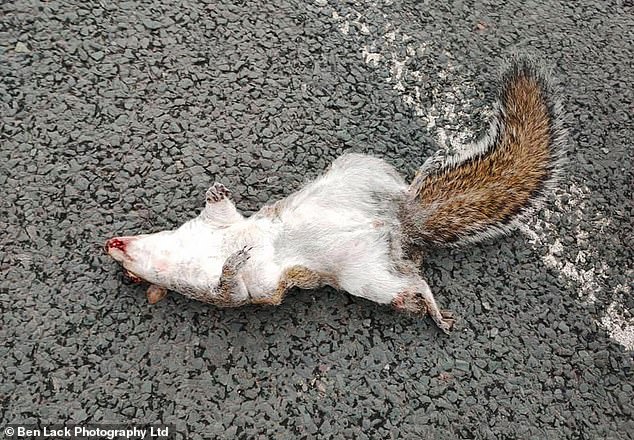 The deceased squirrel who caused the crash, pictured at the scene 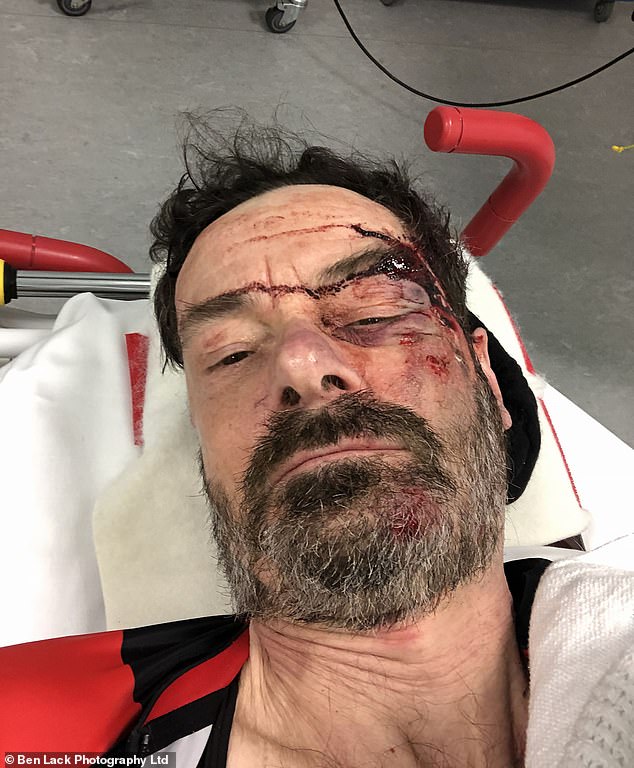 Surgeons told Mr Egerton that his injuries would have been ‘much worse’ if he wasn’t wearing a helmet. Pictured after the crash

Mr Egerton said his Ridley carbon fibre bike is undamaged, but he is under doctor’s orders not to ride for the next six weeks and not to drive a car for four weeks.

He added: ‘The Yorkshire Air Ambulance landed to pick me up, but I went to hospital in a road ambulance, I was disappointed I didn’t get a go in the helicopter.

‘I’m so grateful for all the help people gave me and I can’t thank them enough for their kindness.

‘Of all my years of cycling it is a tangle with a squirrel that has caused me my most serious accident. 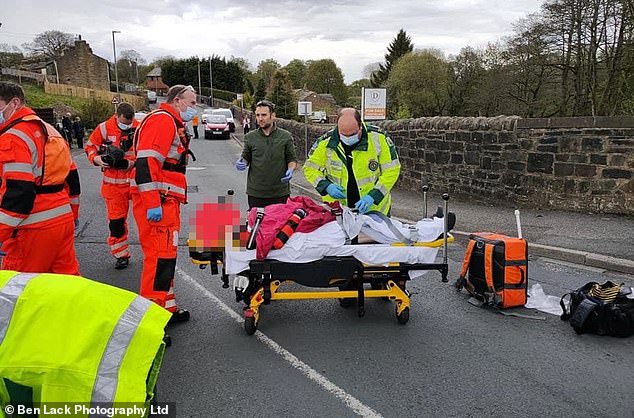 Paramedics attend the crash scene. Mr Egerton had no recollection of the crash 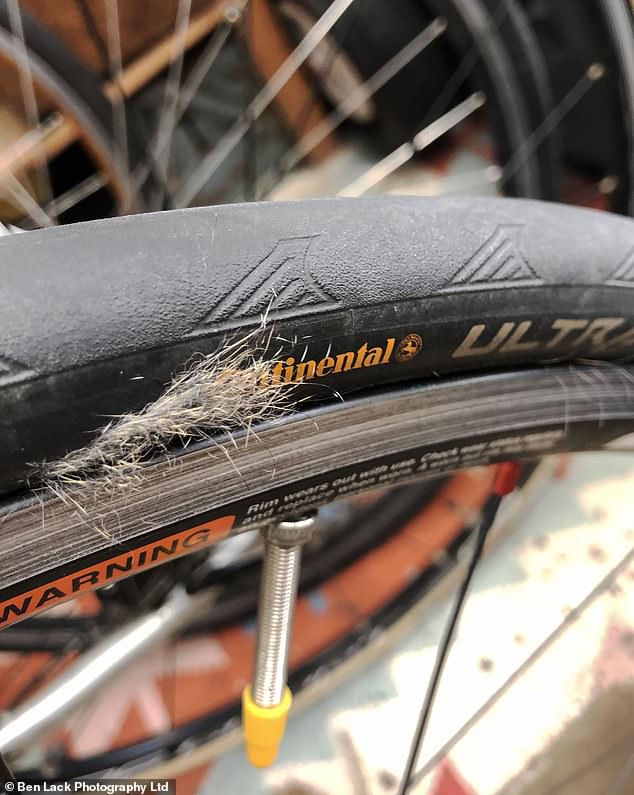 Mr Egerton found grey fur trapped between his tyre and wheel rim, suggesting the squirrel became lodged in the wheel 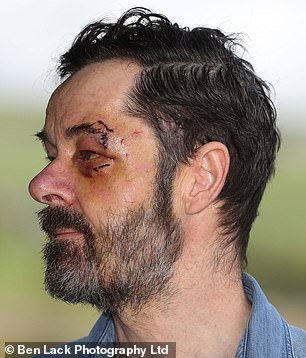 A view of Mr Egerton’s eye and cheek injuries

Mr Egerton added that he has missed The Struggle race due to the accident but will be there next year as he plans to get cycling again as soon as possible.

He added: ‘My helmet had a hairline fracture in it and my bike seems to be okay, but I’m going to get it checked over before I get back riding again.

‘I try to get put on my bike as often as possible, and once I am mended, I’ll be back riding again.

‘I was told the squirrel was killed in the accident and I’ve seen photos people took, but I can’t remember a thing about it.

‘The last thing I remember is riding down the hill and then coming round in the back of an ambulance. The bit in the middle is a blank.’ 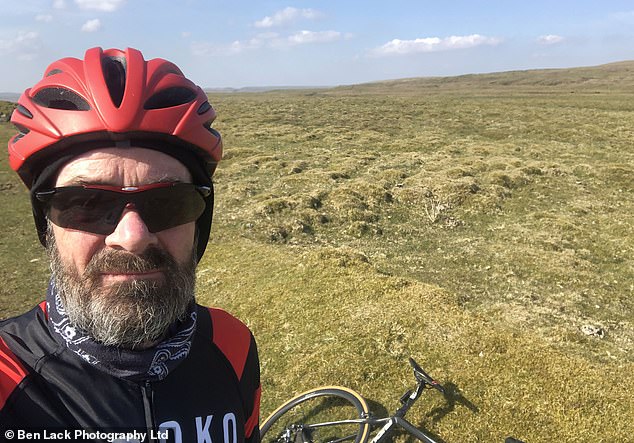 Mr Egerton added that he has missed The Struggle race due to the accident but will be there next year as he plans to get cycling again as soon as possible. Pictured before the incident

Ms Scott commented on social media: ‘Bloody squirrel, it was a chunky one and ran straight across road at that moment you were passing, how unlucky.

‘If you had been few seconds earlier or later you would have missed the perishing squirrel, but relieved your injuries were no worse.’