Cyprus’ ‘most destructive’ fire ever spreads through villages, farms

Nicosia: Cyprus search crews have discovered four charred bodies outside a fire-swept mountain village in what the interior minister called the “most destructive” blaze in the eastern Mediterranean island nation’s history.

Interior Minister Nicos Nouris said Civil Defence volunteers discovered the remains just outside the village of Odou on the southern edge of the Troodos mountain range. 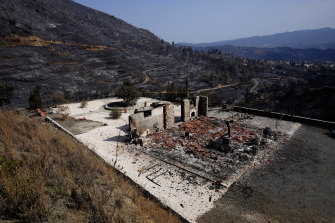 A burnt house is seen on outskirts of Ora village, in the background is the Larnaca mountain region, Cyprus, on Sunday.Credit:AP

The blaze, which began on Saturday afternoon, Cyprus time, outside the village of Arakapas, spread quickly amid strong winds and forced the evacuation of at least eight mountain villages, destroying homes and scorching 55 square kilometres of pine forest and orchards.

“We are experiencing the most destructive fire since the founding of the Cyprus republic,” Nouris said, adding that 50 homes were damaged so far.

Authorities believe the bodies belong to four Egyptian labourers aged 22 to 29 who had gone missing on Saturday evening. Nouris said he had spoken to the Egyptian ambassador to Cyprus and that arrangements would be made to repatriate the remains. 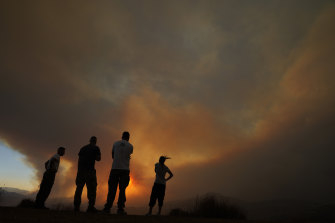 Residents of villages watch a fire in the Larnaca mountain region of Cyprus on Saturday.Credit:AP

Odou community chief Menelaos Philippou told state-run Cyprus News agency the four men who worked at a greenhouse that grew tomatoes tried to flee the fire along a mountain road, but their small truck veered off the road and crashed down an embankment. They then try to flee on foot but didn’t make it. 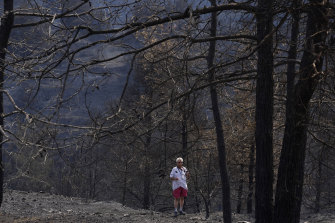 A man walks through the burned forest, in Ora village in Cyprus on Sunday.Credit:AP

President Nicos Anastasiades called the fire “an unprecedented tragedy” except for the destruction wreaked by a 1974 war that split the island along ethnic lines after Turkey invaded in response to a coup aimed at union with Greece.

Greek and Israeli aircraft joined 11 other planes and helicopters in firefighting efforts overnight.

Despondent residents who saw their homes go up in flames vented anger at what they called authorities’ slow response. Anastasiades, who toured the fire-hit villages, pledged immediate government help to farmers and homeowners who lost crops and property and the families of those who perished in the fire.

Police said a 67-year-old man faces arson charges. A court ordered that he remain in custody for eight days to assist the investigation into the cause of the fire.

Nouris said firefighting aircraft and ground crews focused their efforts on Sunday on two massive fire fronts between the villages of Odou and Vavatsinia.

Government deputy spokeswoman Niovi Parissinou said some fire-afflicted villages were later declared safe and residents could return home. She said fire crews would remain on alert all night to prevent a possible resurgence of the blaze.

Fire officials said the entire department had mobilised to fight the fire, including 70 fire engines, seven bulldozers and 10 water tankers. Many volunteers also rushed to help.