Heroism of Battle of Britain Spitfire ace revealed: Pilot who shot down nine German planes and intercepted two V1 rockets before surviving for days in English Channel has medals sold for £17,000

The remarkable heroics of a Spitfire ace who fought in the Battle of Britain and D-Day were revealed as his medals and log books sold for more than £17,000 – more than double what they were expected to fetch.

Squadron Leader Arthur Charles Leigh, who was born in London and moved to Cambridge before joining the RAF, shot down nine German planes during the World War II and and survived several days adrift in the English Channel.

The auctioneers will donate 5% of the fees to NHS Charities Together.

Sg Ldr Leigh carried low-level bombing raids on ground targets, taking out trains and trucks taking weapons and ammunition to Normandy in the aftermath of D-Day. 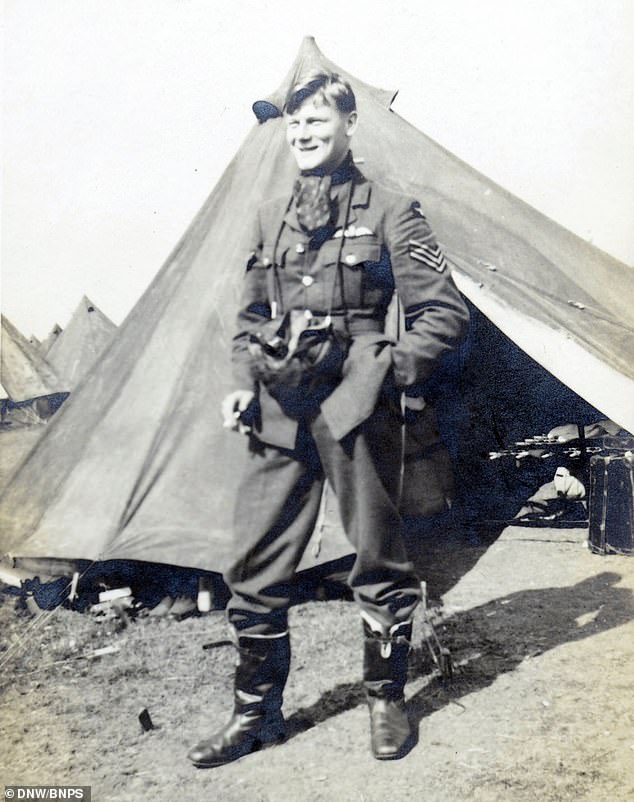 The medals of heroic Spitfire ace, who fought in the Battle of Britain and D-Day, have sold for more than £17,000 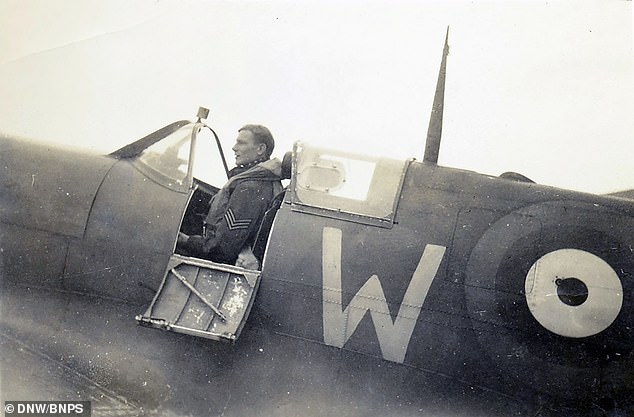 The hero flyer saved countless lives by intercepting two V1 rockets bound for London. He also spent many days adrift, with his devastated mother wrongly being told he was killed in action 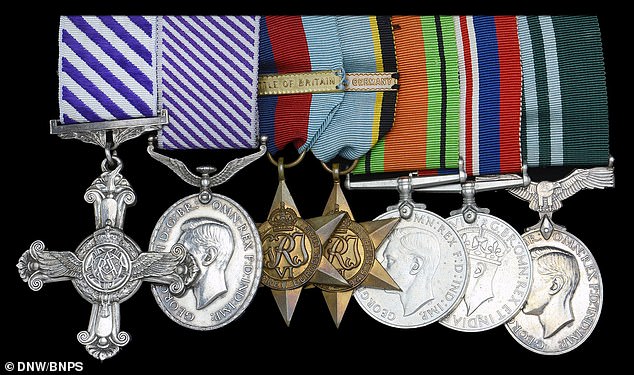 His medals and his RAF logbooks, dated from 1940 to 1945, were sold by London auctioneers Dix Noonan Webb for £14,000 – more than double what they were expected to fetch 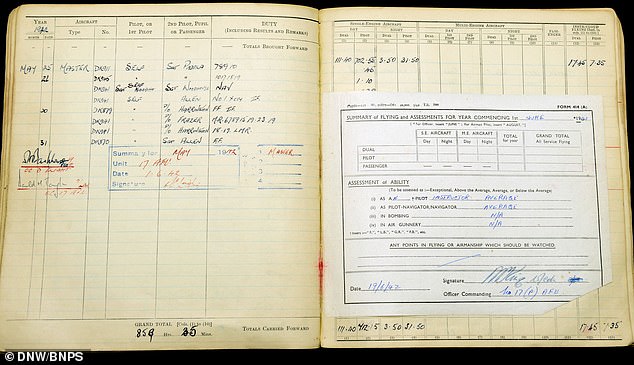 With fees added on the oversees buyer paid £17,360. Five per cent  of the fees from the sale will be donated to NHS Charities Together

Spitfire pilots scrambled to intercept V1 missiles when one was detected and, as a last resort if they ran out of ammunition, get their plane’s wing as close as possible to tip the rockets out of the sky.

Sg Ldr Leigh was one of the brave pilots who performed the high-risk ‘wing-ramming’ tactic if it wasn’t safe to shoot the ‘doodlebug’ flying bombs. 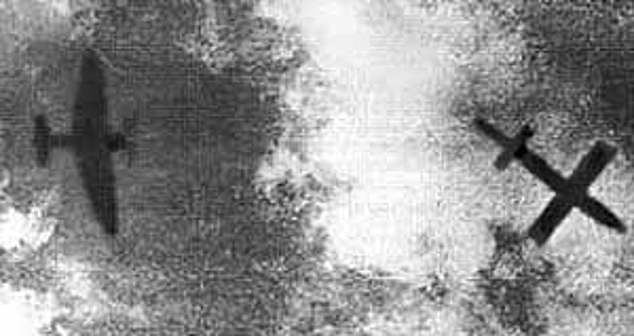 Spitfire pilots saved countless lives by to intercept V1 missiles when one was detected and, as a last resort, tipping the rockets out of the sky with the wing of their plane

The risky tactics were used after more than 100 V1 missiles were aimed at the capital each day from 1944. The attacks caused about 23,000 casualties, almost all civilians.

The life-saving mission involved massive danger including misjudging the distance and crashing if the wings hit each other too hard.

Not only did Sg Ldr Leigh save lives with this epic feat but was also shot down twice during his time in service.

He survived an unknown number of days adrift six miles off the French coast when he had to bail out and land in the sea in August 1943.

His devastated mother received a telegram wrongly telling her he had been killed in action before a British Air Sea Rescue launch rescued him.

THE FLYING BOMB WHICH CAUSED MASSIVE LOSS OF LIFE IN BRITAIN 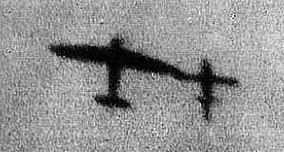 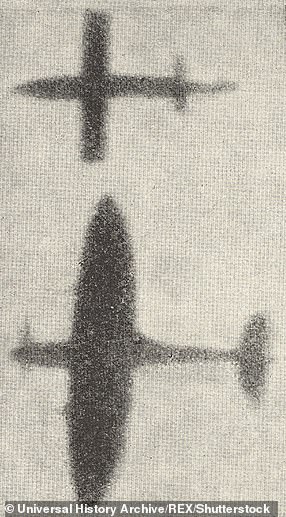 The flying bomb, known as the Buzz Bomb or Doodlebug, was developed at Peenemünde Airfield by the German Luftwaffe during World War II.

They were designed for mass bombing of London and they were fired from launch sites along the French and Dutch coasts. 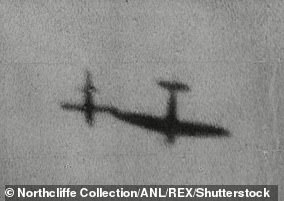 Pilots resorted to the incredibly risky tactics in 1944 as more than 100 V1 missiles were aimed at the capital every day. In total the attacks caused about 23,000 casualties, almost all civilians.

The technique – as shown in this sequence of photographs – involved pilots climbing high above the doodlebug.

They dived down and using their plane’s wings to tip the wings of the bomb. 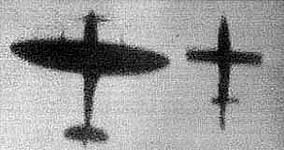 The aim was to flip it, and send it crashing to Earth.

The fighter planes had to start at a higher altitude than the missile because, without the dive, they did not have the speed to catch the bomb.

Most aircrafts were too slow carry out the manoeuvre, but Mosquitoes, Hawker Tempests, Gloster Meteors and Spitfires formed ‘diver patrols’ to intercept the V1s.

Andy Saunders, a military historian and editor of Iron Cross magazine, said: ‘Gallantry medals awarded to Battle of Britain pilots, the ‘Few’, always command very high prices and are much sought after by collectors.

‘There is something special about the bravery of these extraordinary men.

WHAT HAPPENED IN THE BATTLE OF BRITAIN?

August 13 – Germany lands a huge blow when it hit vital radar masts at key airfields in the South. Known as Eagle Day (Adlertag).

August 24 – Luftwaffe, under clear orders not to bomb London, mistake the capital for military targets.

August 25 – Churchill sends 40 planes to bomb Berlin. The hero pilots are known as ‘the Few’.

September 15 (Battle of Britain Day) – RAF destroy formation of Luftwaffe over London and forced Hitler to shelve his plans for invasion.

September 26 – The Spitfire factory at Southampton was destroyed.

‘For that reason, they fetch higher prices than similar medals awarded to others – and that isn’t to say others were less worthy or any less brave. It is just the romantic aura, mythology almost, with which they are associated.’

Sg Ldr Leigh was born in London in 1919 and his family moved to Cambridge and where he worked in a clothes shop.

His heroic career began when he joined the RAF Volunteer Reserve in June 1939 to train as a pilot.

He joined No 64 Squadron and flew Spitfires on his first operational sortie on September 29 before moving on to No 72 Squadron at Biggin Hill in October.

He shared in the destruction of a Dornier 17 bomber on December 17, 1940, followed by eight Messerschmitt 109s between May and September 1941.

In August 1943 he returned from a posting to Gibralter and joined No 56 Squadron at RAF Manston, Kent, flying Typhoon fighter-bombers.

He was shot down on his first sortie over Calais.

The squadron converted to Mustang fighter-bombers in April 1944, which was when he strafed German ground targets like trains, lorries and an ammunition barge in France.

On June 6, 1944, or D-Day, he escorted the Airborne Division to the beachhead and took part in bombing and strafing attacks across the month.

He was shot down a second time on June 22 when he was forced to land his Mustang near St Mere Eglise, Normandy.

He moved to hunting deadly V1 rockets launched from sites in Nazi-occupied Belgium by July 1944.

His last operational flights before leaving the RAF at age 26 in December 1945 were from October to December 1944. He provided escort cover for RAF bombers on raids over the Ruhr, Cologne, Munster, Frankfurt and Dortmund.

He began a successful architectural hardware business in Norwich and died in July 2004 aged 84.