Lifeline is opening its first crisis support centre in the eastern suburbs after Daisy Turnbull pitched the idea to attract more volunteers to work the phone lines.

Lifeline Direct chief executive Robert Sams said the centre, which is set to open in Bondi Junction in July, will bolster Lifeline’s capacity to answer calls to its national crisis helpline. 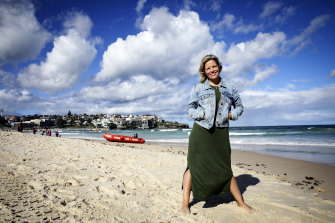 Daisy Turnbull saw an opportunity to open a Lifeline centre in the eastern suburbs.Credit:Renee Nowytarger

“On average, the volume of calls is 25 per cent higher than it was pre-COVID, and we’re regularly getting above 3000 calls a day, nationally.”

The Sun-Herald has previously reported on the mental health crisis exacerbated by the COVID-19 pandemic and the ‘black summer’ bushfires, including large increases in self harm and other mental health presentations to emergency departments. However, suicide figures are down.

Sams said Turnbull convinced him to open a centre in the eastern suburbs and promised to get behind it.

“The east shows a huge amount of volunteering through a lot of great organisations … it just seemed to me like there was the opportunity.”

He said he was persuaded by her genuine commitment, “not just her name” – referring to Turnbull’s public profile as an author, a columnist for this masthead, and as the daughter of former prime minister Malcolm Turnbull and former Sydney lord mayor Lucy Turnbull.

“I’m sure her passion for what we do will help us get volunteers and fundraise in the local region – there’s no doubt about that,” Sams said. “Every time I meet Daisy, her passion and energy rubs off on me and that’s what I find impressive.”

Sams said Westfield was providing a generous deal on office space in the Bondi Junction mall, but overheads for the new premises would be $400,000 a year. The charity had the first $100,000 of set-up costs, but needed to fundraise the rest.

Lifeline is also seeking 30 volunteers to apply by April 28, with training to start on May 18. Each shift will have six volunteers at a time, plus a supervisor.

Turnbull, who has been a Lifeline volunteer in Parramatta for three years but lives in Paddington, is calling on her networks to donate and volunteer to run the centre.

She has made getting the centre up and running a focus of her six-month sabbatical after leaving her teaching job at St Catherine’s in Waverley, along with being home for her youngest child to start school and releasing her new book 50 Questions To Ask Your Teens.

“Whenever I’ve told people I’m volunteering or that I’m a Lifeline crisis support volunteer, they’ve always said they’ve wanted to do it, so it just seemed to me like there was the opportunity to have a centre in the east,” Turnbull said.

“The east shows a huge amount of volunteering through a lot of great organisations – surf lifesaving clubs, Wayside Chapel, and other charities.”

Turnbull said being a Lifeline volunteer is a “hugely humbling and very rewarding” experience, had taught her skills she used professionally, and made her a better person.

“Being on the phones reminds you how important an organisation like Lifeline is because for so many people just having someone on the other side of the telephone is what they need,” Turnbull said.