‘I would be in the shower and he would sneak in and pee on me.’ Model who had a six-year relationship with accused rapist Danny Masterson testifies he humiliated her, called her ‘white trash’ and repeatedly took her against her will

The rape trial of That ’70s Show star Danny Masterson entered its second week Monday with another alleged victim taking the stand to tell of her abusive relationship with the actor.

Jane Doe 3 – who lived with Masterson for six years – told the jury that the actor would urinate on her, call her ‘white trash,’ be physically abusive toward her and regularly force her to have sex against her will.

Last week Jane Doe #1 described how Masterson allegedly threw her in his jacuzzi, raped her and then pulled a gun on her, telling her, ‘Don’t say a f***king word.’

Jane Doe 3 was successful model, barely 18, when she met Masterson in 1996 and soon moved in with him, the court heard.

‘It was good for the first year – he was very charming and I fell for him,’ she said.

The Scientologist TV star grew tired of her traveling around the world on modeling assignments and asked her to stay at home. ‘His religion discusses this – women should stay home,’ she told the court.

He also urged her join the Church of Scientology, she added. ‘He made it very clear to me that I must become a Scientologist. In order to remain in this relationship I needed to start doing [Scientology] courses. 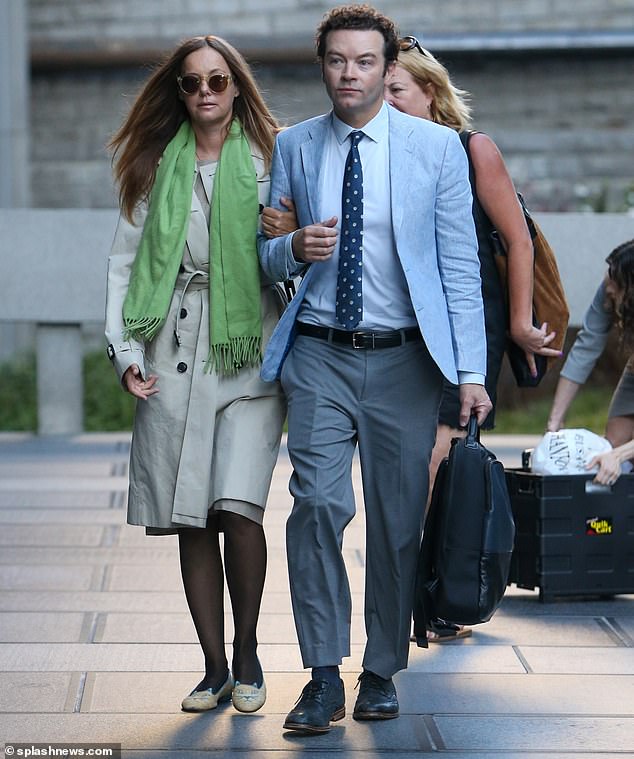 Masterson is facing a sentence of 45 years to life in prison if he’s found guilty. He’s seen with wife Bijou Phillips 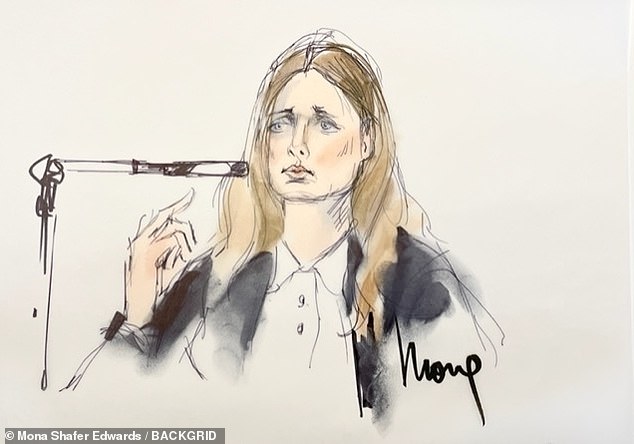 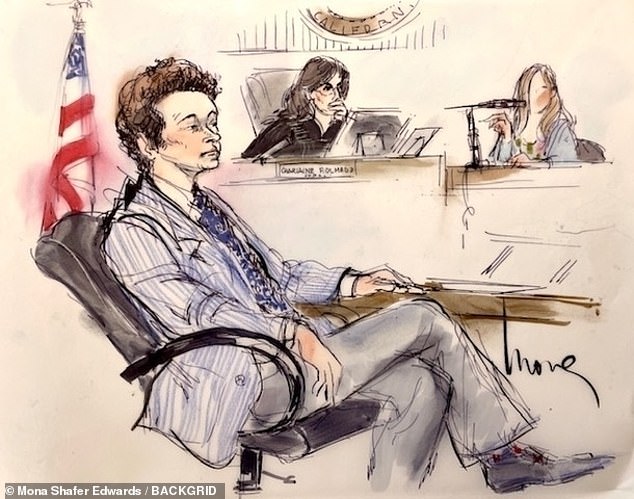 Jane Doe #1 described how Masterson allegedly threw her in his jacuzzi, raped her and then pulled a gun on her, telling her, ‘Don’t say a f***king word.’ Masterson is seen in a court sketch

‘I was told that my parents were suppressive people and I disconnected with my family. He [Masterson] did not like any of my friends – so my new friends were Scientologists.

‘My entire life became his friends and family and his church.’

Jane Doe 3 told the jury that about a year into their relationship, Masterson changed.

‘He became very aggressive sexually – and I recall some physical abuse and emotional.

‘I remember coming back from Paris and I was really tired and jet-lagged and he wanted to have sex and I didn’t.

‘It resulted in a fight and he dragged me by my hair across the bedroom floor. He called me fat and other insults.’

She told the court that incidents of Masterson wanting sex when she didn’t became more frequent. ‘It became pretty regular – I just let it happen.’

Jane Doe 3 said that on these occasions it would be she, not him, who would say sorry.

‘I would apologize to him – if I didn’t, he would be very angry. He would not talk to me. I felt like it was my fault. He was always right…

‘He would want to have sex, I would tell him no and he’d have sex anyway. You just don’t say no to him.’

She told the jury that when Masterson was angry at her, ‘He would call me white trash.’

She also said that he ‘would urinate on me. I would be in the shower and he would sneak in and pee on me. He thought it was funny.’

Jane Doe 3 said that her relationship with Masterson changed – and was on the way to ending – in late 2001 ‘when I started sort of sticking up for myself.’

Fighting back tears, she recalled a night in November 2001 when, ‘I was sleeping and woke up and he was having sex with me. I didn’t want to have sex with him so I said, ‘No, I don’t want to…

‘But he wouldn’t stop. I tried to push him off but he put all his body weight down on me. He pushed my arms back – I felt trapped.

‘I was able to to get my left hand free and do something I knew would get him off of me. I pulled his hair. He has these rules – no touch face rule and no touch hair rule.’

Asked by Deputy District Attorney Reinhold Mueller how Masterson reacted when she pulled his hair, she said, ‘He hit me hard on the face with his hand.

‘When he hit me I was shocked by it. I was angry. I was screaming, ‘Get off me.’

‘At that point he got up, stood over me and spit on me. And he called me white trash.’

Earlier in the proceedings a friend of alleged victim Jane Doe 1 was called by the prosecution – and then declared a ‘hostile witness’ by the presiding judge.

Witness Shaun Fabos was called to testify by Deputy District Attorney Reinhold Mueller to corroborate the accuser’s story that on the April 2003 night of the alleged rape at Masterson’s house, the actor threw her in the Jacuzzi, gave her a drink that quickly made her feel ‘tipsy’ and pulled a gun on her.

Jane Doe 1 also told the jury that on a family trip to Florida the day after the alleged rape, she was in serious pain from injuries inflicted by Masterson and had bruises all over her body.

But on the witness stand Monday, Fabos said that in a conversation he had with her shortly after the alleged rape, he couldn’t remember her telling him she was thrown in the Jacuzzi, she didn’t mention Masterson using a gun or using force one her – and later retracted her story, telling him, ‘it never happened.’ 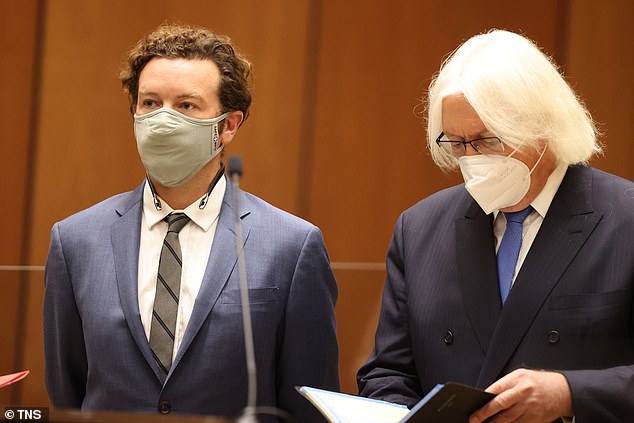 Actor Danny Masterson attended Los Angeles Superior Court on Monday for the second week of a trial in which he was accused of raping three women at his Hollywood Hills home between 2001 and 2003. Masterson pictured on September 18. His lawyer is the famed Thomas Mesereau who successfully defended Michael Jackson in his child molestation trial 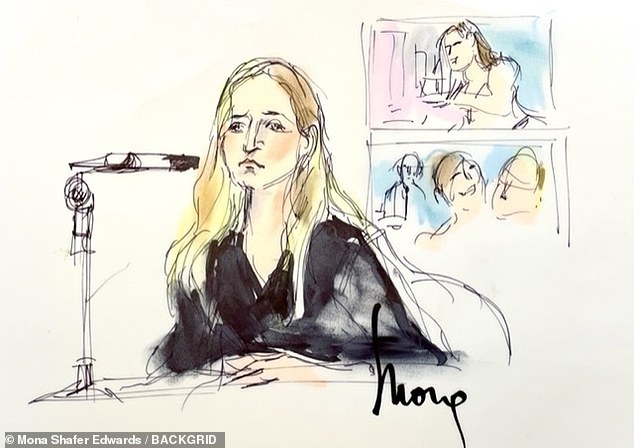 Shaun Fabos could not remember seeing any bruises or injuries on Jane Doe 1 during a trip to Florida after the alleged rape. He did remember her saying that Masterson gave her a drink that ‘made her feel weird’ 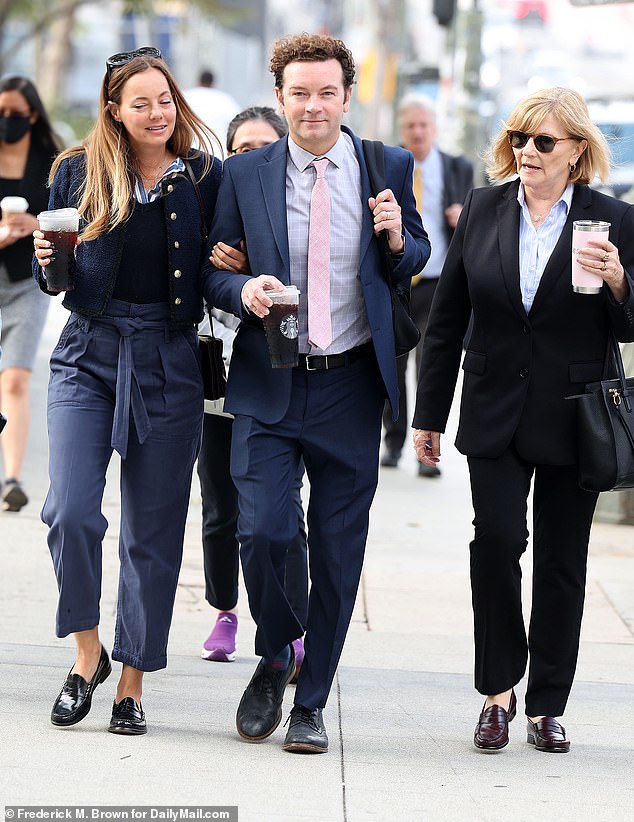 Danny Masterson arrives for court on October 21, 2022 in Los Angeles

The TV star, who has been free on $3.3million bail since his arrest in June 2020, has pleaded not guilty to raping three women at his Hollywood Hills home between 2001 and 2003.

He is facing a sentence of 45 years to life in prison if he’s convicted at the end of his trial where Elvis Presley’s daughter, ex-Scientologist Lisa Marie Presley, is on the witness list.

His accusers – whom DailyMail.com is identifying only as Jane Does 1 through 3 – are all former Scientologists and are also suing him and the Church of Scientology in civil court, claiming that they’ve been harassed and intimidated since reporting him to police.

On the witness stand Friday, Fabos, a Scientologist and long-time friend of Jane Doe 1, said that he met with her at a coffee shop after the alleged rape and while he ‘doesn’t remember’ her saying Masterson threw her in the Jacuzzi, he does remember her saying that he gave her a drink that ‘made her feel weird.

‘She said she thought something strange was happening to her – she didn’t understand how she got so drunk so fast,’ he said. ‘She could not understand why she was so tipsy after only one drink.’

He said that Jane Doe 1 ‘couldn’t understand how she woke up in Masterson’s bed,’ adding, ‘She said she would not have done that.

‘She said that something weird had happened and that foul play had occurred.’

Fabos told the jury that he remembered reacting to this saying, ‘That’s not OK. I’m going to beat the s**t out of him!’

He told the court that in a subsequent phone call, Jane Doe 1 recanted her story of the incident at Masterson’s house the night April 25 2003, telling him, ‘It never happened’.

And later she told him that when she told him it didn’t happen, she was trying to ‘protect’ him from trouble he could land in if he retaliated against Masterson.

Fabos said he went on a family trip to Florida with Jane Doe 1 following the episode at Masterson’s house but when Mueller asked him if he noticed bruises on her body while they were in Florida, he said, ‘No.’

After Judge Charlaine Olmedo made a finding that Fabos was a hostile witness, defense attorney Karen Goldstein asked him if, during their coffee shop conversation about the night of the alleged rape, Jane Doe1 had ever mentioned a gun.

‘Did she mention anything to you about force being used? asked Goldstein.

‘No,’ replied Fabos. ‘She said, I would never have done that – he’s such a dork, something like that. There was a mention that she didn’t particularly like him.’

‘So she wasn’t pleased that she woke up in his bed?’ asked Goldstein. ‘Right,’ he responded.

Of Jane Doe 1’s later phone call denying that the whole incident had happened, ‘She said she made it up or it wasn’t true…something like that,’ said Fabos.

When Goldstein asked Fabos if he saw bruises on Jane Doe’s 1’s body in Florida, he replied, ‘No.’

Anther witness, Jane Doe 1’s cousin Rachel said that she too was on the family trip to Florida at the end of April 2003 and that she did notice bruises on her arms and hips.

She added that her cousin, usually outgoing and energetic, was ‘sullen and quiet’ on the flight to Florida and wearing a scarf, long sleeves and pants to cover her bruises.

But under cross examination from defense attorney Philip Cohen, when asked if Jane Doe 1 ‘appeared to be in physical pain’ in Florida, Rachel answered, ‘No.’