A forest fire that tore through part of Easter Island has charred some of its fabled monumental carved stone figures, known as moai, authorities said Thursday.

On Easter Island, which lies some 3,500 kilometers (2,175 miles) off the west coast of Chile, 100 hectares have been razed by flames since Monday, Perez said. The area around the Rano Raraku volcano, a UNESCO World Heritage Site, was the most affected.

An estimated several hundred moai are in that area, as well as in the quarry where the stone used to carve the sculptures is extracted. 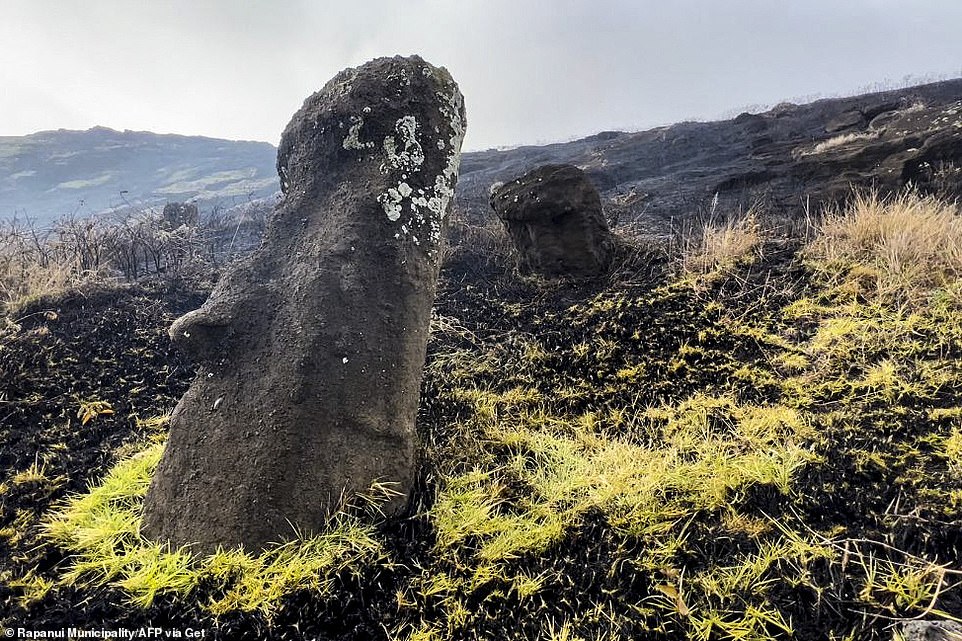 Stone statues of the Rapa Nui culture were affected by a fire at the Rapa Nui National Park in Easter Island on October 6, 2022 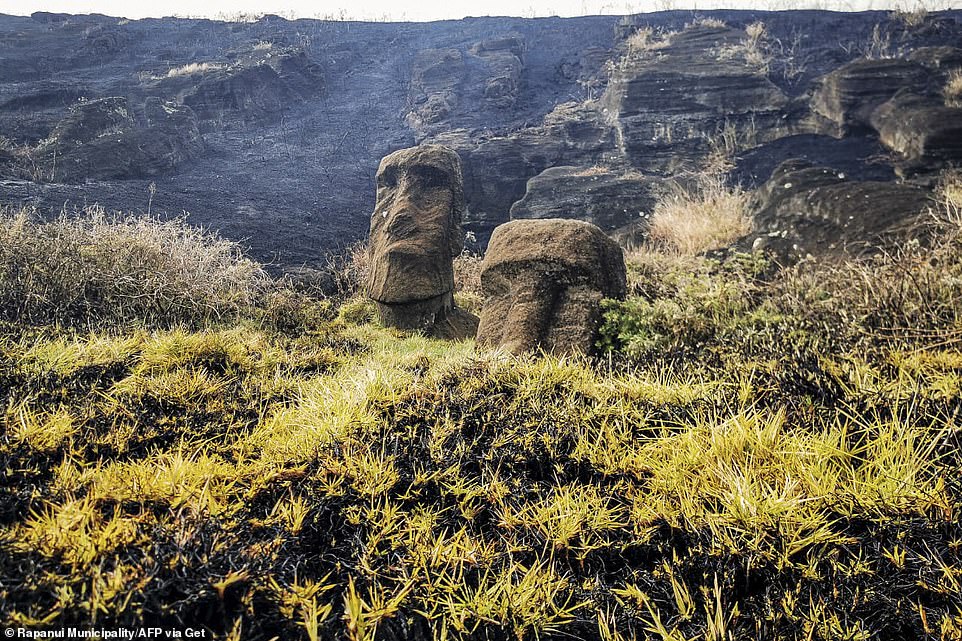 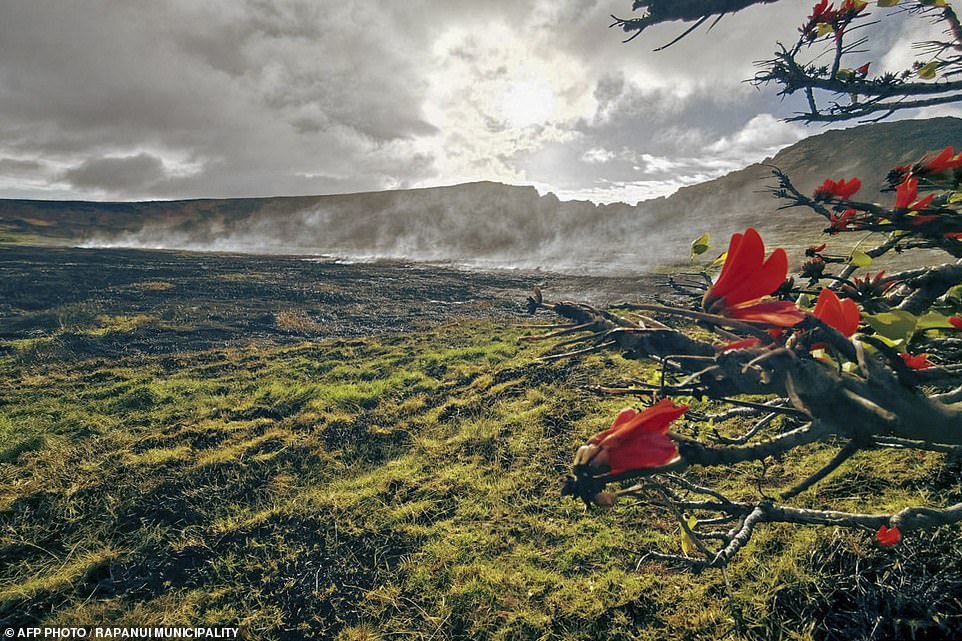 View of a fire at the Rapa Nui National Park in Easter Island, Chile, on October 6, 2022 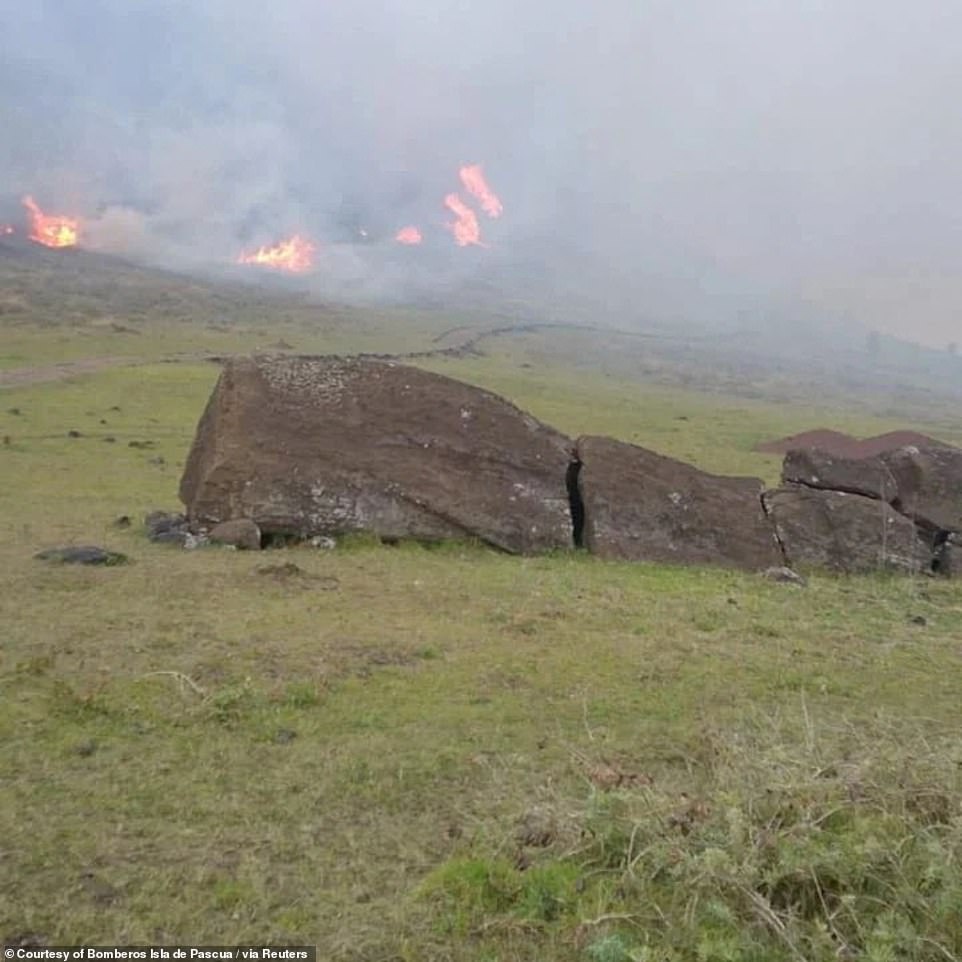 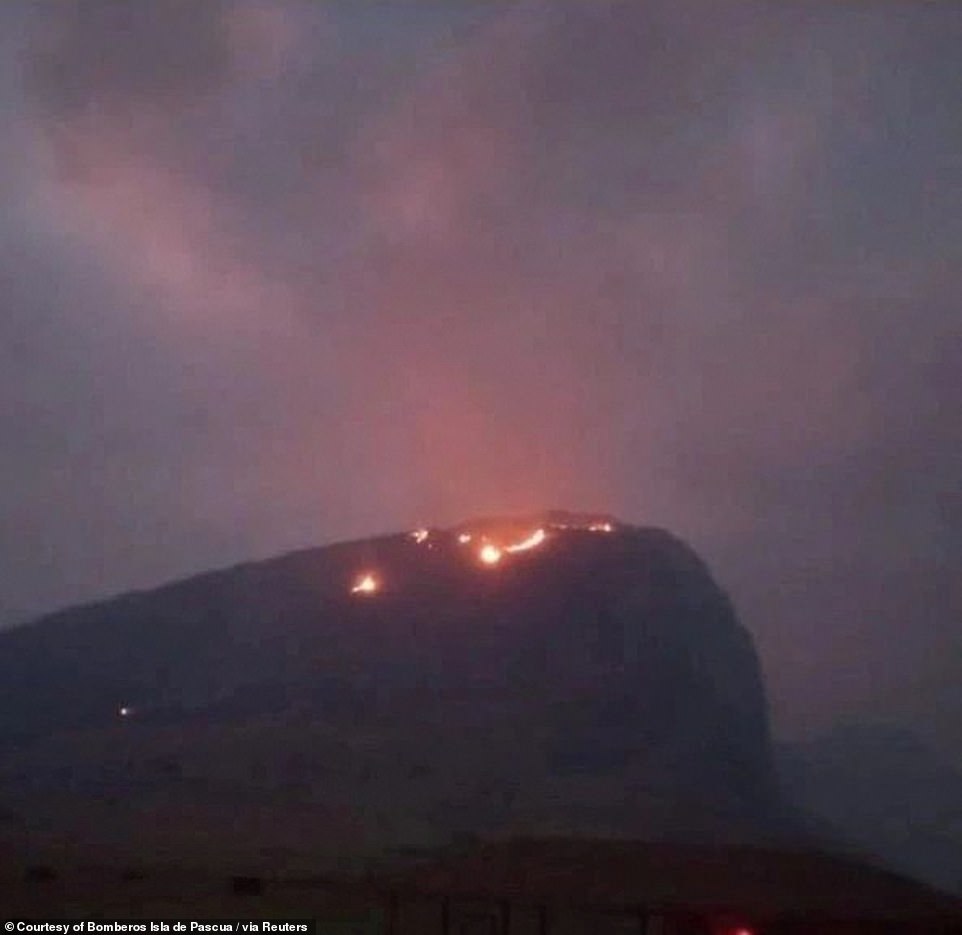 Fire burns in the area of Rano Raraku volcano on Easter Island after forest fires broke out in the region on October 6, 2022

While there is no consensus on when Easter Island was first inhabited, it is thought Polynesians settled the island around the 12th century.

The heads may be the most famous, but some statues also have bodies, and a number are complete human figures.

95% of the figures were carved from compressed volcanic ash found on the side of the extinct Rano Raraku volcano.

The native islanders carved the statues by hand and moved them around the island by tying ropes around them and rocking them into place.

The statues were built to honour chieftain or other important people who had died.

There is still no report on the total damage.

But the fire comes just three months after the island was reopened to tourism on August 5, after two years of closure due to Covid-19.

Before the pandemic, Easter Island – whose main livelihood is tourism – received some 160,000 visitors a year, on two daily flights.

The island is also, less commonly, accessible by boat.

With the arrival of Covid-19 in Chile, tourist activity was completely suspended.

The island was long inhabited by Polynesian people, before Chile annexed it in 1888.

Local Polynesians call the island ‘Rapa Nui’, ‘Big Rapa’, referring to the resemblance to Rapa Island in the Bass Islands.

The famous head statues were carved centuries earlier by the Rapa Nui people in honour of fallen leaders and moved by hand around the island by small groups.

The island remains one of the world’s most isolated inhabited islands, 1,150 miles (1,850 km) from the Juan Fernandez Islands. 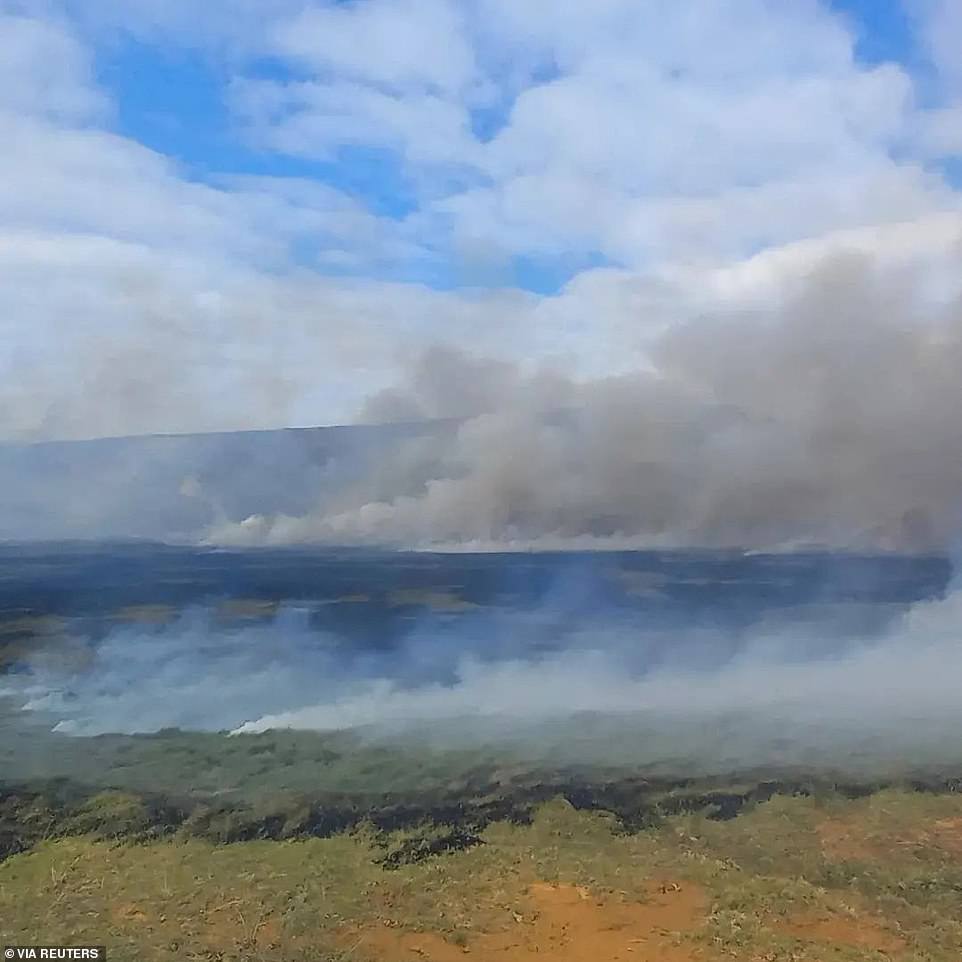 Easter Island lies approximately 2,175 miles (3,500km) west of Chile and is one of the most remote inhabited islands globally 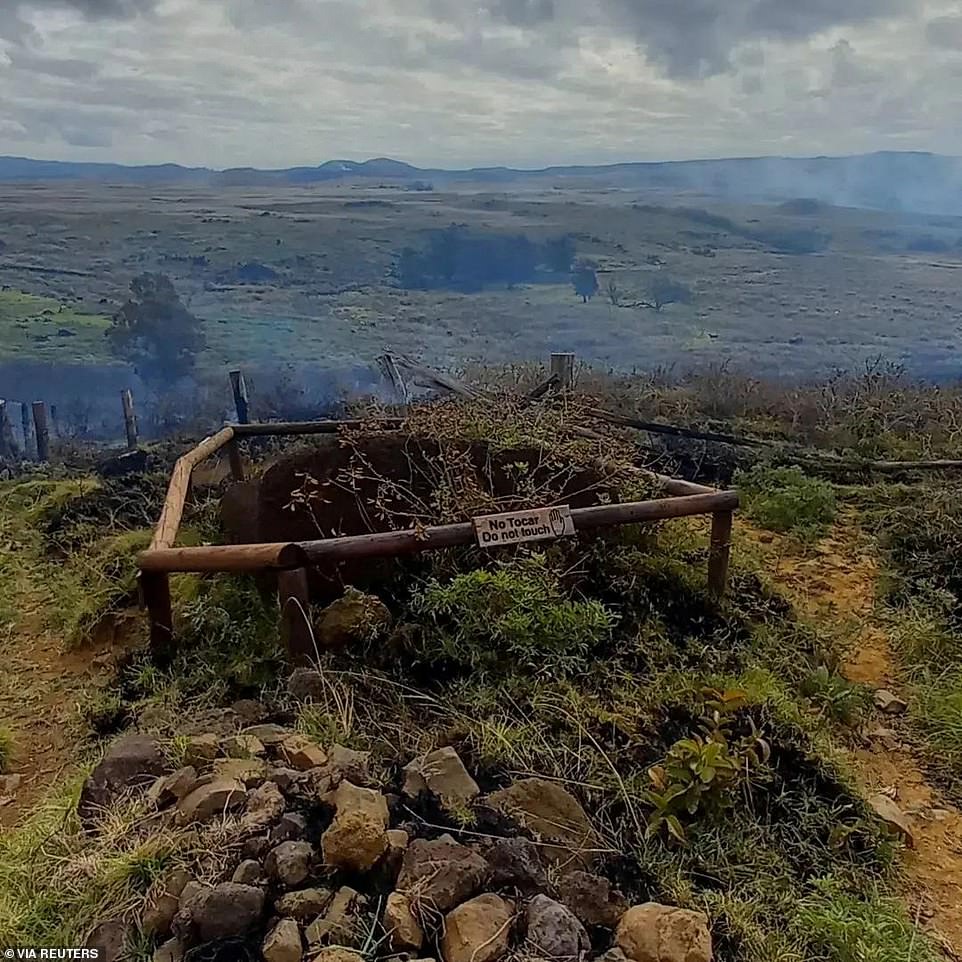 Smoke rises from a fire burning in the area of Rano Raraku volcano on Easter Island,itself a UNESCO World Heritage Site 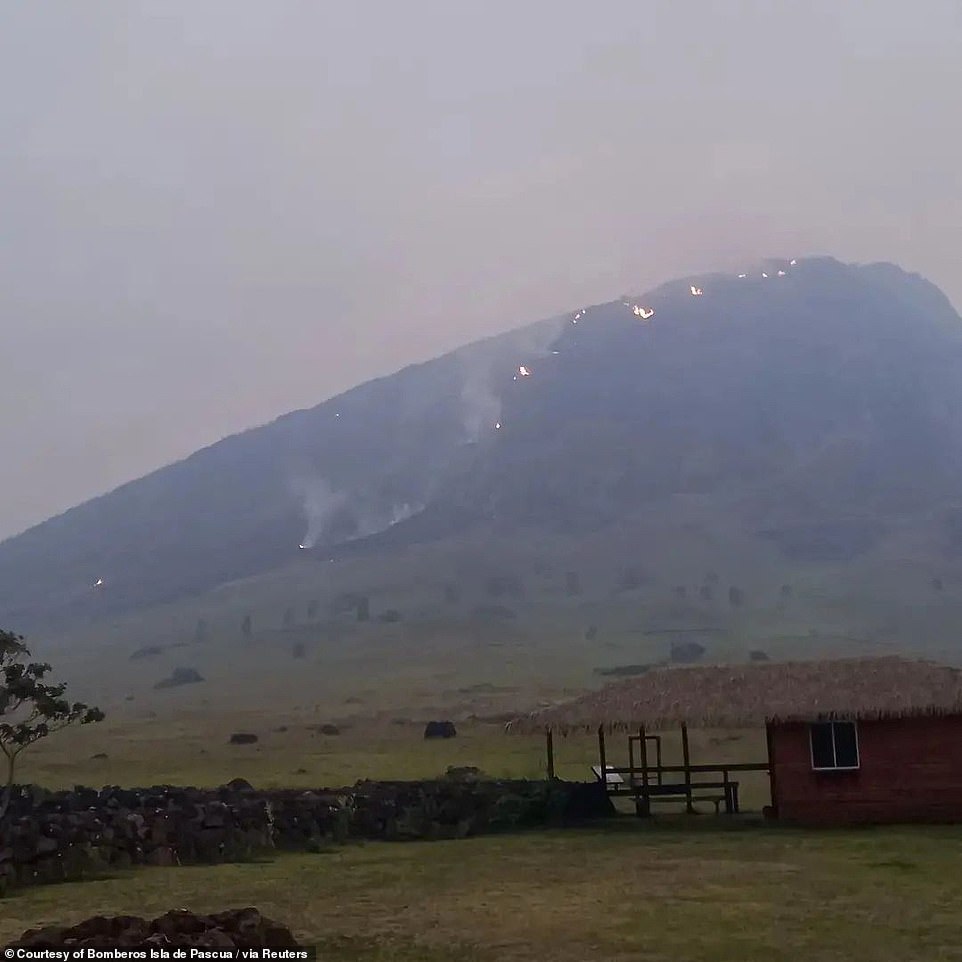 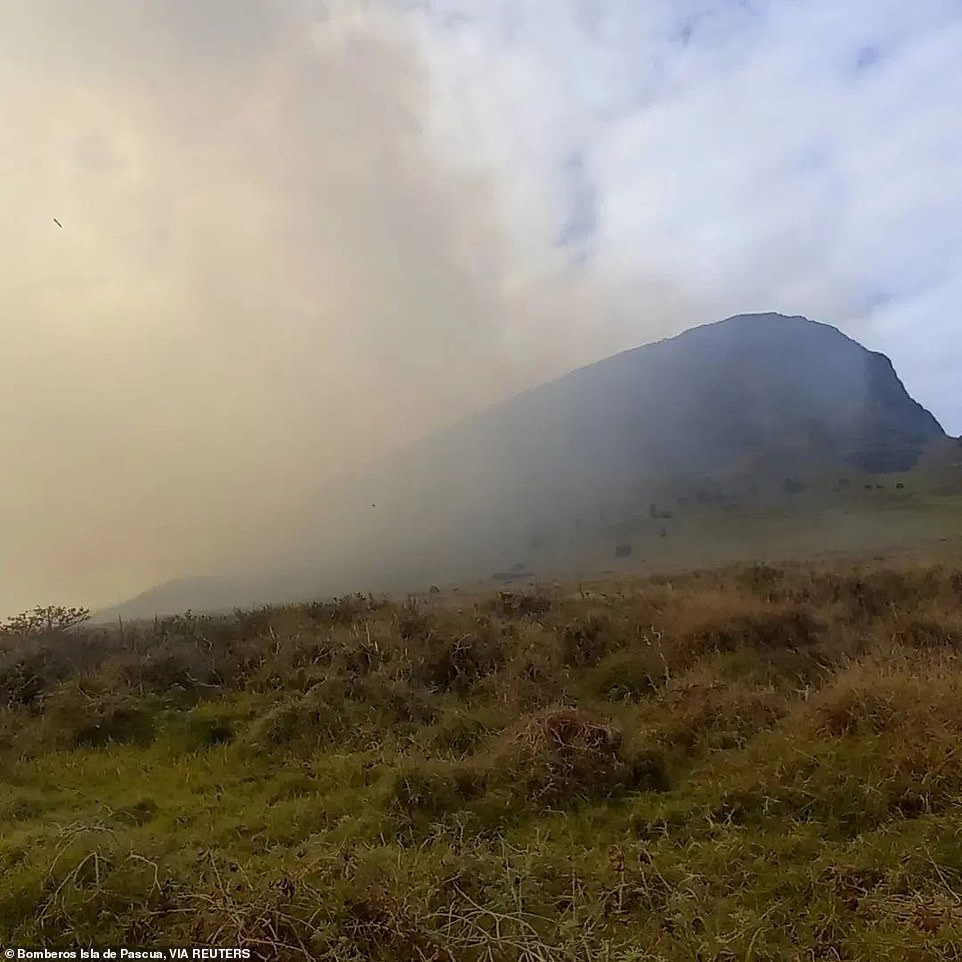 Easter Island, depending heavily on tourism, only reopened to the world on 5 August 2022 after Covid-19 reached Chile