More than 300,000 Victorian homes are without power after extreme winds lashed the state, with affected residents being warned there may be delays with getting through to emergency services due to demand.

The Bureau of Meteorology is warning that severe weather will continue throughout the morning, particularly in coastal area’s to Melbourne’s south-west, with a warning for damaging winds in place for much of Victoria. 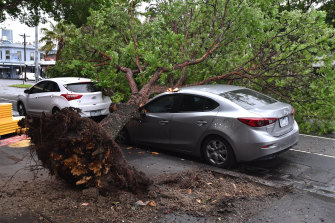 A tree has fallen on the vehicle and is blocking Bay Road in Port Melbourne after heavy storms.Credit:Joe Armao

The State Emergency Service (SES) has received 1162 calls for assistance over the last 24 hours, with the busiest units in Ballarat, Bendigo, Whitehorse and Broadmeadows. Almost 900 reports were for trees down.

Just over half of the calls for help were from the metropolitan area.

A spokeswoman for the SES said they expected the calls to keep flooding in this morning, and warned there could be delays getting through on their phone line due to the high demand.

“Our 132500 number that people call through on is experiencing delays this morning, so we as people to be patient and keep trying,” she said.

“Victorians need to be careful when they’re on the roads, as there might be hazards. Please drive to conditions.”

Electricity distributor AusNet Services were reporting 103,000 outages on their website on Thursday morning. United Energy said 65,438 customers were off supply, while Jemena reported 56725 customers without power.

Mark Anolak, a senior forecaster at the Bureau of Meteorology, said wind gusts of between 90 and 100 kilometres had been recorded in Melbourne from 6am. 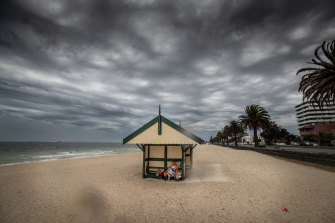 Windy conditions will continue to batter the city’s west and the Mornington Peninsula until at least 10am.

“The reason for all these winds is we’ve seen a very intense low-pressure system come very close to Melbourne,” Mr Anolak said.

“If you think of a cyclone, the closer you get to the eye of cyclone, the stronger the wind. The low-pressure system has come very close to Melbourne, so we have those strongest winds wrapping around across metropolitan area.”

He said the winds hitting Melbourne would gradually ease, with moderate gusts later this evening and the odd light shower scattered around the city. A trend of finer weather will emerge across the weekend.

Chris Miller from the Department of Transport said Victoria’s roads were “treacherous” on Friday, with trees down affecting major thoroughfares like Richmond’s Church Street and the Monash Freeway.

“As wild weather continues to sweep across the state motorists are urged to avoid travel if they can. If you do need to travel please slow down and use extreme care,” the Department of Transport said.

“Speeds have been reduced to 60km/h across the West Gate Bridge due to the high winds. The speed limit may drop further should the wind increase. Please obey all overhead signage.”