‘Shoo!’ Family hold their nerve and see off hungry bear after it pulls down a window screen and tries to break into their home

A man came face-to-face with a hungry bear and bravely told it to ‘get away’ as it tried to break into his home.

A 17-month-old bear pulled down the window screen at a family’s home in Mammoth Lakes, California, while it was searching for food.

Christian Pondella filmed the attempted heist on July 1, showing him holding his nerve as the animal stares at him through the uncovered window. 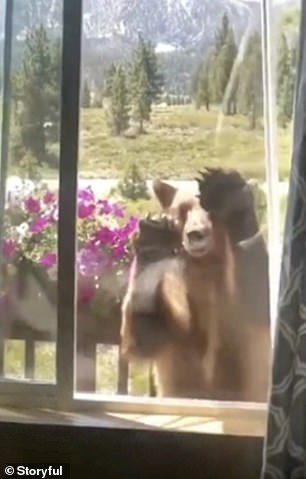 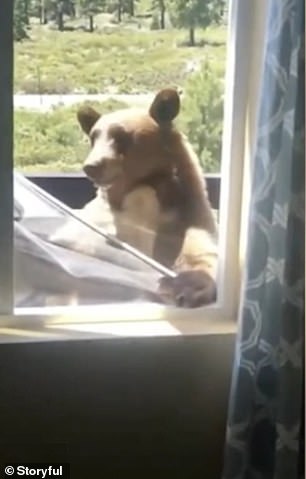 Christian Pondella filmed the bear staring at him through the window screen of his home in  Mammoth Lakes, California, on July 1 before pulling it down

The bear sticks its entire head through the window, after pulling down the screen, and Mr Pondella bravely walks up to the animal, shouting ‘get away’.

The animal looks at him but refuses to move, using his paws to keep the window screen down.

His children can be heard shouting ‘hey, shoo!’ joining in their father’s attempts to get rid of the hungry animal.

The bear, which is standing on its back legs, puts both of its front paws on the window and casually glances around the inside of the house.

Someone can be heard gasping in the background as a woman politely tells the animal to ‘please get down’.

Mr Pondella said he was eventually able to get the bear to leave his property, as the animal refused to move throughout the video. 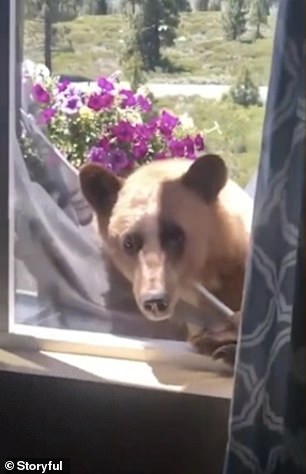 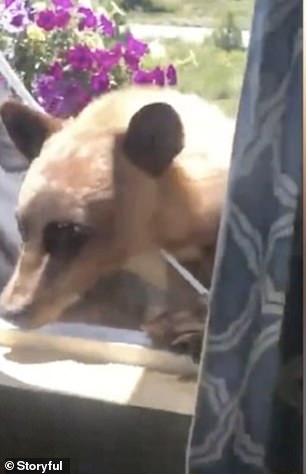 The bear sticks its head through the window. Mr Pondella shouted ‘get away’ and ‘shoo’ at the bear 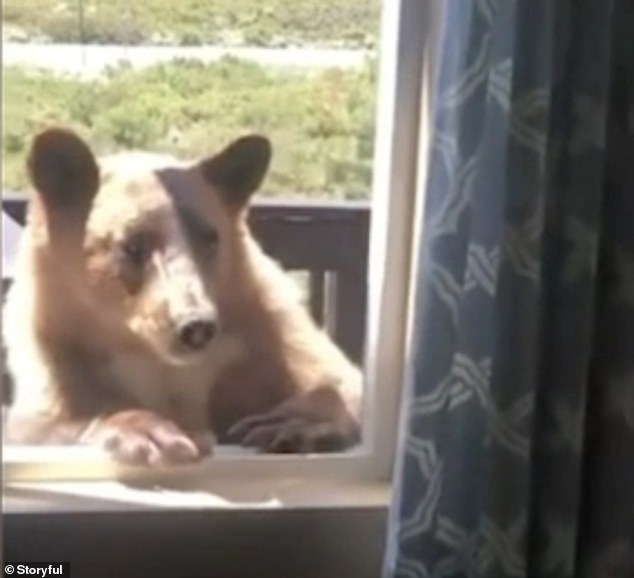 The animal looks at him but refuses to move, using his paws to keep the window screen down

The bear has been visiting Mr Pondella’s neighbourhood in Mammoth Lakes since spring and has turned up at his home at least three times looking for food.

Mr Pondella said: ‘He is a 17-month-old bear who has been recently weaned from his mother so he is looking for easy food.

‘He probably got food at some point at a house in our neighbourhood so has kept returning looking for more.’

He added that bears, and other wildlife, are a common sighting in the area, as he and his family live near mountains.

Mr Pondella said the bears are not aggressive towards humans but are occasionally seen roaming through the neighbourhoods and campgrounds searching for food.