What energy crisis? Christmas-mad father decks his house out with 10,000 LED lights (and says it’ll only cost him £4.50 a night thanks to his low energy bulbs)

A village in County Durham is aglow with the spirit of yuletide cheer as a Christmas-mad tree surgeon has decked his house out with 10,000 LED lights – at a cost of only £4.50 a night.

For over five years, Andrew Walters, 32, has been lighting up Stillington, a village near Stockton, with his extravagant house decorations in a bid to rid the festive season of its commercialisation and bring back the true magic of Christmas.

Over the past five weeks Mr Walters, with help from businesses across Teesside, has covered his house top to bottom with over 10,000 LED lights but his energy bill comes in at only £4.50 a night thanks to the energy-saving bulbs.

Having received an extremely positive response from his neighbours, Mr Walters decided to use his attraction’s popularity to raise money for those who need it most and for the past three years, has raised hundreds of pounds for vital charities such as Cash for Kids. 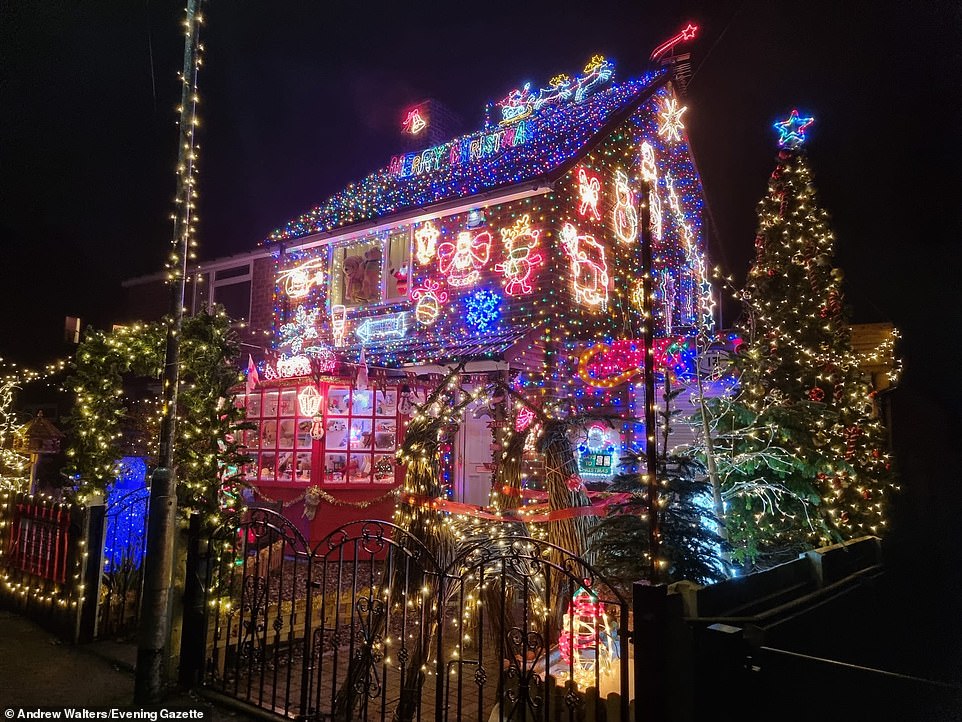 Andrew Walters, 32, has decorated his house in Stillington, County Durham, with 10,000 LED lights and says it will only cost him £4.50 a night 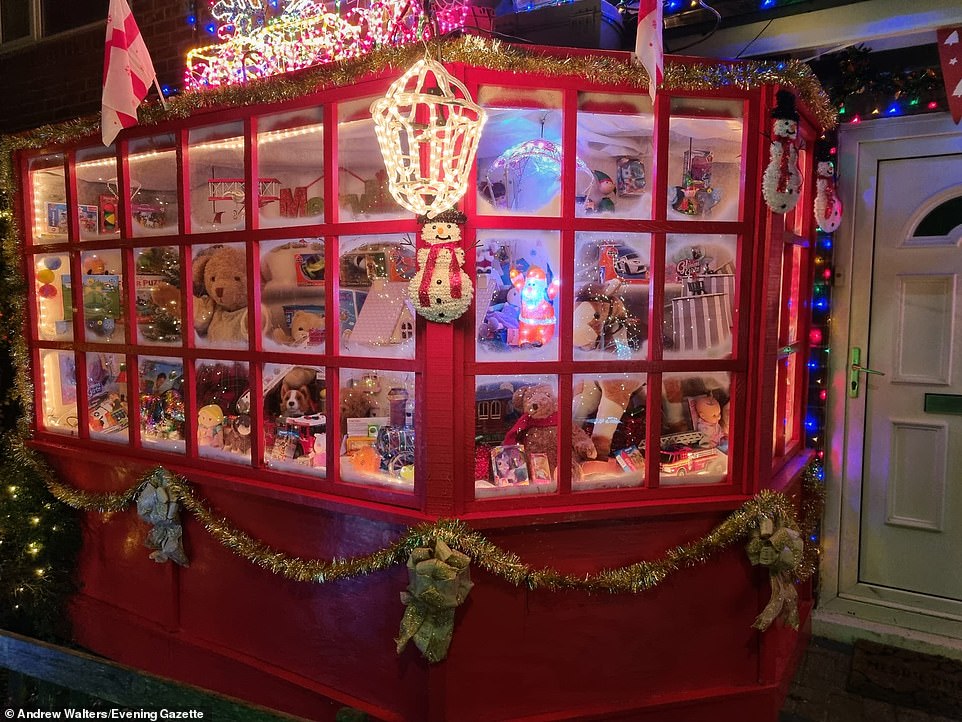 Following the devastating news that his neighbour’s 17-year-old daughter had been diagnosed with Hodgkin’s Lymphoma, Mr Walters decided to dedicate this year’s Christmas light display to her, whilst simultaneously raising money for the Teenage Cancer Trust.

Mr Walters said: ‘Jewson’s has sponsored us this year, and Glenwood’s Paints down in Darlington.

‘I even contacted a lovely company down in Leeds called the Plastic People who donated the Persplex I needed for the toy shop window for free.

‘All the toys in the window are brand new as well, and apart from the odd couple that I’m keeping for next year’s display, all the others will be going to the Women’s Refuge in Stockton after Christmas as well. I couldn’t believe the generosity of businesses and stuff like that.’ 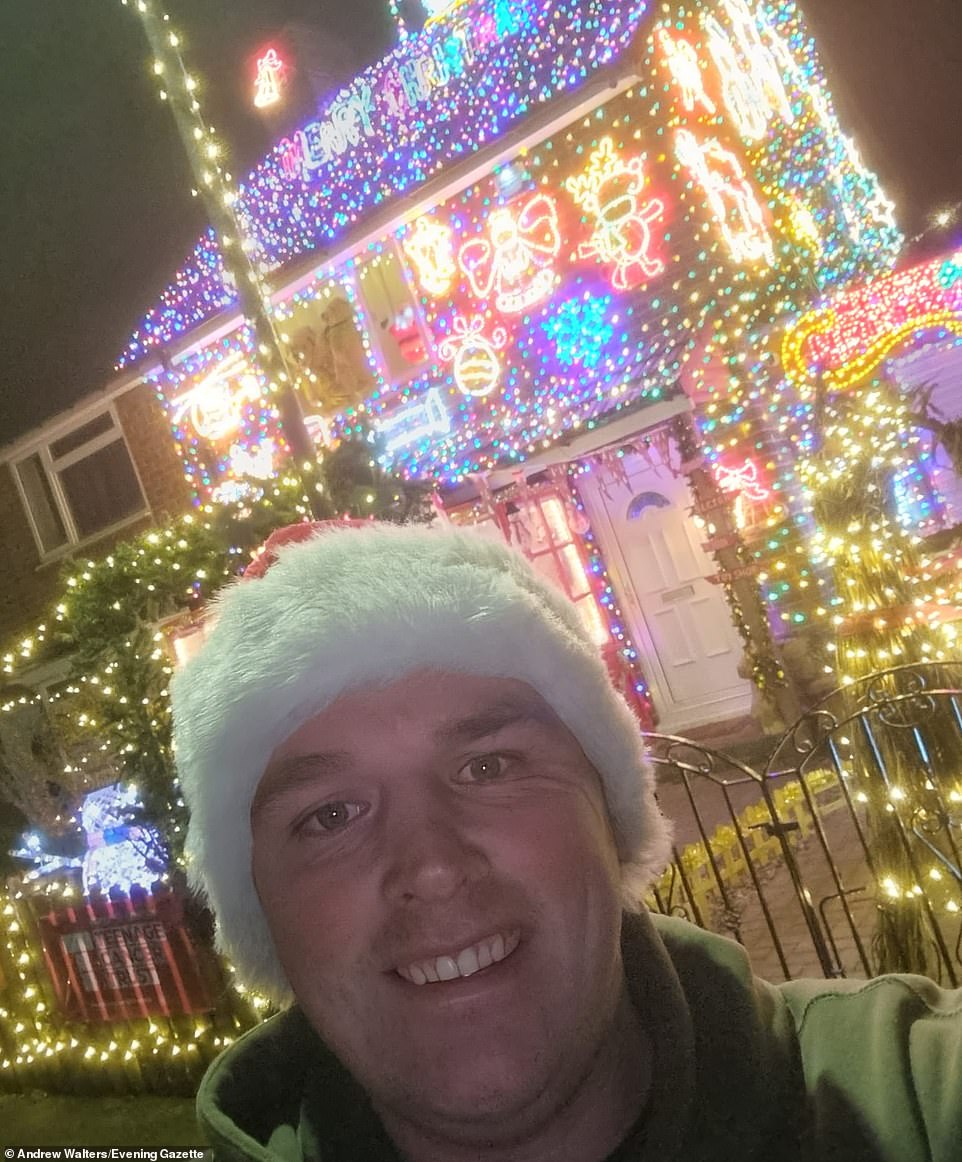 Mr Walters said: ‘It’s just about bringing back the magic for the kids – with the added bonus of raising money for charity too’

Since the grand switch-on last Saturday, Mr Walters has already smashed last year’s target, raising more than £600 for the Teenage Cancer Trust – with all the money going to specialist nurses.

To make launch night more magical, he even went so far as to hire the ‘real’ Santa Claus, who came all the way from Lapland, aka Peterlee, in Mr Walters’ bedazzled car.

Have YOU seen a better display? Send your pictures to [email protected]

He continued: ‘It’s all commercialised and there’s not enough magic for the kids these days, and there are so many Santas and stuff like that which is why I wanted a decent one, so he came all that way for the kids.

‘My friend had come along with her children and she said that the kids were absolutely amazed by it, it’s just about bringing back the magic for the kids – with the added bonus of raising money for charity too.

‘On the switch-on night, as soon as we mentioned the girl over the road, the donation buckets started filling up quicker, her dad was live streaming it to her and she was crying because she loves Christmas but at the moment she’s stuck in the hospital getting treatment.

‘So hopefully she’ll be able to come out at some point before Christmas.’