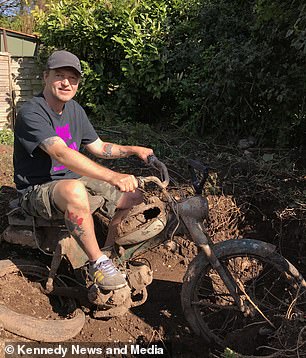 It should have been a run-of-the-mill task to keep himself busy during lockdown.

But a father’s routine gardening job turned into a shock discovery – as he found a Puch motorbike from the 1960s buried beneath his lawn.

Chris Hopkins, 51, from Bromsgrove, Worcestershire, had been digging down for weed free soil for his rockery two weeks ago when he stumbled across the almost entirely intact bike – still featuring headlights, handlebars and front tyre.

The father-of-two, who has lived at his house for eight years with daughters Natasha, 17, and Scarlet, 13, says he was ‘gobsmacked’ by the ‘bonkers’ discovery.

‘I was pretty gobsmacked to find this motorbike in my garden, it’s amazing,’ he said.

‘Looking at it now it looks really good, I just wish I could get it going – that would be brilliant. 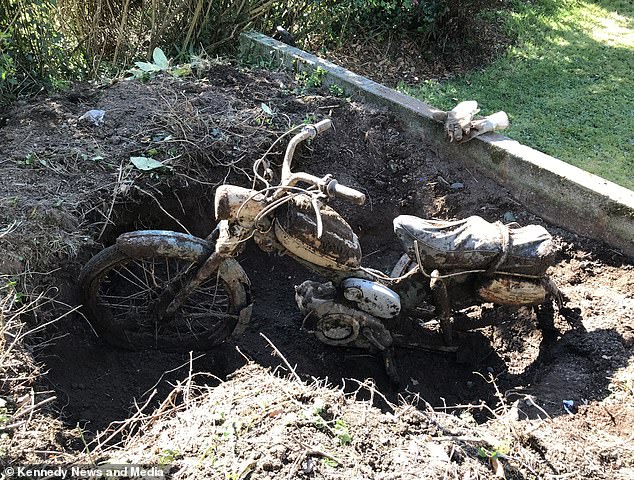 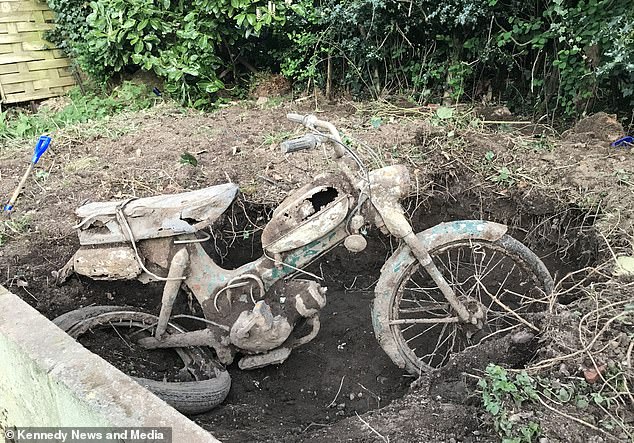 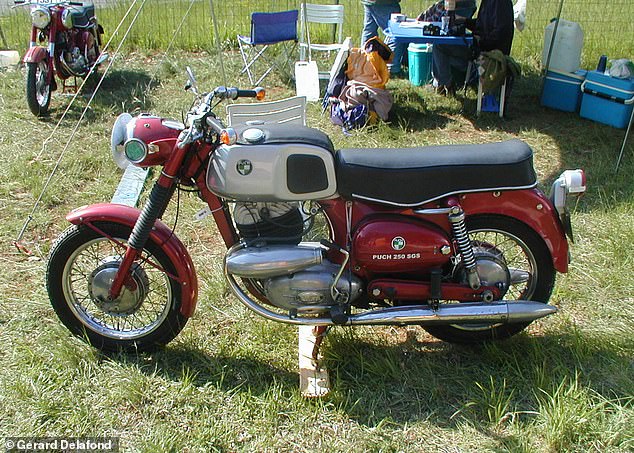 ‘It’s standing up in the hole at the moment. It’s really heavy, and has a steel frame, so I’ll probably need someone to give me a hand to lift it out.

‘I’ve no idea how it got there. But now it looks like someone has put a stick of dynamite and blown a hole in my lawn thanks to the size of the hole it’s sat in.’

Chris, who works as a council housing officer, had been working on his garden over the Bank Holiday weekend to keep himself occupied during the coronavirus lockdown, and decided to create a rockery.

With the help of Natasha and Scarlett, he started digging for fresh earth at the top end of their garden, which had been used as by previous owners of the house as an area to dump garden waste.

While digging for soil, the three suddenly struck metal and came across a wheel – initially thinking it to be an old children’s bike that had been thrown away. 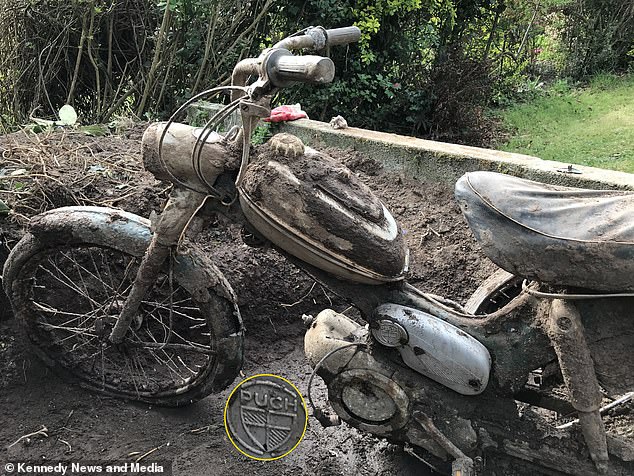 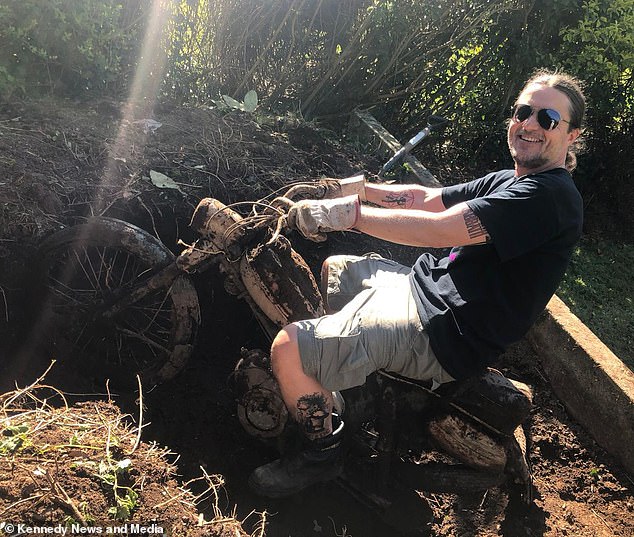 ‘We were digging down in the area with fresh soil and filling buckets then I hit some metal and thought it was a bit intriguing so carried on digging.

‘We dug down about a metre and found a wheel, initially we thought it might just be a children’s bike thrown away donkey’s years ago.

‘Then we found different elements of the bike including parts of the engine, the front wheel, headlights, handlebars and chrome work and realised what it was.’ 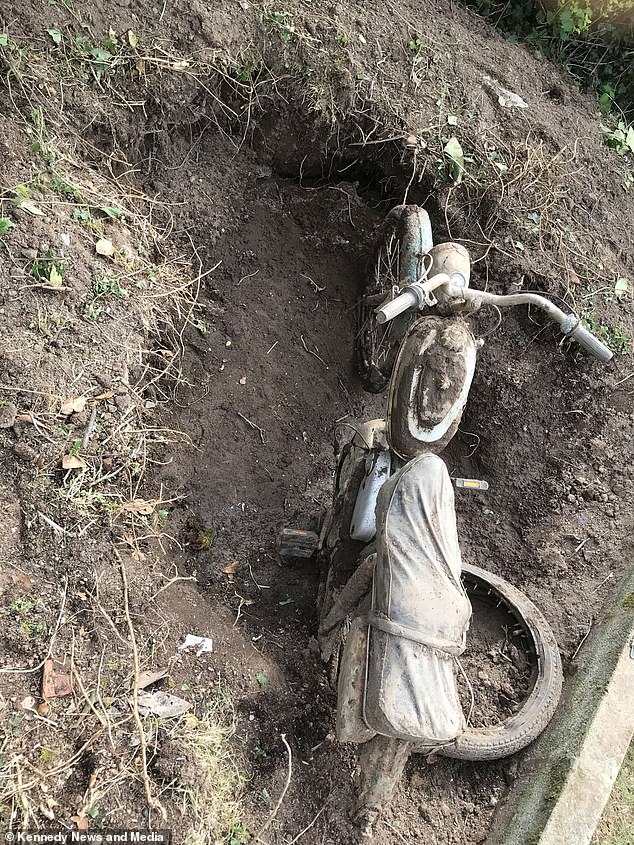 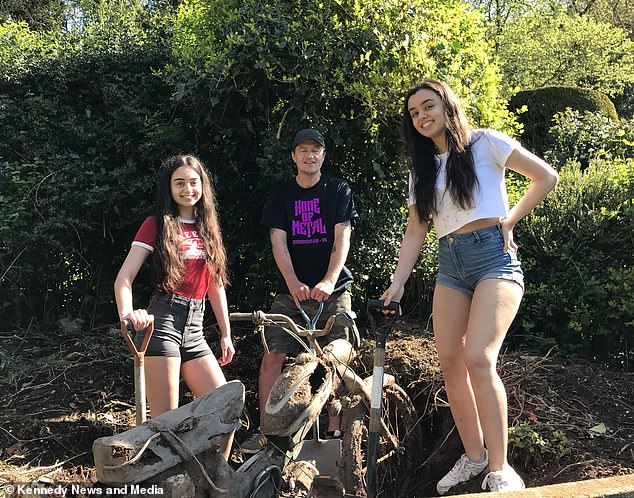 The council housing officer had been digging for fresh soil to create a new rockery with his daughters Scarlett, left, and Natasha, right

Chris is still trying to get to the bottom of how the bike ended up buried under the lawn, admitting that neighbours who have lived nearby for a long time have also drawn a blank.

‘This is the strangest thing I’ve found while gardening without a shadow of a doubt, I wish I knew why it was buried in my garden,’ he added.

‘I did ask my neighbour who’s been here a long time and he’s not aware of anyone who’s lived in this house who’s owned a motorbike.

‘It’s a mystery as yet, but I’ve still got a bit of digging to do.’