A US hospital on Wednesday gave the first infusion of an expensive, controversial new Alzheimer’s drug from Biogen before Medicare had even said what it will pay for – and with some doctors upset by its approval last week.

Mark Archambault, a 70-year-old realtor from Wakefield, Rhode Island, was the first patient treated with the drug, Aduhelm, outside of a clinical trial. His infusion took place in Providence at Butler Hospital’s Memory and Aging Program.

“We are opening a new era in treatment,” Brown University Medical School neurology professor Dr Stephen Salloway told Reuters. He said the Butler Hospital program has around 100 patients likely to be good candidates for the drug, which is given as a monthly intravenous infusion. 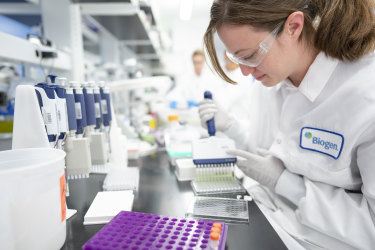 A scientist working on Alzheimer’s research at drugmaker Biogen’s headquarters in Cambridge, Massachusetts. Biogen is one of the companies behind the drug aducanumab.Credit:AP

Aduhelm was approved based on evidence that it can reduce brain plaques, a likely contributor to Alzheimer’s, rather than proof that it slows progression of the fatal mind-wasting disease.

The US Food and Drug Administration approved the drug – despite the strong objection of its own expert advisory panel – for all patients with Alzheimer’s, although Aduhelm has only been tested for patients in the early stages of the disease.

“Hopefully clinicians will follow the clinical trial guidelines, because we really don’t have any evidence for more advanced patients with Alzheimer’s,” Salloway said.

Some doctors are wary even of prescribing Aduhelm for that group.

Dr David Knopman, a neurologist at the Mayo Clinic in Rochester, Minnesota was one of three experts who resigned from the panel of advisors which had recommended that the FDA not approve Biogen’s drug.

Between questionable trial results and potential side effects, Knopman did not see reason for most patients to get the medicine. He said he is walking a line between being paternalistic and honest about his concerns to patients as Mayo prepares to treat them with the new drug.

“I may have talked one person out of using it, he said. “I will turn over some of the responsibility to this team of people we are putting together. They will get my opinion.”

Biogen has estimated around 1.5 million of the 6 million people in the United States with Alzheimer’s would be considered to have early-stage disease.

Cigna Corp Chief Clinical Officer Steve Miller said he expects Cigna, as well as other health insurers and Medicare, will only agree to cover the drug for patients with early Alzheimer’s.

Biogen, which is partnered on the drug with Japanese drugmaker Eisai Co Ltd, has set an average price of $56,000 ($72,000) a year, which the Alzheimer’s Association – a longtime outspoken supporter of Biogen – called “simply unacceptable.”