Four vegetable pickers have fled the farm where 75 people working and living on the site in trailers tested positive for coronavirus.

Following the mass outbreak yesterday, a total of 200 staff working for the vegetable producers have been ordered to self-isolate as a precaution.

Two of the farm workers, one of whom had the virus, are reported to have left on Saturday while the other two, who also tested positive for Covid-19, left the scene today, a source told The Sun Online. 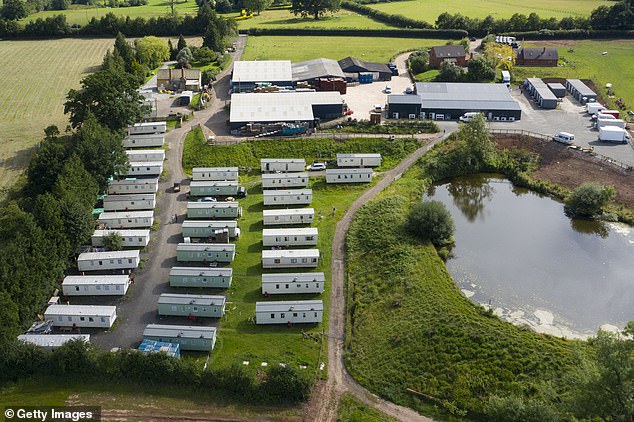 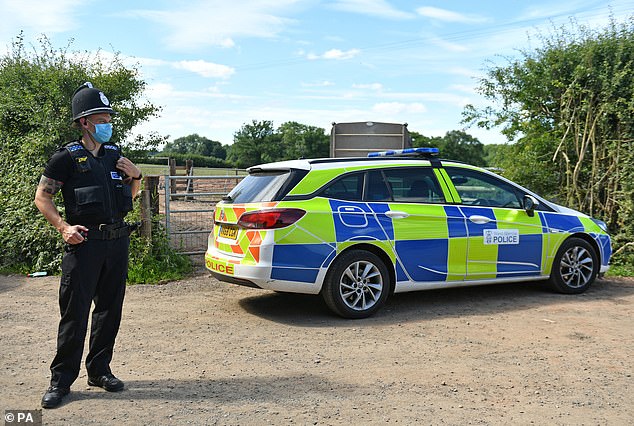 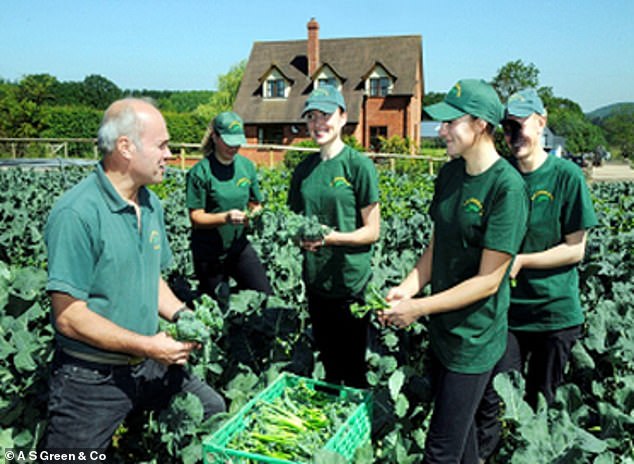 According to the source, the first case was reported to the farm on Wednesday and another five tested positive the day after.

By the time it was locked down the farm had a total of 72 cases however it has now risen to 75, the source added.

In an attempt to keep workers local authorities are said to be keeping their passports ‘secure’ and offering ‘beer and cigarettes’, according to the paper.

The workers, most of whom are from Eastern Europe, are employed to carry out picking and packing work at the site, located to the south-west of Worcester and east of Hereford, while living in mobile homes on Rook Row Farm.

Following the outbreak police, wearing protective face masks, have been seen guarding the exits of the farm and Herefordshire Council has organised the supply of deliveries.

Workers have also been told they are not be permitted to leave the site but they are receiving the required support – with officials treating the group as ‘one extended bubble’.

Visitors and management team members were also tested and the company confirmed all results to date outside of their site have been negative.

The company has put in place a range of infection control measures to try to reduce the risk of staff being exposed to the virus.

These include supporting testing, promoting social distancing in communal social areas and the indoor packaging areas.

They are also providing PPE for staff where applicable, encouraging regular hand washing for at least 20 seconds and promoting the use of face coverings in closed areas.

During the harvest season, workers live onsite in mobile homes which all have toilets, showers and kitchen facilities and participants share the accommodation. 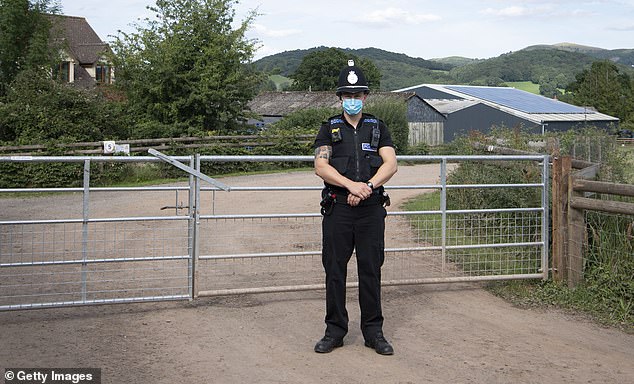 An officer wearing a face mask stands at the entrance to AS Green and Co Farm, where employees have tested positive for Covid-19 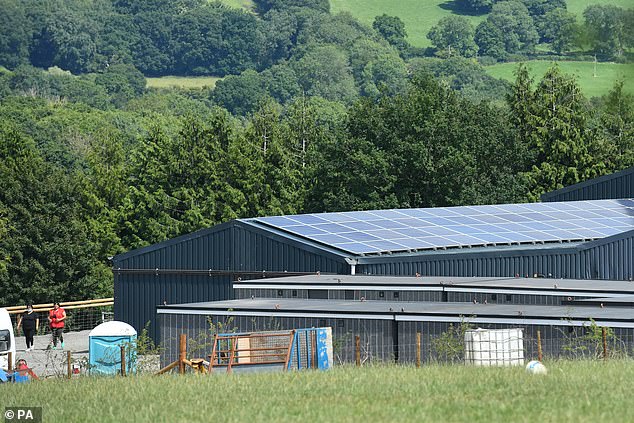 Rook Row Farm is currently closed for all visitors and workers are receiving support required on the site, the company said in a statement 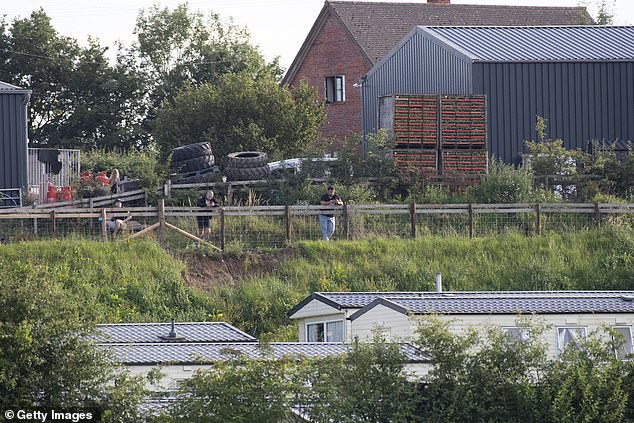 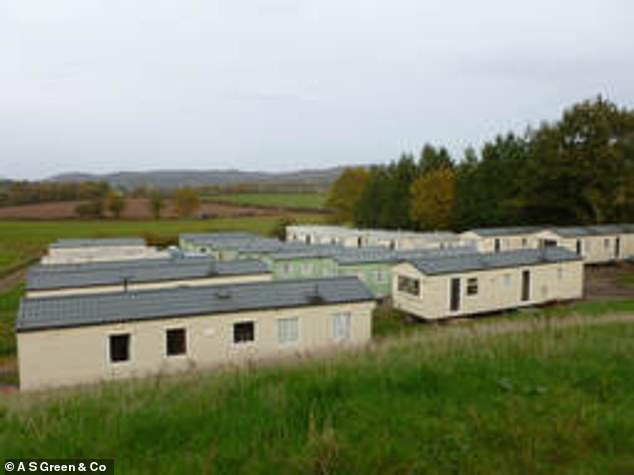 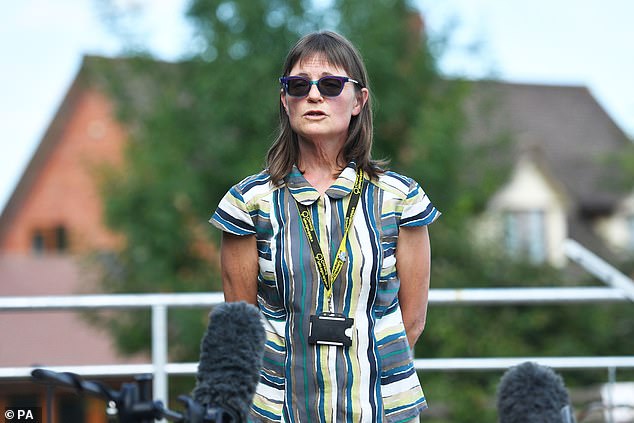 Director of Public Health at Herefordshire CCG speaks outside Rook Row Farm in Mathon, near Malvern

As a precaution the whole group are being treated as ‘one extended bubble’, according to officials.

Herefordshire Council is arranging food and essential supplies for residents on the site while they self-isolate.

It comes after farmers appealed for people to take up paid roles on local farms to stop food being left to rot in the fields as part of the Feed The Nation campaign.

The owner of A S Green And Co was looking for 100 pickers and 60 packers to join their family team at the end of April, the Hereford Times reported.

In a previous statement posted on its website, the company said: ‘We confirm that we are working closely with, Public Health England and the Public Health team at Herefordshire Council to support a number of our workers that have tested positive for COVID-19.

‘As a precautionary measure we have arranged for testing of additional key workers including management team members and visitors connected with A S Green and can confirm all results to date outside of our site have been returned with negative results. To date there are 73 positive cases on our site.

‘Our site is currently closed for all visitors and with the assistance of the various bodies no workers are being permitted to leave our site and are receiving the required support at our site.

‘Our work force and local community are our priority at this difficult time and we continue to follow the guidance of the relevant bodies to ensure that the spread of the virus is controlled and our workforce is supported.

‘Public Health England advises that it is very unlikely Covid-19 can be transmitted through food or food packaging, so shoppers can remain confident buying British fruit and veg.

‘Thank you for your understanding in these difficult times.’ 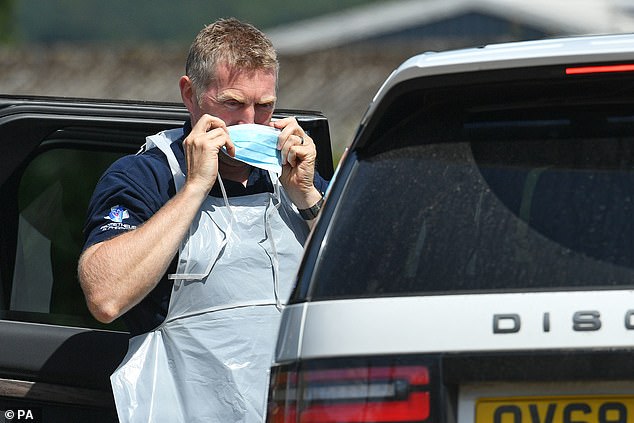 A man puts on PPE as he arrives at Rook Row Farm in Mathon, near Malvern in Herefordshire

Katie Spence, PHE Midlands Health Protection Director, said: ‘We are working closely with the management at AS Green and Co to support the health and wellbeing of their workforce and wider public health.

‘At this phase of the pandemic, we still expect to see cases in the community and within settings where people are closer together, such as workplaces, which is why the Test and Trace system is important, to help us pick up on any potential problems and swiftly to take remedial action to reduce spread.

‘To support this workforce of around 200 key workers, the company has put in place a range of infection control measures to try to reduce the risk of staff being exposed to COVID-19.

‘Measures include supporting testing on site, promoting social distancing in communal social areas and in the indoor packaging area; providing PPE for staff where applicable, encouraging regular handwashing for at least 20 seconds, and promoting the use of face coverings in closed areas.’

‘Despite these measures, a small number of workers became symptomatic earlier this week and they and a few close contacts among the workforce were tested initially and found to be positive.

‘In line with NHS guidance, affected individuals were asked to self-isolate for 7 days, with their households and close contacts asked to isolate for 14 days.’

‘As we have seen a global trend of large food producers being subject to outbreaks, as a precautionary measure, the decision was made to test the entire workforce. 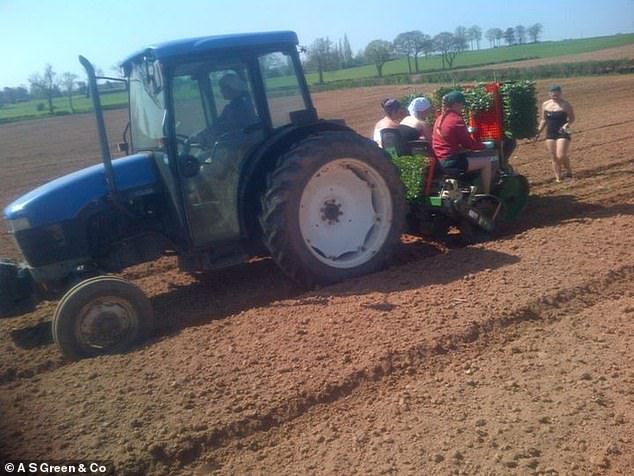 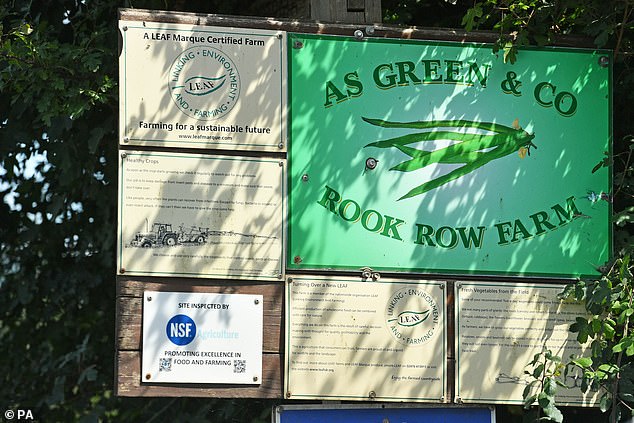 ‘The initial batch of results showed a significant percentage of positive cases, despite these individuals being asymptomatic.

‘We are still awaiting a few final results, but currently we have 73 positive cases of COVID-19 among the workforce.’

‘PHE Midlands and Herefordshire Council are therefore working with AS Green and Co to closely monitor and manage the outbreak and support individual workers.’

A spokesperson for AS Green said: ‘Our staff are our priority, they are hard-working key workers helping us provide food for the country during these unusual times.

‘We contacted PHE and we are working closely with them and Public Health at Herefordshire Council to prevent the spread of COVID-19.’ 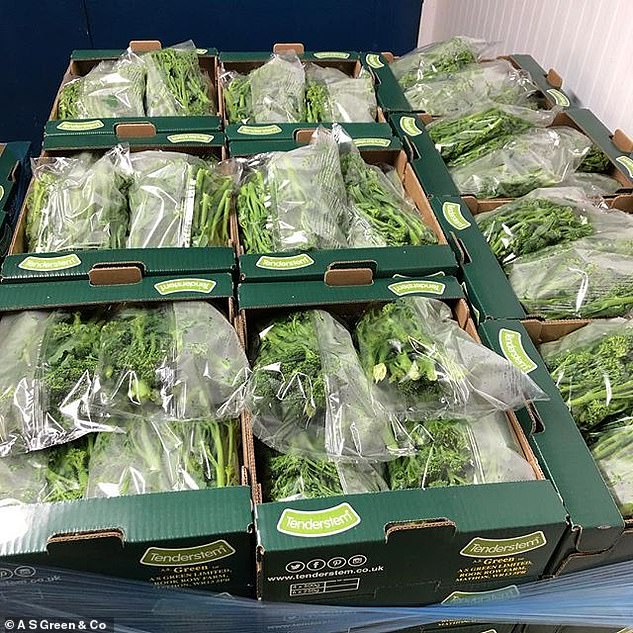 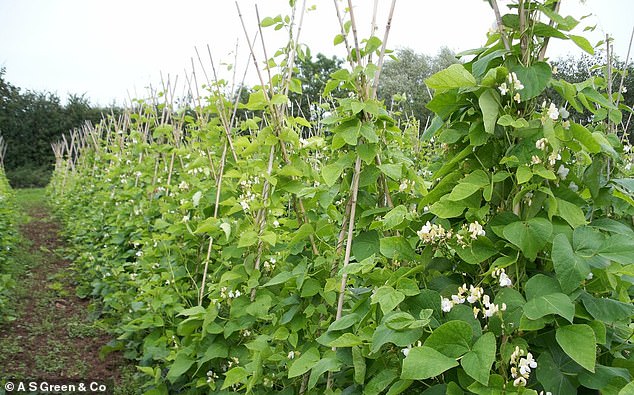 Karen Wright, Director of Public Health for Herefordshire, said: ‘While Herefordshire is the first to experience an outbreak of this kind, this is not unexpected.

‘Our priority is to protect the health and wellbeing of all residents in our community. Prompt testing on the farm has allowed us to understand transmission and control the spread of infection.

‘We continue to support the farm management, their workers – who form an important part of our local economy, and the local community through this challenging time.

‘Anyone who has a fever, persistent dry cough, or loss or change in their sense of taste or smell should call 119 or go online to arrange a test.’

Herefordshire have had 809 confirmed cases of the virus, with a rate of 421.1 (per 100,000 resident population), according to the Government’s daily statistics published last night around 6pm. 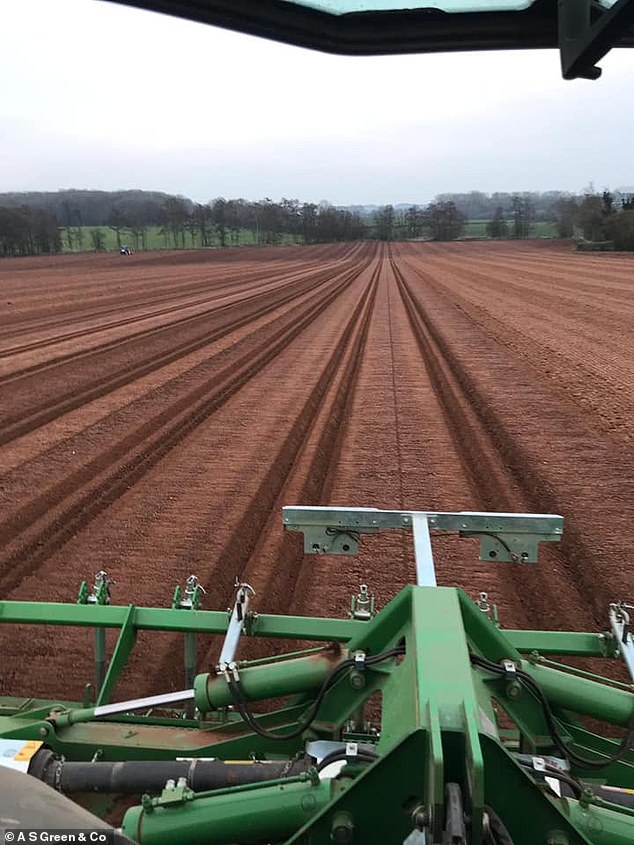 In April Andrew Green, owner of AS Green and Co, told the Hereford Times: ‘The coronavirus pandemic has resulted in soaring demand for fresh produce, but with tighter border controls and travel restrictions in place, many UK farmers have been left with a labour shortage, putting their produce at risk.’

He added: ‘Not only does the role provide the opportunity to work in a safe, healthy environment throughout the summer months, but it also enables those who have been financially impacted by the pandemic to boost their income, without jeopardising the support they will receive through the Government furlough scheme.’

Following the Pick for Britain campaign – an initiative to bring together UK workers and farmers together to prevent crops rotting in the ground during the pandemic – the farm said it had received more than 300 applications.

On the firm’s website, it says workers are expected to share accommodation at Rook Row Farm, while there is a recreational building with a pool table, dart board and TV for all employees.

A spokeswoman for the National Farmers’ Union (NFU) said: ‘The industry takes this issue incredibly seriously and everything is being done to keep workers safe; their health and safety remains the priority.

‘Across the sector there have been significant investments this season; from the use of additional safety equipment and PPE, regularly testing temperatures, and following government guidance created specifically for seasonal workers.’

Karen Wright, director of public health for Herefordshire, urged anyone experiencing any symptoms of Covid-19 to arrange a test.

‘While Herefordshire is the first to experience an outbreak of this kind, this is not unexpected,’ she said in a statement.

‘Our priority is to protect the health and well-being of all residents in our community.

‘Prompt testing on the farm has allowed us to understand transmission and control the spread of infection.

‘We continue to support the farm management, their workers – who form an important part of our local economy, and the local community through this challenging time.’

The outbreak comes after lockdown was extended for at least two weeks in Leicester, east midlands, after a surge in coronavirus cases.

The R rate represents the average number of people each Covid-19 patient infects and SAGE admitted it could be one or higher in London, the Midlands, the North East and Yorkshire, the South East and the South West.