Francis Bacon triptych sells for $84m at auction amid coronavirus

A triptych by Francis Bacon sold for $84.6million at a Sotheby’s auction life-streamed to bidders worldwide yesterday.

The British artist’s work, inspired by Greek playwright Aeschylus’s Oresteia, is one of 28 large scale paintings in three parts created by Bacon between 1962 and 1991.

Last month the auction house announced it would be streaming a series of modern and contemporary art sales from London instead. 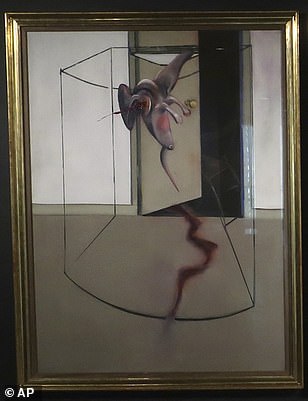 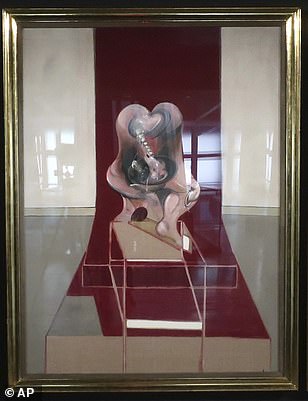 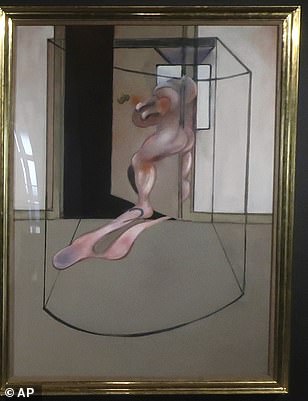 Francis Bacon’s work, inspired by Greek playwright Aeschylus’s Oresteia, is one of 28 large scale paintings in three parts created by Bacon between 1962 and 1991

Bacon’s triptych previously belonged to a Norwegian art collector and had an estimated value of $60-$80million.

Describing the event as ‘an historic evening’, Chairman for Sotheby’s Europe Oliver Barker introduced the auction, the first of its magnitude to be held without an audience.

A bidding war raged for around 10 minutes between one potential buyer placing bids online from China, and another – who was victorious, but chose to remain anonymous – making counter-offers on the phone to a Sotheby’s specialist in New York.

Another Bacon triptych, ‘Three Studies of Lucian Freud,’ sold in 2013 for $142.4 million at Christie’s in New York, making it one of the 10 most expensive paintings ever sold at auction. 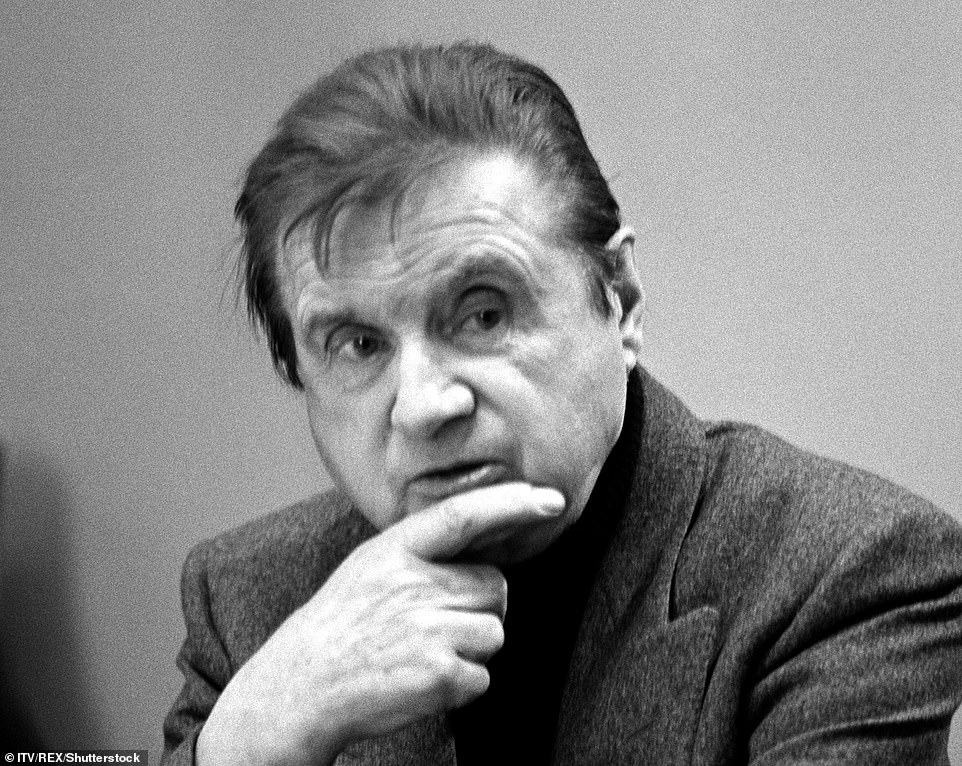 Sotheby’s and Christie’s 20th Century spring auctions’ sales usually occur at the same time, but Christie’s announced earlier this month that it would hold its sale on July 10 this year.

While online bids have until now rarely exceeded $5 million, Jean-Michel Basquiat’s drawing of a head, ‘Untitled (Head)’ sold for $15.2 million on Monday – a new Sotheby’s record for an online purchase – and a painting by Joan Mitchell, ‘Garden Party,’ went for $7.9 million.

The event brought in a total of $363.2 million, the auction house said.

It comes after it was revealed rich people are dropping millions of dollars on jewelry as pick-me-ups during the coronavirus pandemic and are wearing them at home for ‘joy’. 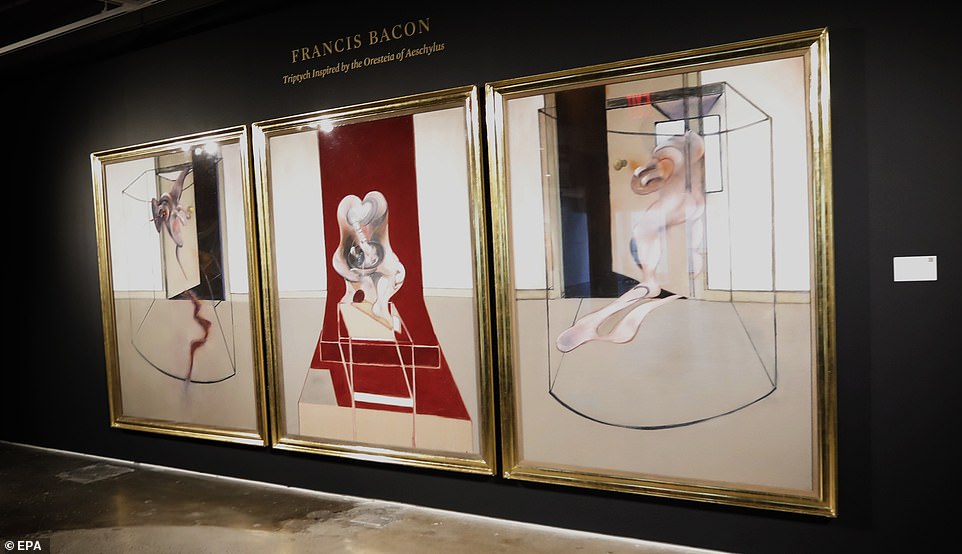 A bidding war raged for around 10 minutes between one potential buyer placing bids online from China, and another – who was victorious, but chose to remain anonymous – making counter-offers on the phone to a Sotheby’s specialist in New York

According to Sotheby’s, the lockdown and economic uncertainty of the entire country has done nothing to slow down the sale of luxury jewelry.

Auctioneers feared that the end of in-person auctions might stunt sales, but the opposite has happened.

‘They’re wearing their big diamonds inside their homes because it brings joy,’ Catharine Becket, a ‘magnificent jewels’ expert at Sotheby’s, told Bloomberg.

They also see the jewels as a reminder that the lockdown might not last forever. 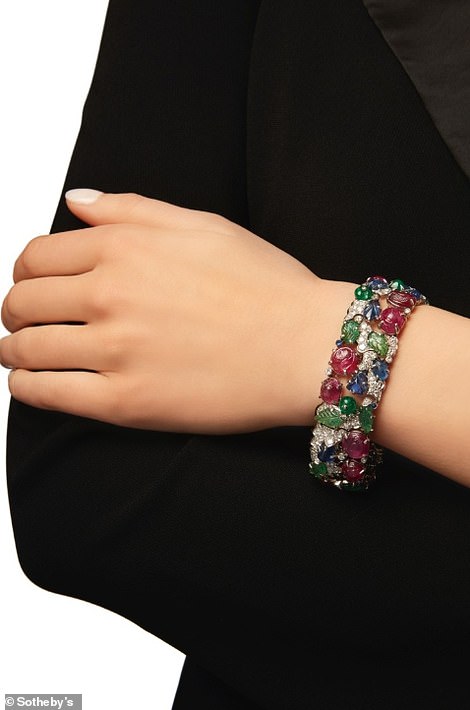 ‘Everyone is waiting for this to be over, and I suppose knowing that a million-dollar piece of jewelry is waiting for you is a fulfillment of when things return to the new normal,’ she said.

Of the four online sales Sotheby’s has held since the beginning of March, 92 percent have sold out and 61 percent of the lots exceeded estimates.

They brought in $6.1million, considerably higher than their combined estimate of $5.7million.

‘What we’re finding is that anything of good quality is performing well and actually better than it would have just a couple of months ago,’ she said.

Becket said it gave her the confidence to convince a client to list a rare Cartier bracelet for sale.

It was created in around 1930 and had never been sold at auction, having been passed down through descendants of an American family for more than 30 years.

‘The result achieved for this bracelet is testament to the fact that, even under the most challenging of circumstances, the demand for great art endures,’ said Catharine Becket, head of Sotheby’s Magnificent Jewels Auctions in New York.

‘Tutti Frutti jewels have always held a special allure for collectors, capturing the West’s fascination with the ‘exotic’ at a time when travel was relatively limited, much as it is today.

‘Now, of course, we can connect with the touch of a button, which allowed us to engage with bidders worldwide.’ 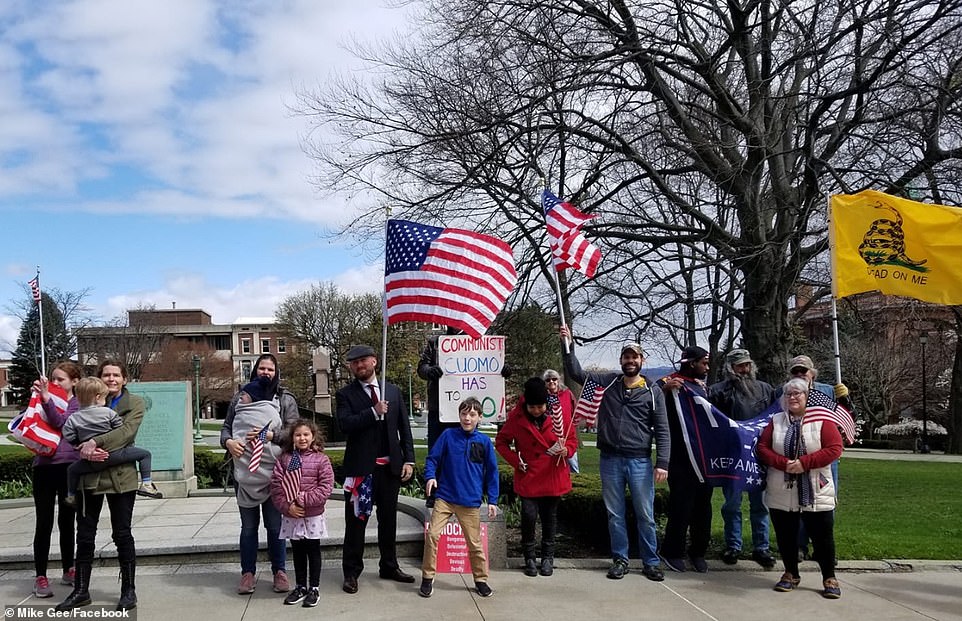 By contrast, thousands are protesting across the country to be allowed to return to work despite the ongoing pandemic

Sotheby’s describes the jewel as an exceptional example of the multi-gem, Indian-themed pieces that Cartier first created during the height of the Art Deco era.

The success of the online auctions disproves the notion that people are unwilling to spend millions on jewelry without ever viewing the pieces.

‘If these kind of pieces continue to do well, it will mean the pandemic has forced us to arrive at the place we were heading anyway, where people have become more and more comfortable buying things online, sight unseen,’ Becket said.

Those sales come as millions around the country struggle without paychecks after suddenly losing their jobs as a result of the pandemic.

Thousands have started protesting around the country, claiming they would rather risk their health than go another minute without a paycheck.

The federal government has given stimulus checks of up to $1,200 to try to ease the strain and they have boosted unemployment benefits by up to $600 a week.

But there has been a litany of problems in people actually receiving the money, from system backlogs to mistakes in the banking system.

Pregnant Mena Suvari Says 'Nothing Else Matters' as She Prepares for Son: 'He'll Come First'

Mena Suvari can't wait for her baby boy! The Don't Tell a Soul actress, 41, is expecting her first child with husband Michael Hope, son Christopher Alexander, and she tells Entertainment Tonight that she feels "really lucky" to be entering motherhood soon. "It truly feels like the most important thing that I will ever do in my life. Like, nothing else matters. Everything just […]

END_OF_DOCUMENT_TOKEN_TO_BE_REPLACED

INTER MILAN are reportedly set to undergo a name change to celebrate their 113th anniversary. La Gazzetta dello Sport claim the Serie A giants will switch from Football Club Internazionale Milano to simply Inter Milano. The report adds that the move is designed to modernise the club as well as reflect a closer connection with Italy's capital. The change is said […]

END_OF_DOCUMENT_TOKEN_TO_BE_REPLACED

END_OF_DOCUMENT_TOKEN_TO_BE_REPLACED
This website uses cookies to improve your user experience and to provide you with advertisements that are relevant to your interests. By continuing to browse the site you are agreeing to our use of cookies.Ok