John Stonehouse is in Pentridge this morning on a hunger strike. The British Member of Parliament was arrested yesterday as he tried to leave Australia on a British Airways Jet.

Stonehouse was charged in the Melbourne Magistrate’s Court yesterday afternoon with obstructing the course of justice. He was refused bail. 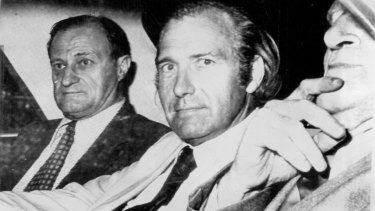 Stonehouse (centre) being driven by police from his apartment in the Centre City Club, Melbourne.Credit:The Age Archives

He has been on bail pending extradition proceedings in the Melbourne Magistrate’s Court on Friday relating to charges of fraud and theft involving about $250,000.

Stonehouse said he was returning to London to attend a session of the House of Commons in which his future will be decided.

In a day of dramatic events: 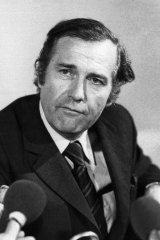 Prison sources said he later refused his first meal. Yesterday, close friends and associates said Stonehouse had told them he would go on a hunger strike in gaol.

The drama began in the City Court yesterday morning when Stonehouse —dapper in a dark pin-stripe suit, blue-striped shirt and bright tie — argued with Mr. Thompson.

In the meantime Stonehouse had gone to the international airport at Tullamatine where he checked his ticket and passed through customs surrounded by a bustling private army of newspaper, radio and television reporters and camera crews.

But seconds before he tried to board flight 931 with his daughter Jane and son, Matthew, Inspector Robert Gillespie of the Commonwealth Police stepped forward and arrested him.

Shortly after Inspector Gillespie and two other detectives took Stonehouse into custody he was escorted along the passenger disembarkation corridor. Stonehouse was shouting and waving to watching journalists and appeared to be struggling with the policemen who had strong holds on his arms.

He was not seen again until he appeared in the dock of the City Court.

At his morning appearance in the court Stonehouse leapt to his feet and said loudly: “Your Worship, may I plead your indulgence on a matter of extreme importance?”

He then asked Mr. Thompson to hear the extradition proceedings immediately so that he could be in London in time to attend the debate in the House of Commons.

Mr. Thompson refused. He told Stonehouse he was not ready to proceed himself and could not proceed because there were no representatives of the Commonwealth in court.

When Stonehouse continued to argue Mr. Thompson threatened to deal with him for contempt of court.

Outside the court, Stonehouse said he had no alternative but to go to the airport to catch a plane to London so he could take his place in the House of Commons.

Inspector Gillespie told the court he and two other policemen had approached Stonehouse in a holding room at Tullamarine.

He said Stonehouse had run up a flight of stairs. He had followed him and said: “It is obvious you intend leaving Australia.” Stonehouse had said: “I intend to get this aircraft to London with my children.”

Inspector Gillespie said then when he put to Stonehouse that he was the subject of judicial proceedings at the Melbourne Magistrates Court, Stonehouse turned his back and refused to answer.

Gillespie said Stonehouse had attempted to return down the stairs and spoke to his children. He said Jane Stonehouse had said: “Daddy, you’ve gone as far as you can go, you might as well submit.”

In CANBERRA, Commissioner J. M. Davis, of the Australian Police, last night said his officers had acted after consultation with the Attorney-General’s Department.

A spokesman for the Attorney-General (Mr. Enderby) said the incident was purely a department matter. Mr. Enderby had given no orders.

He said the British Government had requested Mr. Stonehouse’s extradition and that was now happening. His department’s only concern was that Mr. Stonehouse appear in court on Friday as scheduled for the extradition proceedings.