Boris is right to ‘build, build, build’, to kick-start the economy. But, I fear that, unless he is careful, he could be building an environmental disaster.

Much of what the characteristically bullish Prime Minister announced in his well-trailed planning speech yesterday is thoroughly welcome. Much of the rest was unexceptional, focused on development of towns and cities. Yet I fear it may soon presage highly controversial concreting of the countryside.

But first let’s applaud Mr Johnson’s promise to ‘end the chronic failure of the British state… to build enough homes’. As he said, it is a scandal that we have been building half as many homes per head as France.

It is an even greater one that the number of Britons in rented accommodation has more than doubled, to well over five million, since the turn of the millennium. 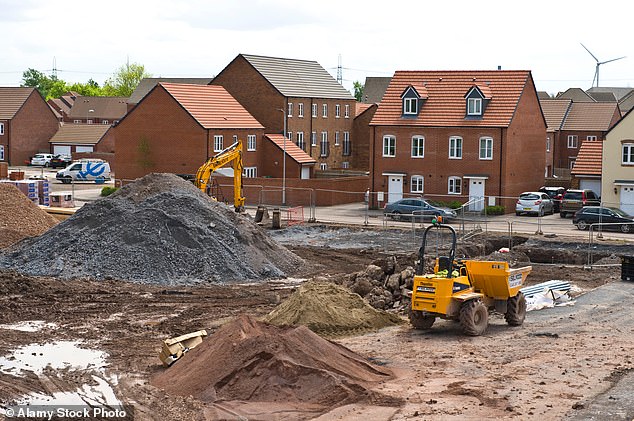 Boris is right to ‘build, build, build’, to kick-start the economy. But, I fear that, unless he is careful, he could be building an environmental disaster

And it’s true that housebuilding can be a vital spur to desperately-needed growth: constructing hundreds of thousands of dwellings helped Britain out of the great 1930s depression.

Who could fail to welcome the Prime Minister’s pledge to ‘build back better, build back greener, and build back faster’? Or his intention to back the construction of 180,000 affordable homes, including some earmarked for first-time buyers?

Or his commitments to putting up ‘fantastic new homes on brownfield sites’ and making them ‘beautiful and low carbon’ – all necessities shamefully neglected by recent governments.

Specific changes to planning rules, announced yesterday for September, don’t seem unreasonable, provided care is taken. Making it easier to turn shops into homes, offices or cafés, for example, could help revive town centres, so long as this is not allowed to ruin their character. 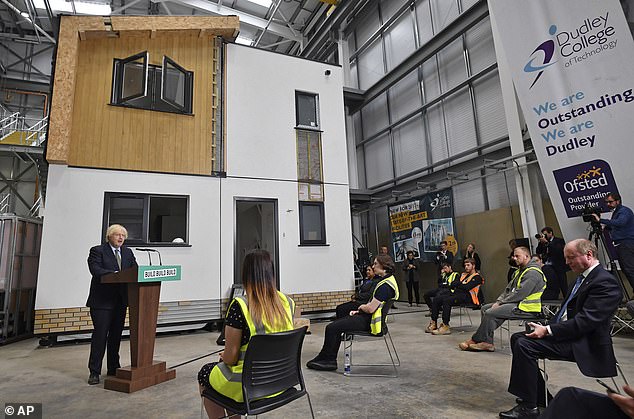 Specific changes to planning rules, announced yesterday for September, don’t seem unreasonable, provided care is taken. Making it easier to turn shops into homes, offices or cafés, for example, could help revive town centres, so long as this is not allowed to ruin their character

Allowing people to build additional space above their properties could provide more accommodation, but also deprive neighbours of light.

The problem, however, is that we cannot be sure that Mr Johnson has given us the whole picture. Indeed we can be pretty certain he has not. For just one clause in his speech mentions a much greater change due next month, ‘the most radical reforms of our planning system since the end of the Second World War’.

He gave no detail. But there are ominous indications of what is coming down the line. Officially, Housing Secretary Robert Jenrick – in the midst of his own controversy over Richard Desmond’s proposed Docklands development – says ‘it is time to rethink planning from first principles’. Unofficial predictions are starker.

The reforms are forecast to ‘take an axe’ to what Dominic Cummings is said to call the ‘appalling’ planning system. He and Jenrick are reported to be backing changes that would ‘fast-track’ giant estates of more than 1,000 houses and – in a profoundly undemocratic move – remove key decisions from elected councils and hand them to development corporations. 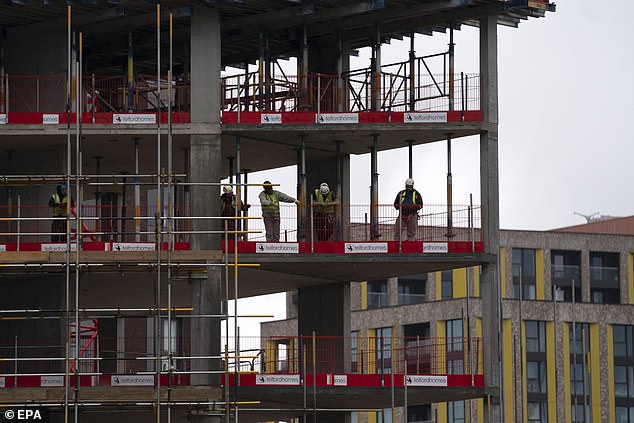 The problem, however, is that we cannot be sure that Mr Johnson has given us the whole picture. Indeed we can be pretty certain he has not. Pictured: Construction workers on site at Nine Elms, Central London

Already councils are warning of a developers’ ‘free-for-all’. The developers themselves, who have given £11million to the Conservative party under Mr Johnson’s premiership, are predictably cheering the changes on.

This is politically dangerous. The last time a Tory government tried to relax planning laws, much more mildly, in the early 2010s, 50 of its MPs set up a group to defend the countryside from ‘developers simply looking for a quick profit’, and it had to change course.

Now things are even more explosive. Communities all over the country are up in arms over unwanted development. Which is one reason the Conservatives lost control of councils in the last local elections. More than 30 new towns are planned for open countryside from Cumbria to Kent, without appropriate infrastructure.

Meanwhile, Britain’s supposedly protected Green Belts are threatened by a record 450,000 houses. Ominously, despite many previous promises to safeguard these cherished areas, Mr Johnson did not mention them yesterday.

And it’s all likely to be for nothing. For planning – bureaucratic, slow, and annoying though it can be – is not the reason too few houses are being built. Developers are sitting on enough sites with planning permission to build more than 400,000 homes, enough – if built in a traditional terrace – to reach from London to Rome. They hold on to them as land prices go up, while badgering planners to give them even more.

Boris Johnson should stick to yesterday’s speech and concentrate on building affordable houses on abundant brownfield land in existing settlements, where the necessary infrastructure is already in place. And he should abandon the hidden agenda which could destroy the countryside.

Geoffrey Lean is an environment analyst.

END_OF_DOCUMENT_TOKEN_TO_BE_REPLACED

END_OF_DOCUMENT_TOKEN_TO_BE_REPLACED
This website uses cookies to improve your user experience and to provide you with advertisements that are relevant to your interests. By continuing to browse the site you are agreeing to our use of cookies.Ok