Germany will lift restrictions on travelling in Europe from mid-June

Germany could ease restrictions on travel within Europe by the middle of June and drop social distancing altogether before July, government sources have said.

Chancellor Angela Merkel is preparing for talks with regional leaders about the next steps in easing the country’s lockdown, which has already seen most businesses reopen along with some bars and gyms.

Ministers are said to be pushing for travel restrictions to mainland Europe – as well as the UK and Iceland – to be lifted as early as June 15. 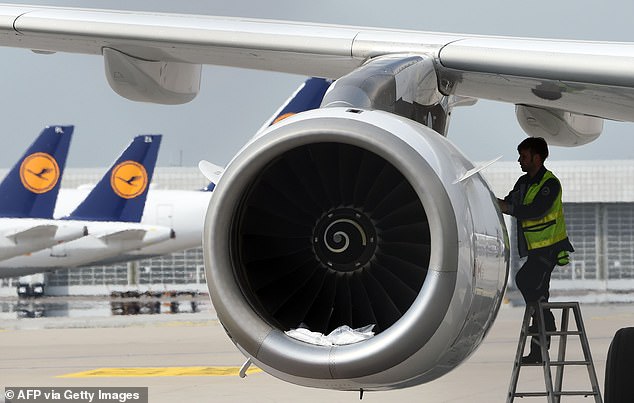 Social distancing guidelines could then be scrapped from June 29, a week earlier than originally planned.

It comes after Germany began easing its lockdown measures in April without seeing a spike in either cases or deaths.

The country’s ‘R’ number – or the number of people the average patient infects – has largely remained below 1 since the start of the month.

A number below 1 means the virus is in remission and the number of cases and deaths will slowly fall.

European leaders have said that restarting tourism is a priority as lockdowns ease, with the industry worth billions to the continent’s economy.

Mrs Merkel has been widely praised for spearheading one of the world’s most successful coronavirus responses.

The country had confirmed 179,002 cases of the virus on Tuesday – one of the highest world totals but thanks largely to a rigorous testing regime. 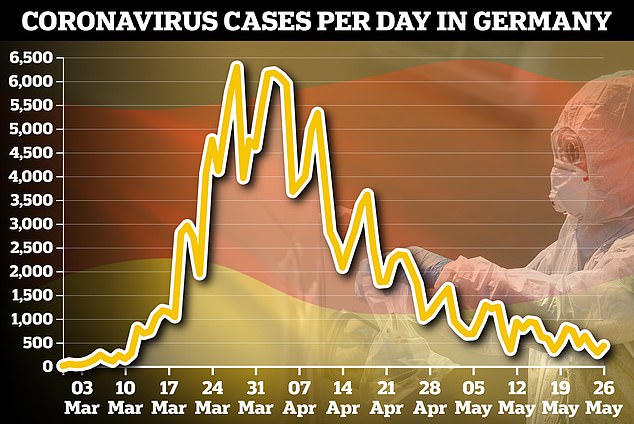 It comes after Germany began easing its lockdown in April, and has seen no spike in daily cases since then (pictured, a graph of the country’s daily case totals) 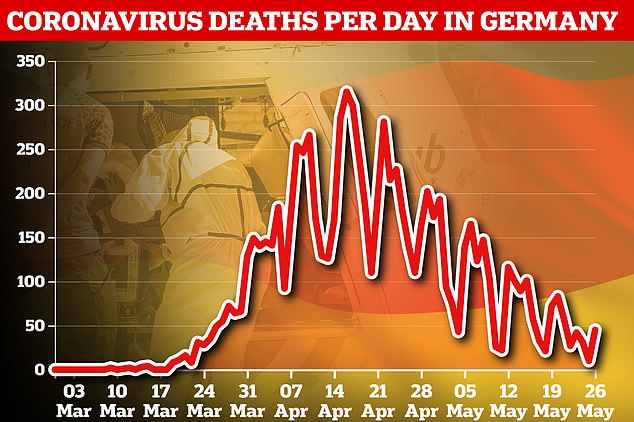 Germany has also seen a steady decline in its daily death totals despite easing lockdown in April, leading to calls for the process to speed up

Meanwhile its death toll stands at just 8,302, one of the lowest totals of any major world country.

Faced with the prospect of overseeing the country’s largest recession since the Second World War, leaders are pushing Mrs Merkel to capitalise on the success of her response by opening as swiftly as possible.

But she has been urging caution, fearing a second and potentially larger spike in cases and deaths if measures are eased too soon.

She is due to meet with regional leaders on Wednesday to discuss next steps.

Markus Soeder, premier of Bavaria, the hardest-hit state, has voiced opposition to moving too fast in reopening tourism.

‘We have in Italy, Spain and France completely different infection numbers compared to Germany so I ask the federal government to think very carefully about this,’ he said.

‘Nobody should be fooled. Corona remains deadly,’ Soeder said.

In cautioning against lifting lockdown too fast, he has found himself butting heads in recent days with Bodo Ramelow, the leader of Thuringia state. 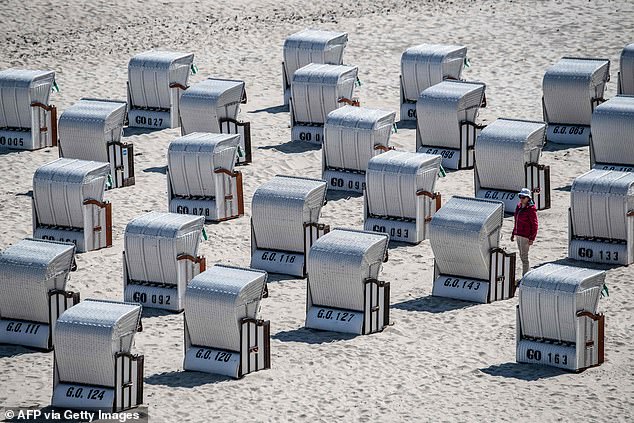 Europe is desperately trying to salvage some of the summer tourist season which is worth billions to the continent’s economy (pictured, socially distanced booths on a German beach)

He has proposed dropping all lockdown rules immediately, in favour of a voluntary system where people can choose which safety measures they want to take.

Under Germany’s federal system, individual states can decide which measures to enforce.

The Bild daily said Merkel, under pressure from state premiers, had agreed to advance the date that social distancing should be relaxed to June 29 from July 5, citing a draft document still to be agreed.

The move to restart tourism to Europe also comes after the government agreed an £8billion bailout with state airline Lufthansa.

Germany’s finance and economy ministries said on Monday that Lufthansa had been operationally healthy and profitable with good prospects but had run into trouble because of the pandemic.

‘The support that we’re preparing here is for a limited period,’ the finance minister, Olaf Scholz, said of the deal, under which Germany is buying new shares at the nominal value of €2.56 apiece for a total of about €300m.

Berlin, which has set up a €100bn fund to take stakes in companies struck by the coronavirus crisis, said it plans to sell the Lufthansa stake by the end of 2023.