Health Secretary Matt Hancock makes £100 bet with LBC presenter Nick Ferrari that the UK WILL meet its target of 100,000 coronavirus tests a day by the end of the month – despite not even being halfway there yet

Matt Hancock has agreed to £100 bet with LBC presenter Nick Ferrari that the UK will meet its target of 100,000 coronavirus tests a day by the end of the month – despite not even being halfway yet.

The charitable bet adds pressure onto the Health Secretary to fulfil the 100,000 tests per day he promised would be met by the ‘end of April’.

Public Health England carried out around 37,000 coronavirus tests on Sunday – meaning it has just three days to increase its capacity by 63,000 to reach its ambitious goal.

But Mr Hancock insists the task is ‘on track’ despite scepticism from the outset.

Downing Street has said it won’t become clear if the 10,000 target will be met until next week due to a lag in reporting – despite it consistently stating how many tests have been conducted in the past 24 hours since the outbreak began.

Home-testing kits for critical workers, which can be booked on an online portal, ran out this morning for the fifth day in a row in a criticised ‘first come, first served’ basis.

Some 10,000 tests were scooped up within hours after they were made available at 8am this morning.

Matt Hancock has agreed to £100 bet with LBC presenter Nick Ferrari that the UK will meet its target of 100,000 coronavirus tests a day by the end of the month – despite not even being halfway yet. Pictured, the line shows how many people have been tested per day in the UK

22,000 of the 26,000 available drive-through testing site appointments had been booked by key workers within an hour of availability this morning, No 10 said. Pictured, a drive-in testing facility being operated by the armed forces at the Chessington World of Adventures today

Asked if it was possible to meet the target of 100,000 daily tests by the end of April, Mr Hancock said it was a ‘big task’.

He told Mr Ferrari: ‘The plan was always to have a big ramp-up at the end of April because I spent April putting in place the systems to take this from an individual lab-by-lab process hand-done to an essentially automated process with an automatic application online.

‘Since that went live at the end of last week we have seen a very rapid rise.

‘We’re still on track but it’s a big big task. There’s a lot of things that we need to get right so there’s no guarantees in this life but we still are on track.’

Mr Hancock then agreed a £100 bet with Mr Ferrari, promising to give the money to Hospice UK if the target is met by May 1.

The 100,000 tests per days covers the Government’s five pillars of testing, which includes patients in hospital, NHS and key workers and their household members.

But official statistics show capacity hasn’t even reached half way, with 37,000 conducted on Sunday. Figures for Monday will be released imminently.

More than 10million key workers and their households are now eligible for Covid-19 tests as officials race to expand capacity.

But as of 11.50am today home testing kits for England were listed as ‘unavailable’ on the gov.uk/coronavirus website.

Some 10,000 kits were put onto the system – double that of previous days – which were all taken within hours.

More than 7,000 were ordered in the first hour of availability from 8am, Downing Street said, and 22,000 of the 26,000 available drive-through testing site appointments had also been booked.

Yesterday 5,000 home kits ran out 65 minutes after booking slots reopened, which was an improvement on the two minutes when the scheme launched on Friday.

Dr Chaand Nagpaul, chairman of the British Medical Association (BMA) council, said yesterday that the online booking system ‘offered no practical help’ to healthcare workers in a blow to the Government’s aim to improve accessibility.

He said the current testing capacity is ‘well, well short’ of the number of healthcare staff who are currently self-isolating.

‘Our estimate is that there are about 90,000 health and care staff self-isolating based upon the government figures of absence rates,’ he said.

‘If the government wants healthcare workers to have access to the test, it has to be in the context or providing adequate capacity, not a “first come first served” and closing within an hour.’

The Government hopes to have 96 mobile testing facilities by the start of May. 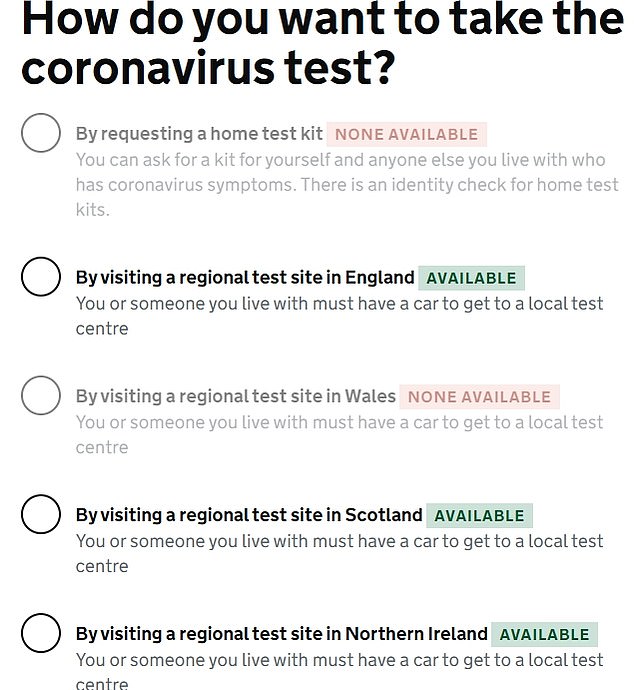 Home testing kits for NHS and critical workers have run out today after 10,000 were made available at 8am this morning. Test site appointments have run out in Wales 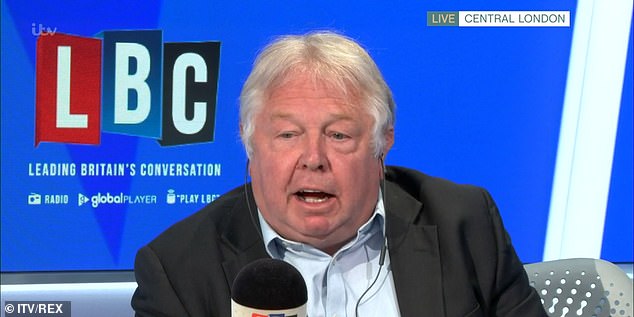 Mr Hancock agreed a £100 bet with LBC host Nick Ferrari (pictured), promising to give the money to Hospice UK if the target is met by May 1

But Mr Hancock insists the task for 100,000 tests a day is ‘on track’ despite scepticism from the outset. He is pictured on LBC

It will not become clear if the Government has reached it’s 100,000 per day target until next week, according to officials.

The Prime Minister’s spokesman said yesterday it will be ‘difficult to know’ if the coronavirus testing target had been on Friday due to a lag in getting results back.

‘For example, home testing kits can take up to 72 hours to get the results for, and therefore show up in the numbers’, the spokesperson said.

However, it is unclear why. Up until now, the daily test figure reported by the Department of Health and Social Care has been from 24 hours prior.

But the figure is thought to be more like 32,600 – 55 per cent higher than the daily Government statistics let on.

Weekly data released by the Office for National Statistics today showed that deaths outside of hospitals pushed England and Wales’s death toll to 22,351 for April 17, a significant rise on the 14,451 announced on that date by the Department of Health.

The latest figures from the National Records of Scotland, published last week, showed 1,616 deaths involving Covid-19 had been registered in Scotland up to April 19.

And the latest figures from the Northern Ireland Statistics and Research Agency, also published last week, showed 276 deaths involving Covid-19 had been registered in Northern Ireland up to April 22.

Updated figures from the National Records of Scotland are due to be published tomorrow, and from the Northern Ireland Statistics and Research Agency on Friday.