Five thousand lets in the county have claimed £10,000 each from the fund, which was set up to help minor firms survive the coronavirus lockdown.

The shocking revelations are understood to be reflected in other ‘second-home’ regions across the country.

The cash grants come from central government as a means to keep small companies afloat as many have ground to a halt during the pandemic.

Cornwall councillor Cornelius Olivier branded the holiday home owners ‘greedy’ and called for the government to close the loophole letting them mask as small firms.

The current rules mean holiday home owners also avoid paying council tax and business rates because they are below the income threshold for the latter. 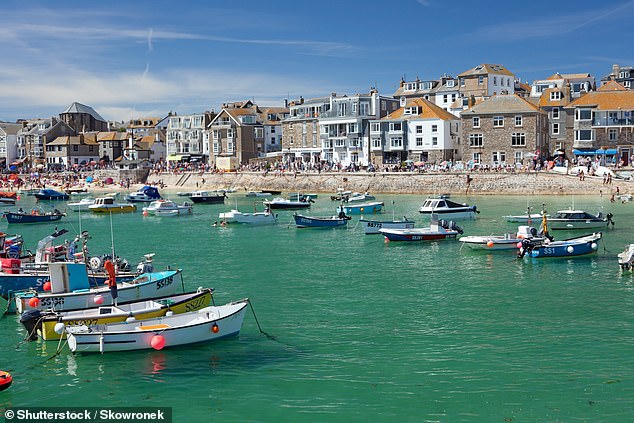 Five thousand lets in Cornwall (file photo of St Ives) have claimed £10,000 each from the fund, which was set up to help minor firms survive the coronavirus lockdown

Cllr Olivier, from Penzance, told Cornwall Live: ‘I am not surprised that these grants have been going to holiday lets as this is something I have been following for some time.

‘Ever since Cornwall Council chief executive Kate Kennally said what a great job we are doing in getting this money out – and the council has done a good job – I have wondered how much is going to people who own second homes registered as tax exempt businesses.

‘I finally got an answer yesterday evening – they said that there are 8,000 holiday lets eligible for business grants and 5,000 have applied so far. They would get £10,000 each.

‘So 27 per cent of the grants money for Cornwall has gone out to the owners of these properties.’ 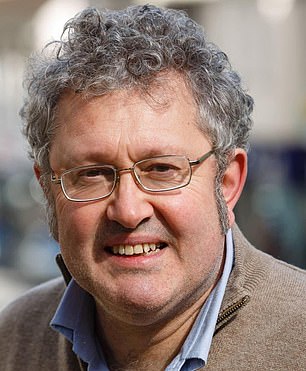 The owners of more than 55,000 holiday homes in England are estimated to be eligible for a £10,000 payout each from the emergency small business grants fund.

But local councillors believe thousands of those are simply second homes, used by the owners, their families and friends who do not pay rent.

Cllr Olivier was livid because he claimed these holiday home owners ‘don’t need the money’ and ‘shouldn’t get it’.

He continued: ‘There are lots of business that will struggle to survive even if they get this help.

‘Why are we giving this money to people who don’t need it? We should be making a stand.

‘It is quite clear that the business grants are for – to keep people afloat that wouldn’t otherwise survive.

‘For these holiday lets to get this money – you know I think they are taking the p*** by applying.’

Cornwall Council leader Julian German said they would like to replicate the system used by the Welsh Government.

There only holiday home owners who rely on their properties for the majority of their income would get the grants.

But he said this would have to be implemented by English policymakers before it could be used by local authorities.

Under the current format second home owners stand accused of ‘flipping’ their designation from residential to commercial to avoid paying property taxes.

These same businessmen are in line for the government grants, councillors complain.

In order to qualify for the government coronavirus support grant, properties must have a ratable value – the amount it could be rented for annually – of a maximum of £15,000 and be ‘available to rent’ for 140 days a year. 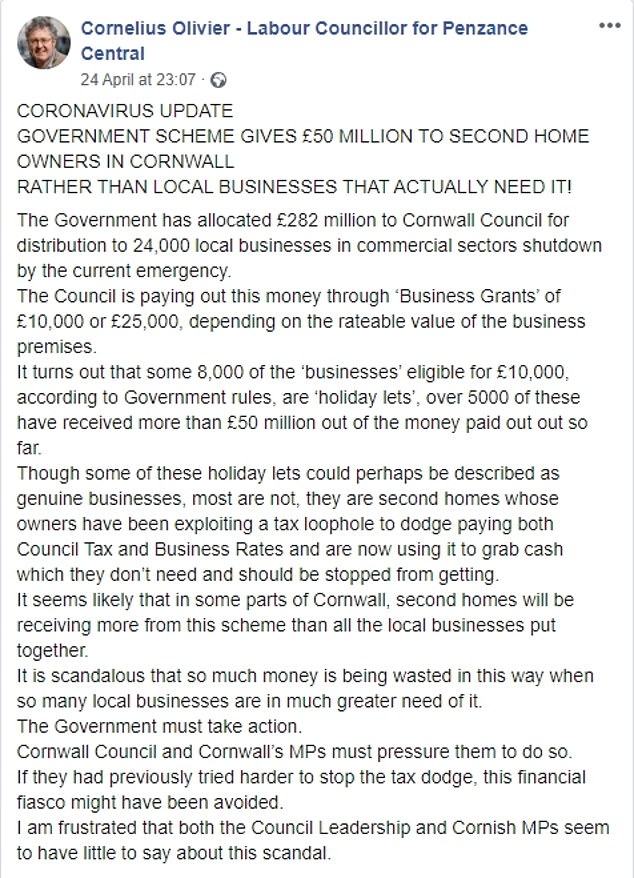 The government previously said it will prosecute anyone caught falsifying their records to gain additional grant money.

But officials say enforcing the rules is hard because second home owners are not required to show evidence of lettings to claim their property is for commercial use.

According to the estimates of one council on the south coast, around a fifth of local properties eligible for the grant are holiday homes in name only.

More than a third of the 55,000 properties eligible for the grant are in the south-west of England, including Cornwall and Devon.

Here local councillors have long complained second-home owners are losing them millions of pounds in council tax by designating their properties as businesses.

Judy Pearce, a councillor for Salcombe and Thurlestone in south Devon, said: ‘A lot of those houses are rarely let, and when they are it’s to family and friends for a few weeks.’

South Hams, including Salcombe, loses £2.5million in council tax receipts a year as a result of properties being designated as holiday homes, according to Anthony Mangnall, Conservative MP for Totnes.

He said: ‘Fishermen are offered little support other than from universal credit, but are seeing Londoners with second homes being able to apply for £10,000. It’s a tough pill to swallow.’

The exemption of second homes from council tax is a ‘peculiarity’ when they still use the same council services as other properties, such as rubbish collection and street lighting, added Cornwall councillor Carol Mould.

Chancellor Rishi Sunak has sought to close what he called the ‘business rates loophole’.

He launched a consultation to look into the issue when he was local government minister in November 2018.

He said there were ‘concerns the current arrangements… do not provide strong enough protections against abuse’.

But the consultation has yet to conclude and homeowners who are abusing the system are free to claim the government’s coronavirus grants.