Her Majesty’s last night at Buckingham Palace: How King Charles will privately mourn his mother in the Bow Room where she recorded her first Christmas broadcast in colour in 1967 before her coffin is moved to the Throne Room where staff pay respects

King Charles is set to privately mourn his mother in Buckingham Palace’s Bow Room later today, before her coffin is moved to the Throne Room so her devoted staff can also pay their respects.

Her Majesty is currently lying at rest in St Giles’ Cathedral, with thousands of mourners having queued overnight to pay their respects. She is set to leave the church at 5pm and will be taken by RAF plane to London at 6pm.

From RAF Northolt, she will be driven by state hearse to Buckingham Palace, where her casket will first be carried by members of the Queen’s Company, 1st Battalion Grenadier Guards, to the Bow Room.

There, the coffin will be placed on trestles as King Charles III watches with the Queen Consort. His Majesty and other royals will then be able to mourn as Chaplains to the King – who were appointed by the Queen – keep watch over the coffin.

The Bow Room gets its name from its large window and is well-known for being where palace guests make their entrance onto the terrace for garden parties, via a set of double doors.

Situated in the West Wing of the marble hall, it is also where the Queen traditionally hosted an arrival lunch for visiting heads of state. Her Majesty recorded her first ever colour television Christmas broadcast in there in 1967.

Her Majesty will then be moved to the Throne Room so her staff can say a final goodbye. The red-and-gold Throne Room is dominated by its two gilded ‘chairs of state’. The Queen used it to entertain heads of state and for other special occasions.

The Queen’s coffin will return to the Bow Room and rest overnight before it is taken by gun carriage to the Palace of Westminster at 2.22pm tomorrow.

The King and other senior royals and staff will then follow the carriage as it makes it way to Westminster Hall to lie in state for four days. The queue for ordinary Britons is expected to be up to five miles long and it could involve a wait of 30 hours. 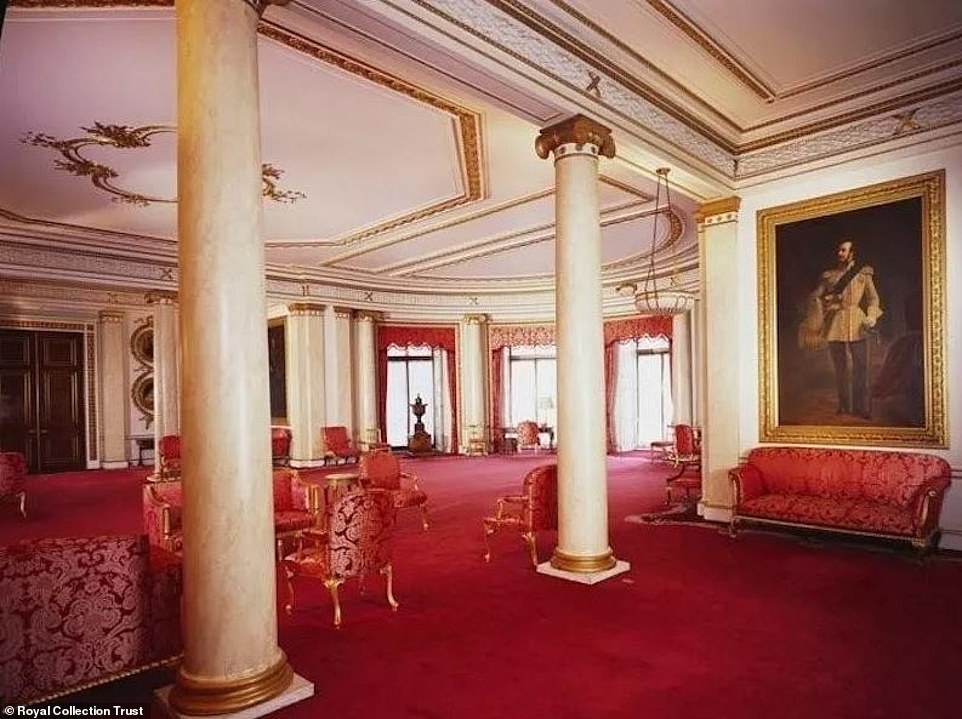 King Charles is set to privately mourn his mother in Buckingham Palace’s Bow Room later today, before her coffin is moved to the Throne Room so her devoted staff can also pay their respects 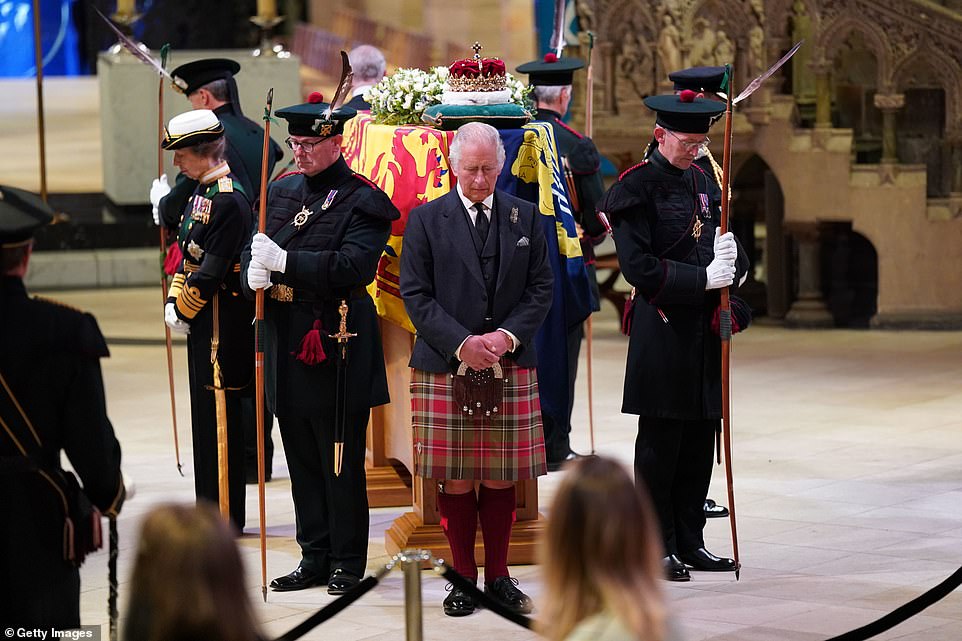 Her Majesty is currently lying at rest in St Giles’ Cathedral, with thousands of mourners having queued overnight to pay their respects. She is set to leave the church at 5pm and will be taken by RAF plane to London at 6pm. Above: Charles, his sister the Princess Royal and brothers the Duke of York and the Earl of Wessex kept a vigil by their mother’s coffin from 7.46pm until 7.56pm last night 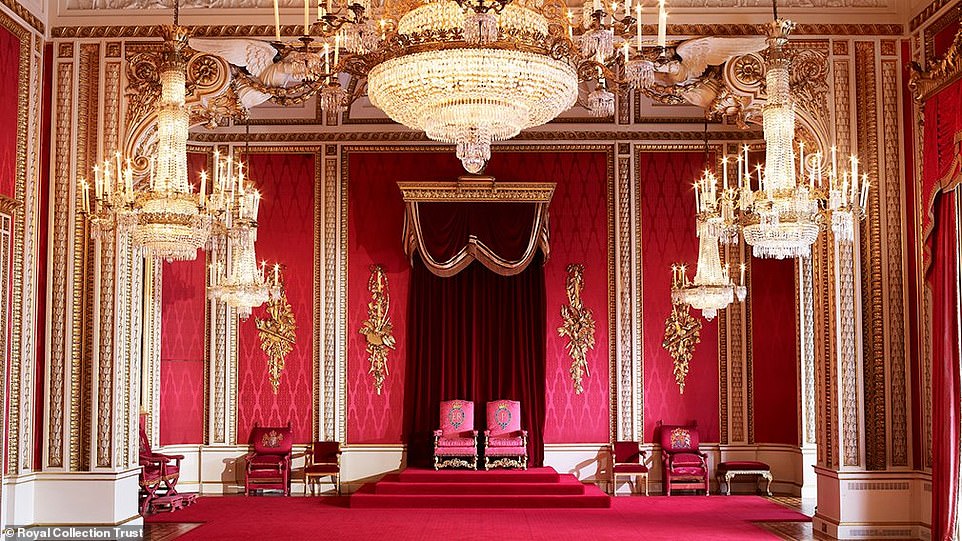 After lying in the Bow Room, Her Majesty will be moved to the Throne Room so her staff to say a final goodbye. The red-and-gold Throne Room is dominated by its two gilded ‘chairs of state’. The Queen used it to entertain heads of state and for other special occasions

During the night and after dawn today, mourners from across Scotland and as far south as London stood in a mile-long queue to say a tearful goodbye to the Queen.

At 7am numbers had dwindled overnight so members of the public were able to walk to the cathedral doors almost uninterrupted.

But by 9am a steady flow footfall had grown but mourners had to wait no more than an hour.

Last night, King Charles III, his sister the Princess Royal and brothers the Duke of York and the Earl of Wessex all arrived at St Giles’ Cathedral after the sun had set over the Scottish capital, then kept a vigil by their mother’s coffin from 7.46pm until 7.56pm while members of the public walked past silently.

The most striking part of the Throne Room is the fact that there is no throne. Instead, the two gilded chairs are in its place. They are marked ‘His’ and ‘Hers’ and date from the Queen’s Coronation in 1953.

The ceiling is covered in coats of arms that represent England, Scotland, Ireland and Hanover. It was sometimes used during Queen Victoria’s reign for Court gatherings and as a second dancing room.

The chairs are part of a set that also includes a pair of mahogany sofas and a pair of long settees, all upholstered in the same fabric.

The room also hosts a display of a dinner and dessert service that belonged to George III and his wife Queen Charlotte, now known to a generation of viewers as the monarch on Bridgerton.

The set, known as the Mecklenberg Service, was presented to her brother, Adolphus Frederick IV, Duke of Mecklenberg-Strelitz in 1764 and remained in his family until 1919.

It was returned to the Royal Family in 1947 to mark King George VI and Queen Elizabeth’s silver wedding anniversary.

The service includes a pair of soft-paste bone-ash porcelain oval platters featuring a scalloped gilt rim and painted at the centre with exotic birds in landscape vignettes. There are also plates, sauce boats and a candelabra.

Among the portraits on the walls is an 1853 painting of Frederick William, Grand Duke of Mecklenburg-Strelitz, the great-nephew of Queen Charlotte and a close friend of Prince Albert.

The portrait was commissioned by his wife Queen Victoria.

This morning, final preparations for events in London following the Queen’s death were underway, with a full rehearsal for the procession of the her coffin to Westminster Hall taking place in central London.

Thousands of soldiers in ceremonial uniform gathered at Buckingham Palace in the early hours of Tuesday for the practice run.

The early-morning rehearsal saw the horse-drawn carriage of the King’s Troop Royal Horse Artillery being led along the route.

A black coffin was placed on the gun carriage and, at around 4am, the procession was ordered to march and the carriage, pulled by seven black horses, made its way via Queen’s Gardens, The Mall, Whitehall, Parliament Street, Parliament Square and New Palace Yard.

Many of central London’s streets were sealed off for the massive operation. The real procession begins at 2.22pm on Wednesday, and it will last 38 minutes. 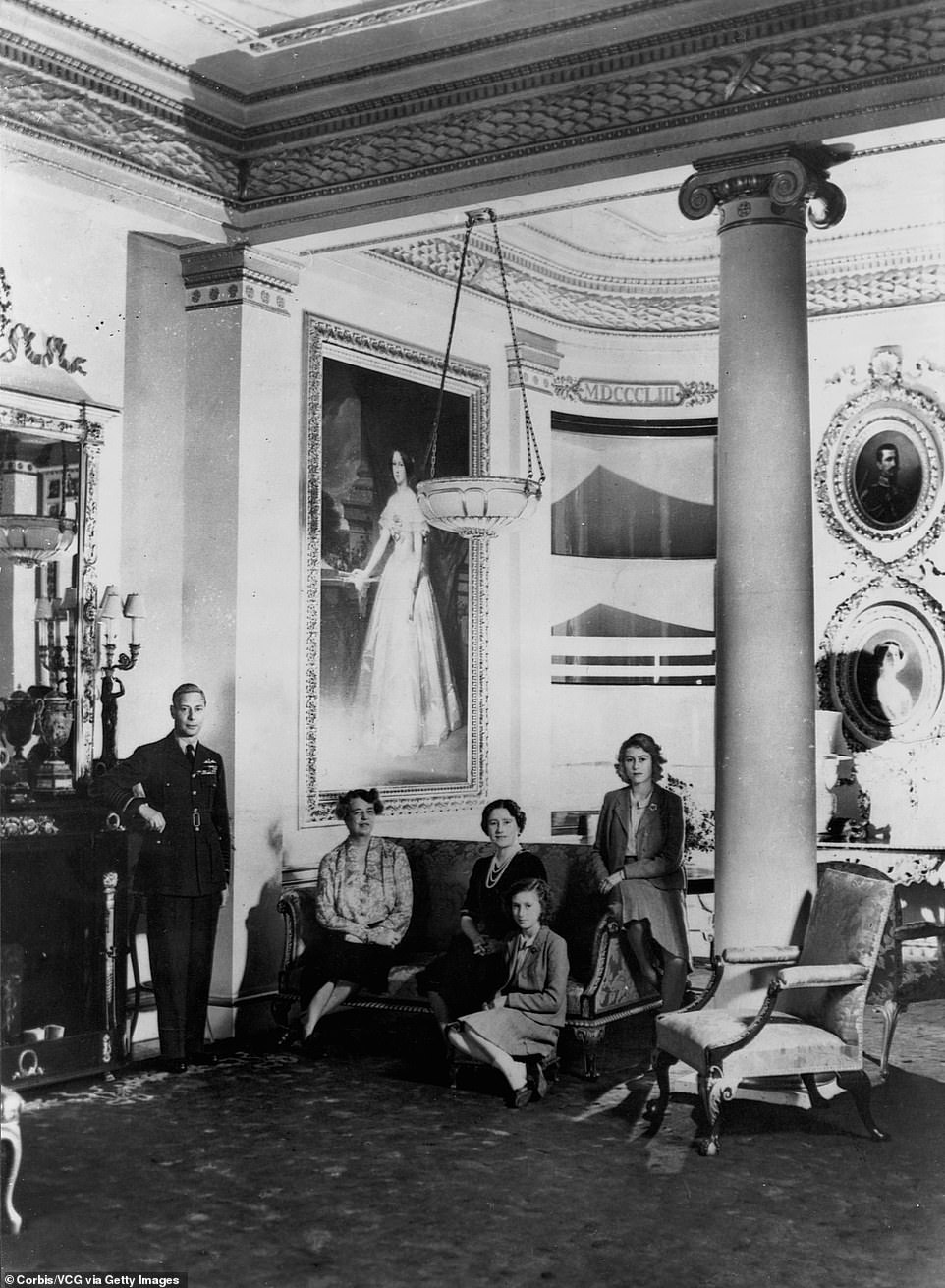 Eleanor Roosevelt, the wife of the then US President Franklin D Roosevelt, is seen in the Bow Room with King George VI, his wife Queen Elizabeth and the then Princess Elizabeth (standing) and her sister Princess Margaret in 1941 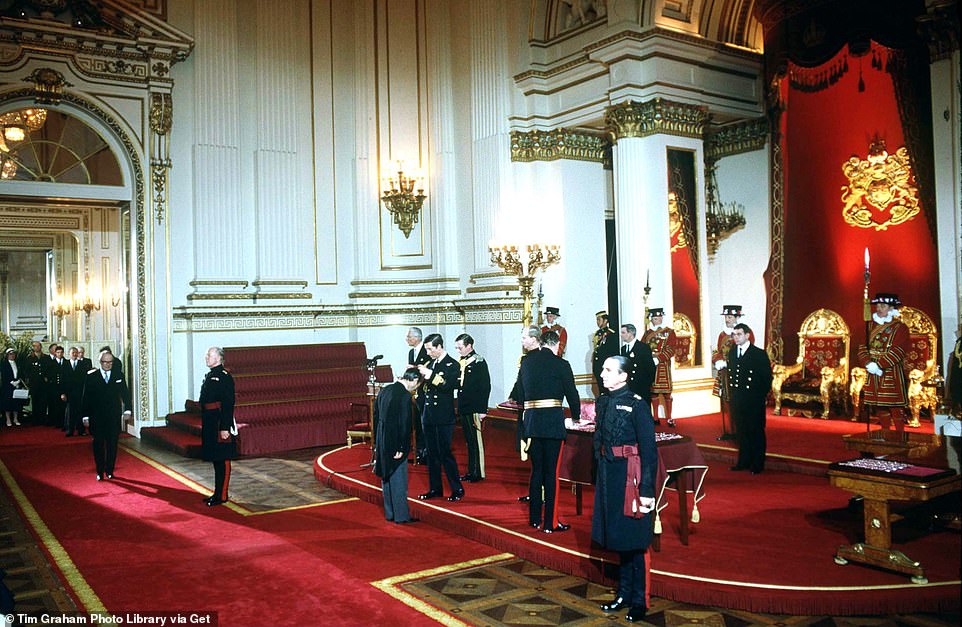 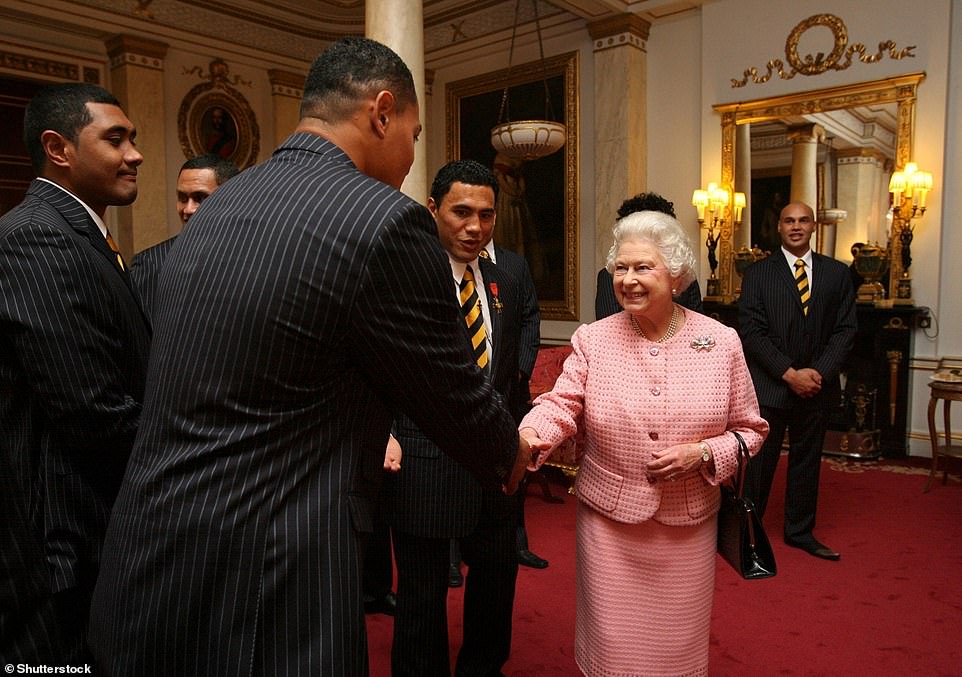 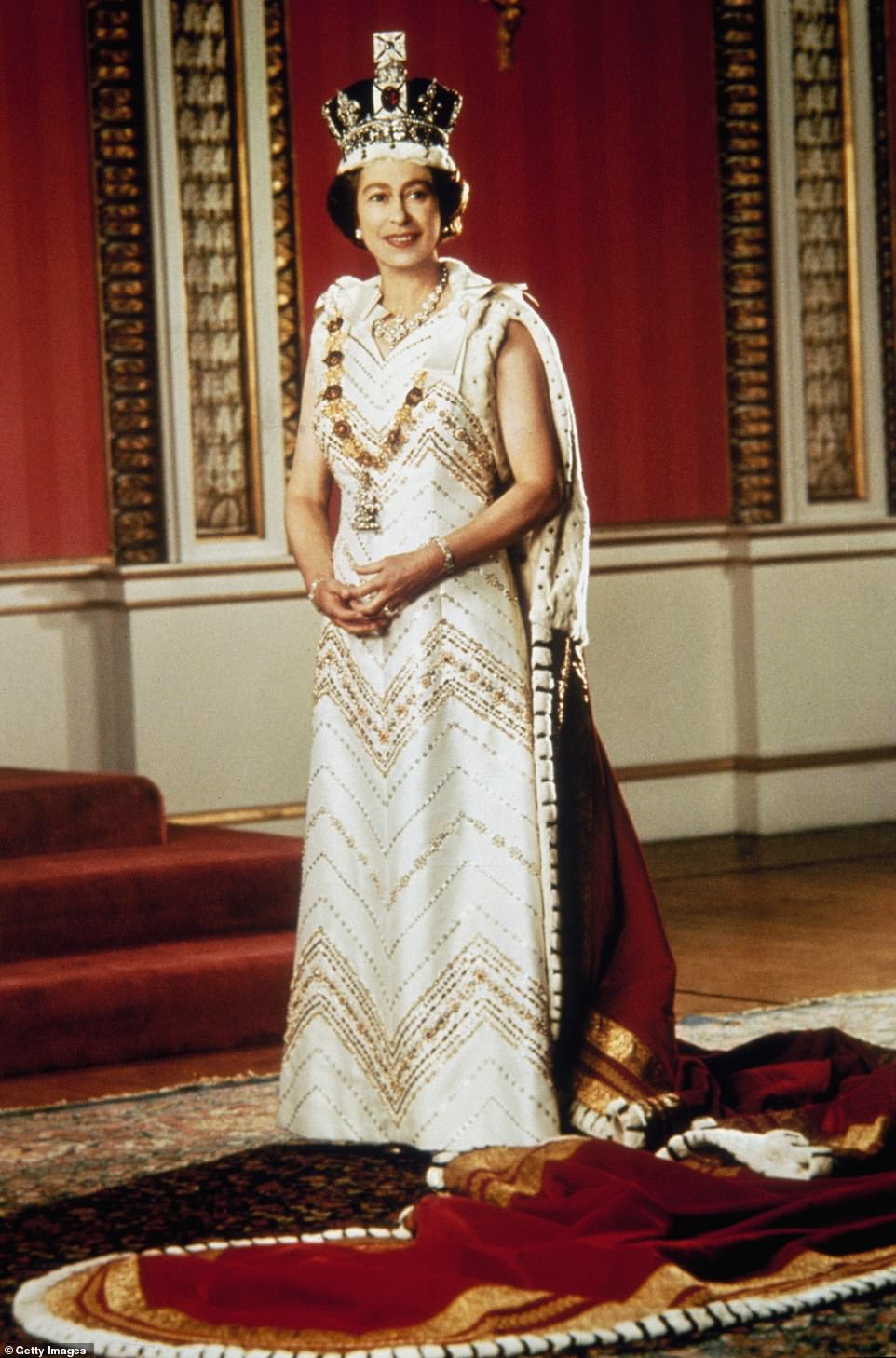 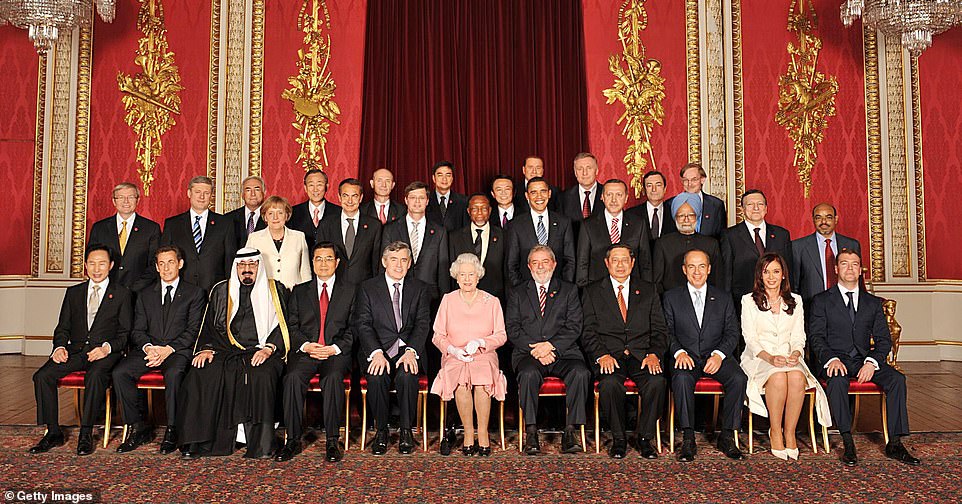 Queen Elizabeth II poses with delegates of the G20 London summit for a group photograph in the Throne Room at Buckingham Palace on April 1, 2009

The rehearsal, which took place before the sun came up, saw people standing in for them.

Given the time, only a few onlookers were present for the military spectacular, with some finding themselves there by chance.

However, one small group were camping outside Buckingham Palace.

John Lowell, from Streatham, south London, said he was ‘devastated’ by the news of the Queen’s death, adding: ‘We are all broken-hearted. I can’t take it in.’

His friend, Sky London, told the PA news agency they have been camping since Thursday ‘so we can get a good view of things’ and insisted they will not leave until after the funeral, so that they can pay their ‘respects’.

He added: ‘Ten days (of camping) against a 70-year reign is only a fraction.’

People have been warned not to wait or camp along the route where the Queen’s coffin will be taken for the lying in state.

Viewing areas along the route with limited capacity will open at 11am on the day, with people admitted in order of arrival time amid expected long queues, the Department for Digital, Culture, Media and Sport (DCMS) said.

The Queen’s coffin will remain in Westminster Hall until Monday, when it will be taken in procession from the Palace of Westminster to Westminster Abbey for the state funeral service.