Tel Aviv Israel’s president has named Prime Minister Benjamin Netanyahu as the party leader to try to cobble together a governing majority.

Reuven Rivlin’s announcement in Jerusalem on Tuesday nudged forward the twin dramas over the country’s future and Netanyahu’s fate as his corruption trial resumed across town. 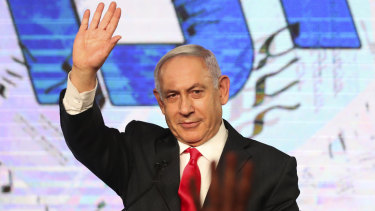 Israeli Prime Minister Benjamin Netanyahu has been asked to form a government.Credit:AP

The charges facing Israel’s longest-serving premier posed an extraordinary choice for the country’s president over whether “morality” should be a factor in who should lead the government.

The March 23 election revolved around whether Netanyahu was fit to continue serving. His Likud party won the most seats, but no party won a governing majority of 61 seats in the Knesset. That handed to Rivlin the task of deciding who had the best chance of cobbling together a coalition.

Netanyahu denies all charges and says prosecutors are trying to undermine the voters intent and oust him from office.

The extraordinary decision before Rivlin came as Netanyahu’s trial reopened on a day that might shed light on who, if anyone, can lead the splintered government after its fourth election in two years.

The March 23 vote no governing majority in the 120-seat Knesset, leaving it to Rivlin to pick a party leader most likely to form a coalition. The parliament was to be sworn in later on Tuesday.

Netanyahu was not expected to appear in court Tuesday, but his increasingly fraught future ran through both arenas.

In court, where he faces fraud, breach of trust and bribery charges in three separate cases, the outlook was not flattering. A key witness on Monday cast Netanyahu as an image-obsessed leader who forced a prominent news site to help his family and smear his opponents.