Is this Joe’s ‘Deplorables’ moment? Biden says 10 to 15 percent of Americans ‘are not good people’ during discussion on race with Don Cheadle – sparking memories of Hillary Clinton’s costly 2016 election gaffe

Vice President Joe Biden said in a discussion of the George Floyd killing that a large substantial share of Americans are not ‘very good people’ – as he tried to condemn President Trump but potentially opened himself up to attack.

‘There are probably anywhere from 10 to 15 percent of the people out there that are just not very good people,’ Biden said in an online discussion with actor Don Cheadle Thursday.

Amid deep divides over police conduct toward African Americans and Trump’s decision to proclaim ‘law and order’ while brandishing the U.S. military in a crackdown, Biden condemned the president’s words and tone. 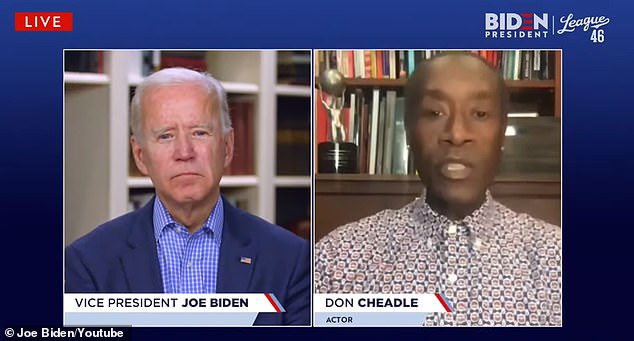 ‘The words a president says matter. So when a president stands up and divides people all the time, you’re going to get the worst of us to come out. The worst insult to com out.’ Biden said.

But he also extended his critique far beyond a small slice of the country. ‘Do we really think this is as good as we can be as a nation? I don’t think the vast majority of people think that,’ he continued.

‘There are probably anywhere from 10 to 15 per cent of the people out there that are just not very good people. But that’s not who we are. The vast majority of the people are decent, and we have to appeal to that and we have to unite people — bring them together,’ Trump said.

His remarks recalled a gaffe by Hillary Clinton during the 2016 elections, where she said half of Trump’s supporters could be put in a ‘basket of deplorables.’ It was a comment that the Trump campaign was able to weaponize as the candidates were battling it out in critical swing states, and that Clinton had to walk back.

She had said half of then-candidate Trump’s supporters were ‘racist, sexist, homophobic, xenophobic, Islamaphobic.’ She later condemned her ‘generalistic’ statement as well as her math.

“Last night I was ‘grossly generalistic,’ and that’s never a good idea. I regret saying ‘half’ — that was wrong,” she said in September.

Clinton had made the remark days earlier at a campaign gala in New York City. Trump immediately made hay out of it, tweeting: ‘Wow, Hillary Clinton was SO INSULTING to my supporters, millions of amazing, hard working people. I think it will cost her at the Polls!’

Trump supporters soon embraced the term, and some started up showing up campaign rallies with ‘deplorables’ signs.