This time last year, Melbourne was turning a corner. Statewide cases were down from an early August peak of more than 700 a day to the low 200s, on our way to what we called – in our new COVID-19 language – “double-doughnut” days. When such days came, there was relief, self-congratulation and an unspoken expectation that together we had seen off the worst.

How can it be that we find ourselves back at a point where Chief Health Officer Brett Sutton describes us as “right on the cliff edge” of another explosion of cases? The federal government’s slow vaccine rollout is one obvious problem, but as we know from experiences abroad, the coronavirus has its own awful rhythm, cruelling our hopes of a return to cultural, sporting and social life. 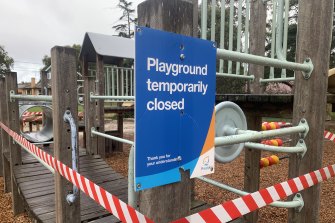 To the state opposition, it is the Andrews government’s new lockdown restrictions on playground use and its curfews that are cruel. Opposition Leader Michael O’Brien and some experts have argued, last year and now, that there is a lack of evidence that curfews curb transmission, and The Age has previously questioned such a harsh measure, one that other states have not deemed necessary. Other experts, as well as Professor Sutton, argue that a curfew forms part of a suite of measures and so assessing its contribution to our overall progress in fighting infections is fraught.

We remain sceptical of such a draconian measure when evidence is so scant. Speaking to The Age, epidemiologists Catherine Bennett of Deakin University and Nancy Baxter of the University of Melbourne’s School of Population and Global Health both saw the curfew’s importance in terms of messaging rather than medical effects. “Clearly people are too relaxed right now,” Professor Bennett said. “This is about what the government thinks is necessary to drive that message home to people that the harder we do it, the shorter the lockdown.”

Many Melburnians would say some people’s behaviour is less about being relaxed than it is about fatigue and a law of diminishing returns from lockdown shock tactics. There is more resistance and resentment and the curfew pushback is as much symbolic as substantive.

What must also be said is that while the restrictions are identical to those of a year ago, the virus itself has changed. It is clear the Delta variant has made the end of our recurring lockdown nightmare harder to see. It has also forced a rethink of what we knew about transmission and its consequences, including transmission by children. Any government faced with this altered landscape would seek a return to the most effective approach it could recall.

As another epidemiologist, Mike Toole of the Burnet Institute, told this masthead, “we know that [last year’s hard lockdown] worked”. Overall, as horrid as they are, The Age supports the tightening of restrictions as a short, sharp measure to get this outbreak under control. The alternative is the ongoing crisis in NSW, where measures were too slow and too loose for many weeks.

Two things are now crucial. Mr O’Brien talked about the government not having “a plan to tackle the guilty” in the current outbreak. Professor Sutton also noted that “there have been people bending the rules – that puts us all at risk”. Enforcement of the rules by the authorities is of course vital. But we didn’t beat the virus last year through punishments and blaming; we beat it through collective effort. At this stage it is also vital for leaders to set out how the future looks and how we aim to get there, and build support for that.

At the same time, we need to roll up our sleeves again. In an encouraging moment of bipartisanship, federal Labor MP for Macnamara Josh Burns and state Liberal MP for Caulfield David Southwick issued a joint statement after the now-notorious Caulfield North engagement party. As they wrote: “Every Melburnian is exhausted and desperate for this lockdown to end. But the quickest way to end this lockdown is for people to do the right thing – follow the rules; get tested and isolate if they’re symptomatic or have been at an exposure site; and get vaccinated if they’re eligible.”

It sounds simple. It has been hard. But the alternatives are harder still. Let’s turn the corner again.

Gay Alcorn sends an exclusive newsletter to subscribers each week. Sign up to receive her Note from the Editor.