Japanese knotweed has taken over a park in Worcester and is creeping towards homes like a scene from horror movie ‘The Day of the Triffids’, angry residents claim.

Locals fear the fast-growing plant which has taken root in Brickfields Park, part of King George V Playing Fields, will decrease the value of their properties, and say the council has repeatedly ignored their pleas for help.

They say the eyesore weed, which has grown to six feet in the park, is invading their homes and needs to be tackled. 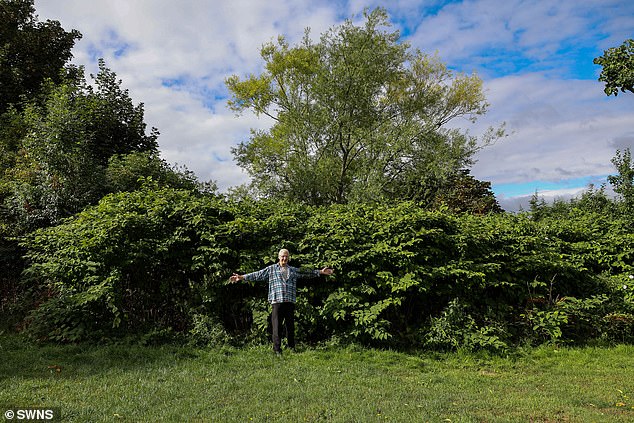 Retired gardner, Dennis Hodson lives in a £200,000 bungalow in Tunnel Hill, which backs onto the fields which have been overtaken by Japanese Knotweed 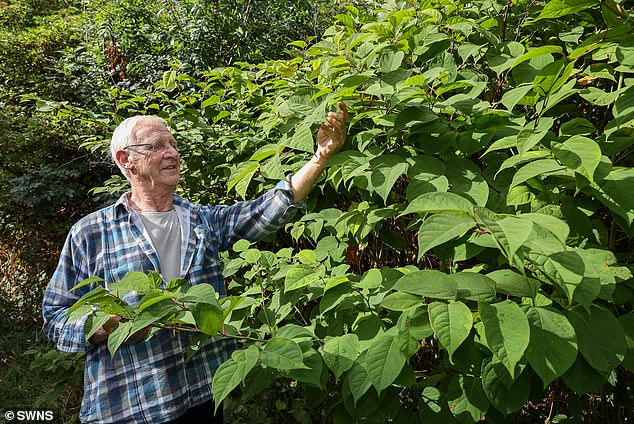 Mr Hodson said he has told council workers about the problem, but nothing has been done to tackle it 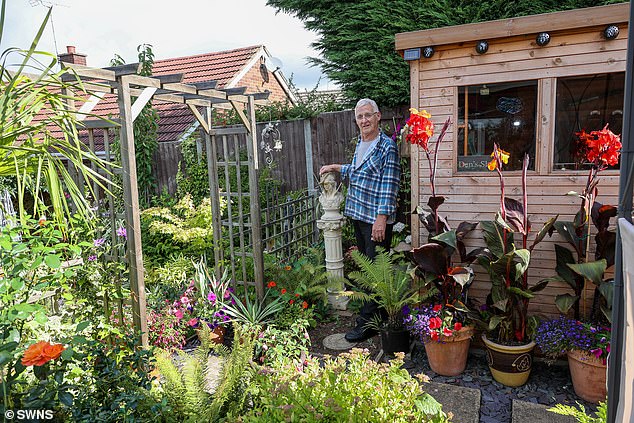 Residents fear that the encroaching weed which has taken root in Brickfields Park will lower the value of their properties. Pictured: Dennis Hodson in his garden

Retired gardener Dennis Hodson lives in a £200,000 bungalow in Tunnel Hill, which backs onto the fields.

The 73-year-old said he has told council workers about the problem, but nothing has been done to tackle it.

‘The knotweed has gone rampant in the park and it’s coming up in our gardens now, including mine which is just 20 metres away,’ he said. ‘It’s a bit of a nightmare.

‘It’s getting to about six foot tall in the park and I’ve tried calling the council, but they haven’t done anything.

‘The plant is just about to seed which will spread it even further. The time to act is now.

‘I also spoke to groundsmen in the park and they told me it wasn’t anything to do with them. Two or three years ago they used to cut it back, which is never going to get rid of it, but now they’re not even doing that.

‘I managed to remove it from my borders a few years ago using a strong weed killer but it just comes back.’ 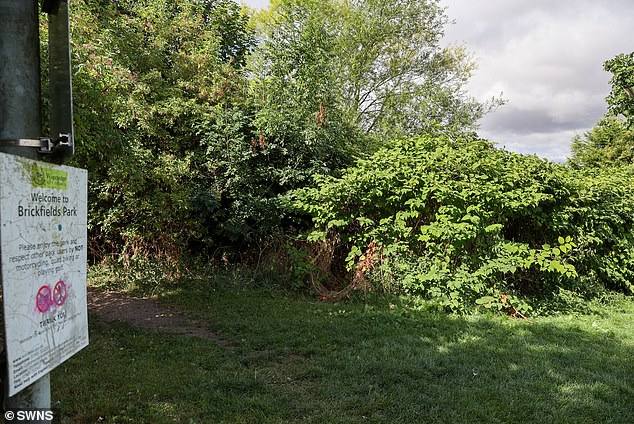 The invasive weed has grown to six feet in Brickfields Park, which is part of King George V Playing Fields 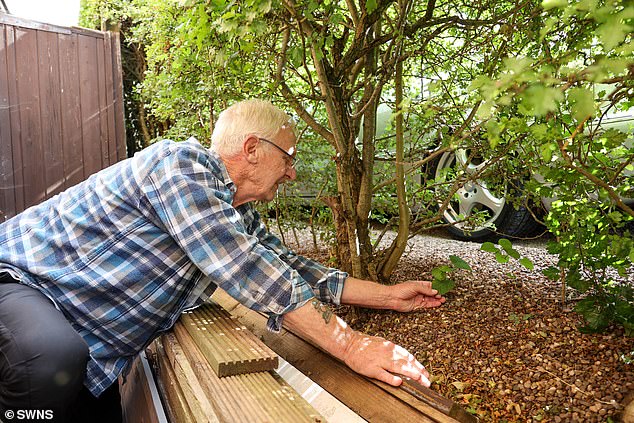 Retired gardener Mr Hodson says the weed is starting to come up in his garden, which is 20 metres away from the park 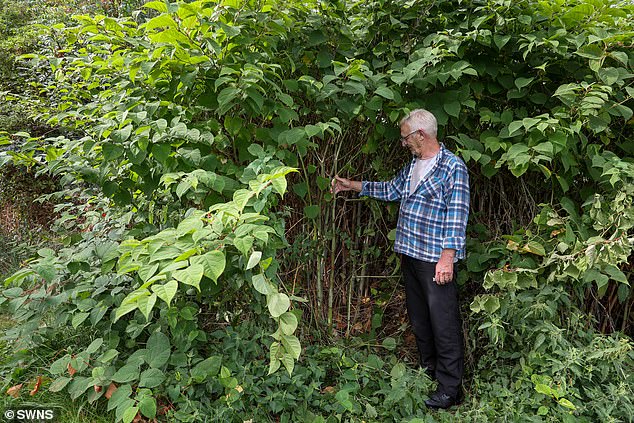 Japanese knotweed is one of the most common invasive plants in the UK. Mr Hodson said the plant is about to seed and that action needs to be taken now 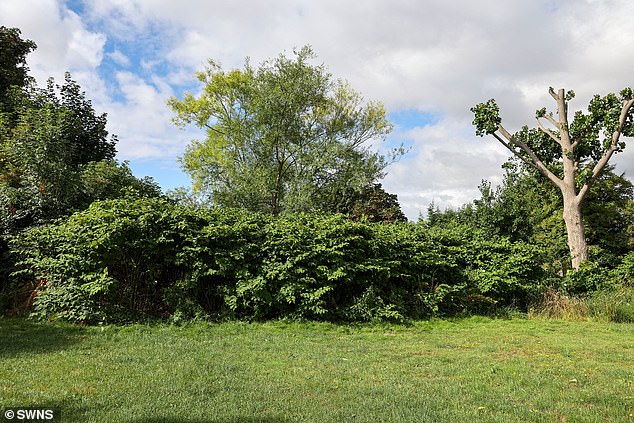 Another resident described the ongoing issue as ‘a scene from The Day of the Triffids.’

WHAT IS JAPANESE KNOTWEED? THE NOTORIOUS PLANT THAT CAN DESTROY BUILDINGS

Japanese Knotweed is a species of plant that has bamboo-like stems and small white flowers.

Native to Japan, the plant is considered an invasive species.

The plant, scientific name Fallopia japonica, was brought to Britain by the Victorians as an ornamental garden plant and to line railway tracks to stabilise the soil.

It has no natural enemies in the UK, whereas in Asia it is controlled by fungus and insects.

In the US it is scheduled as an invasive weed in 12 states, and can be found in a further 29.

It is incredibly durable and fast-growing, and can seriously damage buildings and construction sites if left unchecked.

The notorious plant strangles other plants and can kill entire gardens.

Capable of growing eight inches in one day it deprives other plants of their key nutrients and water.

Another resident described the ongoing issue as ‘a scene from The Day of the Triffids.’

‘The knotweed just keeps getting closer and closer to our homes,’ they said.

‘It’s like a scene from The Day of the Triffids and the mixture of the very hot weather and then heavy rain has just made it grow out of control.

‘The council do nothing to help and we all worry about the impact it’s having on the value of our homes.

‘I certainly wouldn’t want to buy a house which is at risk of being taken over by this thing.’

Japanese knotweed is one of the most common invasive plants in the UK.

The plant, which was introduced to the UK from Japan in 1825, can grow up to 10cm a day and cause damage to buildings and infrastructure if it is not trimmed back and left unchecked.

Once established, the weed can be extremely difficult to get rid of, so much so that experts treat the cuttings as licensed hazardous waste.

Having the weed on a property can make it notoriously difficult for homeowners to secure a mortgage or sell the property on.

A spokesperson for Worcester City Council said specially-trained staff will be attending the playing fields in the coming days to attempt to tackle the problem.

‘We are aware of the Japanese knotweed growing at King George V Playing Fields and our specially-trained staff will stem-inject the plants in the coming days,’ they said.

‘It will take a few weeks to die off and we will do a follow-up treatment in a month and another next year to ensure it is dealt with.

‘If this Japanese knotweed has spread to properties from the playing fields, then residents can get in touch with us and we can treat it accordingly.’