Lorry driver who killed boy, 14, and teaching assistant, 50, when he ploughed into school minibus while checking Facebook on his phone is jailed for almost nine years 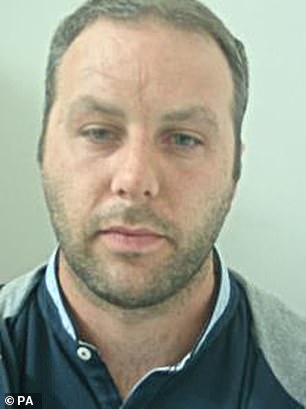 James Majury, 33, (pictured) was today jailed for eight years and 10 months after killing two people in a multi-vehicle collision on the M58 in Lancashire in January 2019 while checking his Facebook

An HGV driver who killed a boy, 14, and a teaching assistant, 50, after ploughing into a minibus while checking Facebook has been jailed for almost nine years.

James Majury, 33, was travelling 56mph along the M58 motorway in Lancashire on January 8, 2019, when his Mercedes Arocs, carrying scaffolding, ploughed into the back of a nine-seater minibus.

The HGV driver only noticed how close the minibus was in front of his 19 ton lorry half a second before impact when he slammed on his brakes, Preston Crown Court heard. 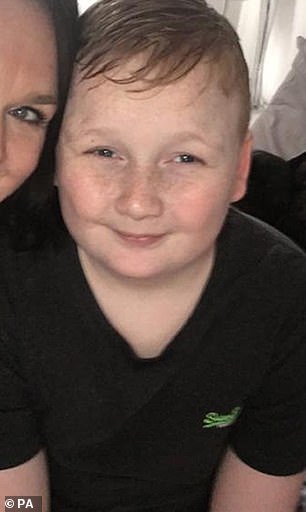 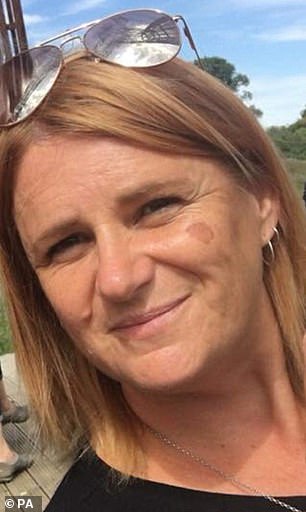 Joe Cairns, 14, from Radcliffe, Greater Manchester, and school support worker Anne Kerr, 50, from Southport, died from their injuries at the crash site in Bickerstaffe, Lancashire.

Five other people, including minibus driver John Hatton, were seriously injured in the multi-vehicle collision caused by the lorry which was described as a ‘19.2 ton battering ram’.

Sentencing Majury today, Judge Robert Altham said: ‘The sad conclusion was this. The defendant did not see the obvious minibus and of course its precious occupants because he prioritised checking his Facebook over the safety of anyone else on the road that day.

‘The force of the impact was so great the rear portion of the minibus was completely crushed. 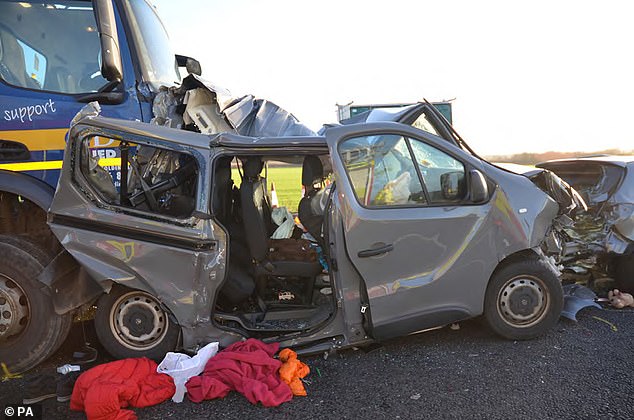 ‘In a split second, those two lives were lost. These were precious individuals indeed. Their lives and the lives of those close to them have been laid waste by this defendant.’

Judge Altham also said that he had heard moving testimony from those who were seriously injured by the defendant’s ‘lack of attention’.

Majury was jailed for eight years and 10 months for death by dangerous driving offences and two years and eight months for offences relating to causing serious injury and both sentences will run concurrently.

Before the crash at 8.42am warning signs had been made visible indicating a lane closure on the approaching exit slip road where a queue of traffic had been building. 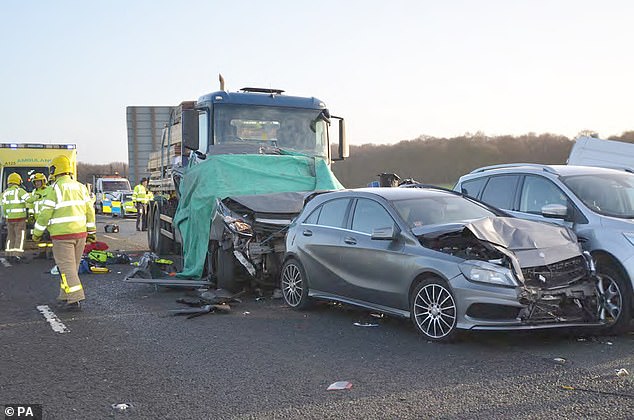 Five other people, including minibus driver John Hatton, were seriously injured in the multi-vehicle collision caused by the lorry which was described as a ‘19.2 ton battering ram’

Judge Altham said: ‘It would seem the phone was in his hand so he could use Facebook when 50 seconds later he struck the minibus.’

He also added: ‘The defendant’s lack of attention was so great he only began braking 12 metres before he hit the minibus – wholly inadequate to effect any serious reduction in his speed.’

James Ageros QC, defending Majury, said: ‘He wishes to apologise wholeheartedly and unreservedly to all of the families so desperately affected by his appalling actions that day.

‘The effect of what he did – for what it’s worth – stays with him every day.’

Dashcam footage shown in court from a Ford Transit, two vehicles in front of Majury’s HGV, showed how the impact from the collision forced the vehicle onto the roadside embankment. 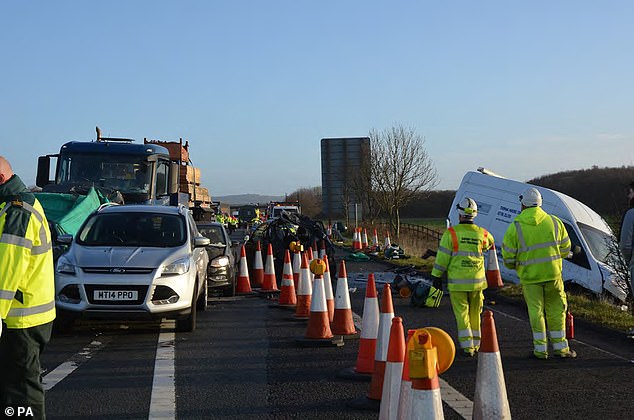 Dashcam footage shown in court from a Ford Transit (right), two vehicles in front of Majury’s HGV, showed how the impact from the collision forced the vehicle onto the roadside embankment

Majury, a father-of-one, suffered a spine fracture in the crash and the court was told that he continues to deal with depression and post-traumatic stress disorder because of his actions.

In a statement read to the court, Mrs Kerr’s husband, Simon, said: ‘There are no winners for anybody involved in this. I hope that people will remember this and think about the devastation that has been caused before picking up their phone whilst driving.’

Joe’s mother, Steph Cairns, said in a statement: ‘Joe really liked going to school with Anne. Every day he liked to take with him a pug teddy, and his big red blanket and sit on the back seat. I always used to stand and wave him off and tell him I loved him.

‘I miss my little boy every minute of every day. I feel useless now he’s not here anymore because he was my world. I always thought he needed me because of his special needs but it turned out I needed him way more.

‘It’s ripped me apart and the only thing that keeps me going are my three other beautiful children. I cry every day thinking about Joe. 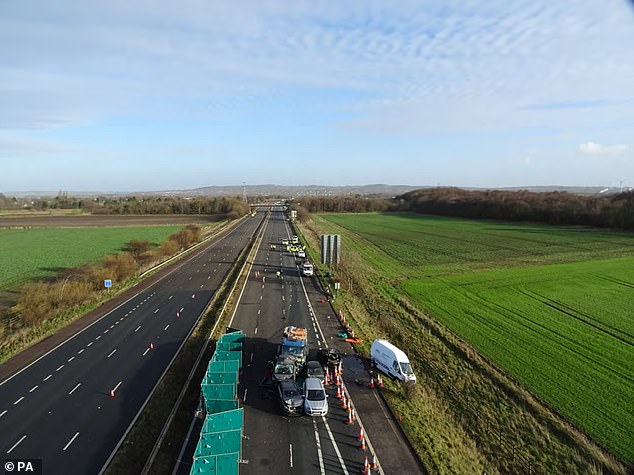 In a statement read to the court, Mrs Kerr’s husband, Simon, said: ‘There are no winners for anybody involved in this.’ Pictured: an aerial view of the crash caused by James Majury

‘He’s constantly on my mind, I miss his humour and his company. I think about him laughing because it was so infectious and made me smile, he made everybody smile. He was our hero.’

She also described Majury’s actions as ‘selfish and utterly mindless’.

Joe’s father, Andrew, told the court: ‘They say ‘death by dangerous’ but I say ‘no’ – it’s murder in my eyes.’

Inspector Claire Pearson, from Lancashire Road Policing Unit, said: ‘Joe and Anne’s families can’t bring their loved ones back but what they have asked is that people listen to what has happened here and learn that it is never safe to use a phone whilst you’re driving.’

Majury will be banned from driving for six years when he is released on licence halfway through his sentence. 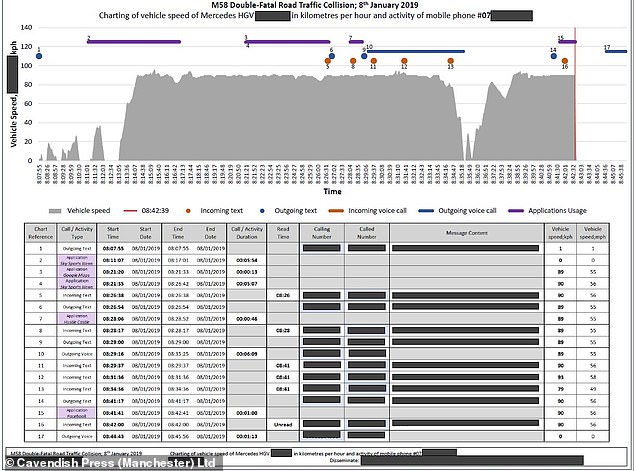