The Columbus Police Department released two 911 calls and additional bodycam footage that shed light on what led up to the fatal shooting of a teenage girl who was attacking people with a knife.

The argument that preceded the fatal police shooting of 16-year-old Ma’Khia Bryant in Columbus, Ohio, earlier this week began over a messy house and unmade bed, her foster mother has revealed.

Angela Moore said Thursday the dispute occurred when two of her former foster children were at her home in east Columbus to celebrate her birthday on Tuesday.

“It was over keeping the house clean,” Moore told CNN. “The older one told them to clean up the house because ‘Mom doesn’t like the house dirty.'”

“So that’s how it all started,” she added. 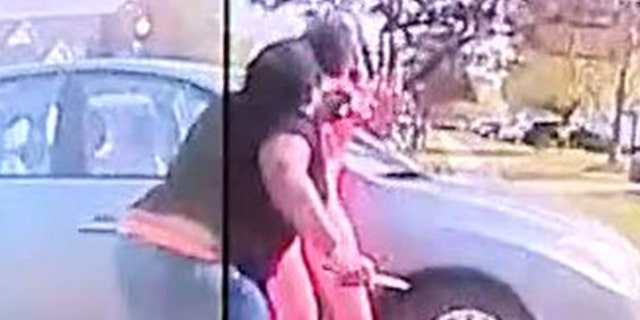 Body camera footage shows a young girl attacking multiple people with what appeared to be a knife in Columbus, at which point a police officer fatally shot her.
(Columbus Police Department)

OTHERS INVOLVED IN CONFRONTATION THAT LED TO MA’KHIA BRYANT’S DEATH WERE ALL ADULTS, POLICE SAY

Surveillance video of the ensuing altercation shows four people standing in front of that home. As Columbus police officer Nicholas Reardon is pulling up to the house, Bryant and two other people appear to come out of the front door.

Seconds later, Bryant lunges with an apparent knife at one woman, 20, who had been standing in the driveway of the home, forcing her to the ground. A man, 43, started kicking the woman as she tried to get up.

Bryant then turned to another woman, 22, with the knife, at which point Reardon discharged four shots from his firearm, fatally striking Bryant.

In 911 calls Columbus Police have released of the incident, an unidentified female can be heard speaking while arguing goes on in the background. 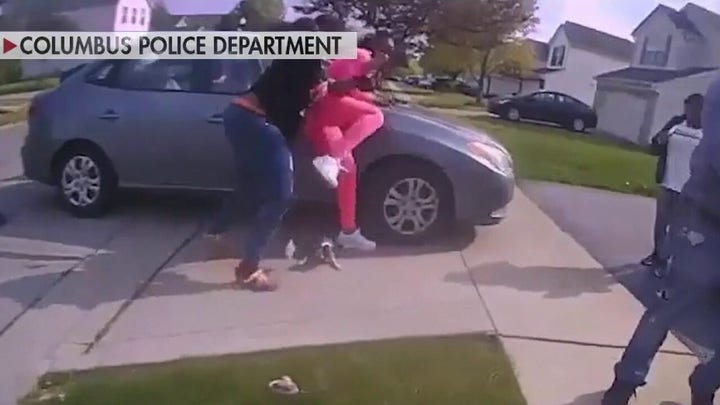 NEIGHBOR WITH FOOTAGE OF SHOOTING: ‘THE VIDEO DOESN’T LIE’

“What’s going on?” the dispatcher asks.

“Come up here!” the woman shouts. “We got … grown girls over here trying to fight us, trying to stab us, trying to put her hands on our grandma, get here now!”

“Do you see any weapons?” the dispatcher then says while the arguing continues from the other end of the line.

“We need a police officer here now!” the woman says before eventually hanging up.

In a second 911 call, another unidentified woman – who sounds different than the first caller – gives the address where the shooting happened and then says, “Never mind the police are already out here, never mind, thank you.” 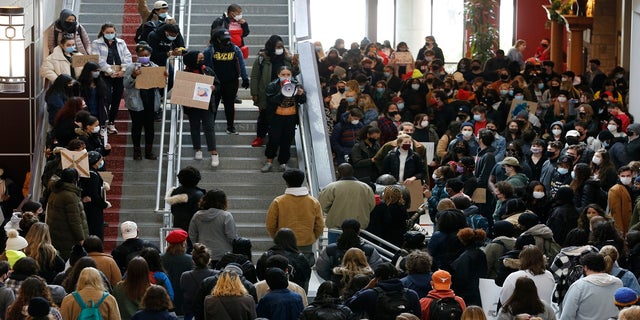 Students gather at the Ohio Union on the campus of Ohio State University on Wednesday to protest the shooting of Ma’Khia Bryant. (AP)

Moore told CNN that during the argument over cleaning, Bryant, according to another girl inside the house at the time, said, “You’re not the guardian of me.”

“They argue all the time, but I never thought it would escalate like that,” Moore added.

The foster mother said she was at work when the incident unfolded and had gotten a phone call from the 22-year-old woman – seen in police body camera footage as wearing all pink – demanding that she return home.

“Mom, get home. Where are you? They’re going crazy,” Moore said to CNN, recalling what she was told on that call. “She said they shot Ma’Khiz and I said, ‘Huh?’ It was just crazy.”

Moore said she then started receiving text messages on her phone from people saying, “I’m sorry,” and learned of Bryant’s death upon returning to the property.