Man struck by L.A. deputies during arrest may lose his eye, family says

The relatives of a Black man who was arrested in Inglewood, California, this week are demanding accountability after they say authorities held a gun to his head and beat him so severely he may lose an eye.

Video of the arrest captured by onlookers shows deputies punching Blake Anderson, 24, in the head, grabbing him by the neck, pushing him to the ground and holding a gun to his head before they slam his head into the ground in the city just outside Los Angeles.

“He was walking with me. He did nothing,” an onlooker says.

The Los Angeles County Sheriff’s Department said Anderson was armed. It has said that during the arrest, Anderson “sustained minor injuries” but was cleared at a hospital.

Disturbing video from a nearby security camera shows deputies approached Anderson early Sunday outside a hookah lounge where he worked as a security guard, according to his mother and his sister, who said he was on duty at the time of his arrest.

Representatives for the hookah lounge could not immediately be reached to verify whether Anderson was working when he was arrested. 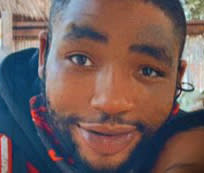 The security video shows Anderson walking with a woman in a strip mall while a patrol car drives through the parking lot. The vehicle stops. Anderson and the woman turn and begin walking in the opposite direction just before a law enforcement officer rushes out of a nearby car and slams Anderson against a window.

A second officer then approaches and puts his arm around Anderson’s neck as two deputies push him to the ground.

He was released on bond the same day, according to an online record, and his next court date is Nov. 15.

Anderson’s mother, Tiffany Flemming, said a bystander FaceTimed her after the arrest. Flemming said that she asked why her son had been detained and that an officer — not one of the two seen on video beating Anderson — told her he did not know why.

“I said, ‘How would you be investigating now to see? You should’ve already known [why] when you guys approached him,'” she said.

“I felt like it was racial profiling,” said Flemming, who lives with her son in Lancaster, about 75 miles from where he was arrested.

She said she wants the law enforcement officers involved in the incident fired.

The sheriff’s department’s Internal Affairs Bureau is reviewing the incident, the department said in a prepared statement.

It added that officials are “unable to comment further due to a pending investigation,” and a spokesperson did not reply to a request for additional comment.

Flemming and Anderson’s sister, Bailey, 19, said an ophthalmologist has recommended removing Blake’s eye and replacing it with a prosthetic.

Anderson ruptured the eye this summer when he was struck by a pole, said his mother and his sister, who said his vision had started to improve but has deteriorated again since his arrest.

NBC News could not independently verify Anderson’s condition or the incident from the summer.

Bailey said Anderson tried to tell the deputies about the condition of his eye when they slammed him into a window, according to a GoFundMe page she set up to help cover his medical expenses and attorney’s fees.

Anderson also had a dislocated shoulder and several hematomas around his head after the arrest, Bailey said.

A sheriff’s department with a troubled history

Last year, a state civil rights investigation was opened into the sheriff’s department over allegations of excessive force. A spokesperson for the state attorney general’s office said the investigation is ongoing and that officials could not comment further as a result.

The department has also been criticized for “deputy gangs,” which a 2021 report released by Loyola Law School numbered at 18.

Department officials shot and killed Andres Guardado, 18, in June 2020. An independent autopsy his family released in July said he was shot five times in the back. Sheriff’s detectives placed a security hold on the county coroner’s conclusions, a move Sheriff Alex Villanueva defended as necessary to preserve the investigation’s integrity. But the coroner’s office launched a rare inquest that found Guardado’s death was a homicide, and the deputy who shot him declined to testify.

A few months after Guardado’s killing, leaders of the U.S. House Oversight and Reform Committee demanded the Justice Department investigate the sheriff’s department, alleging the deputy cliques “adhere to white supremacist ideologies, belong to ‘criminal gangs,’ and engage in an ‘aggressive style of policing’ motivated by racism.”

‘His life could have been taken away’

Anderson’s sister, Bailey, said it was “very traumatizing” to see video of deputies beating her brother and brandishing a gun.

“His life could have been taken away in that moment,” she said.

In the video, the person recording screams that Anderson should not resist arrest as the deputy has a gun near his head.

“Do what you gotta do … don’t fight back,” the onlooker says.

Flemming said watching that moment was “terrifying, especially me being so far away, I couldn’t get to him in enough time — I felt like I was going to have a heart attack.”

Spokespeople for the L.A. and Inglewood police departments said they could not comment on the actions of another law enforcement agency.