A man has been jailed for 25 months after he headbutted his girlfriend in the street and then bombarded her with messages promising to ‘look after her’ with his alleged £4million lottery win if she didn’t attend court.

Mark Goodram, 37, left his partner with a deep cut across her forehead when he struck her at 4am in Bolton town centre, Greater Manchester.

The father-of-two then pursued his victim, telling her he loved her, before grabbing the woman by her top and throwing her around. He was arrested that evening and held at Forest Bank prison.

Goodram and friend Jon-Ross Watson, 31, have been accused of fraud over their £4million scratchcard after Lotto chiefs found neither of them owned a bank account.

Camelot has refused to pay the pair, accusing them of using another person’s debit card without permission to claim the prize. They have enlisted the help of celebrity barrister Henry Hendron – once of Strand Chambers in London – to fight for the money and £320,000 interest.

Goodram, who has 23 convictions for 46 offences, pleaded guilty to charges of grievous bodily harm and perverting the course of justice in Minshull Street Crown court.

He had been smoking cocaine and drinking cider before the attack on September 25 last year, the court heard. 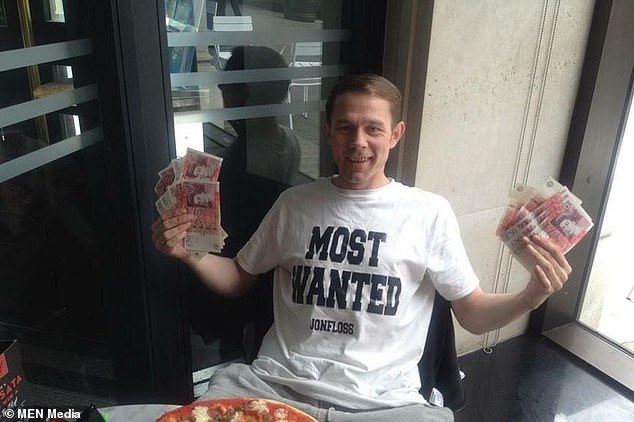 Goodram had claimed he won £4million with a scratchcard. However, Lotto rejected his claim after establishing he had no bank account and launched a criminal investigation

Before the hearing, Goodram repeatedly called and sent letters to his partner begging her to ‘tell police she was drunk and had fallen over’ and alleged he had ‘enjoyed a large lottery win and would look after her’.

Prosecution barrister Daniel Calder said before headbutting his victim the father dragged her by the arm, called her a ‘slag’ and shouted ‘I want my f****** stuff’.

A paramedic said the victim’s wound was so deep her skull was visible.

The woman told the court, in a victim personal statement, that since the assault she has suffered headaches, dizziness, disturbed sleep and memory loss.

She said she was left feeling sad, angry and depressed. The unsolicited contact left her feeling ‘disgusted, intimidated and pressured’.

A scar, caused by the incident, is still visible on her forehead.

Judge Graeme Smith sentenced Goodram to 25 months in prison – 20 months for grievous bodily harm and five months for perverting the course of justice. He also issued a restraining order against Goodram for three years. 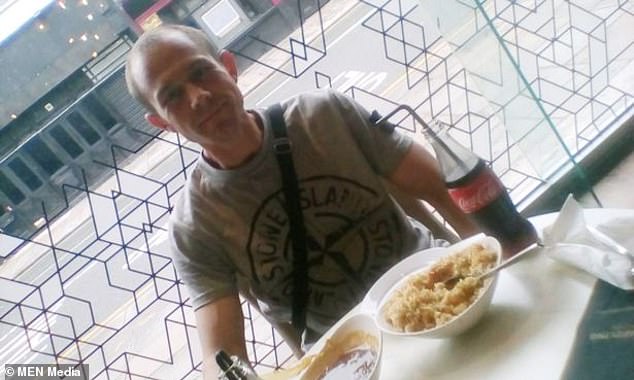 Camelot has refused to pay the money. Goodram is locked in a legal battle with them to get the money and an additional £320,000 interest

‘Although it was only a single blow,’ he said, ‘it was obviously a very forceful blow using your head because it did result in a very significant laceration’.

‘There are a number of aggravating features; you were under the influence of drugs and alcohol, the domestic violence guidelines are relevant, you were subject to post-sentence supervision at the time, and there is an ongoing effect on the victim.

‘On the other hand, you have shown remorse.’

Judge Smith also branded Goodram’s letters to his victim ‘a serious and protracted attempt by you to put pressure on her.

‘Not only did you offer her an inducement to lie to the police but you directly threatened her.

‘Therefore I do view it, albeit you were in custody and did not succeed in your attempts, as a serious attempt to pervert the course of justice.’

Judge Smith admitted the sentence could have been slightly longer had it not been for the coronavirus lockdown.

‘I do accept that the prison environment now is very different than what it has been prior to the lockdown,’ he said.

‘And maybe for some time to come so that maybe, in my judgement, justify a small reduction in the overall sentence.’ 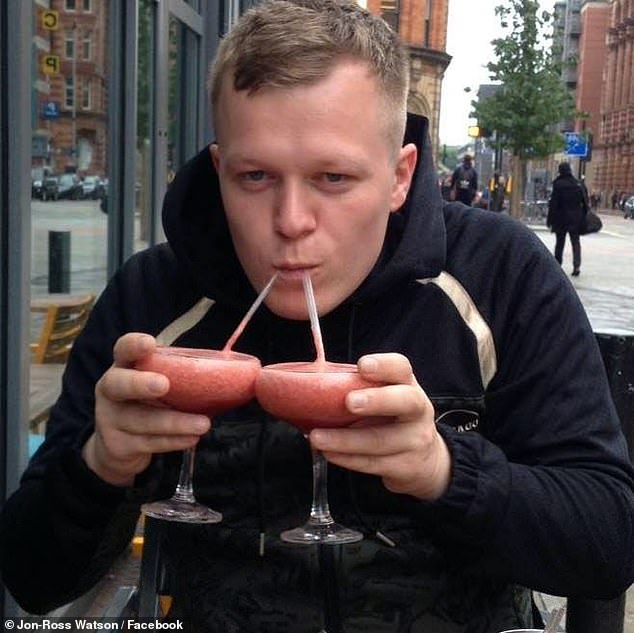 After Goodram and another Bolton man – Jon-Ross Watson (pictured), 31 – attempted to claim the winnings, National Lottery chiefs found neither of them owned a bank account

His defending barrister, Hugh Barton, said that while the 37-year-old has a lengthy criminal record, most of the crimes are ‘dishonesty’ and that the attack was ‘out of character’.

Mr Barton added that Goodram has a long-term struggle with substance abuse, he has anxiety and depression, and is estranged from his family.

On CCTV taken from Bradshawgate, Mr Barton said Goodram and the woman could be seen to argue and fall out many times, and that both appeared to be ‘heavily intoxicated’.