Met Office warns homes could be 'flooded quickly' in thunderstorm

The Met Office has warned that homes could be ‘flooded quickly’ and the country faces a risk of lightning strikes, hail and power cuts as it issued a yellow weather warning for swathes of England.

The warning, which is in place until 1pm today, said that there is a small chance that homes and businesses could be flooded quickly, and could bring delays and some cancellations to train and bus services.

It comes as the Met Office predicts continued rain and unsettled weather for the remainder of the week and into next in its 10 Day Trend report.

A yellow warning also flags the risk of lightning strikes, hail and strong winds, which could bring power cuts, with some services to some homes and businesses lost.

The forecaster has also warned of ‘difficult driving conditions’ with spray from the water and sudden flooding causing road closures.

The warning spans eastern parts of England, beginning at Newcastle and ending north east of London, as it sees the most persistent rain.

Grahame Madge, spokesman for the Met Office, told MailOnline that the wet and windy condition could continue into next week, as a large area of low pressure draws up warmer, moist air, bringing rain to the UK. 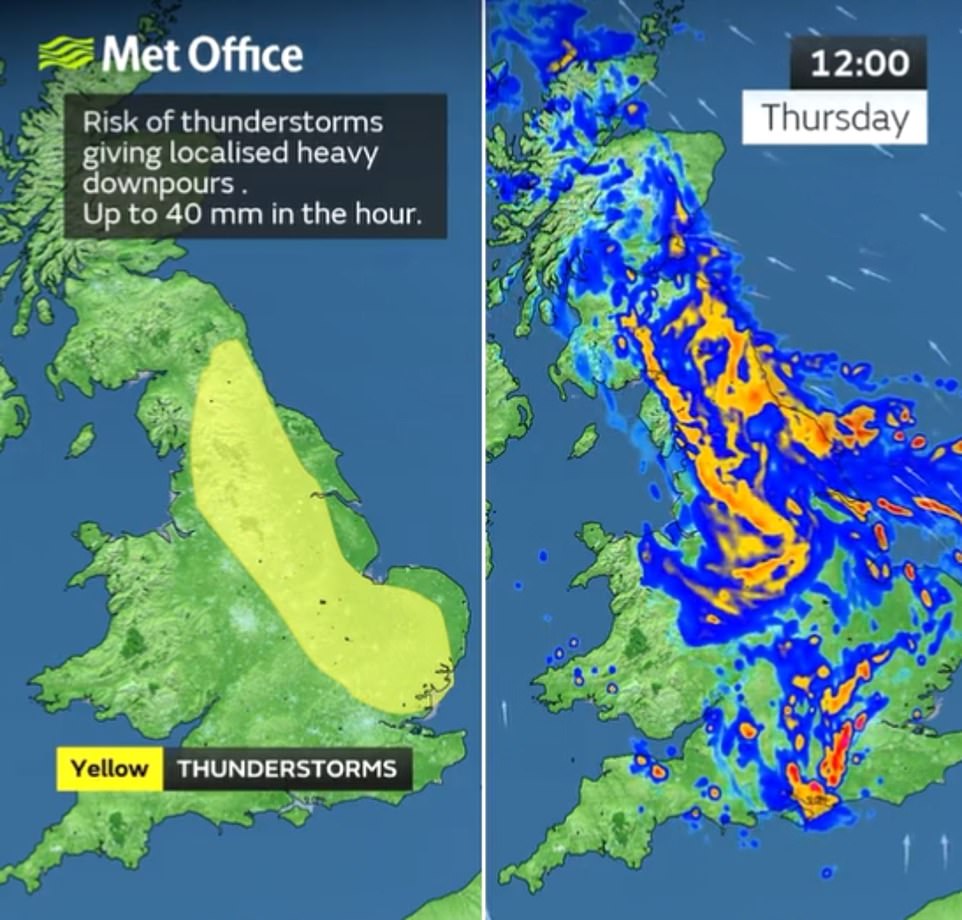 A yellow warning also flags the risk of lightning strikes, hail and strong winds, which could bring power cuts, with some services to some homes and businesses lost 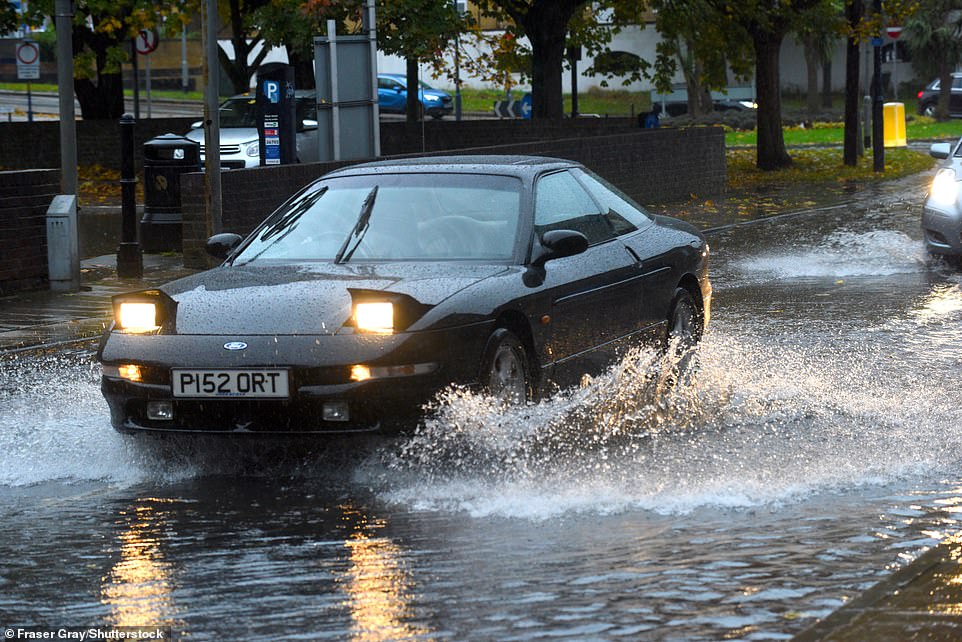 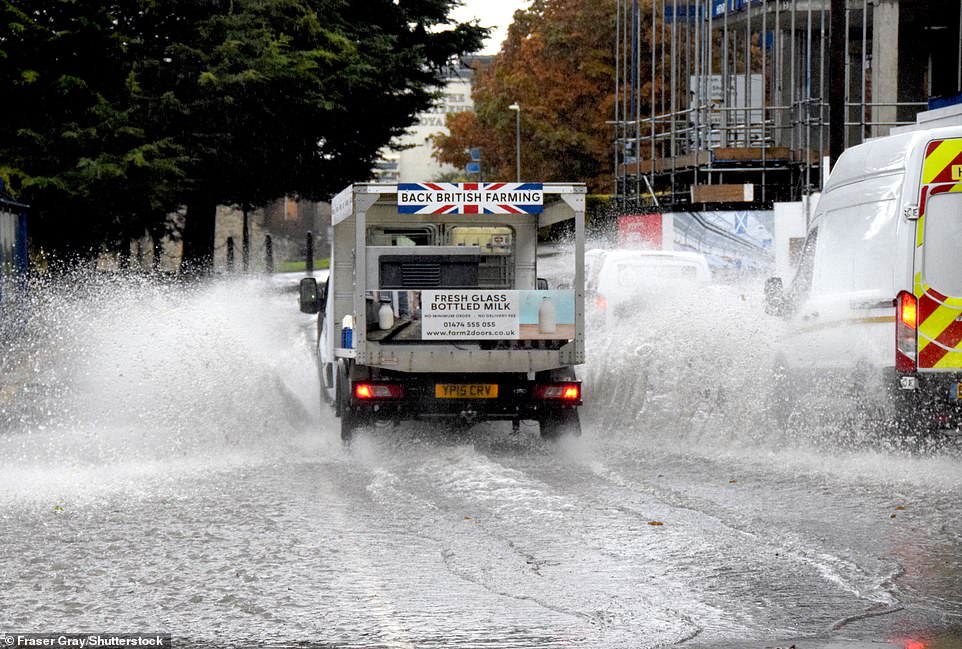 A van makes its way through floodwater in Gravesend, Kent after it was struck by flash flooding following this morning’s rain 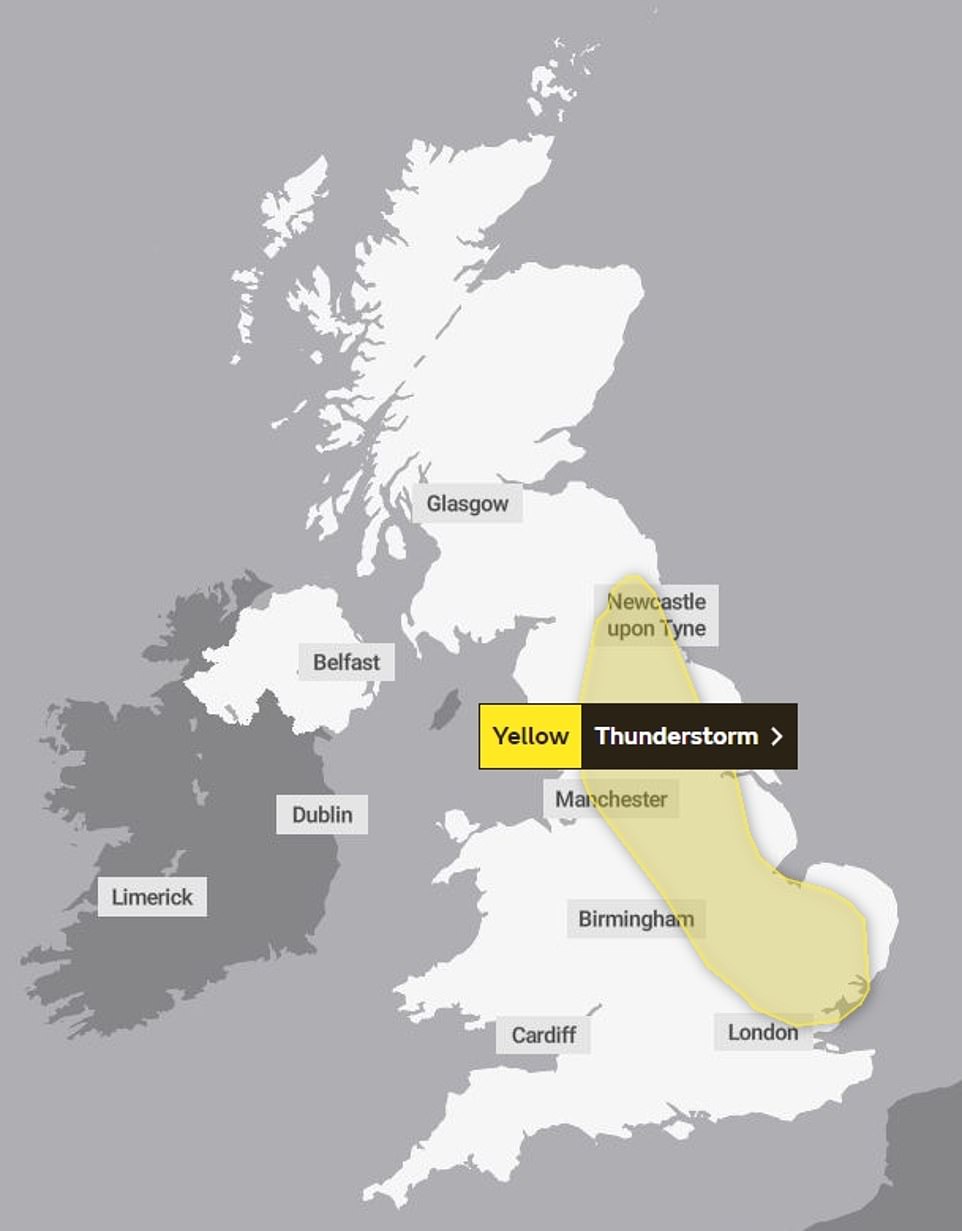 The warning, which is in place until 1pm today, said that there is a small chance that homes and businesses could be flooded quickly

He said that the thunderstorm warning, which was issued with immediate effect, is bringing ‘bursts of lightning’ to eastern parts of England.

The Environment Agency has also issued a flood alert for the River Maun in Nottinghamshire. In a post on social media, it warned that ‘just 30cm of flowing water is enough to move your car’ as it called on drivers not to go through floodwater.

‘There will be rain possible until the end of the week, with interludes of more settled conditions,’ Mr Madge said. ‘It’s an unsettled picture with more wind and rain.’

This, he said, will remain in place due to the jet stream, which is ‘anchored’ in it position, bringing heavy bouts of rain, and blustery conditions.

However as it drags warmer air up from the south, it means the UK is seeing higher than average temperatures for this time of year, by a round 4C.

Despite the weather warning today, some parts of the country will see sunshine, with brighter conditions expected over Northern Ireland, Wales and southwest England. 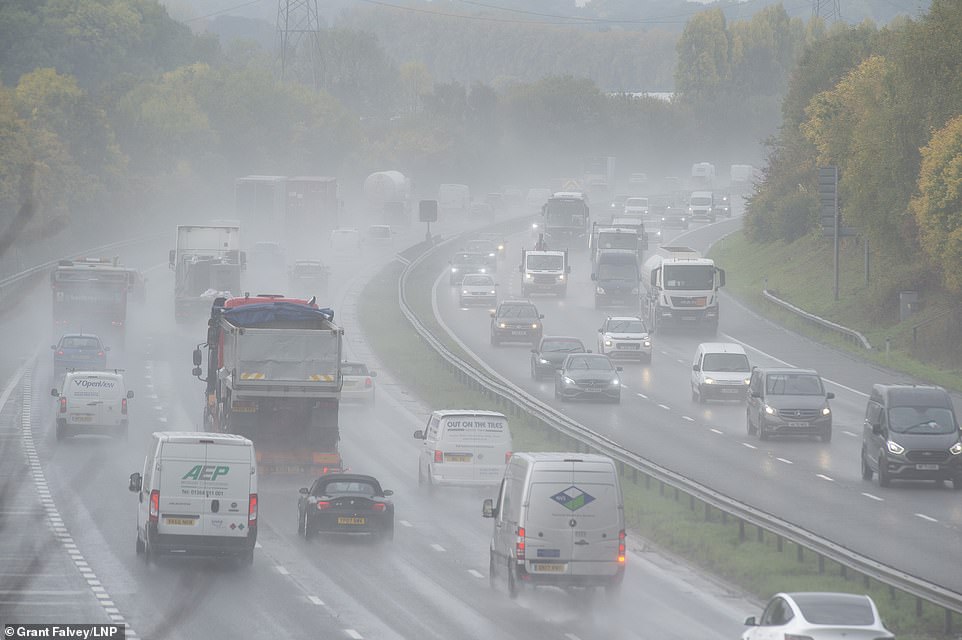 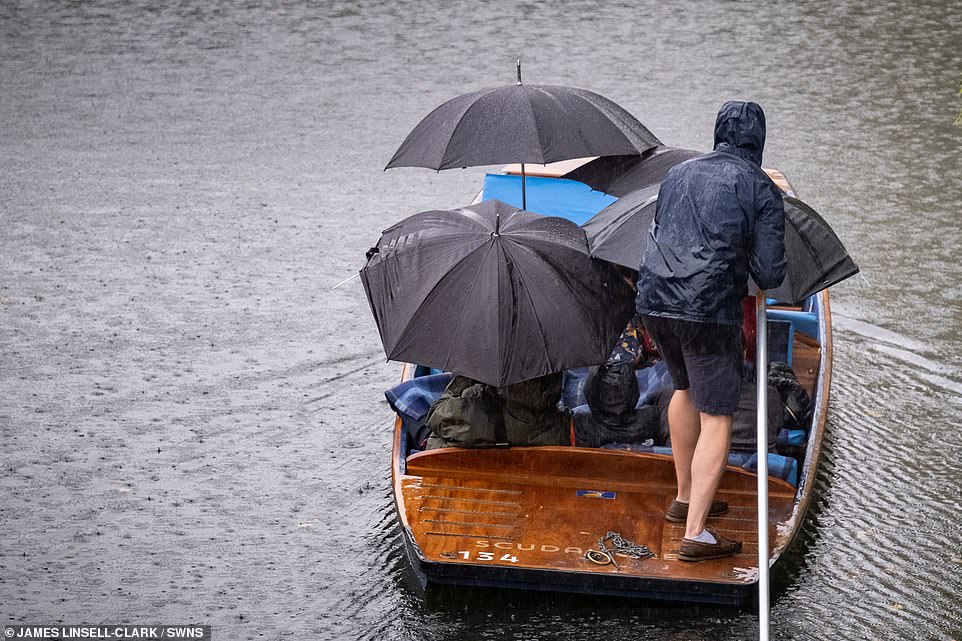 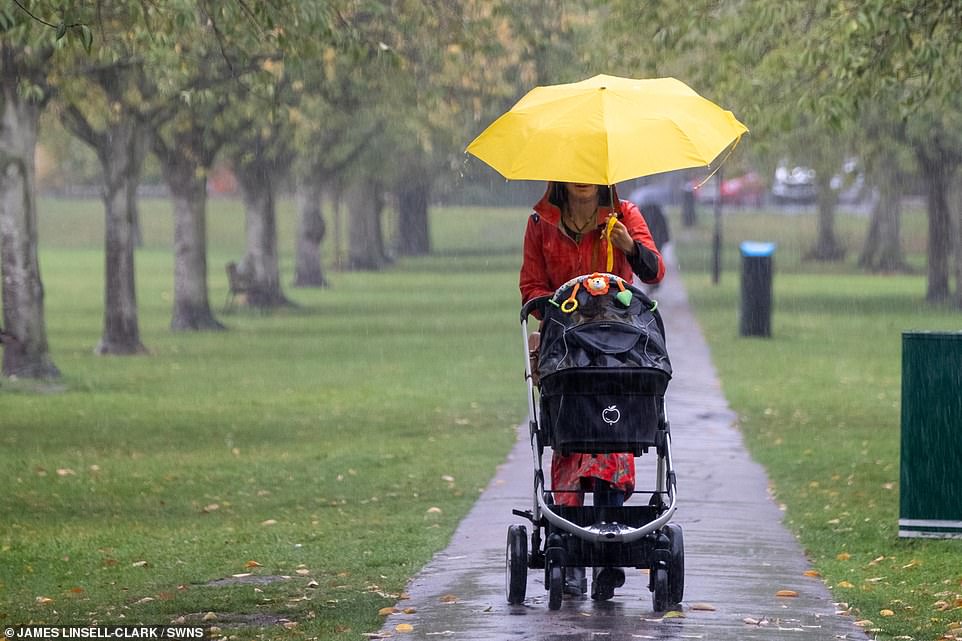 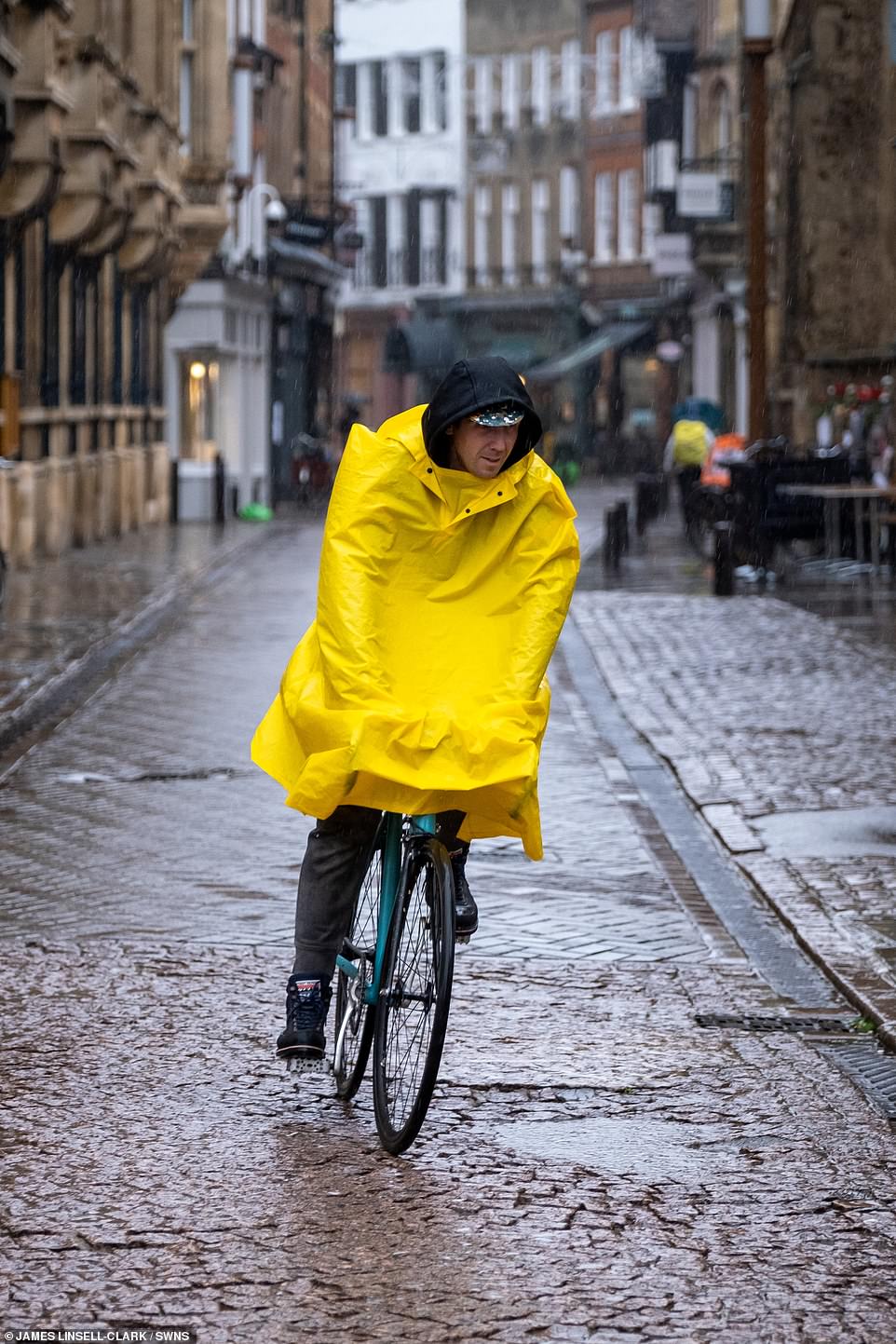 By this evening, the rain over northern and eastern England and Scotland will become mainly confined to northern Scotland, while the southwest becomes windy and showery with some fog patches developing.

Speaking in the Met Office 10 Day Trend, Meteorologist Alex Deakin said: ‘We’ve got this large area of low pressure. It’s a mature feature, which means it’s been around for a while.

‘The reason it’s not shifting is because of the position of the jet stream, which is driving south through the Atlantic and creating a trough, allowing this low to mill around and driving up other weather fronts.

‘Fast forward to Monday and the pressure hasn’t really changed very much. The low has shifted a little bit further north.

‘There’s another one spawning out in the Atlantic and the jet stream hasn’t really shifted either. So that means bands of showery rain over the next five days, with the isobars often squeezing together, bringing spells of gusty winds.’

‘Between these weather fronts, there will, at times, be spells of sunshine and when the sun is out it’s going to feel quite mild,’ Mr Deakin added.

The wet weather is expected to stay tomorrow, with cloud and rain over northern Scotland at times.

Other parts of the country will see windy and showery conditions which become heavy at times, albeit broken by some sunny spells.

The Met Office expects the weekend to remain unsettled with periods of rain or showers, sometimes becoming heavy.

This rain will be broken by drier and brighter interludes too, with it becoming windy in the south of England by Monday as the northeast is hit by more heavy rain and occasionally thundery showers.

As the wet weather continues to hit the UK, it will bring a risk of coastal gales in the southwest at times. There is also a risk of stronger winds or gales in the north and west.