Millionaire property tycoon, 57, is locked in court battle with his partner of 20 years and mother of his five children over who owns their £2.15m Chelsea home

A millionaire property tycoon has escaped the threat of jail in a court fight with the mother of his five kids over their £2.15m Chelsea home.

The house in Chelsea, in which they raised their children, is now at the centre of a tug of war between the wealthy former couple, with both Mr Andreewitch and Ms Moutreuil claiming the Grade-II listed home, a few doors from the cottage where Laurence Olivier and Vivien Leigh lived, belongs entirely to them.

Peter Andreewitch, left, and Magali Moutreuil, right, split up in 2017 after spending almost 20 years and having five children together. The pair are battling in the High Court over the ownership of a £2.1 million property in Chelsea where they reared their family 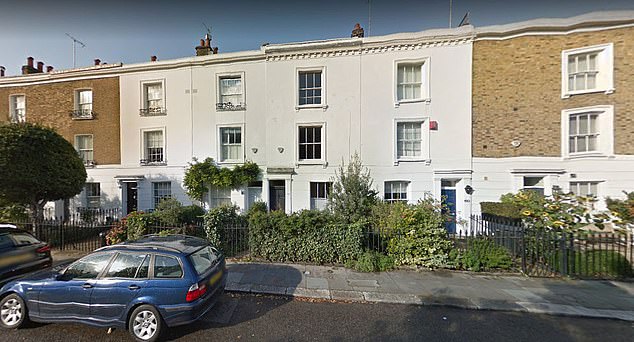 The battle escalated earlier this year when Ms Moutreuil won a court order that could have seen her former partner committed to prison for contempt of court over financial breaches relating to the house row.

But Mr Andreewitch has now successfully challenged the order in the Court of Appeal, where top judges found that he had not received a fair trial when he faced off against Ms Moutreuil in the divorce courts.

The Court of Appeal in London heard that the seed of the row over who gets the multi-million pound mortgage-free former family home, were planted in July 2000 when the couple had been together just two years.

The house had been owned since 1993 by Mr Andreewitch through a company, Pier Investment Company Ltd, but in 2000 he transferred ‘the entirety of the shares in the company’ to his then new girlfriend Ms Moutreuil.

He made the move in a bid to ‘shield’ his UK properties from ‘future exposure,’ he told the court, but had never intended Ms Moutreuil to be the beneficial owner of their house.

After their relationship broke down in 2017, but whilst they were still living together in the home with their kids, Mr Andreewitch ‘began to insist to Ms Moutreuil that she had no rights or interests in the property.’

However Ms Moutreuil refused to back down to pressure from her wealthy former partner, who the court heard has a number of ‘UK properties’ as well as having previously invested in real estate in eastern Germany.

During their family court battle earlier this year, Mrs Justice Lieven said Ms Moutreuil’s case was that while feeling a ‘moral obligation’ to her former partner, ‘she has outright ownership of the shares and property.’

‘Mr Andreewitch’s position is that she has no interest whatsoever in the property and shares,’ the judge added.

The judge went on to find that Mr Andreewitch had breached a freezing order imposed in March 2019 banning either of the warring couple from withdrawing money from the bank account of the company through which the house is owned, except for legitimate company reasons.

Ms Moutreuil said that her former partner had flouted that order and ‘effectively used the bank account as his personal piggy bank, making regular payments out of it,’ both before and after the freezing order was made.

But Mr Andreewitch insisted that all payments out of the company account were legitimate, being either his salary, repayments of loans he had made to the business, or money to cover the company’s legal expenses.

Mr Justice Lieven dubbed Mr Andreewitch ‘an unreliable witness’ and concluded: ‘I have found that he did breach the order and did so in deliberate and full knowledge that he was in breach of it.’

But the Court of Appeal overturned that finding because the divorce judge had failed to inform Mr Andreewitch that he had the right to remain silent at the committal application brought by his former partner.

The property investor, who was representing himself without the help of a barrister, underwent a lengthy cross examination about payments made from the account before the judge found he had breached the freezing order.

It had been ‘a serious procedural irregularity’ for Mr Andreewitch not to have been told by the judge that he was not obliged to answer any of the questions he faced, given that he was potentially facing jail, said appeal judge Lord Justice Peter Jackson.

‘The right to silence is a core element in criminal proceedings and proceedings of a criminal character….This is particularly important when considering procedural matters where a person’s liberty is at stake,’ he added, allowing Mr Andreewitch’s appeal in a judgment given last month.

The battle b will now return to the divorce courts, where Ms Moutreuil may have the option to bring another committal application should she wish to do so.