Ministers say people are 'still learning how to use' face masks

A Cabinet minister today insisted people are ‘still learning how to use face coverings’ after Priti Patel was pictured wearing one outside before taking it off when she went indoors.

The Home Secretary visited Calais in France yesterday to agree a deal with her counterpart to better combat people smuggling and improve security cooperation.

Ms Patel was pictured wearing a mask outdoors as she was given a tour by French Interior Minister Gerald Darmanin but footage then showed she was not wearing one during a meeting inside.

Justice Secretary Robert Buckland said this morning that the nation was still trying to get used to wearing face coverings as he revealed he wears one whenever he goes inside a shop or ‘enclosed space’ where he has not been before.

His comments further add to growing confusion over the Government’s official advice on the wearing of face coverings. 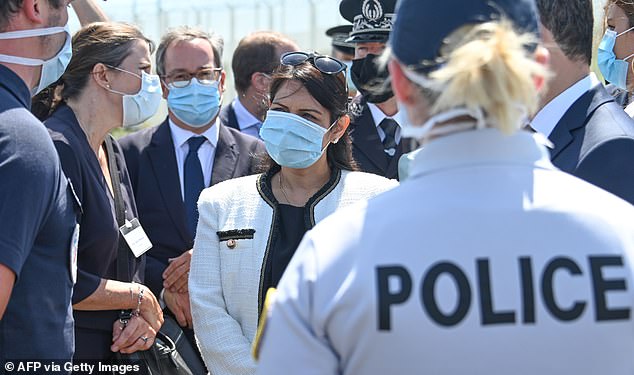 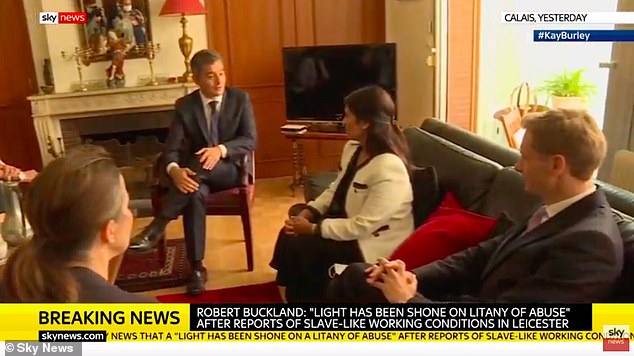 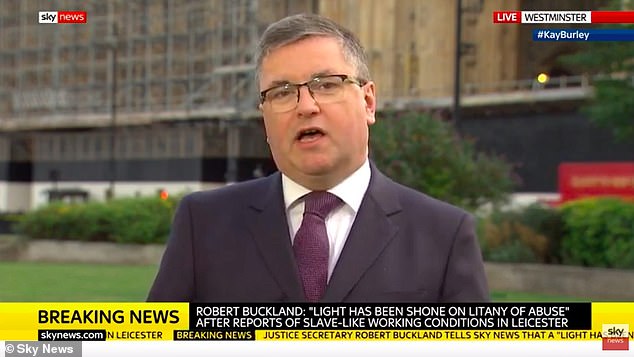 Experts believe the risk of coronavirus transmission is much higher indoors than outdoors.

Currently, public transport is the only place where people in England are required to wear a mask with the Cabinet seemingly split on whether they should be made compulsory in public spaces.

Mr Buckland told Sky News: ‘I wear a face mask in an enclosed space, if I am going into somewhere where I have not been before, that might be a small shop or somewhere like a pharmacy.

‘I carry one with me. I think it is important that I do my bit to not only prevent inadvertent transmission but also to reassure other people that the space they are in is as safe as possible.’

Told that Ms Patel had worn a mask outdoors but then had taken it off when she was inside, Mr Buckland replied: ‘People are still learning how to use face coverings.

‘Other countries we have see have habitual use of them and people are very, very experienced in knowing how to use them.’

Mr Buckland had earlier told BBC Breakfast: ‘I think a mask is just an additional helpful mitigation that isn’t just an act of courtesy. I think it’s an act of increasing safety and public confidence.’

He said wearing a mask in a supermarket ‘is a good idea’ and ‘absolutely sensible’, especially if a shop is busy.

Sources close to Ms Patel said she had adhered to French rules on wearing a face mask during her visit and that she had worn one inside when social distancing was not possible. 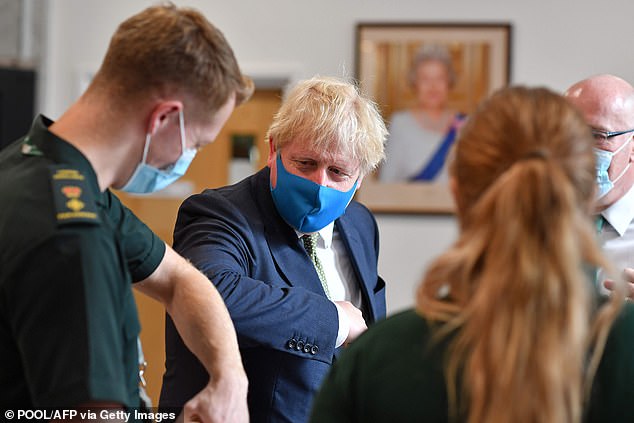 Boris Johnson, pictured wearing a mask during a visit in London today, has hinted rules on wearing face coverings in England could be toughened up

Michael Gove, the Minister for the Cabinet Office, said yesterday that face coverings should not be made mandatory in shops but that they should be worn out of courtesy and consideration for others.

Mr Gove said while the policy on mouth and nose coverings in public places was kept under review, he thought it was best to trust the public’s ‘common sense’.

Prime Minister Boris Johnson hinted on Friday that face coverings may become compulsory in shops, saying he wanted to be ‘stricter’ on insisting people wear them.

Nicola Sturgeon announced last week that wearing face masks in shops in Scotland was being made compulsory.