Home » World News » More than 11,000 deaths avoided across Europe due to cleaner air

More than 11,000 deaths avoided across Europe due to cleaner air

More than 11,000 deaths have been avoided in Europe due to cleaner air during Covid-19 lockdown, study claims, as expert compares it to ‘everyone stopping smoking for a month’

Improved air quality recorded over a month-long period of coronavirus lockdown has seen 11,000 fewer deaths across Europe, compelling the author of a new air pollution report to say it is as if everyone in Europe stopped smoking for a month.

A drastic reduction in air travel and road traffic across Europe during the lockdown has contributed to thousands of lives being spared by harmful air pollution, according to a report by the Centre for Research on Energy and Clean Air, in Helsinki, Finland.

More than 1,700 fewer deaths from air pollution occurred in the UK during the same period. Lead author of the report Lauri Myllyvirta said: ‘You could compare it to everyone in Europe stopping smoking for a month.’

In the wake of the death toll heaped up by coronavirus, CRECA experts have put a hopeful spin on their findings by pointing to the ecological and health benefits of a fossil fuel-free world.

Confirmed cases of coronavirus across the globe stand at more than 3.2 million, with more than a quarter-of-a-million fatalities. 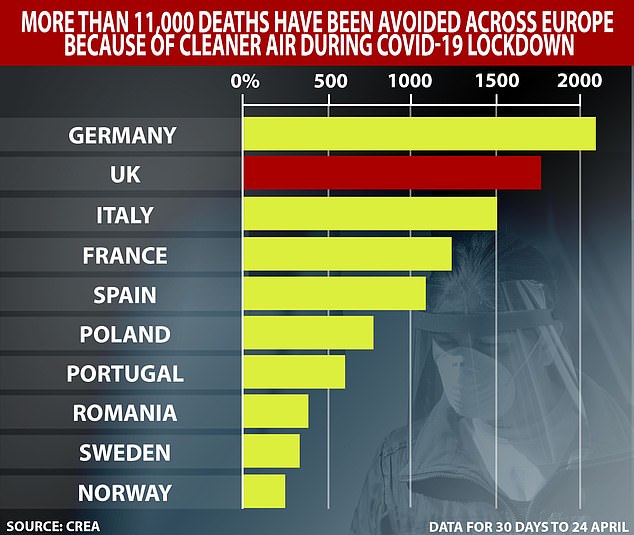 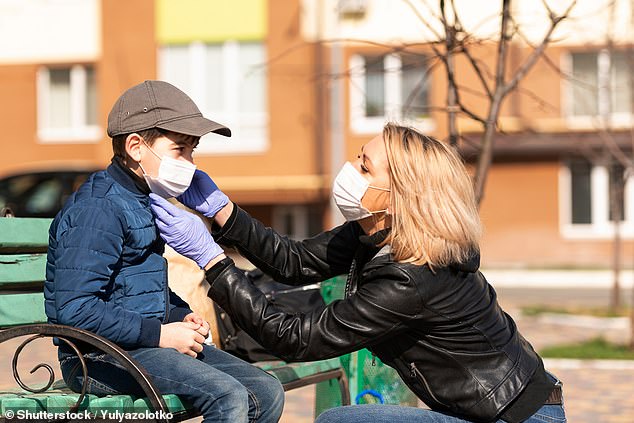 CRECA found that Germany had the highest number of avoided pollution deaths, with 2,083

CRECA’s report demonstrates that a sharp drop off in air travel, traffic and industrial emissions because coronavirus forced a general shutdown of most economies, has resulted in 11,000 fewer deaths from air pollution across Europe.

The agency has compiled a Top 10 list of European countries that have benefited most from the lockdown’s subsequent impact on air quality.

Near the top, just behind Germany, the UK is estimated to have avoided 1,752 fatalities due to lower levels of pollution.

CRECA found that Germany had the highest number of avoided deaths, with 2,083.

Other European countries including Poland, Portugal, Romania, Sweden and Norway also made it into the Top 10, but with lower recorded numbers.

Worldwide, the number of avoided deaths will be much higher. CRECA did not include deaths from coronavirus in its study. 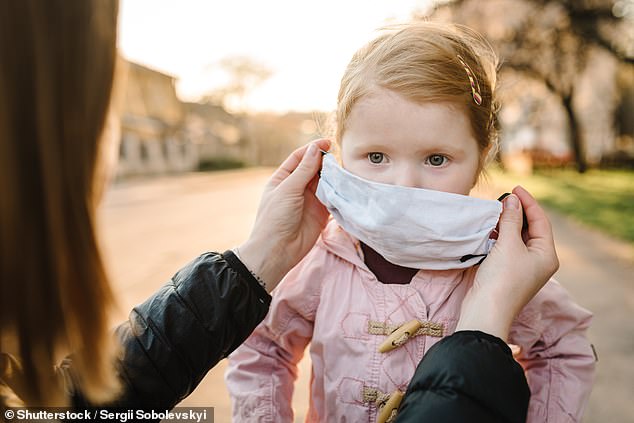 Nitrogen dioxide levels had dropped off 40%, and harmful particulates, known as PM2.5, were also down 10%

CRECA’s data also showed a reduction in air travel, traffic and industrial emissions due to the lockdown had triggered 1.3 million fewer days off work, 6,000 fewer children developing asthma, 1,900 fewer visits to the emergency room, and 600 fewer premature babies being born.

It also found nitrogen dioxide levels had dropped off 40%, and harmful particulates, known as PM2.5, were also down 10%, when compared to the same period in 2019.

It is estimated that both, in combination, account for around 470,000 fatalities in Europe every year, according to a report in the Guardian.

Dr LJ Smith, a consultant in respiratory medicine at King’s College hospital in London, backed up CRECA’s findings, saying: ‘We have seen many fewer patients admitted with exacerbations of asthma and COPD [chronic obstructive pulmonary disease] over the last month and there is no doubt that a fall in air pollution is part of the reason,’

Lauri Myllyvirta, who was lead author of the report, said improved air quality could have alleviated the immense burden health workers currently face due to the pandemic, but he was cautious about this claim. He also said: ‘You could compare it to everyone in Europe stopping smoking for a month.’

‘I am very conflicted about all of this. People are dying,’ he told the Guardian. ‘The measures we have been forced to take are causing a lot of economic and other distress, but this is an unprecedented experiment in reducing fossil fuel consumption so of course people working on air pollution are paying attention.’

He added he hoped people would consider a world where good air quality was the result of clean initiatives and not because people had been forced to stay at home due to a pandemic. ‘We have to hope this virus helps us to move forward in fighting climate change and other bigger challenges, rather than taking us back.’