Penny Mordaunt’s career to date has come under little scutiny. So Tory MPs should read ANDREW PIERCE’s troubling dossier before putting a cross next to her name again

As the helicopter hovered over the prestigious literary festival in the Welsh town of Hay-on-Wye, there was fevered speculation on the ground that the arriving passenger was Hollywood A-lister Benedict Cumberbatch.

The Sherlock Holmes actor was topping the bill at the festival where fellow thespian Damian Lewis was also due to speak.

But when the passengers emerged from the helicopter there was an audible sense of disappointment. ‘Who are they?’ went up the cry.

They turned out to be two unknown authors who had jointly written a new book, Greater: Britain After The Storm. One was a multi-millionaire public relations guru by the name of Chris Lewis; the other was Penny Mordaunt, then a junior trade minister.

Weeks later, despite being catapulted into the limelight in the Tory leadership race, Mordaunt is virtually unknown. A poll this week found that just one in nine people could pick her out from a crowd, with many who were shown a picture of her thinking she was the singer Adele.

But the manner of her arrival – by helicopter, with the bags reportedly sent ahead in a chauffeur-driven car – tells us a great deal about her vaunting ambition. As does the book she co-authored, a sort of vision for post-Brexit Britain with a foreword by none other than billionaire philanthropist Bill Gates. 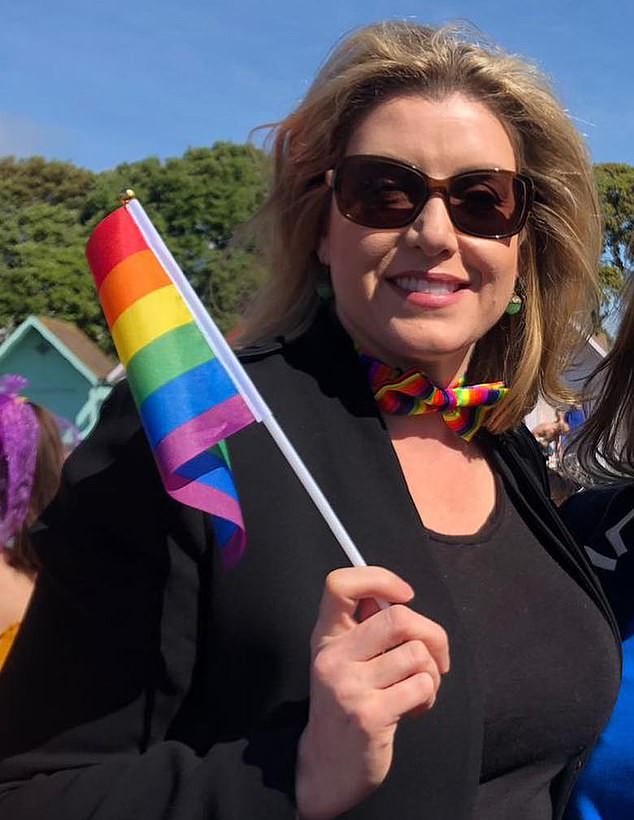 A poll this week found that just one in nine people could pick her out from a crowd, with many who were shown a picture of her thinking she was the singer Adele 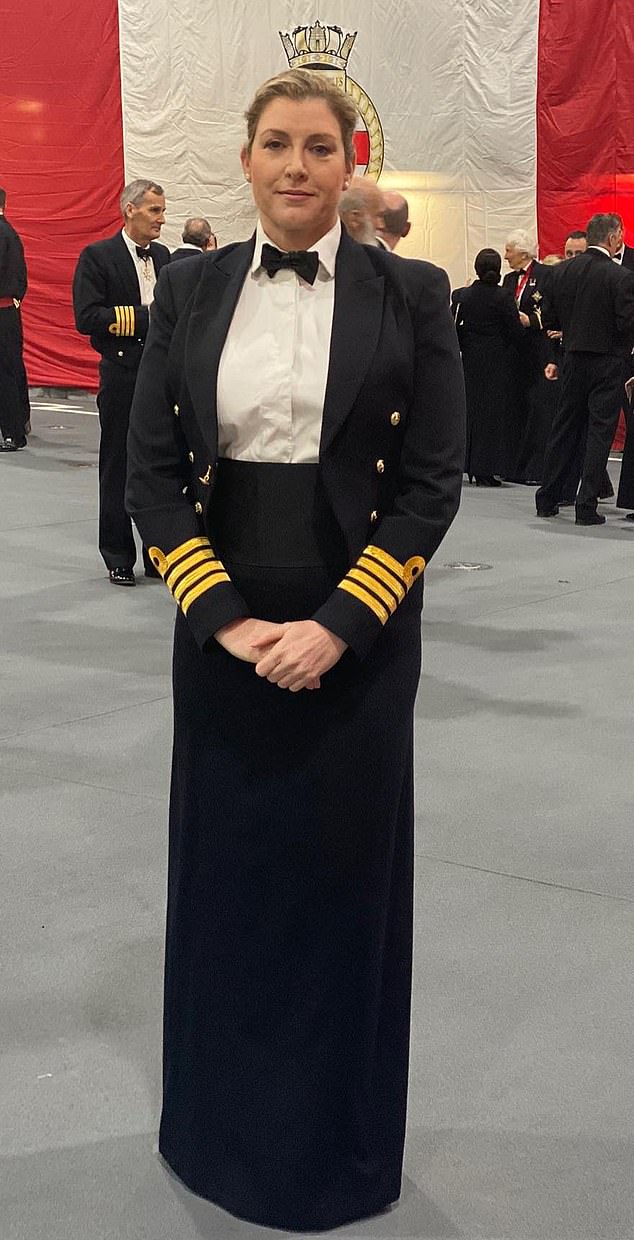 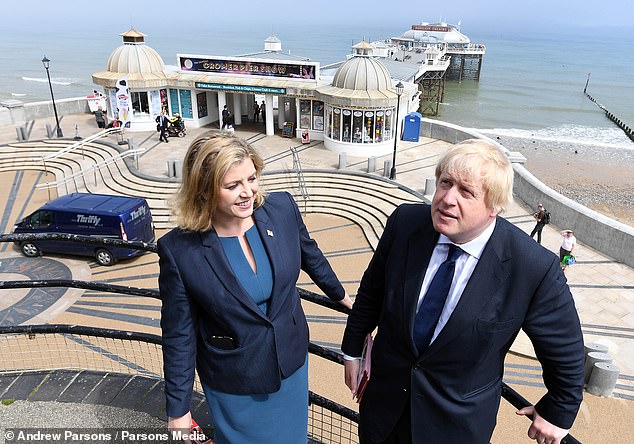 At a hustings with Tory MPs on Wednesday evening, Mordaunt was criticised over her record on trans issues

The book also gives us a telling insight into what she might plan for this country should she become Prime Minister.

For if this is her blueprint, much of it would appear distinctly unConservative to the Party faithful. It is telling that Tony Blair described the work as a ‘really important book’.

In it, she and Lewis – a Remainer who is now masterminding her campaign – tear into the ‘antiquated’ workings of Parliament, suggest there should be an elected House of Lords and that the MBE and OBE should be ditched.

They launch a surprisingly vicious attack on old British films and TV series – particularly those written by Dad’s Army creators David Croft and Jimmy Perry who are criticised for their ‘nostalgic focus’. The sitcom It Ain’t Half Hot, Mum – set in Burma during the war – is described as ‘a full-house bingo card of…casual racism, homophobia, white privilege, colonialism, transphobia, bullying, misogyny and sexual harassment’.

In fact, much of the book is a paean to wokery. As Toby Young, director of the Free Speech Union tweeted yesterday, it is a ‘great pitch for the leadership… of the Labour Party.’

So much for Mordaunt’s future plans. But what of her record which until this leadership contest has received so little scrutiny? The truth is that there are already troubling questions concerning what she’s saying in her campaign and what she actually said in the past.

At a hustings with Tory MPs on Wednesday evening, Mordaunt was criticised over her record on trans issues when she was equalities minister in 2018. Some of her views in this highly contentious area have been formed through her close relationship with her twin brother James.

Mordaunt is often spotted relaxing over a drink with him in the Pugin Room, a small panelled tea room in Parliament overlooking the Thames. He is a trans campaigner and a vocal critic of ‘privileged, white entitled Tories’. 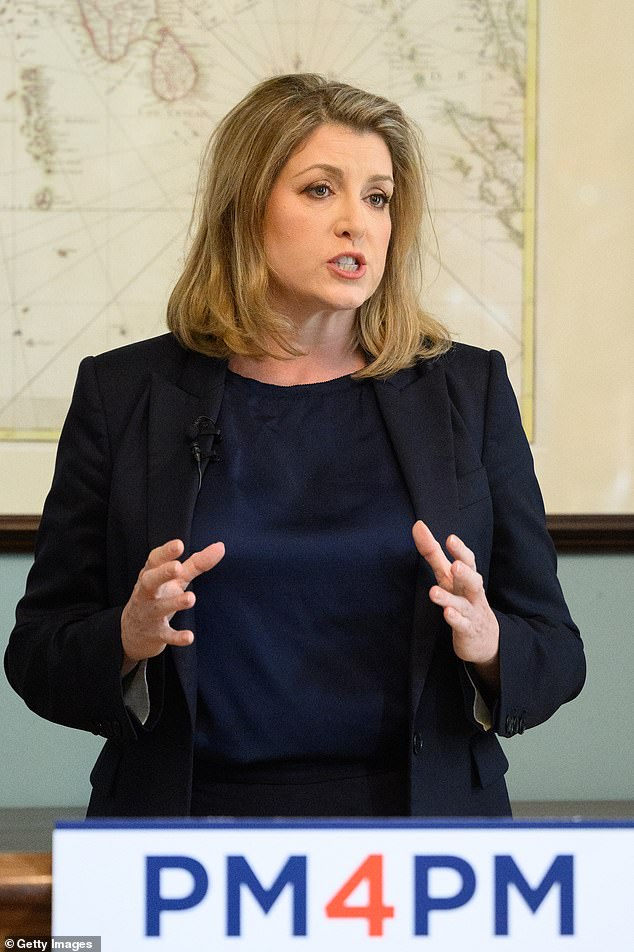 In the past, when she was equalities minister, Penny Mordaunt was unequivocal, declaring that ‘a trans woman is a woman’. Nor did she object publicly to Theresa May’s failed attempts as prime minister to introduce self-identification for trans people, meaning they could declare they had changed gender without the need for doctors to certify they suffered from gender dysphoria.

Yet this week, in an interview on the radio station LBC in which she was challenged over whether she would allow anyone to change their gender on their birth certificate at will, she declared: ‘I have never supported self-identification’.

Benjamin Cohen, the Chief Executive of PinkNews is unimpressed by this apparent inconsistency: ‘It’s incumbent on Penny Mordaunt to be clear what her views on gender recognition reform were previously and what they are now.

‘At the minute I am struggling to reconcile the views of the person I have known for a decade and who has collaborated with PinkNews for the last five years with the views she has expressed in recent days. As someone who first met Penny a decade ago, it’s the first time I’ve heard that she didn’t agree with self-identification.’

(It was only when Liz Truss, the Foreign Secretary and her rival for the leadership, took over the equalities brief when Boris became Prime Minister, that the self-identification plan was dropped).

There are also concerns with regard to Brexit. Mordaunt was a prominent campaigner with Vote Leave.

Yet Lord Frost, the diplomat who negotiated Britain’s withdrawal from the EU in 2019, and then became Boris’s Brexit Secretary, was withering yesterday about not just her commitment to the cause but also her work ethic.

Asked whether Brexit would be safe in her hands, he said: ‘I would worry, on the basis of what I have seen, we wouldn’t necessarily get that from Penny.’

He added: ‘She wasn’t always visible. Sometimes I didn’t even know where she was,’ he said. ‘It became such a problem that after six months I had to ask the prime minister to move her on. On the basis of what I saw I would have grave reservations about [her becoming PM].’

In the last few days a number of ministers have privately questioned her work ethic. ‘She’s lazy’, one told me bluntly.

At one point, Mordaunt was made deputy chairman of the Exiting Operations Committee leading the negotiations as Britain emerged from the EU. An official who used to attend meetings told me: ‘It was woeful. Mordaunt was incapable of steering the committee to the right outcome. It became embarrassing. She would just read out pre-prepared civil service briefs. She couldn’t answer questions or raise any interesting points. She often wasn’t there, and when she was others had to take over.’ 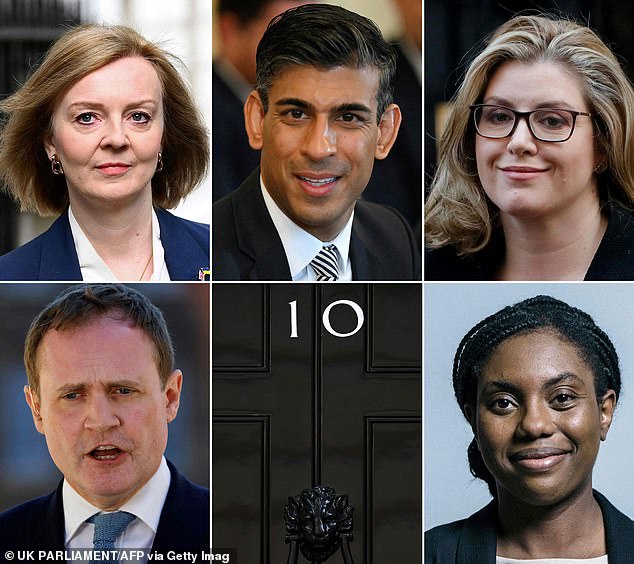 When she was appointed trade minister in September, she enraged Downing Street by refusing to travel abroad. And when a trade deal was signed with the US state of Indiana, it is claimed that Mordaunt refused to go to America or do media appearances to promote the agreement because she was going to the Hay festival to promote her book.

As MP for Portsmouth North, Mordaunt prides herself on her constitutency’s naval heritage, but she was sacked as Defence Secretary in Boris’s first reshuffle. Everyone thought it was because she had backed arch Remainer Jeremy Hunt for the leadership.

But officials suggest she could not master the technical side of the work. ‘I’m sorry she was just out of her depth,’ said one who worked in the department.

Named after the navy cruiser HMS Penelope, Mordaunt, 49, was born in Torquay where her father served in the Parachute Regiment and her mother was a special needs teacher.

Yet this daughter of the Forces now stands accused of letting down veterans during her year as the first woman Minister of State for the Armed Forces in 2015.

Mordaunt backed rather than dismantled the Iraq Historic Allegations Team (Ihat) that investigated thousands of troops for supposed war crimes.

It was shut down in July 2017 without a single veteran of Iraq ever being charged. Little wonder her decision to feature military images at her campaign launch, including footage of Second World War planes, Sir Winston Churchill and soldiers serving in various conflicts, appalled those veterans whose lives were ruined by being hounded.

Major Robert Campbell, a retired officer who endured eight separate investigations over the accidental death of an Iraqi teenager, was appalled: ‘She has no excuse. As an armed forces minister she really let us down when we needed her.’

Mordaunt’s own life was struck by tragedy when she was 15 and her mother died of cancer. She acted as carer for her nine-year-old brother Edward while her father had to take extra hours in a factory to pay the bills. She worked as a magician’s assistant as a 16-year-old to help out with the family costs, and signed up as a Royal Navy reservist.

Her interest in politics began at Reading University where she read philosophy and served as student union president. Under John Major, she was the party’s head of youth, and when William Hague took over, head of broadcasting. She became an MP in 2010 and was soon climbing the ministerial ladder.

In 2014, Mordaunt made a name for herself when she appeared in Olympian Tom Daley’s Saturday-night diving show Splash! alongside B-list celebrities such as Gemma Collins from The Only Way is Essex.

TV presenter Lorraine Kelly called her ‘an attention-seeking wannabe in a skimpy swimming costume’ and said she would prefer her to ‘concentrate on trying to get us out of this economic hell-hole than shamelessly promoting [herself] on reality TV.’ The MP said her £10,000 appearance fee would go towards repairs to a lido in her constituency and military charities.

The one thing she refuses to talk about is her brief marriage to one Paul Murray, who she met at university. The union lasted barely 12 months. It’s omitted from her entries in Who’s Who and Debrett’s. One Westminster database wrongly lists the figure zero, under ‘number of marriages or civil partnerships’. On their wedding certificate his occupation is listed as ‘assistant hall manager’, hers as a press officer.

Mordaunt found love again but eventually broke up with her long-term partner Ian Lyon, a part-time opera singer, in 2017. They had eight cats, but no children.

Which makes it curious that former Leader of the Commons Andrea Leadsom, a Brexiteer, is running Mordaunt’s campaign.

For Leadsom pulled out of the 2016 leadership contest when she was down to the last two against Theresa May. Her decision to do so followed a newspaper interview in which she declared that, because she was a ‘mother’, she was more suited to being PM than May who never had any children.

Presumably Leadsom has now changed her mind. But then inconsistencies appear not to trouble the Mordaunt campaign.