‘Let her go to Taiwan… but pray for her’: Chinese state media sends grim warning to ‘sinner’ Nancy Pelosi and Red Army releases video of missile strikes ahead of trip ‘tomorrow night’ – as Taipei says ‘prepare for war’ and cancels military leave

The Chinese People’s Liberation Army has issued another warning to Nancy Pelosi ahead of her expected trip to Taiwan with a video simulating a missile strike, aircraft carriers advancing and fighter jets in formation – and a stern warning from state media.

The video was posted on WeChat on Monday morning following reports the U.S. House Speaker will arrive in Taipei on Tuesday night – despite Beijing warning they could shoot her plane down and launch a military response.

Chinese state media personality Hu Xijin also issued a grim message to the top Democrat: ‘Let her go to Taiwan. But pray before departure: wish herself a safe journey and wish herself not be defined by history as a sinner who starts a spiral of escalation process expanding military frictions to a large-scale war in the Taiwan Strait.’

Senior Taiwanese government officials and a US official both told CNN that the stop is on her trip, even though it is not on her public itinerary.

Reports from TVBS News in Taiwan have said Pelosi could arrive in Taipei as early as tomorrow night and her team has booked two hotels, although there is no mention of the visit in her official itinerary.

The US official added that defense department officials were working on securing a plan to keep her safe, according to CNN.  The visit will inflame tensions with China, which considers Taiwan one of its own territories.

Amid the threat, Taiwanese officials reportedly have cancelled leave for soldiers and officers ‘to immediately prepare’ for the prospect of war.

Last Friday, Chinese state media said the government was prepared to shoot Pelosi’s plane down if it was detected in its airspace accompanied by a fighter jet escort.

The latest warning was issued during a Chinese foreign ministry briefing by spokesperson Zhao Lijian, who said that because of Pelosi’s status as the ‘No. 3 official of the US government’, a visit to Taiwan, which China claims as its own, would ‘lead to egregious political impact’.

Lijian added that it would be ‘a gross interference in China’s internal affairs’ and would lead to ‘very serious developments and consequences.’ 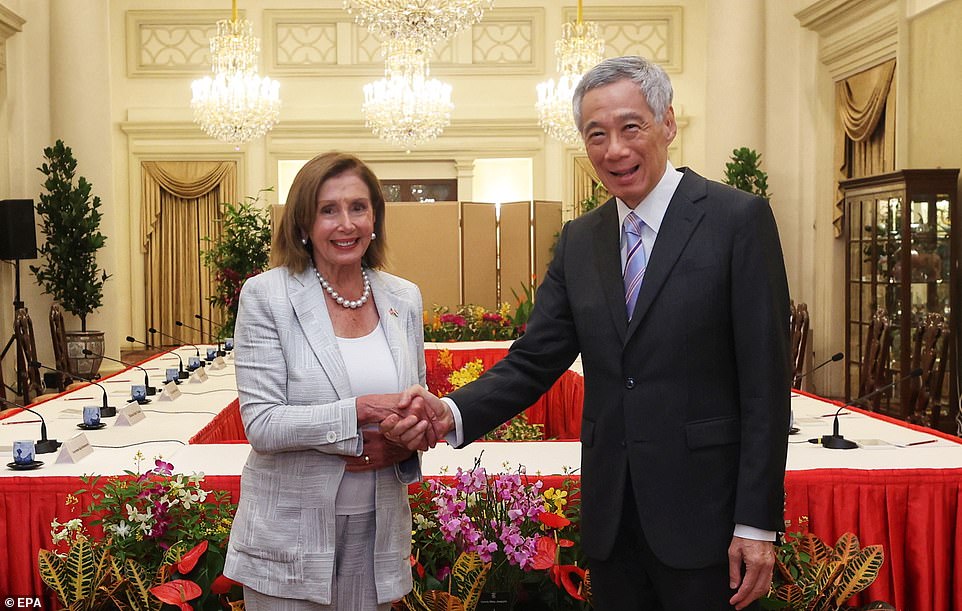 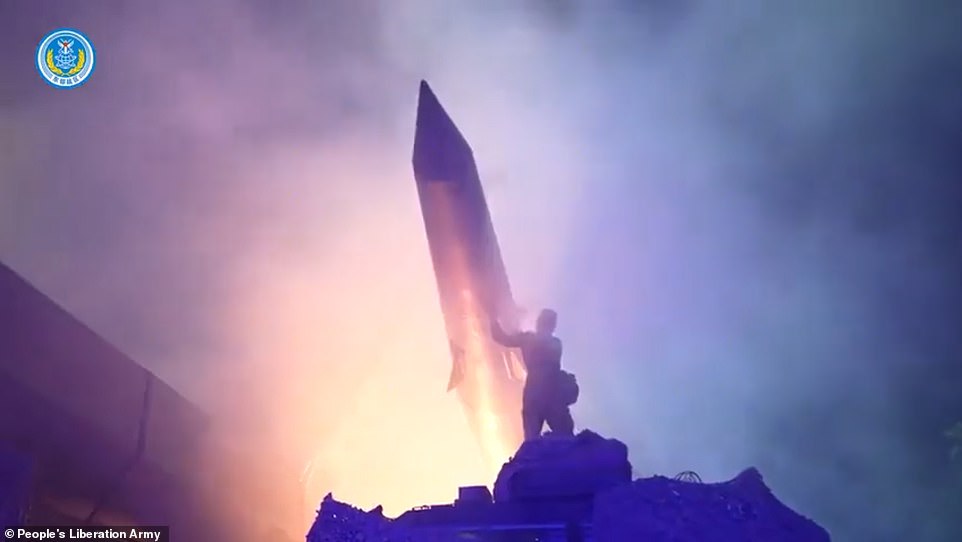 China’s People’s Liberation Army posted a video on WeChat showing missiles being launched, hours after reports of the visit surfaced 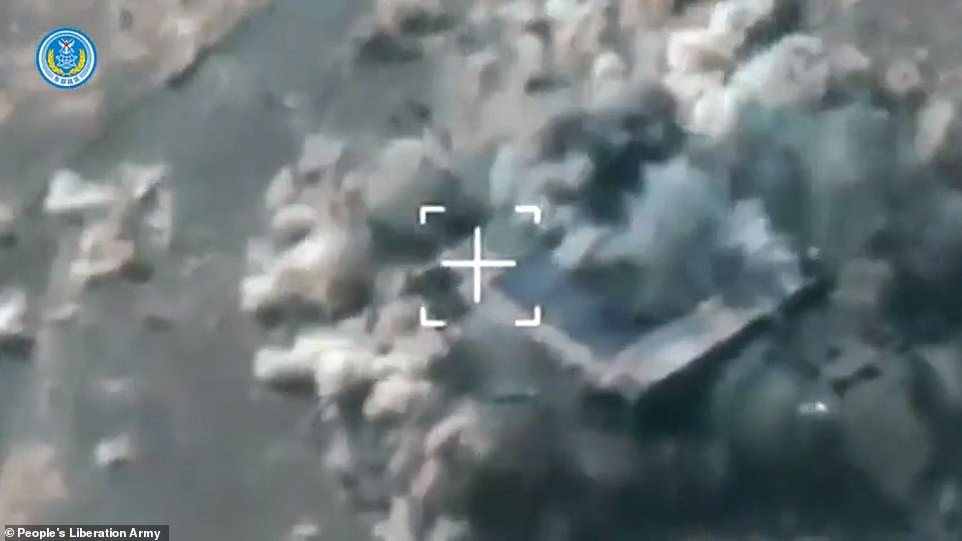 The video included missile strikes and simulated what an invasion may look like. Taiwan has also canceled leave for some soldiers in case of military action

Chinese state media personality Hu Xijin also issued a grim message to the top Democrat: ‘Let her go to Taiwan. But pray before departure: wish herself a safe journey and wish herself not be defined by history as a sinner who starts a spiral of escalation process expanding military frictions to a large-scale war in the Taiwan Strait’

‘We would like to tell the United States once again that China is standing by, the Chinese People’s Liberation Army will never sit idly by, and China will take resolute responses and strong countermeasures to defend its sovereignty and territorial integrity,’ Zhao told a regular daily briefing.

Asked what kind of measures the PLA might take, Zhao said: ‘if she dares to go, then let us wait and see.’

The White House has also sent mixed messaging on the trip. Initially, President Biden said he didn’t think it was a ‘good idea’, but last week National Security Council spokesman John Kirby said it was ultimately her decision.

Kirby was also on CNN on Monday morning criticizing the Chinese for their rhetoric.

Pelosi kicked-off a tour of four Asian countries in the early hours of Monday morning in Singapore amid intense speculation that she may risk the wrath of Beijing by also visiting self-ruled Taiwan.

The House Speaker touched down in Singapore just before 4:30am local time, where Prime Minister Lee Hsien Loong urged her at a meeting to strive for ‘stable’ ties with Beijing.

He also ‘highlighted the importance of stable US-China relations for regional peace and security’. Later, she will attend a cocktail party at the American Chamber of Commerce.

But it is her potential visit to Taiwan that is overshadowing the whole trip.

Last week, during a call with President Joe Biden, China’s Xi Jinping warned him not to ‘play with fire’ on the issue.

Pelosi would be the first House Speaker in 25 years to visit the territory after Republican Newt Gingrich.

The GOP have supported her trip and have said not going would be a sign of weakness, despite the tense rhetoric from Beijing. 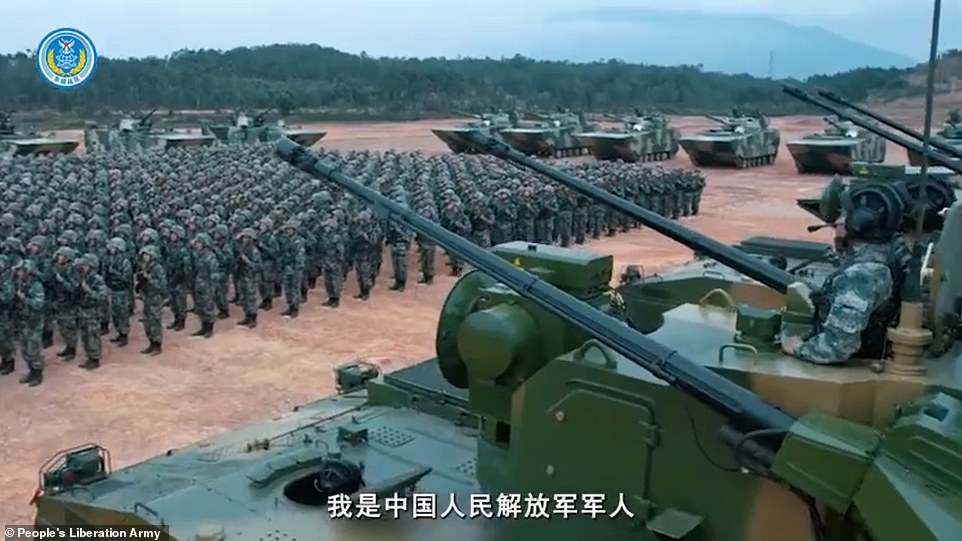 Clips from the video shows Chinese soldiers lined up in front of tanks. Beijing has said Pelosi’s trip would cross a ‘red line’ 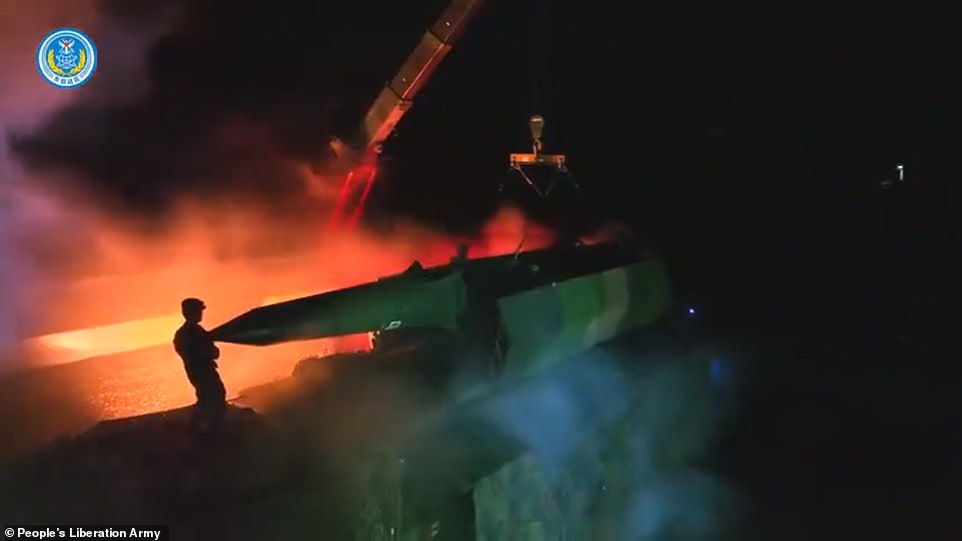 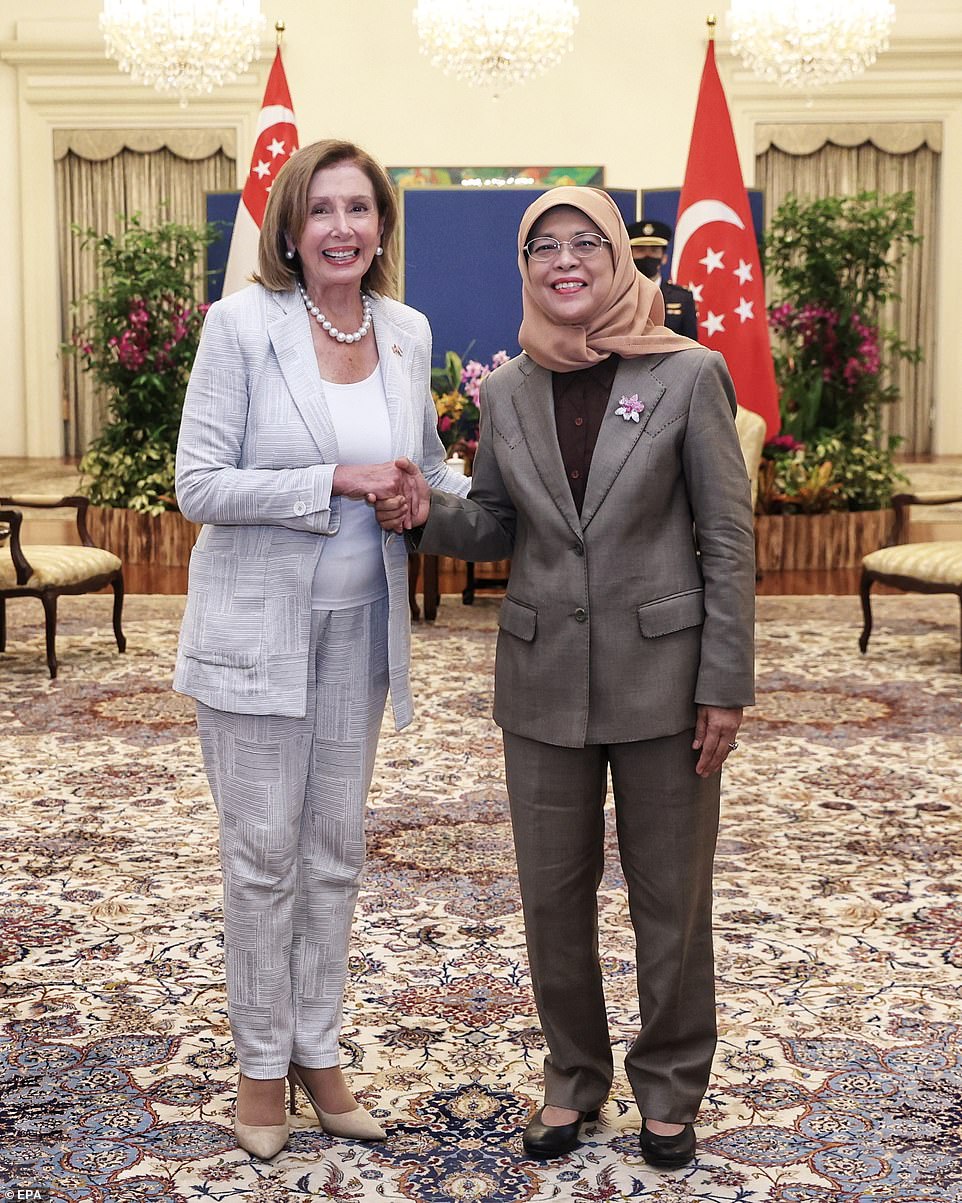 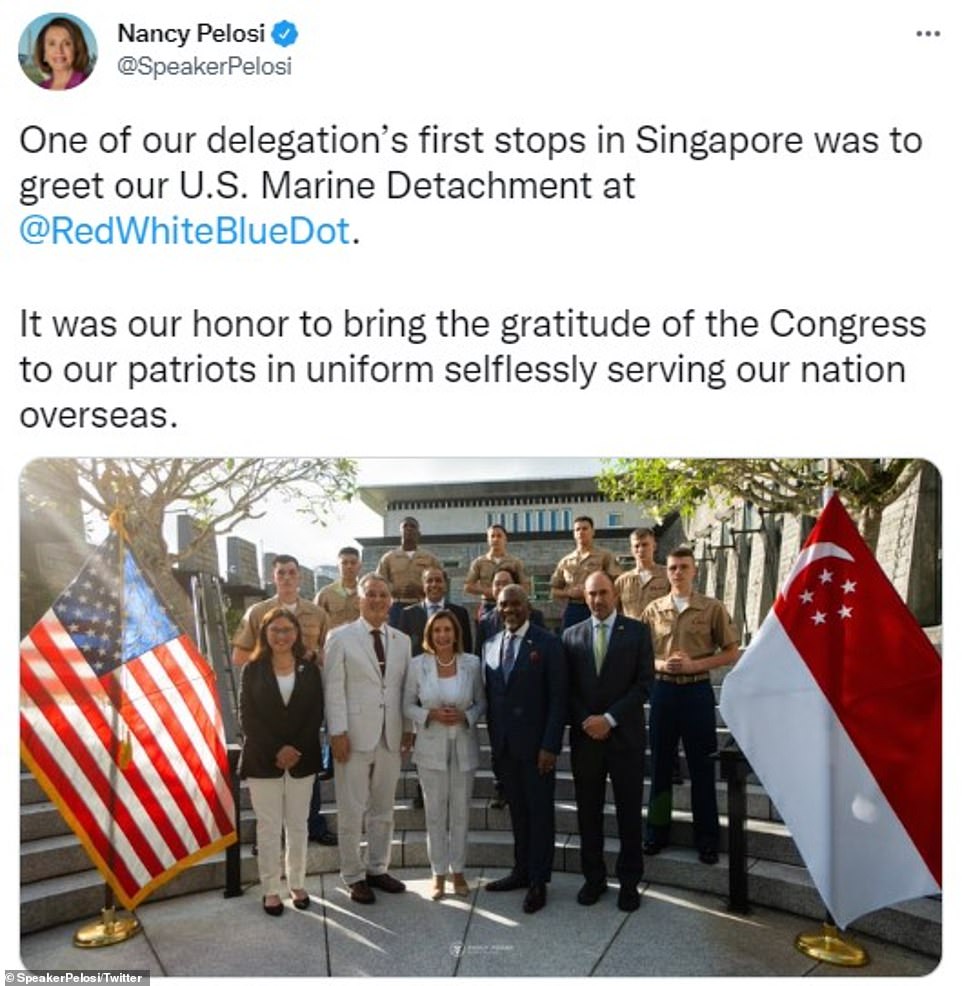 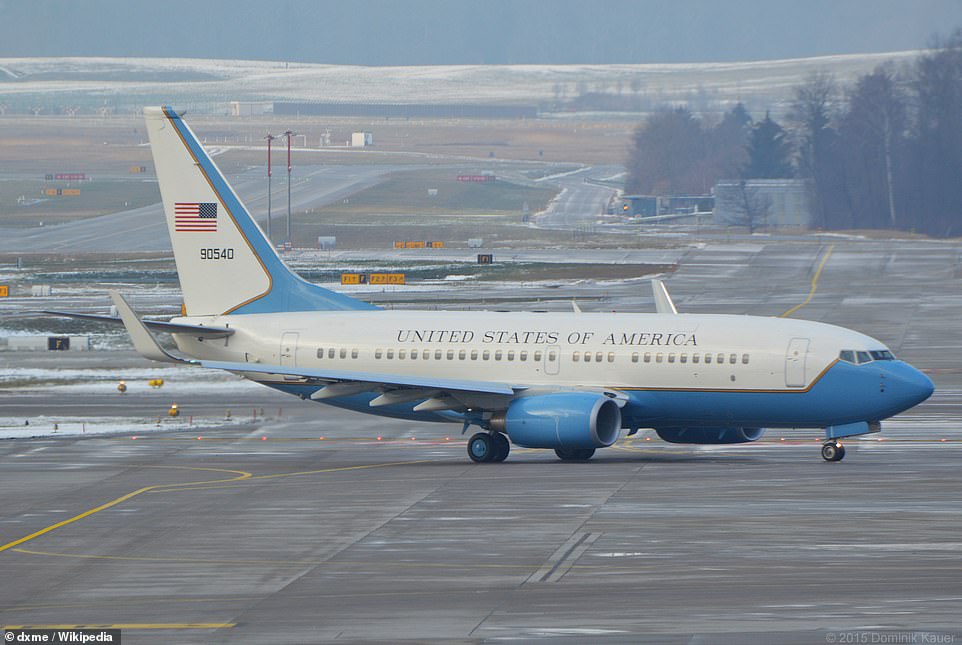 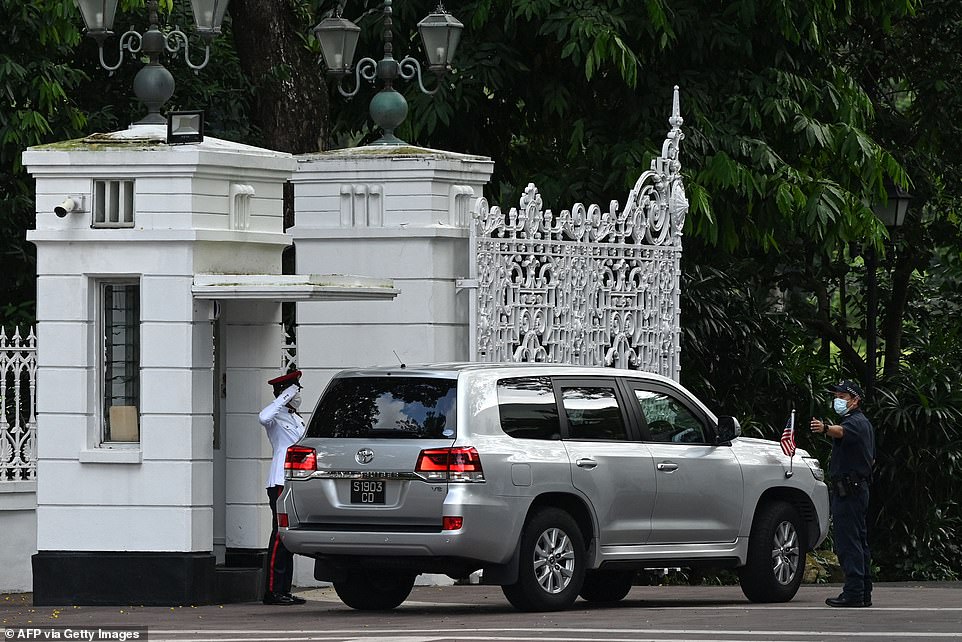 A car convoy is pictured upon US Speaker of the House Nancy Pelosi arrival at the Istana Presidential Palace in Singapore on August 1, 2022

Pelosi has also sparked anger from China in the past by meeting with pro-democracy dissidents and the Dalai Lama.

She also unfurled a banner in Tiananmen Square in 1991 which read ‘to those who died for democracy,’ in reference to the victims of the 1989 massacre.

In July, the speaker — who is number three in the line of presidential succession — told the media in a press conference: ‘It’s important for us to show support for Taiwan.’

The Global Times, China’s state-run tabloid, suggested that Pelosi might use ’emergency excuses like an aircraft fault or refuelling’ to land at a Taiwanese airport.

‘If she dares to stop in Taiwan, it will be the moment to ignite the powder keg of the situation in the Taiwan Straits,’ Hu Xijin, a former Global Times editor and now commentator, tweeted.

Beijing’s foreign ministry on Monday warned a visit would ‘seriously threaten the peace and stability’ of the Taiwan Strait if it goes ahead.

Bloomberg’s China editor John Liu said in an appearance on the network on Sunday: ‘I do think it’s worth mentioning that not mentioning if there will be a trip to Taiwan on her itinerary is different from saying she will not go to Taiwan.’

He added: ‘It is not off the table that there could be a surprise visit.’ 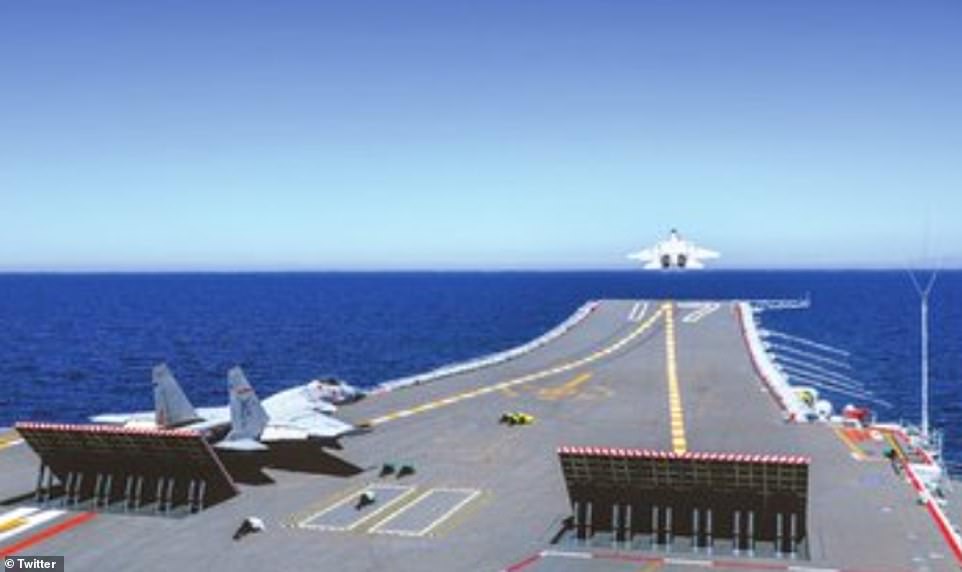 Chinese state media warned over the weekend that a military response was on the table if Pelosi went ahead with her visit. An official posted a tweet with photos of fighter jets taking off from a Chinese aircraft carrier 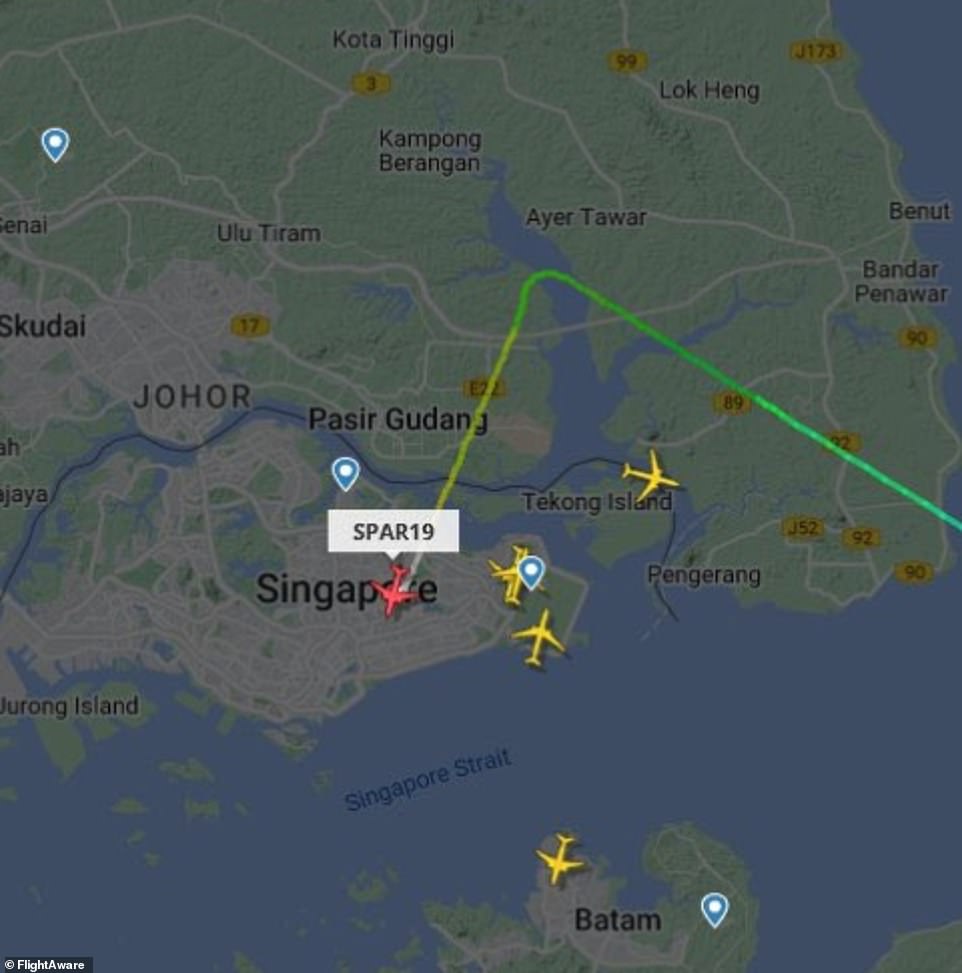 The speaker’s first stop was  in Hawaii, then on to Guam landing at Anderson Air Force Base before arriving in Singapore on Monday morning 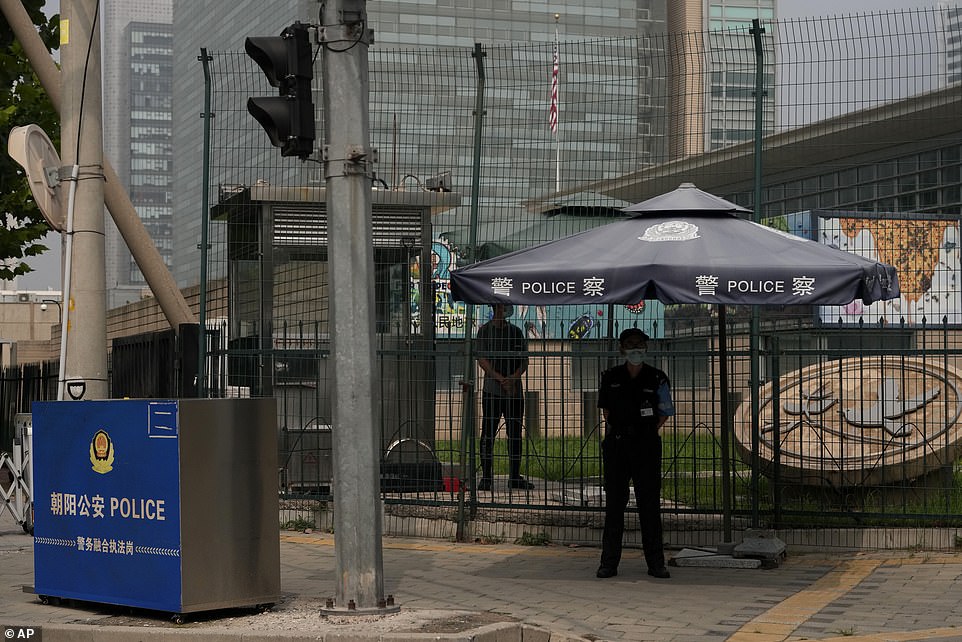 Police stand guard outside the U.S. Embassy in Beijing with US-Chinese tensions reaching a boiling point