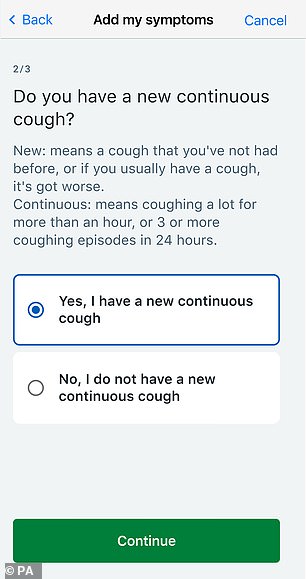 The NHS contact-tracing app considered vital to getting the UK out of coronavirus lockdown will be available for medical staff on the Isle of Wight from tomorrow.

Health Secretary Matt Hancock announced today that the first public trial would begin on the self-contained island of 140,000 people on Tuesday morning.

The app will work using bluetooth and alert people if they have been in close contact with someone who has fallen ill with COVID-19.

It is intended to stop further outbreaks of the virus and to prevent people from spreading the virus without realising they have it, as well as alerting authorities to local clusters of cases.

Mr Hancock said it was being used on the Isle of Wight because the fact that the population is small and cut off from the mainland meant the experiment could be carried out in ‘proper scientifically-controlled conditions’.

If the island trial is successful the Government plans to roll out the app to everyone across the UK as a crucial element of its ‘test, track and trace’ plan for keeping the country out of lockdown in future as it adapts to life with the virus.

Deputy chief medical officer, Professor Jonathan Van-Tam, today said: ‘It’s highly unlikely that the COVID-19 virus is going to go away… therefore, testing and contact tracing is going to have to become part of our daily lives for the future’.

But there are concerns that the data the NHS app collects might be vulnerable because officials have elected to store it on a central database on NHS servers.

Some other countries including Switzerland and Germany are using technology which stores all data on someone’s own phone and never submits it to authorities.

The CEO of NHSX, the digital arm of the health service, today said he could not confirm exactly who would have access to data collected by the NHS app, saying only that an organisation must have a valid public health reason to access it. He insisted that the app will never upload private, identifying information such as someone’s name or address.

The app has also failed the tests it must pass to be officially listed on the NHS app store, including cyber-security tests, the Health Service Journal reported.

It is reported to be below the normal standards the NHS requires to officially publish an app for mobile users, and has not lived up to expectations set on cyber-security, performance and its ‘clinical safety’. Exactly how it failed those measures is unclear. 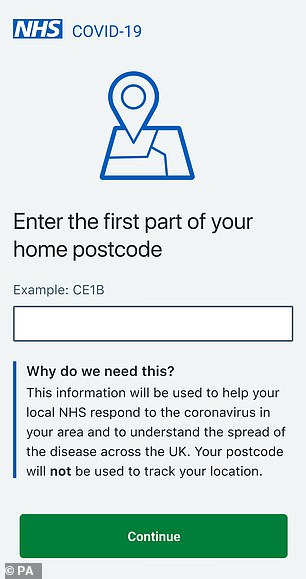 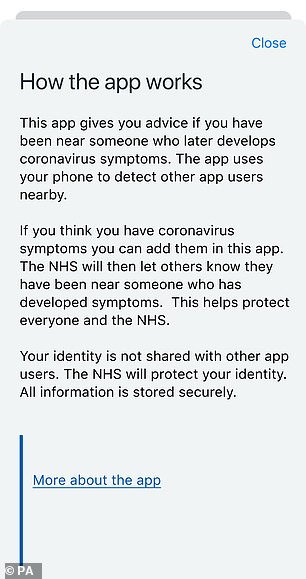 People will be asked to give the first half of their postcode so the NHS can collect vague, anonymised data – at town or village level – about where outbreaks of the coronavirus are appearing (pictured left). If someone has been close to a person who is later believed to be ill with COVID-19 they will receive an anonymous alert that they are at risk (right) 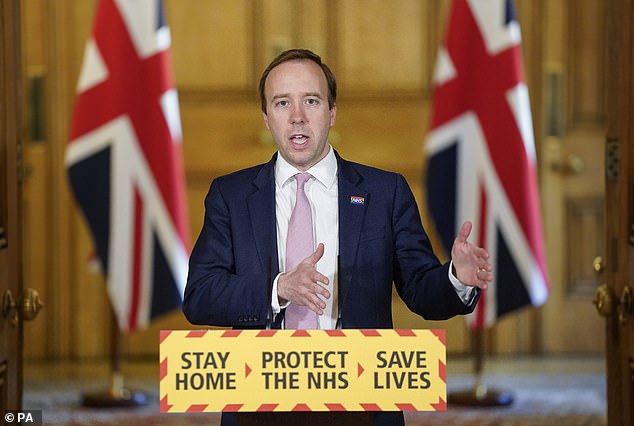 HOW WILL THE CORONAVIRUS CONTACT-TRACING APP WORK?

Test, track, and trace has become a key message in the fight against coronavirus and on Monday we learned more about the third element to this crucial approach.

Contact tracing is seen as one of several possible remedies to help the UK out of lockdown and an app trial is now ready to go, ahead of a full roll-out across the country.

A contact tracing app is one of the Government’s next big areas of focus, part of a wider contact tracing effort, as it tries to find ways to end lockdown while preventing a possible second wave of the virus.

The app uses Bluetooth to keep an anonymous log of everyone you come into close contact with. When they – or indeed yourself – present symptoms of Covid-19, tell the app and it will then alert anyone that has been in close proximity.

‘Something that is automated, that can work alongside traditional epidemiological contact tracing is potentially going to be of very great use to us,’ Professor Jonathan Van-Tam, deputy chief medical officer for England said.

Once installed and set up, the app will run in the background, keeping a log of everyone you pass.

Users will need to provide the first part of their postcode and give the app permission to use Bluetooth, as well as its ability to receive notifications.

Bluetooth will need to be kept on.

When a person is feeling unwell, they need to send a report, stating whether they are experiencing a high temperature and a continuous cough, and when these symptoms started.

If it appears they might have the virus, the person will be told to book a test.

The information is then uploaded, along with the last 28 days of proximity events, and fed into a complex at-risk algorithm which crunches data such as distance, duration and symptoms.

It will only notify those deemed at risk to isolate for 14 days and ask them monitor their symptoms.

If the person’s results come back as negative, those who came into contact with them will be told they are able to come out of isolation.

But should the result be positive, the person will be told to self-isolate for seven days, while those who came into contact with them continue self-isolating and book a test of their own if they have slightest symptom.

With the Isle of Wight trialling the app, does this mean lockdown will end there?

While those on the Isle of Wight will get to use the app first, this does not mean that lockdown will end there any sooner than the rest of the country.

‘For the Isle of Wight, all the same safeguards apply, they should still be following all the same social distancing advice,’ said Professor John Newton, director of health improvement for Public Health England.

‘It’s a staged development, it’s a staged implementation across the country – this is a really important stage, but to be absolutely clear there is no suggestion that we’re asking the Isle of Wight population to take any additional risks, they will be protected further by having access to testing, additional contact tracing and the use of the app.’

Will the contract tracing app be effective?

Contact tracing is really dependent on several crucial factors – though NHSX boss Matthew Gould has warned it will not be a ‘silver bullet’.

‘The app is exciting, but it’s also not a silver bullet or a standalone solution, it’s part of this wider strategy … it has to be seen as part of this strategy alongside the expansion of testing and human contact tracing,’ he said.

The app is also voluntary, so its effectiveness will rely on the amount of people actually using it.

‘Uptake is going to be important and so is the compliance with the app and regularly using it over a sustained period of time – and those are unknowns at the moment,’ Professor Van-Tam said.

‘The market research we’ve done, I think, indicates for the UK that there’s a fairly significant optimism that people will engage with something that is clearly about protecting the NHS.’

Will other symptoms be added?

Yes, this is likely with newer versions of the app in future as understanding about the virus develops overtime.