Home » World News » No-fly zones off the table, NATO says, as missiles rain down on Ukraine

No-fly zones off the table, NATO says, as missiles rain down on Ukraine

The latest developments came as Ukraine continued to come under heavy and sustained attack following a Russian invasion nine days ago. 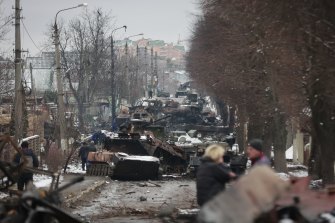 Ukraine, a former Soviet republic, wants to join the European Union and Western military alliance NATO, whose members are bound in its founding treaty to defend each other from invasion, but that prospect on Friday looked unlikely in the short term.

“We are not part of this conflict,” NATO Secretary-General Jens Stoltenberg told a news conference.

“We have a responsibility as NATO allies to prevent this war from escalating beyond Ukraine because that would be even more dangerous, more devastating and would cause even more human suffering.”

Thousands of people are believed to have been killed or wounded and more than 1 million refugees have fled Ukraine since February 24, when Russia’s President Vladimir Putin ordered the biggest attack on a European state since World War II.

Support for Ukraine so far has come mainly in the form of far-reaching sanctions on Russia, with EU members on Friday saying more financial punishment was yet to come. NATO members have sent weapons to Ukraine, but stopped short of military action.

In a video message earlier on Friday, Ukrainian Foreign Minister Dmytro Kuleba said NATO foreign ministers should not allow Putin to “turn Ukraine into Syria,” in reference to the devastating Russia-backed campaign against rebel cities in that country.

“Act now before it’s too late,” he said in the message posted on Twitter.

Stoltenberg said NATO understood Ukraine’s desperation, calling Russia’s war in Ukraine “horrific” and warning the worst was yet to come, with Russia rolling out more heavy arms. But he said a no-fly zone could only be enforced by sending NATO planes to shoot down Russian ones, adding that the risk of escalation would be too big.

Russia and NATO members the US, Britain and France are all nuclear powers.

“Allies agree we should not have NATO planes operating over Ukrainian airspace or NATO troops operating in Ukrainian territory,” Stoltenberg said.

US Secretary of State Antony Blinken said the alliance would defend “every inch” of NATO territory from attack. “Ours is a defensive alliance. We seek no conflict. But if conflict comes to us, we are ready,” Blinken said.

Instead of a military presence in Ukraine, EU countries – most of them also NATO members – said they were eyeing more economic sanctions to add to co-ordinated restrictions that have already targeted Russia’s financial system and elites.

“We will consider everything,” the bloc’s top diplomat Josep Borrell said, when asked about the possible suspension of the EU’s gas imports from Russia, which think tank Eurointelligence said amount to $US700 million daily even during the war.

“This is Putin’s war, and Putin has to stop this war,” Borrell said.

It was not immediately clear, however, when the EU would agree on measures given some countries’ heavy reliance on Russian energy supplies.

The 27-nation bloc is examining curbs on Russia’s influence and access to finance at the International Monetary Fund following its invasion of Ukraine, six officials told Reuters.

Ireland’s Foreign Minister Simon Coveney said no new sanctions would be announced on Friday, but that a fourth round could affect more Russian banks’ access to the SWIFT international transfer system, bar Russian ships from European ports and cut imports like steel, timber, aluminium or coal.

German Foreign Minister Annalena Baerbock said the bloc should close any loopholes that could allow Russia to circumvent sanctions.

Putin launched his “special military operation” to get rid of what he said was Ukraine’s fascist government and demilitarise the country. Zelensky says Moscow is trying to prevent a liberal democracy flourishing on Russia’s border.

“The picture looks very bleak and very dark in terms of Russia’s intentions … and so I think there is huge concern, and there is no point in sugar-coating it,” Coveney said.

Separately, Poland has arrested a Spanish national on suspicion of conducting intelligence activities for Russia, which could carry a 10-year prison sentence if he is found guilty, the Internal Security Agency (ABW). 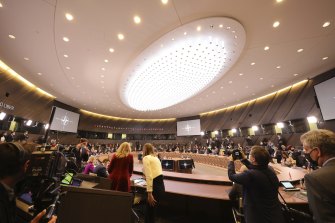 An extraordinary meeting of NATO foreign ministers in Brussels on Friday.Credit:AP

The man, identified as an agent of Russia’s military intelligence agency GRU, was detained in Przemysl – near Poland’s border with Ukraine on Sunday night.

Both outlets have recognised Gonzalez as having worked with them.

ABW claimed the man carried out operations to benefit Russia and had travelled in Europe and elsewhere under cover of being a journalist.

News of the arrest came after a crackdown in Moscow on journalists and free speech more generally. A new law on Friday made it illegal to spread what the Kremlin said was “fake” news about the Russian army, but the legislation essentially covers all forms of protest, as well as independent journalism.

Russia’s Novaya Gazeta newspaper, whose editor Dmitry Muratov was a co-winner of last year’s Nobel Peace Prize, said would remove material on Russia’s military actions in Ukraine from its website because of censorship.

The newspaper said it would continue to report on the consequences that Russia is facing, including a deepening economic crisis and the persecution of dissidents.

“Military censorship in Russia has quickly moved into a new phase: from the threat of blocking and closing publications (almost fully implemented) it has moved to the threat of criminal prosecution of both journalists and citizens who spread information about military hostilities that is different from the press releases of the Ministry of Defence,” the paper said in a message to readers.

“There is no doubt that this threat will be realised.”

The newspaper said it could not risk the freedom of its staff but also could not ignore its readers’ desire for it to continue working, even under military censorship.

It said it was therefore removing materials “on this topic” from its website and social networks.

Muratov, the editor, dedicated his Nobel prize last year to six of the newspaper’s journalists who had been murdered for their work.

Novaya Gazeta’s announcement followed the closure this week of radio station Ekho Moskvy, another of the few remaining liberal voices in the Russian media.

The BBC also temporarily suspended the work of its journalists in Russia in response to a new Russian law that essentially criminalises independent journalism. The British national broadcaster said its news operation for Russia will continue to operate from outside the country.

“Our journalists in Ukraine and around the world will continue to report on the invasion of Ukraine,” BBC Director-General Tim Davie said in a statement. The new law “leaves us no other option than to temporarily suspend the work of all BBC News journalists and their support staff within the Russian Federation while we assess the full implications of this unwelcome development.

Get a note directly from our foreign correspondents on what’s making headlines around the world. Sign up for the weekly What in the World newsletter here.