Home » World News » ‘Not a scrap of vegetation’: The decades-long fight to bring Phillip Island back from the brink

‘Not a scrap of vegetation’: The decades-long fight to bring Phillip Island back from the brink

It was a fine place for a spot of sport. For 200 years, uninhabited Phillip Island was overrun by pigs, goats and rabbits introduced by British officers overseeing the penal settlement at Norfolk Island, seven kilometres of rough seas away.

Known as the Uluru of the Pacific for its steep valleys and slopes of red rock bare of anything but hip-breaking scree, its feral animal invaders had razed everything on Phillip.

They destroyed the habitat of everything from tiny snails to a giant bird-eating centipede unique to the island.

They ate the reptiles, including geckos and skinks. And they felled plants and trees, robbing the island of places for seabirds like the Kermadec petrel to roost or nest.

“There was not a scrap of vegetation left. All the topsoil washed away, there was very little for the plants to cling on to,” says Mark Scott, a local guide and citizen scientist who has been working to propagate some plants – such as the island’s hibiscus – that were down to the last specimen.

“It is an amazing place, a myriad of colours, reds, oranges,” he says.

To Norfolk Islanders, who are descended from Polynesians, the island is a spiritual home. Local Dave Biggs says: “It is as sacred to us as Uluru is to Indigenous Australians.” 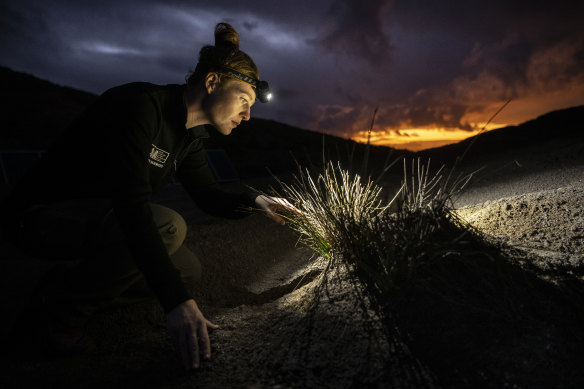 Islands like Norfolk and Phillip have large numbers of species unique to them, says Nigel Greenup, Parks Australia’s manager of the Norfolk Island National Park which includes Phillip.

But they are equally fragile because the species that live on these islands are geographically restricted, and have limited capacity to form insurance populations elsewhere.

“They are really prisoners in paradise in that respect,” Greenup says. His staff and volunteers have been working to propagate plants that were down to the last one or two on both islands, as well as protecting local animals at risk.

Last month Scott escorted scientists to Phillip Island as part of the first comprehensive expedition by the Australian Museum to develop an accurate picture of the state of Norfolk’s endemic flora and fauna.

Not sighted since 1982, it was thought to have gone extinct, said Dr Isabel Hyman, a scientific officer who visited Phillip with her colleague, Dr Frank Kohler, a taxonomist specialising in non-marine snails.

Of all animals, snails are the most at risk. They have had the most recorded extinctions since the 1500s, and Pacific island snails account for most of these.

Mathewsoconcha grayi, which was thought to be extinct until a small population was found on Phillip Island.Credit:Frank Kohler, Australian Museum

Hyman had been “pretty sure they had not survived” because they were last sighted at the worst of the deforestation, a few years before the last of the feral animals were shot or poisoned in 1988. When she and Kohler visited Phillip in 2020, they found only a few old and worn shells.

Now extinct on Norfolk, M. grayi would’ve been hard to find even in the best of times. It is nocturnal, hiding in the leaf litter during the day when scientists searched for it.

It is tiny, only 16 millimetres across its shell, and its habitat is small. (On the upside, it does travel at a snail’s pace.)

The first tip it could have survived was when an entomologist “found freshly dead snail shells”, says Hyman. “We all raced over, and the search was on. There were lots of fresh shells. Mark found the first live specimen, and then we found several more – about 12 live specimens in total, and many shells. They were in the flax plants all through that patch.”

It was the only colony found that day, but enough to confirm that the species is alive and well, she says.

But why should we care? The answer is biodiversity. Hyman says most publicity about the preservation of biodiversity focuses on charismatic and cuddly animals.

“These snails are like little cogs in the world,” she adds. “It is pretty difficult for one [species] to survive independently of the others. And the more you lose, the more things fall apart and the ecosystem stops functioning. It is inevitable.”

These snails aren’t the invasive species dining out on basil and clivia in backyard gardens that most people know. Those are introduced species, and native snails are confined to undisturbed native vegetation, she says.

M. grayi are native to Australia, and are a source of food for the island’s geckos, skinks, and possibly centipedes. The snails also break down and recycle nutrients from decaying plants.

Professor Kris Helgen, the chief scientist of the Australian Museum, says on an island like Phillip “so much of the fauna is the really small stuff, the insects and spiders and the centipedes. That’s really what makes the forests and habitat tick.”

The expedition had already turned up new species of spiders, and very likely will find new insect species too.

A moonscape 40 years ago, the island has become a haven for insects and lizards, protecting them from the rats and other animals that prey on them on neighbouring Norfolk.

The air is now full of seabirds swooping and squawking. Nests were full of eggs with chicks about to hatch.

The carnivorous centipede were also found to be coming back in greater numbers, the scientists found.

In an article in The Conversation last year, scientists from Monash University also detailed how these centipedes (Cormocephalus coynei) devoured up to 8700 seabird chicks a year. Hunting at night, they inject chicks with venom.

It was a bit like a scene from a sci-fi film, wrote ecologist Luke Halpin from Monash University, working with Rohan Clarke and biologist Rowan Mott on the island, after they recorded a centipede eating a chick. Black-winged petrels (Pterodroma nigripennis) – birds that burrow on the ground – are common prey for the centipede.

By hunting vertebrates, the centipedes trap nutrients brought in from the ocean and distribute them around the island.

The centipedes had taken the place of predatory mammals, which are absent from the island, the scientists from Monash wrote.

During the expedition in late October to early November, New Zealand herpetologist Rebecca Bray found a dead gecko with visible bite marks from a centipede.

Phillip Island has no venomous spiders or snakes, so Bray and other scientists could lift logs and man-made rubbish with abandon in their search for reptiles and insects.

Within minutes of turning over their first piece of rubbish Bray and Dane Francis Trembath, a herpetologist from the Australian Museum, found gecko eggs, with live geckos and skinks scrambling for cover.

Later that night by torchlight, Bray – the collection manager at the Auckland War Memorial Museum – found geckos feeding on flax flowers, and evidence that they ate pine sap and the succulent pigface.

“The specimens act as a biological library in time and space that let us know exactly where and when a species was and who collected.”

Julie Power and photographer Wolter Peeters’ accommodation and flights were funded by the Australian Museum.

Get to the heart of what’s happening with climate change and the environment. Our fortnightly Environment newsletter brings you the news, the issues and the solutions. Sign up here.