Home » World News » Out of the country, female Afghan robotics team hopes to help others

Out of the country, female Afghan robotics team hopes to help others

Mexico City: An all-woman Afghan robotics team known as the “Afghan Dreamers” are now safe in Mexico, and say they want to help others who remain in their country after the Taliban takeover.

“We are concerned with what will happen to our home,” said Saghar, who asked that her last name not be used to avoid endangering her family members who remain in Afghanistan. 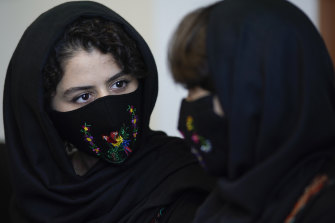 Kawsar, left, a member of the Afghan all-girls robotics team, speaks during an interview in Mexico City.Credit:AP

The four women, accompanied by a sister and another man, arrived this week after travelling through six countries to reach Mexico. They fled Afghanistan after the takeover of the country earlier this month by the Taliban, who forbade women working or going to school after a certain age when it last ran the country.

They said in an interview that they intended to keep working, and save those who were left behind.

“The reason that we left was that we didn’t want our history to be ended by Taliban,” said Saghar. “We wanted to continue the path that we started to continue to go for our achievements and to go for having our dreams through reality. So that’s why we decided to leave Afghanistan and go for somewhere safe.”

Saghar, 17, who along with her teammates has competed in robotics competitions and won an award in 2017. The young women — who have embroidered team uniforms — had won international attention, and had recently taken on the challenge of constructing ventilators out of car parts for COVID-19 patients.

But their very success made it dangerous for them in Afghanistan. 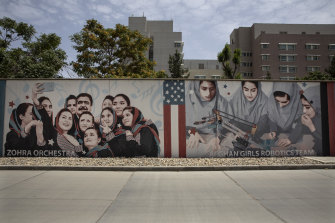 A mural along the walls of the US embassy in Kabul, Afghanistan, features the women’s robotic team (right).Credit:Getty Images

“The situation outside of our homes were really high, risky, and even especially for our team who have been, you know, has a high profile, status and achievement and which is not something that is in favour of the Taliban regime,” said Saghar.

The young women had decided to flee a month or two before their western city of Herat fell to the Taliban in early August as the tension had become unbearable.

“We were so stressed out we couldn’t eat and sleep well for many days,” said Saghar. “And we were like, even crying many times and sitting together and crying and thinking about what a solution can we have.” 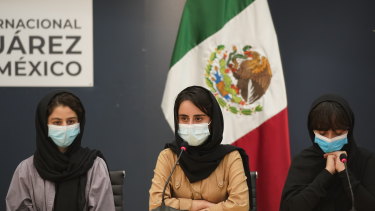 Several of the original members of the Afghan all-girls robotics team, who have received threats from the Taliban, attend a press conference after arriving at the Benito Juarez International Airport in Mexico City.Credit:AP

It is unclear how many more Afghans will be able to get out.

Mexico welcomed another group of 124 Afghan media workers and their families on Wednesday after the group fled their country because of the Taliban takeover. The Foreign Relations Department said the Afghans had worked for The New York Times and “various media outlets” and had requested humanitarian visas because of the Taliban’s hostility towards journalists.

Mexico’s offer of safe haven to Afghan journalists is a sharp contrast in a country that is unable to protect its own reporters.

But Mexico said the Afghan Dreamers would be allowed to choose where they wanted to go, which country they chose to seek asylum in, and what they wanted to do.

“Mexico is not expecting them to stay or go, but rather that they decide what they want to do,” said Assistant Foreign Relations Secretary Martha Delgado.

For now, the young women are thinking about everything they had to leave behind, and all the other Afghans condemned to live under the Taliban’s harsh rules.

“It was really quite hard when we decided to leave Afghanistan because we left our beloved ones over there, our home, our memories, and everything over there,” Saghar said. “We, you know, saved ourselves from that situation, we had calls from the children and our families saying that please save us the same as you did for yourself.”

“We hope that we find a way to help them as well,” she said.