Sickening new details have emerged from an explosive federal lawsuit that was filed on Monday by three female deputies in Texas accusing their male colleagues of sexually assaulting them, including how one of the alleged victims was sent to a massage parlor to be raped by a known sex offender as part of a sting operation.

Perhaps some of the most shocking allegations detailed in the complaint are related to McKinney, a young deputy with no undercover training who is described in the lawsuit as ‘the sacrificial lamb.’

According to the court filing obtained by DailyMail.com, in August 2019, McKinney was sent undercover to a massage parlor to be raped by a known sexual offender, who had previously sexually assaulted Constable Rosen’s own chief of staff, before she could give a signal to her colleagues to move in and arrest the suspect.

‘McKinney was ordered to make an appointment at the establishment with the known sexual deviant,’ the complaint reads. ‘At said appointment she was, unsurprisingly, penetrated in both her vagina and anus by the same individual who had only days before assaulted the [chief of staff]. 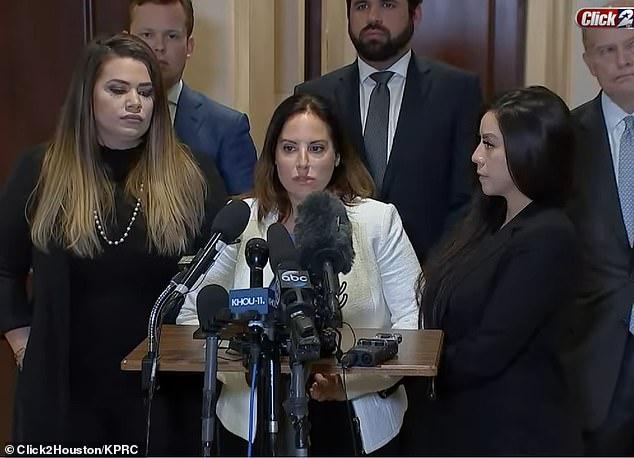 Lisa Gomez, Marissa Sanchez, Felecia Mckinney and Jacqueline Aluotto filed the lawsuit together. Three of the women appeared at a press conference on Monday. Only Alutto spoke. All four are named on the docket 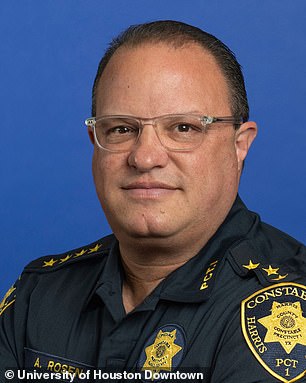 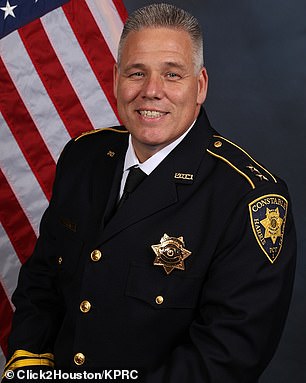 ‘McKinney was forced to allow this to happen as she was ordered to do by her superiors,’ the lawsuit alleges, noting that the constable office’s allowed the deputy to be led to the alleged rapist ‘like a lamb to the slaughter,’ even though there was already ‘sufficient evidence to make an arrest prior to exposing McKinney to this trauma.’

After the raid, McKinney was ‘all but ignored’ by her superiors and had to drive herself to a sexual assault exam.

But those operations turned more into parties where officers drank heavily and the female deputies, who were given little to no training in undercover work, were fondled and kissed by their supervisory officer, or were told to give lap dances to other male deputies.

‘[Y]oung female deputies [who] were handpicked for “undercover operations” under the guise of legitimate police work were molested and traumatized by their intoxicated male commanding officers for their own sexual gratification,’ the lawsuit alleges. ‘What began as an idea for “bachelor party” prostitution stings soon grew into a booze-fueled playground for sexual exploitation in which young, untrained deputies were subject to disgusting abuse.’

The lawsuit accuses the defendants of sexual harassment, sexual battery, violation of equal protection and retaliation.

Cordt Akers, one of the attorneys for the women, called the allegations ‘some of the most unspeakable sexual police misconduct that any of us have ever seen.’

According to the court documents, Liz Gomez, the lead plaintiff in the federal lawsuit, was hand-picked by Gore for undercover operations, despite her lack of training.

The deputy claims that she was ‘continuously subjected to sexual harassment, unwarranted touching, unwanted kissing, molestation, and sexual ridicule.’

The complaint alleges that Gore instructed Gomez to purchase skimpy outfits to be worn during the ‘bachelor party’ stings, and send photos of the clothing to him while shopping.

Gore also allegedly took Gomez to an adult store with him to purchase sex toys as props with county funds.

After that shopping trip, Gore allegedly told Gomez that she was not allowed to work with any other male deputy because she was ‘his.’

The complaint claims that during the undercover ‘bachelor party’ stings, female deputies like Gomez were ordered to allow Chief Gore to lie on top of them and fondle their breasts and bodies to ‘maintain cover.’

‘They were never warned, however, that during this conduct Chief Gore would be wearing only boxer shorts, fully aroused, drunk, kissing and licking their bodies, and giddy after every sting,’ according to the lawsuit.

‘Gore would tell the female deputies to “drink up,” “get loose,” and that it was time to “start the party,”’ according to the lawsuit.

After her first two undercover operations, Gomez asked to be removed from the team. ‘After ridicule and denigration, her request was reluctantly granted, and she was subjected to continuous harassment from her superiors for “not having what it takes,”‘ the lawsuit states.

Gomez’s replacement on the team, Sanchez, was also handpicked by Gore to be ‘his girl,’ despite being a rookie with no training in undercover work, the lawsuit alleges.

Like her predecessor, Sanchez was also instructed to dress in revealing clothing, and she was told that she may need to get naked and give her male colleagues a lap dance during a sting operation.

‘As the first suspects arrived and the sting began, Chief Gore immediately took off Sanchez’s bra without warning and for no real reason. He then threw her bra across the room,’ the complaint states. …’While her breasts and naked body were exposed due to Chief Gore’s actions, he would continuously laugh, even after the undercover operation ended.’

Similarly to Gomez, Sanchez claimed that her drunken boss would lie on top or under her, ‘where she could feel his arousal,’ and would begin kissing and licking and neck and chest.

When Sanchez tried to complain to Rosen about Gore’s conduct, she was transferred out of the unit to ‘less prestigious duties.’

The lawsuit alleges Rosen and the Harris County District Attorney´s Office were told about what was happening by a victims´ advocate working with the human trafficking unit, but they took no action.

‘We need to end corruption and (complicity) in people in power,’ Jacquelyn Aluotto, the victims´ advocate and who filed the lawsuit along with the deputies, said at a news conference.

Aluotto alleges she was essentially fired as her hours were cut to zero after she told authorities what happened to the deputies.

‘In this matter, our sex crimes division quickly asked Constable Pct. 1 Internal Affairs to investigate whether there was evidence of a crime and Ms. Aluotto has represented she contacted the Texas Rangers. Nothing has been presented to prosecutors by either agency,’ said Dane Schiller, a spokesman for the Harris County District Attorney´s Office. 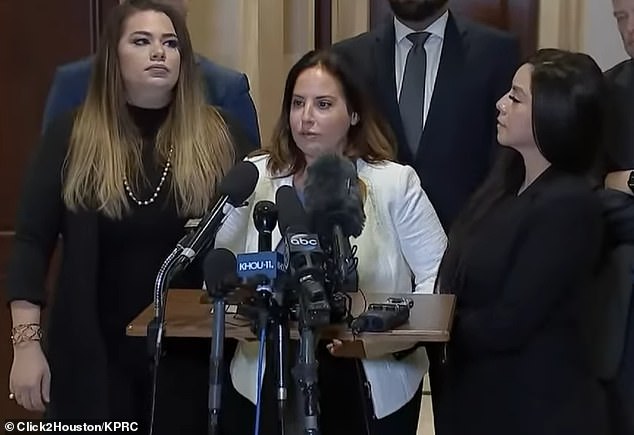 The women say they were meant to all be putting an end to sex trafficking but instead, the male cops used the ‘stings’ to get drunk and fondle them

Constables and their deputies are licensed peace officers who have the same powers as regular police officers but also have the added responsibility of civil law enforcement. Rosen´s office covers parts of central and north Houston.

The lawsuit alleges that to make human trafficking arrests, the constable´s office set up ‘bachelor party stings’ in which the female deputies would pose as prostitutes in order to arrest sex workers and lead authorities to their handlers.

But the undercover operations became ‘sexually-charged’ stings and a way for an assistant chief and others to fondle, kiss and ridicule the female deputies, according to the lawsuit.

Aluotto learned the female deputies were being victimized and that the human trafficking unit was not focused on solving cases and helping victims but on organizing the bachelor party stings, according to the lawsuit.

Aluotto said she and the deputies have already received threats to their careers.

‘We will not be silenced. We will continue to advocate and we will fight for our rights and others,’ she said.