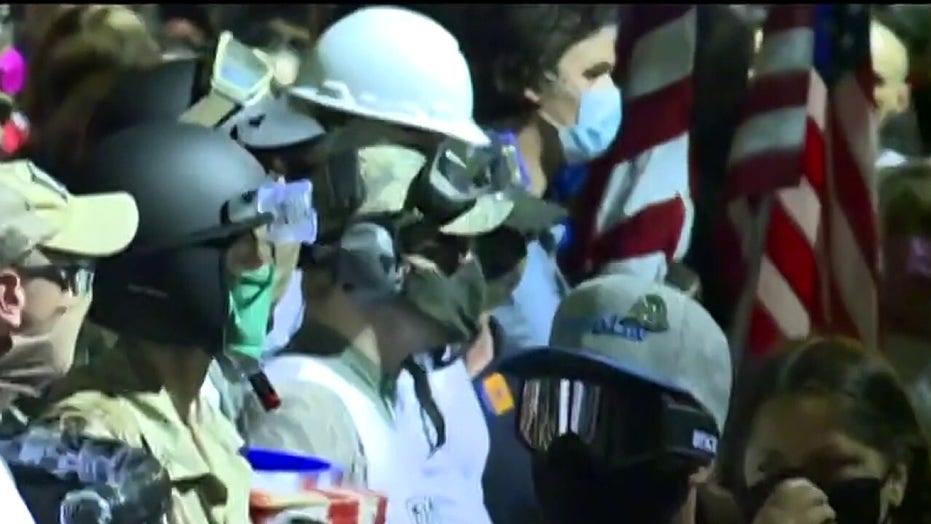 More than 150 rounds were fired and one woman was shot in Portland on Friday night while protesters on Saturday – some of whom appeared to impersonate press – threw glass bottles and shined lasers at city police officers sent to quell the nighttime unrest witnessed for more than two months straight.

Saturday marked the third night of federal and state law enforcement cooperation in Portland, as the Department of Homeland Security continues to weigh plans to withdraw from the liberal Oregon city. It was the 64th straight day of violent demonstrations and rioting in Portland.

A shooting rang out about 11:08 p.m. Friday outside an apartment building near the 600 Block of NE 87th Avenue. The Portland Police Bureau said in an update Saturday that more than 150 rounds were fired and bullets struck at least eight occupied apartments and seven vehicles. One round struck a woman in the arm, and responding officers applied a tourniquet before she was transported to the hospital by ambulance with injuries that were not life-threatening. 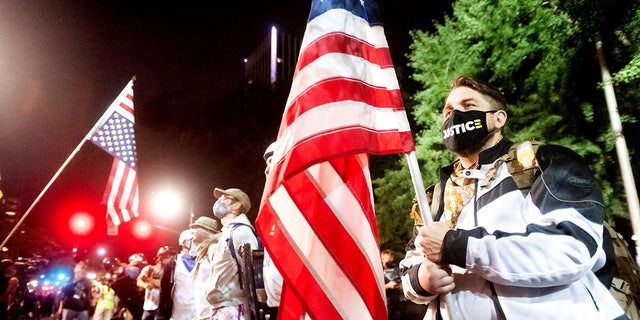 “This is America and it’s a war zone with 150 shots in an apartment complex close to a Christian university. How can we explain that?” Aragon Marks, who lives at the building, told Fox 12 Oregon.

Though it was not immediately clear whether the shooting was linked to demonstrations seen in Portland nearly every night since the death of George Floyd in Minneapolis at the end of May, another resident, Kemoh Sulimani, connected the violence to the city’s efforts to defund police.

“They had a gang violence task force that are no longer funded, which is unfortunate because as soon as that defunding happened all of this really peaked up,” Sulimani told Fox 12.

ACTING DHS SECRETARY WOLF ON PORTLAND: 'DHS REMAINS IN PORTLAND UNTIL WE CAN BE ASSURED THAT COURTHOUSE IS SAFE AND SECURE'

Hundreds gathered outside the Mark O. Hatfield U. S. Federal Courthouse around 8:50 p.m. Saturday, blocking traffic and listening to speeches. A group of about two hundred marched from Laurelhurst Park to the Penumbra Kelly Building, also blocking traffic lanes.

People “shined bright lights at Portland police officers standing outside the building, directed lasers at the officers, and eventually began throwing glass bottles at them,” the Portland Police Bureau said in a summary of events. One person in the crowd threw a glass jar or bottle filled with paint, striking a Portland police officer in the head. The officer was not seriously injured.

As people continued to throw glass bottles and other objects, Portland police declared that the assembly blocking East Burnside was unlawful and directed people to disperse. Police said “people with ‘press’ written on their outer garments repeatedly threw objects at officers.” Two people were arrested.

As crowds circled the Penumbra Kelly Building, the city’s police department said “again people with ‘press’ written on their outer garments were among those throwing objects at police.” The Portland Police Bureau did not use CS gas to disperse crowds. 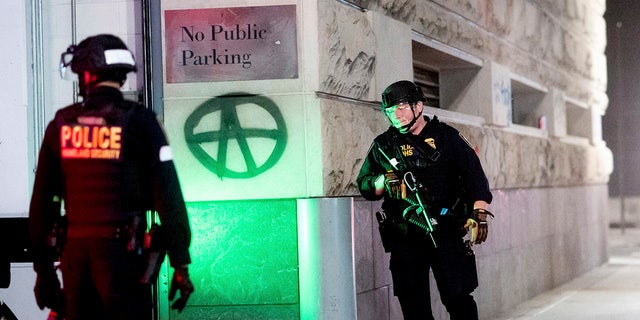 Back downtown, just after midnight, the majority of the crowd that had gathered outside the federal courthouse embarked on a march through downtown and the Pearl District. Police said the crowd dissipated over the next two hours to just about 100 protesters and “The march was peaceful and Portland police did not interact with the crowd of people downtown.”

PORTLAND PROTESTER OUTED BY HIS OWN GRANDMOTHER AFTER SHE IDENTIFIED HIM AS ALLEGED 'BOMBER' SEEN IN VIDEOS: REPORTS

The Department of Homeland Security and Oregon’s Democratic Gov. Kate Brown came to an agreement on Wednesday to send Oregon State Police into Portland to assist federal officers in protecting the Hatfield Courthouse.

DHS said in its latest statement on Saturday that “while the violence is abating,” federal law enforcement’s enhanced presence on the ground will remain for the time being until they determine “the courthouse and other federal property are safe.”

“After weeks of rioting and nightly attacks on federal officers and property, activity in the vicinity of the Mark O. Hatfield Federal Courthouse continues in an overall trend of diminishing violence as a result of the increased cooperation between state and federal law enforcement,” DHS said. “In stark contrast to the intense weekend violence in Portland over the past two months, protests around federal property remained generally peaceful with only minor incidents of malicious activity.”

The DHS came under fire on Thursday for compiling “intelligence reports” on American journalists covering demonstrations in Portland. The reports on a New York Times reporter and an editor-in-chief for the blog Lawfare noted they had published leaked, unclassified documents about DHS operations in Portland, the Washington Post first reported.

END_OF_DOCUMENT_TOKEN_TO_BE_REPLACED

Fox Business Flash top headlines for August 10 Fox Business Flash top headlines are here. Check out what’s clicking on FoxBusiness.com. Royal Caribbean posted a $1.6 billion loss for the second quarter after the coronavirus pandemic forced the company to temporarily suspend operations around the globe. Continue Reading Below On March 13, the company ended all global voyages. Since then the […]

END_OF_DOCUMENT_TOKEN_TO_BE_REPLACED
This website uses cookies to improve your user experience and to provide you with advertisements that are relevant to your interests. By continuing to browse the site you are agreeing to our use of cookies.Ok