A PRICELESS Picasso stolen from the Greek National Gallery has been discovered hidden in a ditch nine years later.

'Head of a Woman', gifted by Pablo Picasso to Greece in 1949, was stolen in an audacious heist by a builder, allege cops. 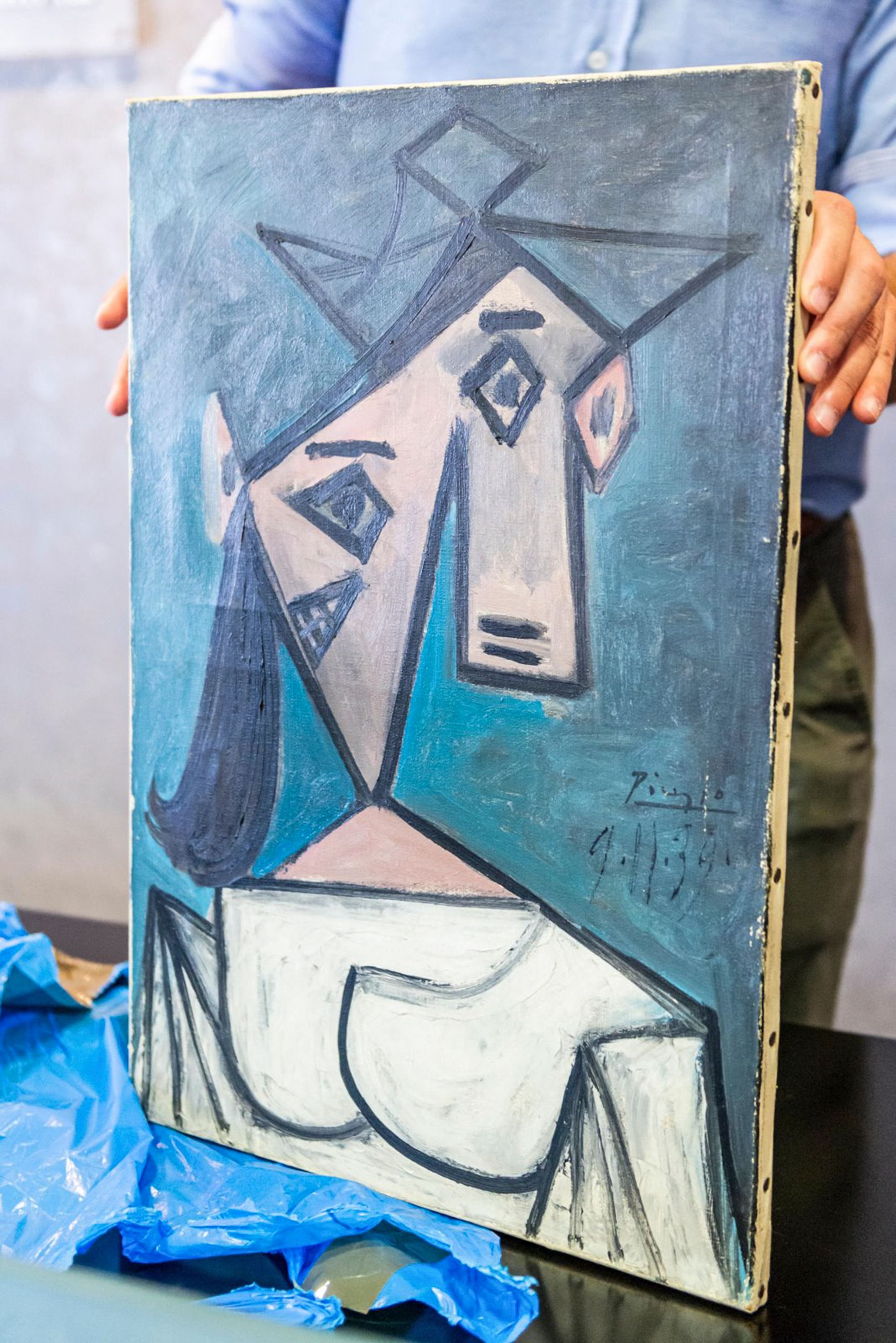 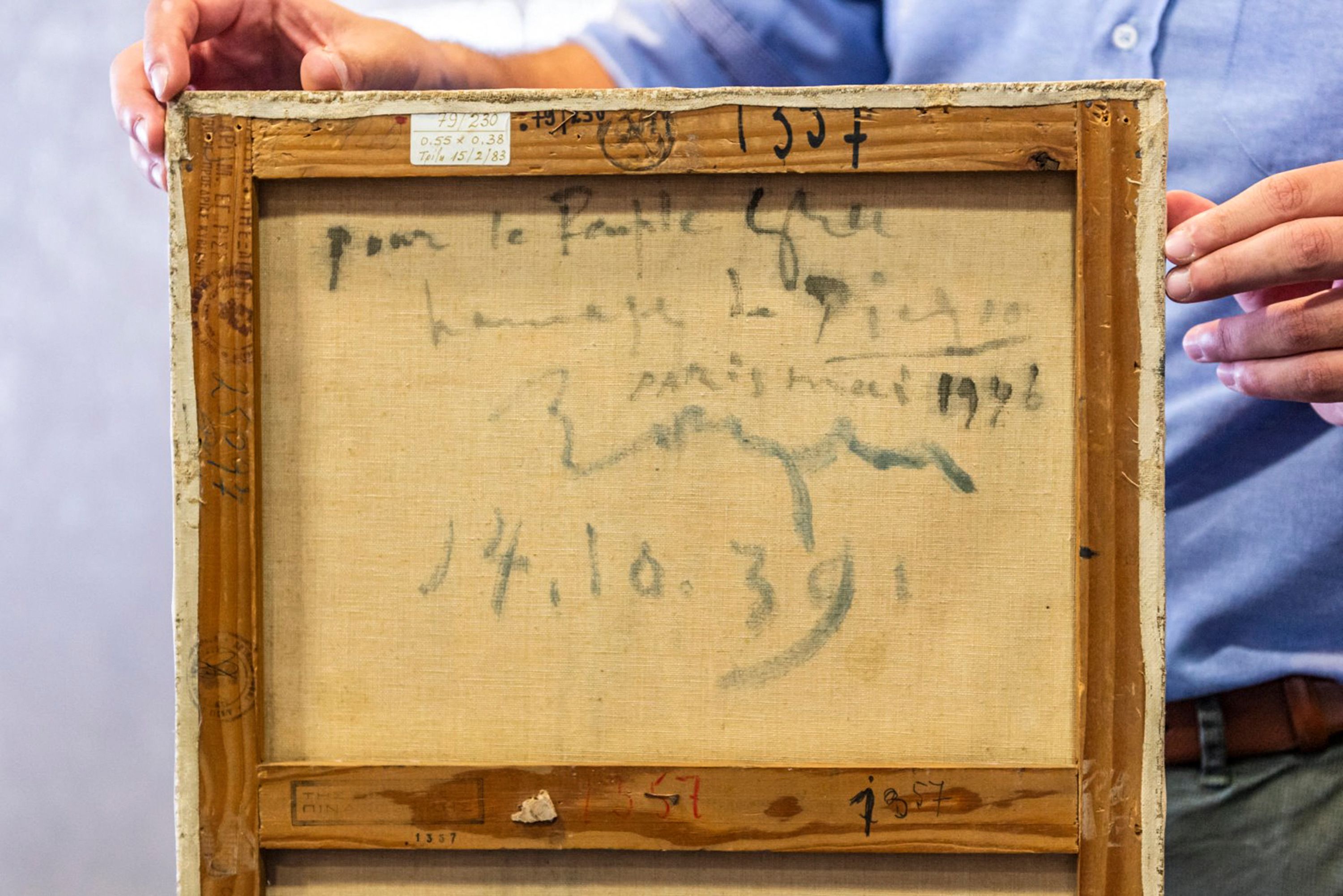 The builder, 49, led police to a forest outside Athens where he had hidden them, the Citizens' Protection Ministry said on Tuesday.

It was recovered in Keratea, a rural area some 45km (28 miles) southeast of Athens, say officials.

Footage handed out by cops from the hiding site showed one of the paintings sealed in a package under bushes.

Greece said that it had recovered the Picasso painting personally donated by the Spanish master to the Greek people, almost a decade after it was pinched.

The artist had given the cubist painting to the Greek state in recognition of the country's resistance to Nazi Germany during a painful 1941-44 occupation.

Picasso's art had been stolen along with two other artworks in an audacious heist at the National Gallery.

The builder who allegedly confessed to stealing the artworks in 2012 has now been arrested, say cops.

The man said he had initially hidden them in a home, but had recently stashed them in thick vegetation at a local gorge. 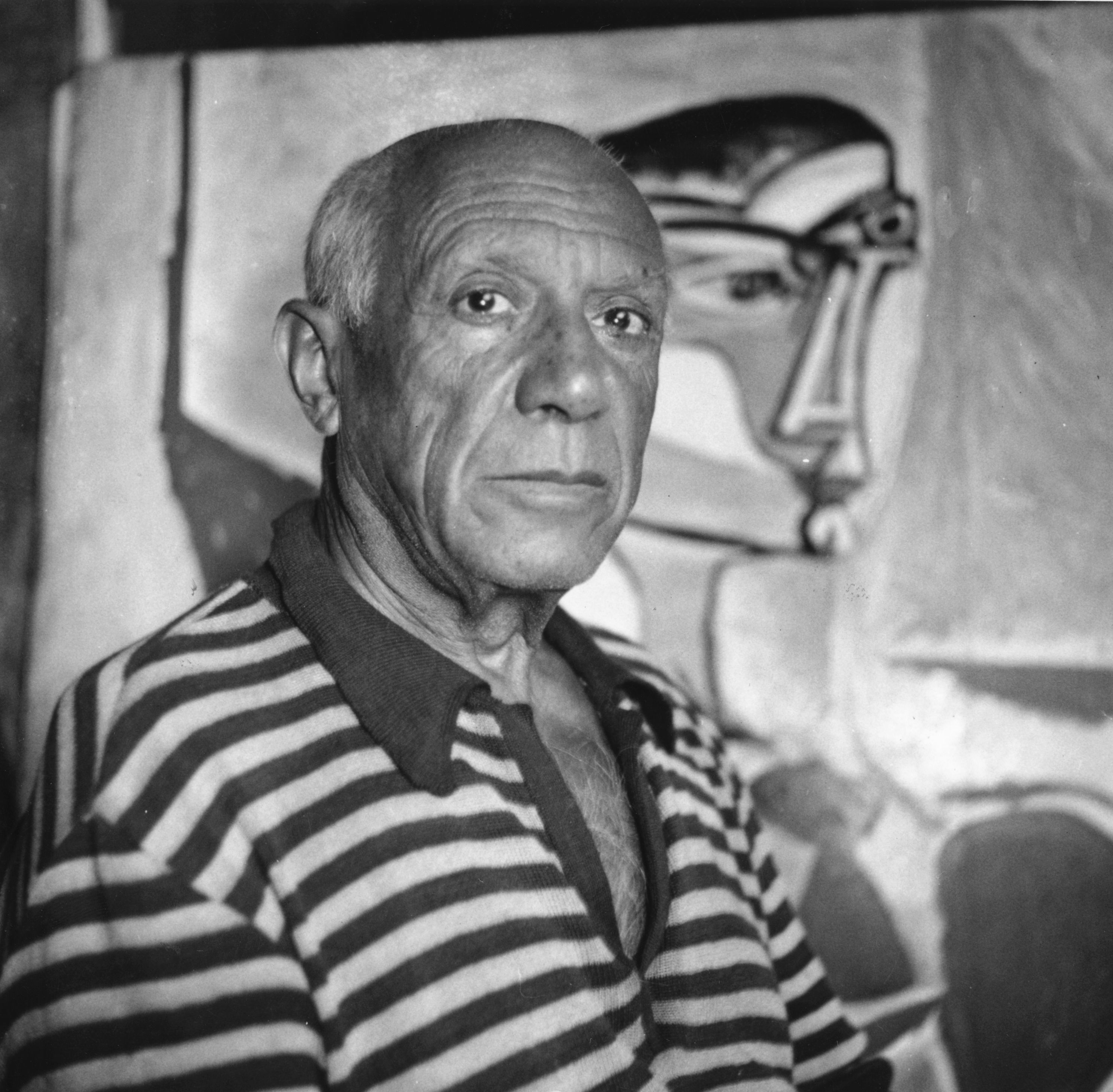 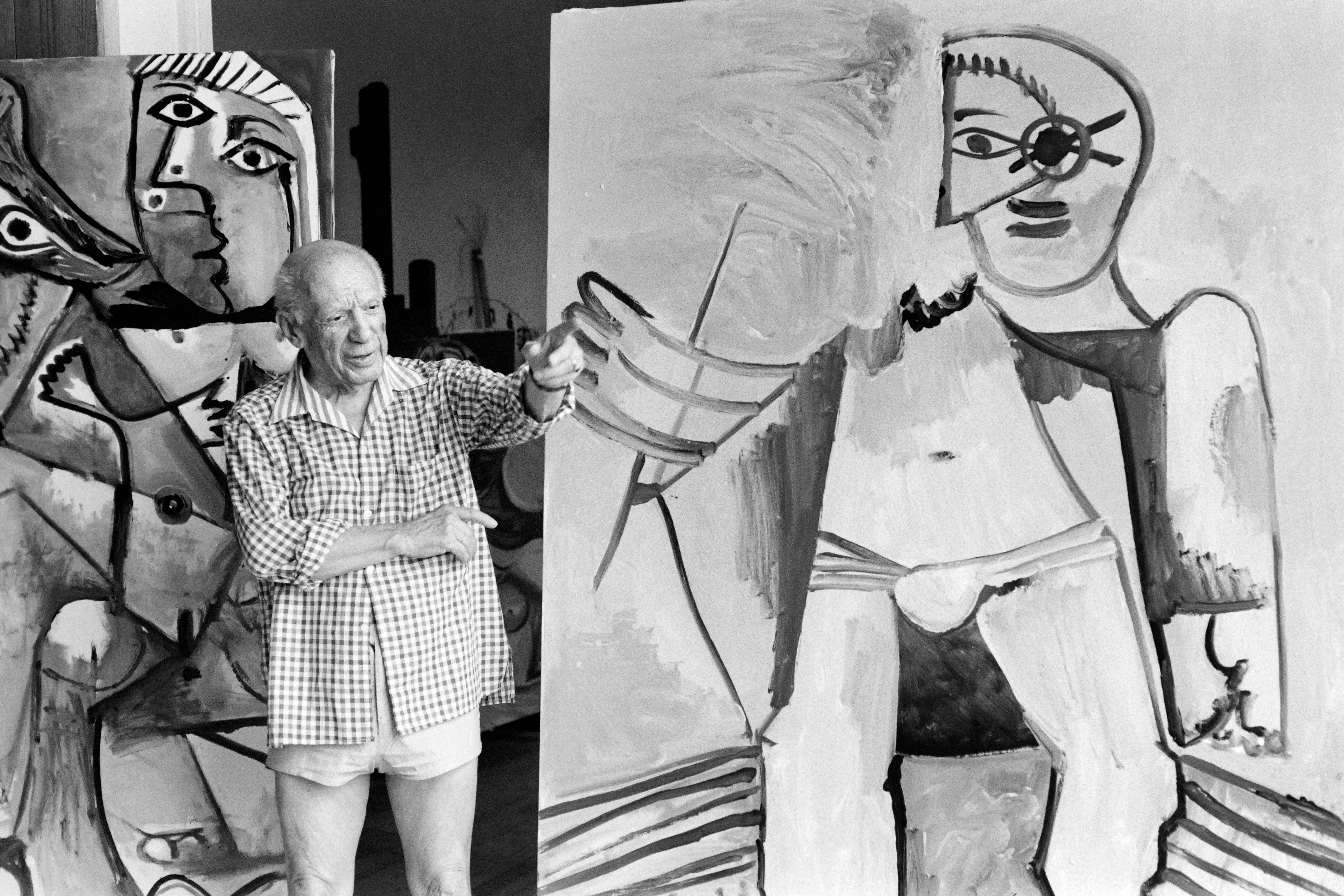 Another painting stolen in the same heist in January 2012, 'Stammer Windmill' by Dutch painter Piet Mondrian, was also found.

It was originally believed that two men broke in, cutting the paintings from their frames.

But cops said the suspect likely had no accomplices.

On the night of the heist, the burglar had allegedly set off an alarm by manipulating an unlocked door to send the sole guard elsewhere in the building.

The guard told police he had run after one thief, who dropped another Mondrian oil painting.

The theft, at the height of the Greek debt crisis, was followed a few months later by another high-profile robbery of nearly 80 archaeological artefacts from a museum in Olympia dedicated to the ancient Olympic Games. 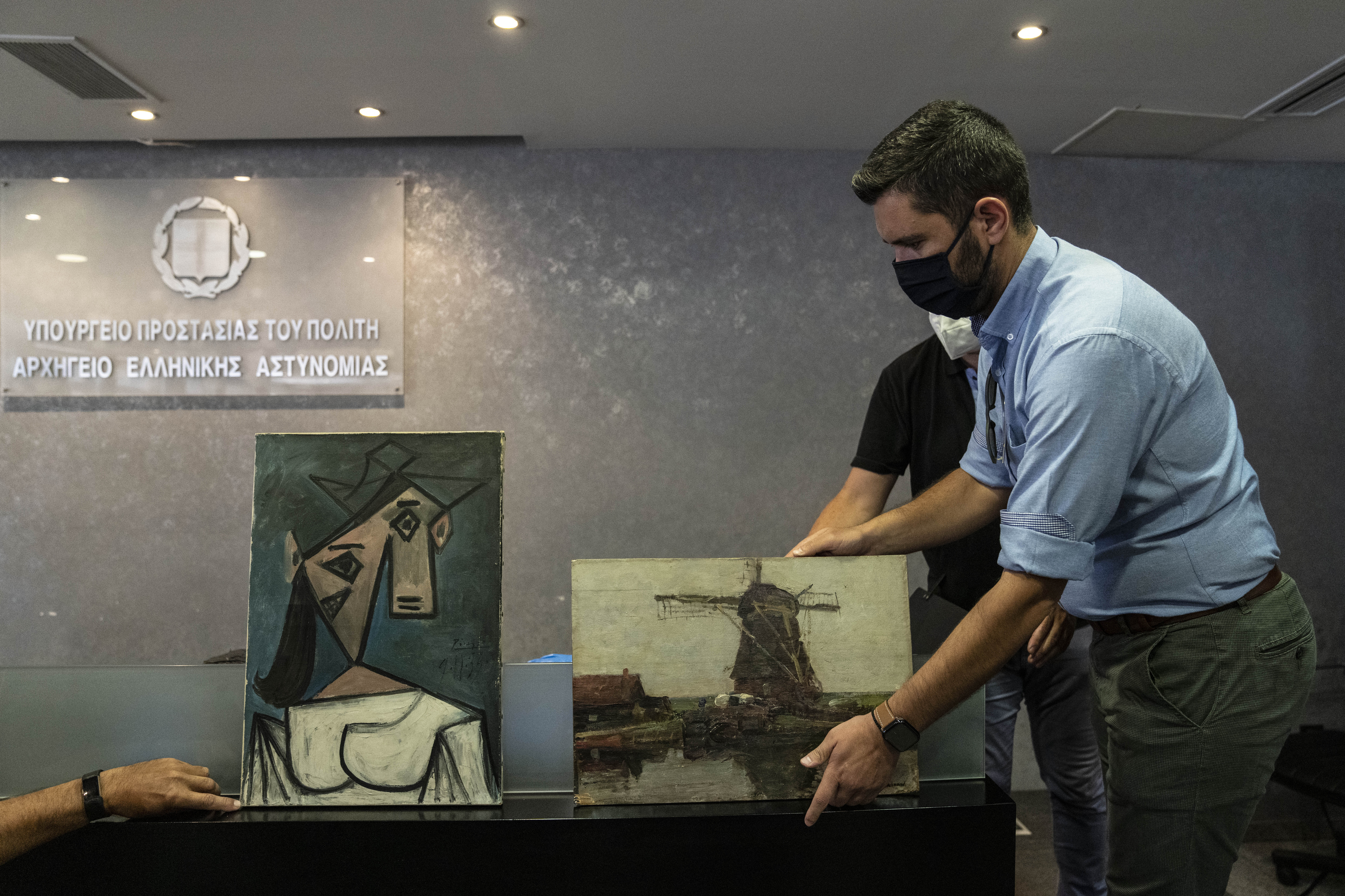 Greek media reports said police had brought the builder in for questioning following surveillance and he allegedly confessed, showing them where he had stashed the paintings.

The man, who is represented by one of Greece's leading criminal lawyers, reportedly claimed he was an art lover and did not intend to sell the paintings.

A sketch by 16th-century Italian artist Guglielmo Caccia, better known as Moncalvo, was also stolen in the same robbery.

But state TV reported it was damaged in the heist and chucked away.

A state report found that the gallery's security had not been upgraded for over a decade, with the then police minister slamming safeguards as "non-existent".

Several areas in the museum were out of range of security cameras, while the alarms were faulty and prone to ringing constantly.

Also, the gallery had reduced security at the time owing to a three-day staff strike.

The paintings will be exhibited once again in the National Gallery, which opened in March after nine years of renovation work.

The revamp was part of celebrations marking the 200th anniversary of the Greek War of Independence in Athens. 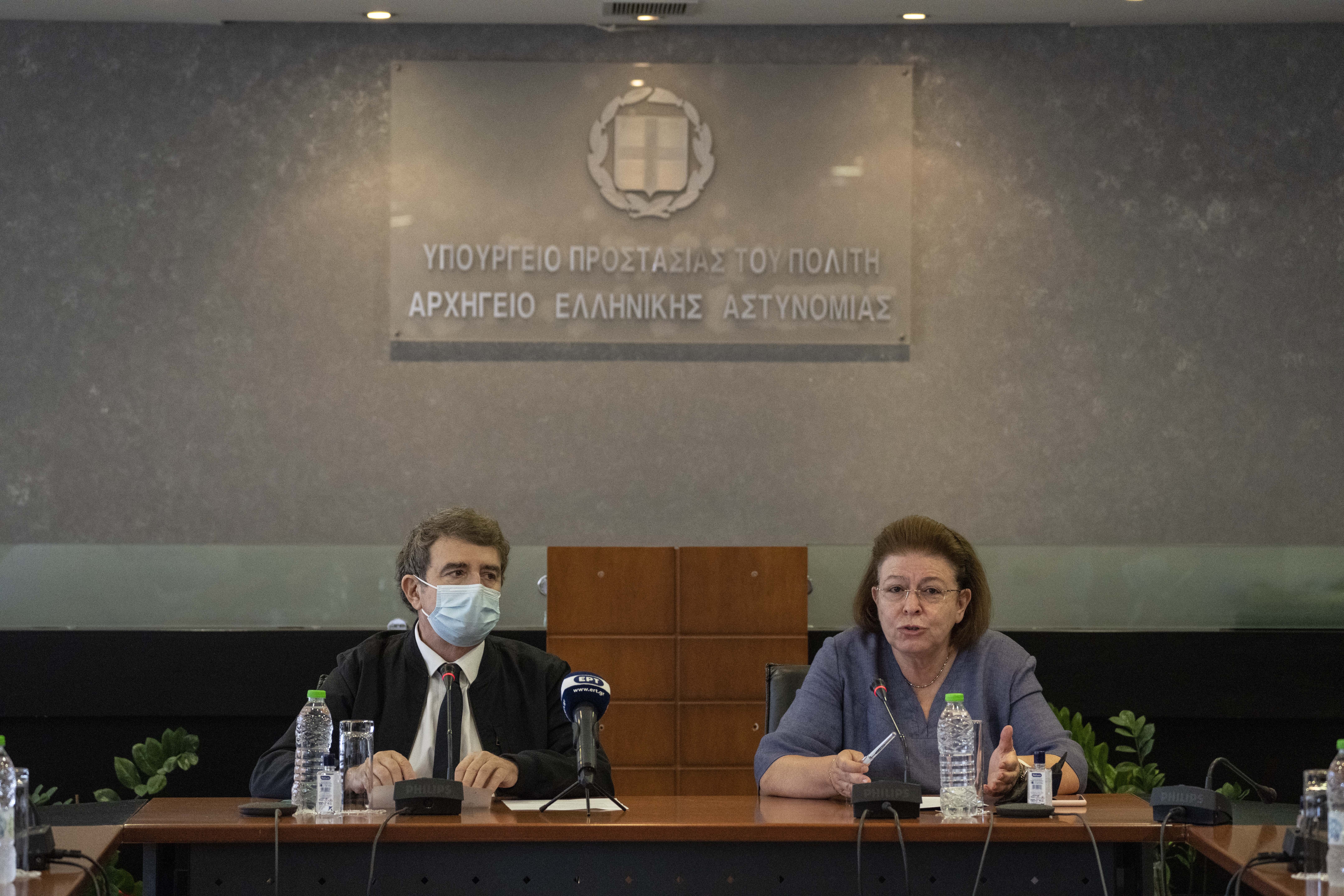 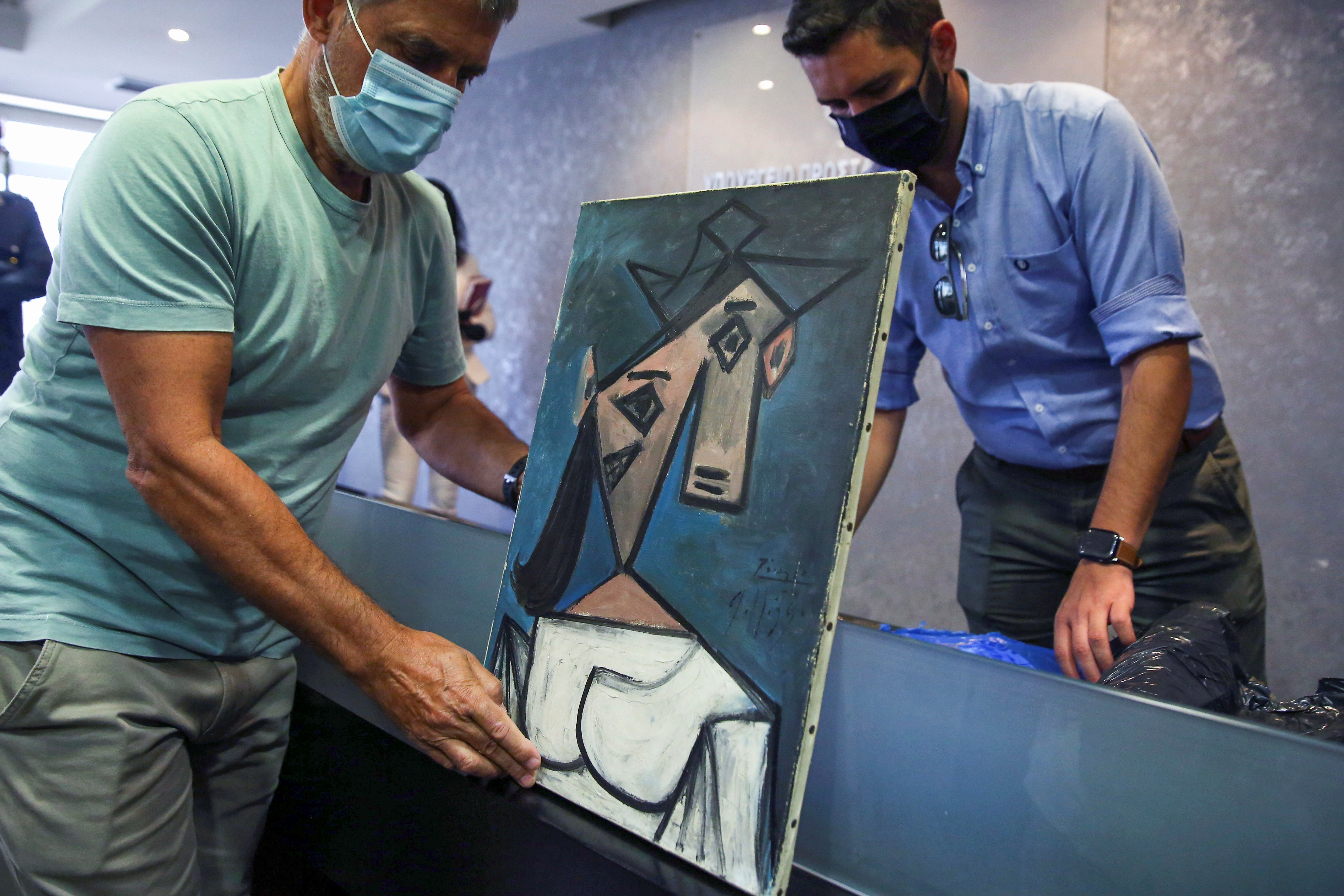 "In our new gallery, they will find the place they deserve," Citizens' Protection Minister Michalis Chrisochoidis told a joint news conference with Culture Minister Lina Mendoni.

"Picasso dedicated the painting to the Greek people," he said. "There was a Greek man who took it away. There were Greeks who brought it back."

Who was Pablo Picasso?

Arguably the most famous artist of the 20th century, Picasso was born in Spain, at Málaga, and received encouragement from his father, who was an artist and teacher, writes the National Gallery.

After a period in Barcelona he moved to Paris in 1904.

The early paintings of his so-called blue period changed to paintings in tones of pink and grey.

He experimented with everything from newsprint and napkins to decorative wallpaper, says the Royal Academy.

Picasso spent decades investigating printmaking techniques, sourcing rare and antique paper from as far as Japan – and all without losing his compulsion to draw on every last scrap.

Picasso, who is thought to have made roughly 50,000 artworks during his lifetime, was known to reuse canvases by painting over previous drawings.

The artist would typically scribble something in pencil before painting directly over it and incorporating the previous work into the new one.

Doodles hidden under Picasso masterpieces have been discovered.

In 2014, experts found a portrait of a mysterious man behind his painting of a bathing woman in The Blue Room.

Hidden sketches of landscapes penned by another artist have been found under Picasso's painting La Miséreuse Accroupie (otherwise known as The Crouching Beggar).

Classical art became an increasingly important influence on Picasso's art following a visit to Rome in 1917.

After years of poverty as a young artist in Barcelona, he had moved to Paris at the turn of the twentieth century and, by the early 1930s, was both celebrated and wealthy.

His later years – spent mainly in the south of France – saw him produce paintings and graphic art, sculpture and pottery.

Mendoni said the Picasso painting bore an inscription from the painter to the Greek people for their fight against fascism.

"That is the reason why it was impossible for the painting not only to be sold but also to be exhibited anywhere," she said.

The National Gallery holds a prominent collection of post-Byzantine Greek art, as well as a small collection of Renaissance works and some El Greco paintings.