A professor at the University of California in Los Angeles has been suspended and placed under police protection after he rejected his non-black students’ appeals for him to be lenient with his black students.

Gordon Klein, an accounting professor in the Anderson School of Business, where he has been teaching for 39 years, was suspended by the university for three weeks beginning on June 25.

The Malibu Police Department reportedly has an increased police presence outside Klein’s home after multiple threats, which were made after a student, Emilia Martinez, posted an email exchange online.

A petition to have Klein removed has gained almost 20,000 signatures. 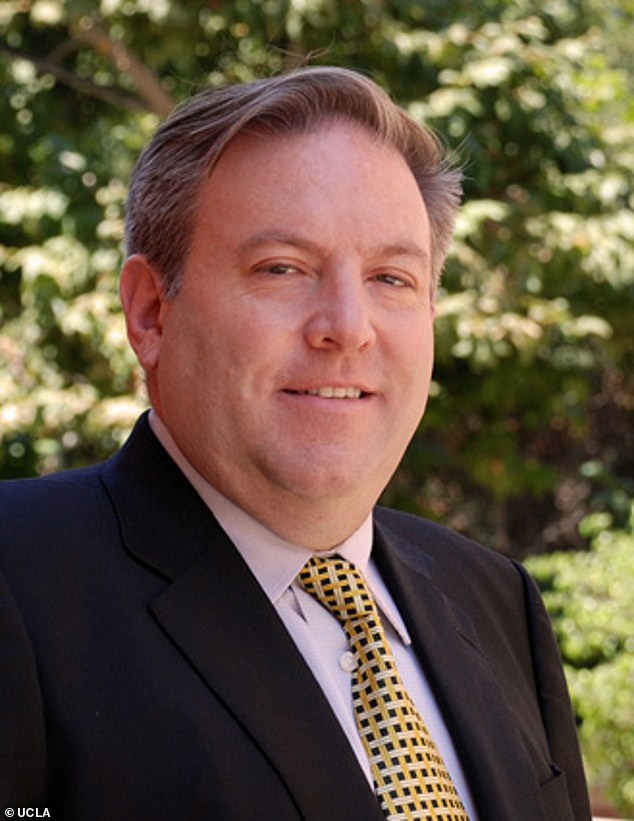 Gordon Klein, professor of accounting at UCLA’s Anderson School of Business, has been suspended for a ‘mocking’ email denying a request for leniency for black students

The petition seeks Klein’s firing as a result of his ‘extremely insensitive, dismissive, and woefully racist response to his students’ request for empathy and compassion during a time of civil unrest.’

The story began when a group of students, who described themselves as ‘non-black allies’ of their black peers, wrote to Klein asking for him to effectively cancel the final exams for black students.

They requested a ‘no-harm’ final exam that could only benefit students’ grades, and for shortened exams and extended deadlines for final assignments and projects.

The students wrote that, in light of recent ‘traumas, we have been placed in a position where we much choose between actively supporting our black classmates or focusing on finishing up our spring quarter’.

They continued: ‘We believe that remaining neutral in times of injustice brings power to the oppressor and therefore staying silent is not an option.’

They wrote, according to Inside Higher Education, that theirs was ‘not a joint effort to get finals canceled for non-black students, but rather an ask that you exercise compassion and leniency with black students in our major’. 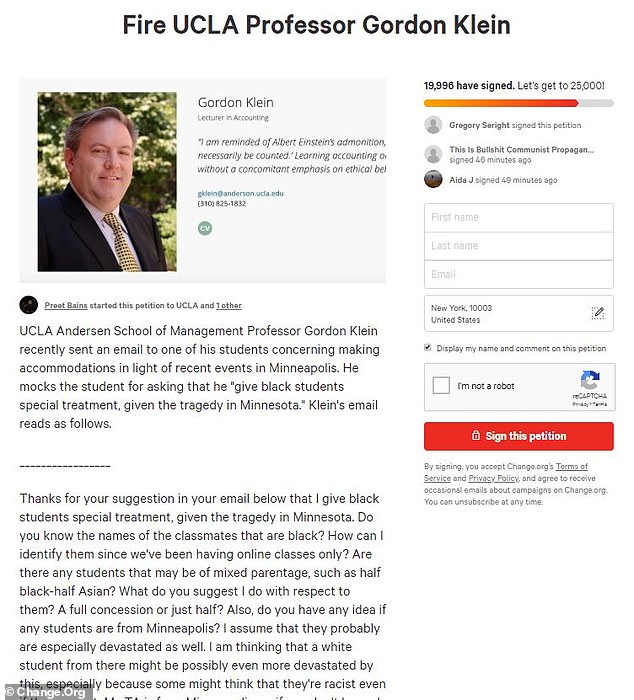 A petition to have Klein fired has gathered almost 20,000 requests. Klein has been suspended

Klein wrote back and declined their request, composing an email that some students felt was mocking them.

‘Thanks for your suggestion in your email below that I give black students special treatment, given the tragedy in Minnesota,’ he wrote.

‘Do you know the names of the classmates that are black? How can I identify them since we’ve been having online classes only?

‘Are there any students that may be of mixed parentage, such as half black-half Asian? What do you suggest I do with respect to them? A full concession or just half?’

Klein asked the students whether any of them – black or otherwise – were from Minneapolis, where George Floyd was killed by police on May 25, sparking a wave of protests.

‘I assume that they probably are especially devastated as well,’ he wrote.

‘I am thinking that a white student from there might be possibly even more devastated by this, especially because some might think that they’re racist even if they are not.

‘My TA (teaching assistant) is from Minneapolis, so if you don’t know, I can probably ask her.’

Klein asked how he was expected to implement the ‘no-harm’ exam, given the course was solely graded on the final exam.

And he ended with a quote from Martin Luther King.

‘One last thing strikes me: Remember that MLK famously said that people should not be evaluated based on the “color of their skin,”‘ he wrote.

‘Do you think that your request would run afoul of MLK’s admonition? Thanks, G. Klein.’

In a separate email to his entire class, Klein said that outside events, including personal hardship, do not necessarily relieve students of their responsibilities.

He gave the example of his daughter, who suffered a severe illness and lost close friends to suicide during her time at UCLA, but still completed course work.

‘Some students have asked that the final exam be delayed or changed or waived altogether,’ he told the class.

‘Life deals all of us challenges and I have no doubt that many of you are facing some now.

‘In a perfectly fair world, I would be able to take these individual factors into account and perhaps modify the terms in our course syllabus, but my understanding of university rules is that, with rare exceptions, I should not.’

Martinez, who posted the discussion online, was not one of the students who wrote to Klein, but said she was angered when a friend showed her the discussion.

‘I believed this information was important to bring to light because as a non-black POC, I believe it is my duty to amplify my black peers’ voices,’ she told the Washington Free Beacon.

‘I felt this was a very unreasonable response to a very valid request, and decided that the professor should be held properly accountable.’ 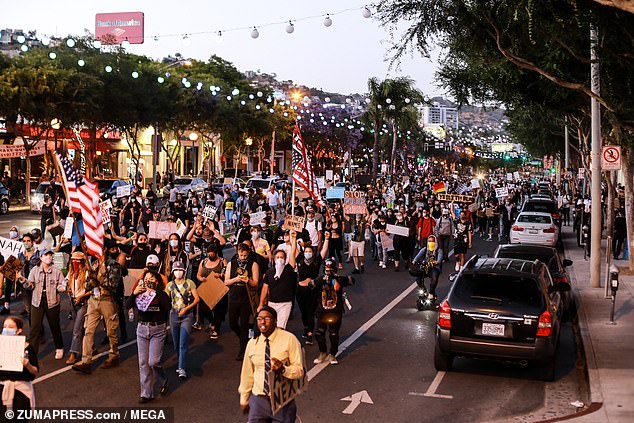 Protesters and police officers meet at a police road barricade on Santa Monica Boulevard in Hollywood on Sunday. An estimated 20,000 people attended the march 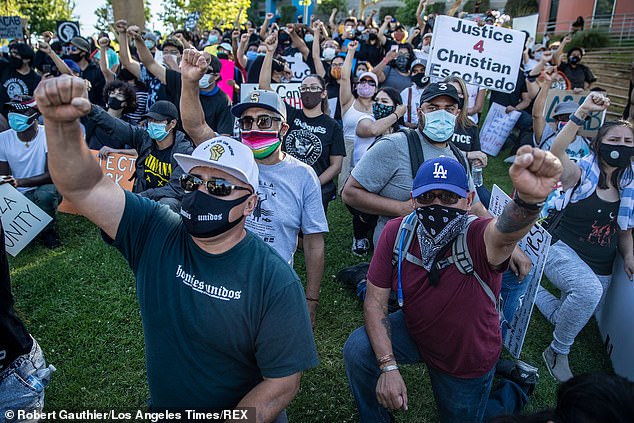 The dean of Anderson School of Business, Antonio Bernardo, agreed with Martinez.

He sent an email to students on Monday calling Klein’s behavior ‘troubling’.

He has also reportedly extended the time students have to complete exams given the ‘difficult circumstances’.

A spokesperson from the Anderson School of Management told Inside Higher Ed that the email from Klein was ‘deeply disturbing’.

‘Respect and equality for all are core principles at UCLA Anderson,’ the spokesman said.

‘It is deeply disturbing to learn of this email, which we are investigating.

‘We apologize to the student who received it and to all those who have been as upset and offended by it as we are ourselves.’

Other academics were concerned by UCLA Anderson’s actions, and sprung to Klein’s defense.

‘As a lecturer at a public institution bound by the First Amendment, Klein has significant rights to manage the content and direction of his course,’ she said.

‘His disagreement with the students’ reasoning does not amount to harassment or unlawful discrimination.’

‘Professor Klein is right. Treating students on the basis of equality is morally, ethically, and legally sound,’ he said.

‘The fact that his complaining student has gotten traction with her complaint is disturbing.’