MOSCOW (AP) — Russian troops launched a wide-ranging attack on Ukraine on Thursday, as President Vladimir Putin cast aside international condemnation and sanctions and warned other countries that any attempt to interfere would lead to “consequences you have never seen.”

Ukrainian border guards released footage of what they said were Russian military vehicles moving in, and big explosions were heard in the capital Kyiv, Kharkiv in the east and Odesa in the west. As the Russian military claimed to have wiped out Ukraine’s entire air defenses in a matter of hours, Ukrainians fled some cities and European authorities declared Ukrainian air space an active conflict zone.

Governments from the U.S. to Asia and Europe readied new sanctions after weeks of failed efforts for a diplomatic solution — but global powers have said they will not intervene militarily to defend Ukraine.

Ukrainian President Volodymyr Zelenskyy declared martial law, saying Russia has targeted Ukraine’s military infrastructure. Ukrainians who had long braced for the prospect of an assault were urged to stay home and not to panic even as Ukrainian authorities reported artillery barrages and airstrikes on targets around the country.

After weeks of denying plans to invade, Putin justified his actions in an overnight televised address, asserting that the attack was needed to protect civilians in eastern Ukraine — a false claim the U.S. had predicted he would make as a pretext for an invasion. He accused the U.S. and its allies of ignoring Russia’s demands to prevent Ukraine from joining NATO and for security guarantees. He also claimed that Russia does not intend to occupy Ukraine but will move to “demilitarize” it and bring those who committed crimes to justice. 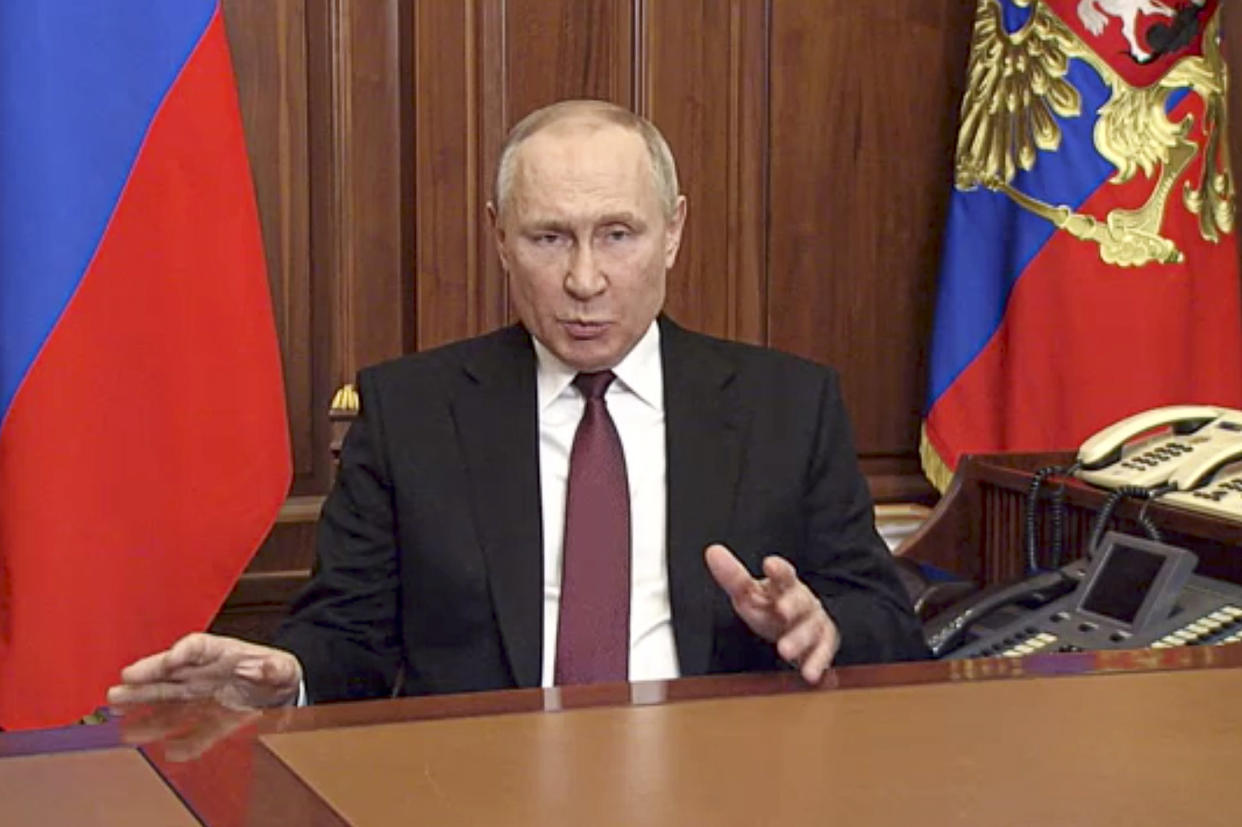 Oleksii Arestovich, an adviser to Zelenskyy, said that Russian troops have moved up to 5 kilometers (3 miles) into the Ukrainian territory in the Kharkiv and Chernihiv regions, and, possibly in other areas.

President Joe Biden pledged new sanctions to punish Russia for the aggression that the international community had expected for weeks but could not prevent through diplomacy.

Putin justified it all in a televised address, asserting that the attack was needed to protect civilians in eastern Ukraine — a false claim the U.S. had predicted he would make as a pretext for an invasion. He accused the U.S. and its allies of ignoring Russia’s demands to prevent Ukraine from joining NATO and for security guarantees. He also claimed that Russia does not intend to occupy Ukraine but will move to “demilitarize” it and bring those who committed crimes to justice.

Biden in a written statement condemned the “unprovoked and unjustified attack,” and he promised that the U.S. and its allies would “hold Russia accountable.” The president said he planned to speak to Americans on Thursday after a meeting of the Group of Seven leaders. More sanctions against Russia were expected to be announced Thursday.

Ukraine’s Foreign Minister Dmytro Kuleba described the assault as a “full-scale invasion” and said Ukraine will “defend itself and will win. The world can and must stop Putin. The time to act is now.”

In the capital, Kyiv Mayor Vitaly Klitschko advised residents to stay homeunless they are involved in critical work and urged them to prepare go-bags with necessities and documents if they need to evacuate. An Associated Press photographer in Mariupol reported hearing explosions and seeing dozens of people with suitcases heading for their cars to leave the city.

“We are facing a war and horror. What could be worse?” 64-year-old Liudmila Gireyeva said in Kyiv. She planned to head to the western city of Lviv and then to try to move to Poland to join her daughter. Putin “will be damned by history, and Ukrainians are damning him.”

The Russian Defense Ministry said it was not targeting cities, but using precision weapons and claimed that “there is no threat to civilian population.”

Zelenskyy urged global leaders to provide defense assistance to Ukraine and help protect its airspace from the “aggressor.” The European Union Aviation Safety Agency told air operators of a high risk to civilian aircraft over Ukraine, reminding air operators that “this is now an active conflict zone.”

After the initial explosions in Kyiv, people could be heard shouting in the streets. Then a sense of normality returned, with cars circulating and people walking in the streets as a pre-dawn commute appeared to start in relative calm.

The consequences of the conflict and resulting sanctions on Russia started reverberating throughout the world.

World stock markets plunged and oil prices surged by nearly $6 per barrel. Market benchmarks tumbled in Europe and Asia and U.S. futures were sharply lower. Brent crude oil jumped to over $100 per barrel Thursday on unease about possible disruption of Russian supplies. The ruble sank 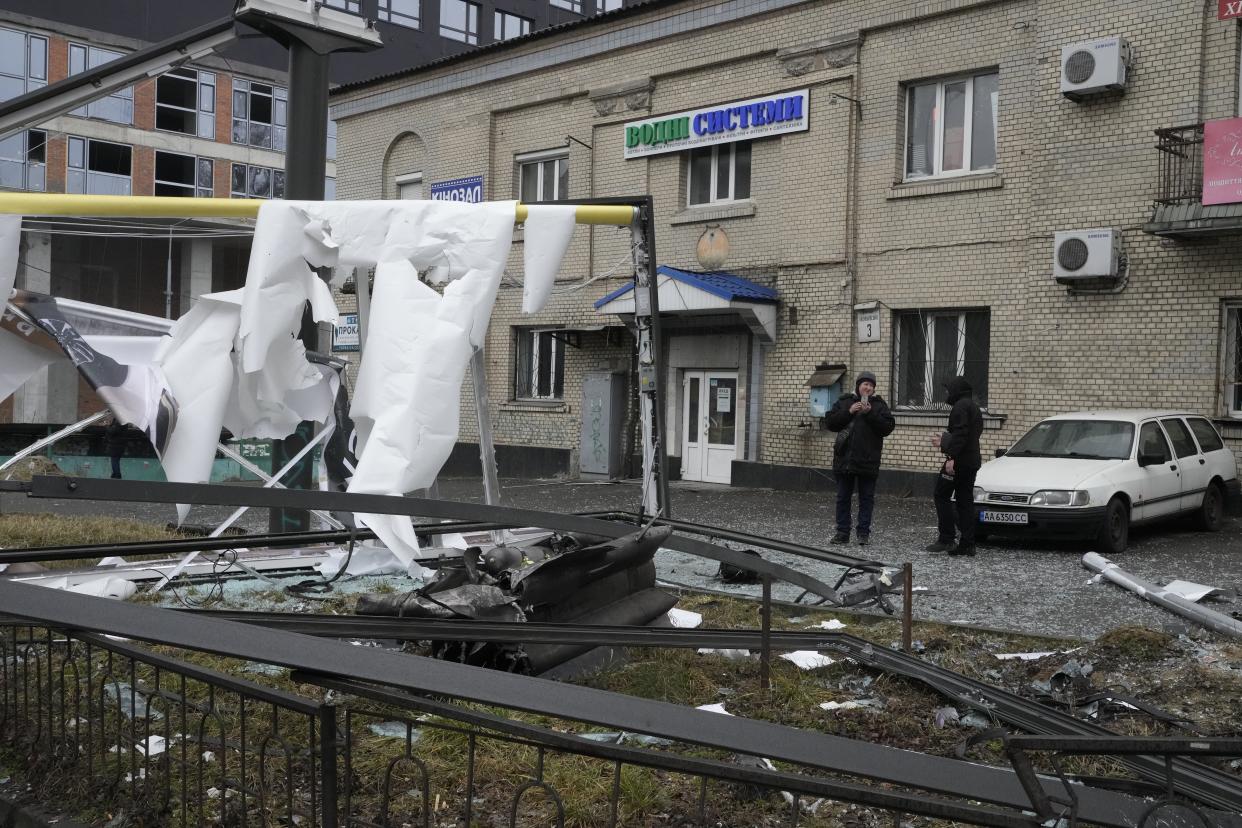 Anticipating international condemnation and countermeasures, Putin issued a stark warning to other countries not to meddle, saying, “whoever tries to impede us, let alone create threats for our country and its people, must know that the Russian response will be immediate and lead to the consequences you have never seen in history.”

In a stark reminder of Russia’s nuclear power, Putin warned that “no one should have any doubts that a direct attack on our country will lead to the destruction and horrible consequences for any potential aggressor.”

Though the U.S. on Tuesday announced the repositioning of forces around the Baltics, Biden has said he will not send in troops to fight Russia.

Putin’s announcement came just hours after the Ukrainian president rejected Moscow’s claims that his country poses a threat to Russia and made a passionate, last-minute plea for peace.

“The people of Ukraine and the government of Ukraine want peace,” Zelenskyy said in an emotional overnight address, speaking in Russian in a direct appeal to Russian citizens. “But if we come under attack, if we face an attempt to take away our country, our freedom, our lives and lives of our children, we will defend ourselves. When you attack us, you will see our faces, not our backs.”

Zelenskyy said he asked to arrange a call with Putin late Wednesday, but the Kremlin did not respond.

In an apparent reference to Putin’s move to authorize the deployment of the Russian military to “maintain peace” in eastern Ukraine, Zelensky warned that “this step could mark the start of a big war on the European continent.”

“Any provocation, any spark could trigger a blaze that will destroy everything,” he said.

He challenged the Russian propaganda claims, saying that “you are told that this blaze will bring freedom to the people of Ukraine, but the Ukrainian people are free.” 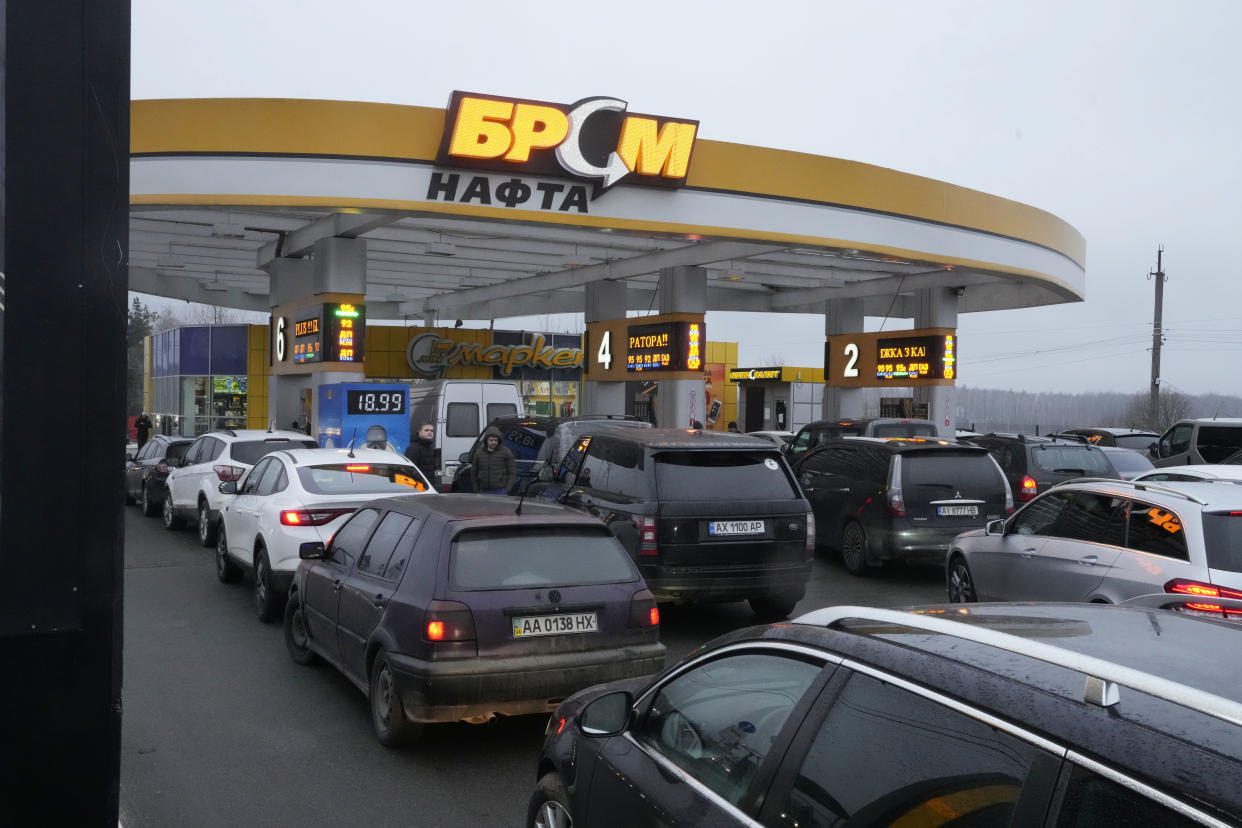 At an emergency meeting of the U.N. Security Council called by Ukraine because of the imminent threat of a Russian invasion, members still unaware of Putin’s announcement appealed to him to stop an attack. U.N. Secretary-General Antonio Guterres opened the meeting, just before the announcement, telling Putin: “Give peace a chance.”

“In these dark hours, our thoughts are with Ukraine and the innocent women, men and children as they face this unprovoked attack and fear for their lives,” they said on Twitter.

Even before Putin’s announcement, dozens of nations imposed sanctions on Russia, further squeezing Russian oligarchs and banks out of international markets.

The Russian Foreign Ministry has shrugged off the sanctions, saying that “Russia has proven that, with all the costs of the sanctions, it is able to minimize the damage.”

The threat of war has already shredded Ukraine’s economy and raised the specter of massive casualties, energy shortages across Europe and global economic chaos.