A Current Affair reporter Seb Costello has been handed a fine and good behaviour bond and will probably avoid a criminal record following a verbal altercation with two neighbours in a parking dispute.

Police agreed to his application for a diversion at the Neighbourhood Justice Centre in Collingwood on Thursday. Costello was accused of being involved in an altercation with the pair, aged in their early 20s, near Boyd Street about 9.30am on February 11. 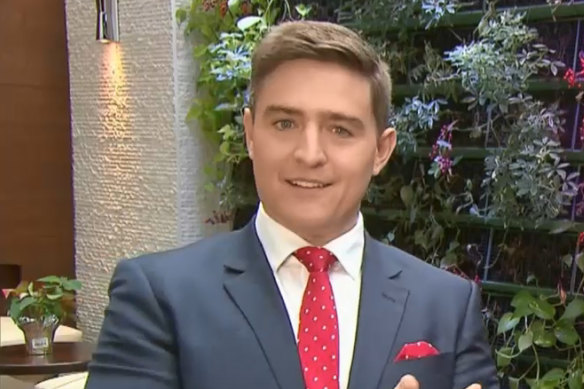 Seb Costello was involved in a verbal altercation with neighbours over a parking dispute.Credit:ninevms

The court heard that Costello, 35, entered into a verbal altercation after a neighbour loading a car obstructed a laneway that led to the parking garage connected to his home in Richmond. Police said Costello got out of the car and rang the doorbell.

They alleged that the owner of the car agreed to move it and after this, Costello walked from the footpath to the front door to remonstrate with the neighbours, which police said “placed them in fear of an assault”.

Costello then left the area. The neighbours took pictures of his car and reported the incident to police. It was not alleged that Costello physically assaulted any of the parties.

Costello’s lawyer, Sam Norton, argued that his client was a good candidate for a diversion, a measure that moves the charges out of the court system and which will result in no criminal record for Costello if he abides by the conditions.

Norton said Costello was community minded and engaged in charitable organisations, and was otherwise a stable member of society.

“I don’t think it is likely he is going to be back before a court again,” magistrate Noreen Toohey said.

Norton also applied for a suppression order to restrain reporting of the case, arguing that publicity of the diversion would unfairly prejudice the administration of justice by drawing further attention to Costello’s charges. Toohey rejected the application.

Costello received a fine of $750 and a good behaviour bond for six months. He nodded and said thank you.

Costello is the son of Peter Costello, the former federal treasurer and chairman of Nine, the owner of this masthead.

Seb Costello, who formerly worked as a foreign correspondent, was dressed in a blue suit and was seated behind his lawyer for the duration of Thursday’s hearing.

The high-profile reporter did not stop to provide a statement to journalists outside the centre.

He made headlines in July when former AFL agent Ricky Nixon appeared to hit the reporter in the face on camera as he questioned Nixon about his intravenous infusions business.

In the footage, shared online by A Current Affair, Costello can be heard asking Nixon: “What are these IV infusions about? How do you actually create skin brightening for somebody?”

Moments later, the footage captures Nixon turning around and striking the reporter in the face with his arm.