Jerusalem: Israeli airstrikes hit several sites in Gaza for the second time in three days, after Palestinian militants sent incendiary balloons into farmland in southern Israel for the third day in a row.

There were no reported casualties on Thursday night (Friday AEST) in either Israel or Gaza, but the exchange raised the spectre of a return to full-scale conflict for the first time since an 11-day air war ended nearly a month ago.

The Israeli army said it had targeted military compounds and a rocket launching site near Gaza City and Khan Younis, two of the biggest cities in the strip, shortly before midnight Thursday local time. A Hamas-linked media outlet in Gaza reported hits on sites near Gaza City and Khan Younis, as well as in Jabalia, a town in the north of the strip. 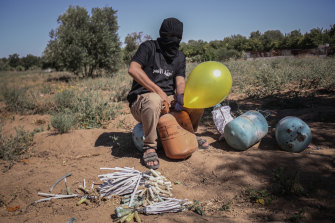 A masked Palestinian supporter of the Al-Nasir Salah Al-Din Brigades prepares incendiary balloons to launch across the border fence east of Gaza city towards Israel.Credit:Getty

About an hour later, early Friday morning, sirens sounded in areas of southern Israel close to Gaza, a warning that the Israeli military said was prompted by gunfire from militants in Gaza, not rockets, which might have led to an even more forceful Israeli response.

The Israeli airstrikes followed attempts by militants in Gaza to set fires in Israeli farmland surrounding the strip. Militants sent balloons attached to incendiary devices over the perimeter fence. Eight fires were reported Thursday, in addition to scores earlier in the week.

Analysts and diplomats are sceptical that either Hamas or Israel wants a repeat of the war in May. Israel’s new government is barely a few days into its term, while Hamas is still counting the cost of the damage caused last month. The chief of staff of the Israeli army, Aviv Kochavi, is still planning to visit counterparts in the United States this weekend.

“If there had been an appetite to upscale and uptick, it would have happened already,” Tor Wennesland, the United Nations special coordinator for the Middle East peace process, said in a phone interview.

But while the exchanges stopped short of a full-scale escalation, they underscored the fragile nature of the cease-fire that followed the air war in May.

The new Israeli government does not want to appear weak and is trying to differentiate itself from Benjamin Netanyahu’s administration, which it replaced Sunday. Netanyahu tended to ignore the balloons, whereas his successors want to show that the balloons will be met by a military response.

“What was is not what will be,” said a Defence Ministry official this week.

Hamas is reluctant to let recent behaviour by the Israeli police and far-right activists in Jerusalem, which many Palestinians considered offensive and provocative, to pass uncontested. 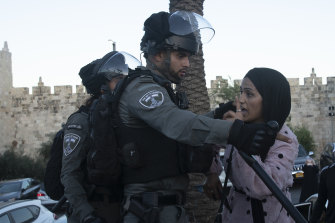 An Israeli border police officer faces off with a Palestinian woman at a protest at the Damascus Gate to the Old City of Jerusalem Thursday, June 17, 2021. Credit:AP

Despite mediation by Egyptian and UN officials, Hamas and Israel have yet to conclude a lasting cease-fire agreement.

In Gaza, reconstruction of thousands of homes, clinics, schools and major infrastructure systems has barely begun, with a damage assessment yet to be completed by Egypt and the UN. Israel is still blocking the import and export of most items, including millions of dollars in aid from Qatar, on which the Gazan economy depends.

For years, an Israeli and Egyptian blockade has limited what comes in and out of Gaza, while Israel controls Gaza’s airspace, access to water, cellular data and birth registry, and prohibits Palestinian access to farmland at the edge of the strip.

Talks on a new reconstruction arrangement have stalled over disagreements of the role that the Palestinian Authority should play in managing the efforts. Hamas forced the authority from Gaza in 2007 and it now administers only parts of the occupied West Bank.

Hamas is also seeking to include in the agreement the release of hundreds of Palestinians held in Israeli jails. Israel wants Hamas to hand over two missing Israeli citizens and the remains of two Israeli soldiers.

More than 8,000 remain homeless after their homes were destroyed in the war, with some living in classrooms of a UN-run school in Gaza City.

“The war will be over when I leave this place,” a newly homeless man, Mohammad Gharbain, 36, said in an interview at the school on Wednesday. “The war still goes on as long as I am here.”